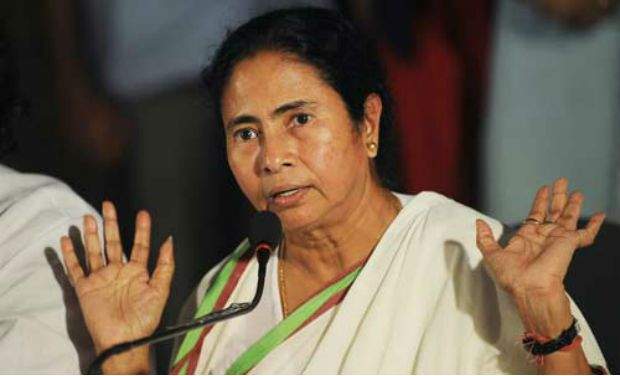 New Delhi: West Bengal chief minister Mamata Banerjee on Wednesday (October 25) accused the BJP of unleashing an “autocratic rule and destroying the federal structure” of the country and opposed linking of Aadhaar with mobile phone number.

She alleged that the BJP was trying to finish off all other parties in the country and said that the Trinamool Congress would play a role in ousting it from power at the Centre.

“They [the Centre] are interfering in the people’s rights and privacy. The Aadhaar number should not be linked with one’s mobile phone,” the West Bengal chief minister said. ”

“I will not link my Aadhaar number with my mobile even if my connection is snapped,” she said at the extended core committee meeting of the Trinamool Congress here.

Claiming that though her party did not want to be in power at the Centre, Trinamool Congress will play a vital role in removing the saffron party from power in the next general elections.

Banerjee asked her party leaders to start ‘black day’ campaign from November 8 in every block and district in the state condemning demonetisation which was announced on that day last year.

“A lot of people are not happy with the way the BJP-led NDA government is functioning. Our job will be to help them in defeating the BJP and save the country from dictatorship,” she said.

The chief minister added: “They [the BJP] are trying to destroy the federal structure of the country. And if somebody dares to speak up against them, they try to brand them as corrupt as if they [ the BJP] are only saints and others are thieves.” She said the Trinamool Congress would fight and not stop till the BJP was “ousted” from power. “Democracy will triumph against all odds,” she said.

“They are doing whatever they like,” she said, noting that the TMC has not been elected at anybody’s mercy and it has emerged stronger through its long struggle.

Banerjee added that, “They [the BJP] can threaten us by using the ED, Income Tax and CBI but we are not afraid of it. The central government has turned into a government of the agencies. They can send all our leaders to jail but we will continue to oppose the anti-people policies of the central government.”

Alleging that the BJP was using central agencies since assuming power at the Centre, Banerjee said, “But it will boomerang on them when they will be out of power”.

Terming demonetisation as a “big scam”, she said the entire economy has “gone for a toss” due to the arbitrary decision of the central government.

“First demonetisation and then the GST (Goods and Services Tax), both have ruined the Indian economy. Thousands of people have lost their jobs. More than 50% of the small-scale industry is yet to get uplinking facilities for GST,” the chief minister alleged.

The Trinamool Congress chief also charged the Modi government with snatching away the freedom of the press and alleged that if any news organisation dared to speak against it, they were harassed.

“The ED, CBI and Income Tax departments will be used to harass them [news organisations],” she said.

This, however, is not the first time that the West Bengal CM has spoken up against the ruling party or defied its directives. In August, Banerjee instructed the state’s schools and other educational institutions to ignore the central government’s directives on celebrating Independence Day as well as on building “mass fervour” around the prime minister’s ‘New India Mission.’

Just days after that, on August 19 Banerjee said that “super dictatorship” was going on in the country but there will be change in 2019. She had at the time also slammed the Modi government for hampering the country’s economy and disturbing industries by introducing the note ban. “Everyday they disturb the industry. Just look how many industrialists have left the country after the GST and demonetisation,” she said.

The scheme – which has been proposed by PM Modi – is among the central programmes on the Centre’s agenda nowadays.