In what way does the alliance with the ISF in West Bengal threaten the secular future of India, so long as that party remains aligned with the Congress and the Left, and so long as its allegiance to the constitution remains its political bedrock? 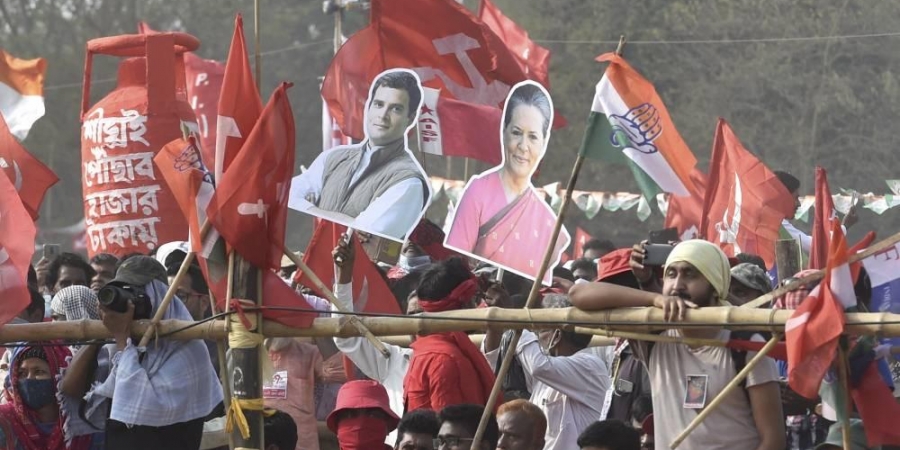 Senior leaders of the Indian National Congress off and on make mention of the legacy left for the republic by M.K. Gandhi and Nehru.

Minority communalism never has any prospect of capturing the state; it remains a bonding to defend and further the livelihood interests of the community. Ideologues of majority communalism remain explicit in claiming that India, notwithstanding the Constitution, is a Hindu nation; and, indeed, ought to be formally recognised to be a “Hindu state”.

As to Gandhi’s legacy – he spoke of Hindus and Muslims as his two eyes, and refused to accept a future wherein the two communities were not partners in nation-building.

In order to ensure, for example, the full participation of Indian Muslims in the non-cooperation movement against colonial rule, he did not hesitate to support the call for the preservation of the Caliphate. Post Independence, he was willing to offer the prime ministership of the new India to Mohammed Ali Jinnah, if that would avert the Partition.

In recent times, as the hold of the grand old party among the populace began to weaken, along came the Antony Committee Report which suggested that a chief reason was that the Congress had come to be viewed as inimical to Hindus and slanted towards Muslims.

Nehru’s prophetic words began to find ominous expression among sections of the Congress, as an ideologically confused and insecure party now began to emulate the right-wing’s appeasement of the majority community, including making open genuflections to overtly religious observances as part of a political recovery plan.

Whereas in some regions, Muslim citizens continued to find acceptance, like the rest of citizens, with some regional parties, the shift in the political moorings of the Indian National Congress had the effect of leaving Muslim Indians without a secular-constitutional anchor at the national level.

No wonder then that the need began to be felt among them to float political outfits that, while remaining wedded to the constitution, foregrounded community concerns, much as various caste formations within the Hindu community had always done. This new group assertion by Muslims, predictably, came to be maligned as “communalism” by the right-wing, till this erroneous construction of Muslim assertion, as Nehru had anticipated, also began to seep into the polity generally, urban polity especially, as the correct reading of modern Indian politics. Once the right-wing achieved this penetration, propagation followed that sought to dub Muslims, in subtle and not-so-subtle ways, as enemies of the nation.

Even the Congress began to relegate the watershed findings of the Sachar Committee as peripheral to its concerns of uplifting the community to the living standards even of Dalit Indians.

Having lost its customary hegemony over the poor among Hindu castes, and perhaps coming to view the folly of the party’s flirtation with majority communalism in the interim, there seems a new stirring among younger leaderships of the party which now seeks to regain its lost credibility among Muslim Indians.

Yet, a senior voice – from a Congressman deeply literate in the history both of the freedom movement and of the party, and of impeccable secular credentials – has come up to say that the party’s alliance with the Indian Secular Front led by a Muslim cleric in West Bengal is a communal turn of events, one that in his view would have pained Gandhi and Nehru.

Note the irony: the fact that India’s most populous state is run by an active Hindu priest aligned to a religious Muth, one who wears saffron to office, seems no longer to cause any raising of eyebrows, as the idea of India as a Hindu nation essentially seems to have found sub-liminal acceptance.

Nor, for example, have any senior voices been heard on the circumstance that a member of the Hindu Mahasabha, and a devotee of Gandhi’s assassin, has been admitted to the Indian National Congress in Madhya Pradesh.

Is it any wonder then that this lurch of mainstream secularism towards a rightwing emphasis should yield the politics of, for example, the AIMIM? Another matter that the leader of the AIMIM nonetheless never tires of affirming his allegiance to the constitution and seeks redress explicitly only within the framework of citizen’s rights enshrined in that authorising document remains equally disregarded by most mainstream parties, Congress included, whose interest dictates that this party also be characterised as a communal Muslim outfit, despite the other fact that it fields Hindu candidates as well wherever it participates in the electoral process. A stark contrast to the ruling BJP, which most of the time neglects to field any Muslim candidates.

Also read: Bengal: As Left and Congress Ally With Muslim Cleric’s Party, Will BJP Be the Winner?

It is true that Abbas Siddiqui, leader of the Indian Secular front, has once or twice made comments which can be characterised as retrograde in social terms and intemperate vis-à-vis mainstream democratic politics, such as his sexist observations about the Trinamool Congress MP Nusrat Jahan, and his invocation of viruses to punish the guilty. Yet such aberrations may not measure up to averments of like nature made dime a dozen by scions of the right-wing from time to time. Clearly, Siddiqui’s plunge into secular-mainstream politics may be the anodyne that teaches him to pursue the sobrieties demanded by democratic processes and practices. Exclusion, on the other hand, has always tended to exacerbate frustrated rage among those who feel left out of national concerns and priorities.

The question may be asked: in what way does the alliance with the ISF in West Bengal threaten the secular future of India, so long as that party remains aligned with the Congress and the Left, and so long as its allegiance to the constitution remains its political bedrock? Further, can this alliance be viewed as more deleterious than the prospect of a right-wing takeover of that key state?

And if organised Muslim interests endorsed by the secular constitution are to be shunned, and the community overall made a pariah, how is that Hindu-Muslim unity of which Gandhi and Nehru spoke to be re-established? Is it to be thought, especially by the Indian National Congress, that a community some 140 crore in number, or more, may be now be relegated without damage to the republic?

It is to be hoped that as the grand old party introspects its current predicament, these questions will regain their due importance in the considerations of the party that made possible a freedom movement to which Indian Muslims contributed rather more than the right-wing.

Such reconstruction of the republic requires bold and principled reorientation in mainstream secular formations, without sheepishness or fear of incurring short-term opprobrium from predictable sections of the social order.

And, if such reconstruction is not undertaken with conviction and perseverance, the republic itself may have a shorter life than we imagine or wish to admit to the collective psyche.