In Uluberia and Bagnan, some sections of voters feel that anger with TMC need not translate to a vote for BJP. Others say TMC's schemes helped quell discontent over Amphan corruption. Uluberia: Drums, music, saffron balloons, flowers and a decorated tableau marked a rally by Uttar Pradesh Chief Minister Adityanath – one of the star campaigners for the Bharatiya Janata Party – in support of Pratyush Mondal.

Mondal is the candidate of the Uluberia Purba (East) constituency in Howrah district.

About a thousand people, mostly young, participated in the rally. Pintu Nayak, 27, a resident of Chengail said, “I came here to see Yogi ji.” When asked what about Adityanath drew him, Nayak said, “He speaks like a Hindi-cinema hero.”

When asked if he is going to vote for BJP this time, he said, “Let’s see.”

Another BJP supporter, Nishikant Pandey, said, “Mondal will win Uluberia Purba seat with a large margin.” When asked what made him think so, Pandey laughed and said, “I am not a local. I came here from Uttar Pradesh.”

The reporter stopped a group of youngsters who said, “The crowd is definitely more than 600.” Sagar Hazra, a resident of Basudebpur gram panchayat intervened and said, “What 600? Are you mad? There will easily be 10,000 people. Don’t listen to him.”

Twenty-seven-year-old Hazra runs a shop owned by his father. When asked why he supports BJP, he said, “Because of Hindutva. This time the vote is only for Hindutva and nothing else. The lungibahini took control over our city and state after the Citizenship Amendment Act was passed. They burned and ransacked government properties. How can we let that happen? The current government only helps them do all this.”

Lungibahini refers to Muslim refugees who have arrived from Bangladesh, among whom some men wear a traditional garment called a lungi.

For the last eight years, Hazra has attended Rashtriya Swayamsevak Sangh’s shakhas and milans in his village. Hazra said, “This country is only for Hindus. But it is shameful that in our own country Hindus are living as second class people. In West Bengal, we can’t celebrate Durga Puja, can’t celebrate Saraswati Puja. We must put an end to this, so this government must go now.”

Uluberia Purba seat has become an interesting constituency to watch. Trinamool Congress gave a ticket to veteran Mohun Bagan footballer Bidesh Bose to mitigate infighting within the party. TMC’s Haider Aziz Safwi was the MLA from this constituency until his death in 2019. Later, Idrish Ali of TMC won the seat in the by-election. One of the most known TMC faces in the region and former vice-chairman of Uluberia municipality, Abbasuddin Khan, switched over to the newly formed Indian Secular Front (ISF) as he was denied ticket by the TMC. ISF made Khan the candidate from this seat which is likely to throw a challenge to the incumbent party.

The Wire visited Bagnan, a rural constituency from the Howrah district. Pretish Jana of Haturia 2 gram panchayat said, “TMC will win this seat no matter what. The MLA has worked for the people. He is a strong organisation man.” When asked about BJP, Jana said, “BJP is also growing here, they will give a good fight, but ultimately TMC will win.”

A large section of people appear angry with the state government’s corruption and the irregularities in compensating people in the aftermath of Amphan.

Sabir Ali Khan said that betel leaf farm was completely destroyed but he is yet to get any compensation, almost a year since the cyclone. “The government said they will give us some money but I didn’t get a single paisa.” When asked if anyone in his village received compensation, Khan said, “Some have got, but double the number have not.”

Also read: Bengal: 3 Months After Amphan, Victims in North 24 Parganas Yet To Get Compensation

Mahabir Dhara of Bagnan 1 gram panchayat said, “First the lockdown broke us. Then Amphan took everything.”

Four months after the cyclone, Dhara got Rs 5,000 from the panchayat. “With Rs 5,000, one can’t even repair the structure for growing betel leaves,” he said.

But Dhara feels that there are other poll issues too, and not just the question of compensation. “There has been development. Roads are good now; we are getting proper drinking water. My daughter was benefited by Kanyashree. No one can say Didi hasn’t worked,” he said.

Gautam Roy of Khalore gram panchayat feels differently. “The government only looted money. Not a single person who was affected during the cyclone received the money,” he said. Roy feels that people wish to oust the government.

Rajesh Batabyal, a resident of Bangan assembly who owns a shop in Uluberia bazar said, “Bagnan will have a tough fight this time. Although the MLA has worked during Amphan and lockdown, they didn’t help anyone. On the contrary, BJP helped so many villagers during lockdown.”

When asked how BJP helped during the lockdown, Batabyal, in his mid-thirties, said, “They used to give us cooked food every day. At least for a month they continued that.”

Batabyal says that he did not recognise the people who ran the canteen, which did not have the BJP flag. “They were not from the area. Came from outside. But they have Bharat Mata photos, so we know they were BJP,” he said.

Batabyal has never heard of RSS, so he did not know if the symbol was that of RSS’s. Poor people across the state have received food kits and cooked meals from RSS.

In Bagnan and Uluberia Purba, The Wire observed that the single biggest issue of voters in this area is corruption in the aftermath of Amphan. But people are unsure if the issue will translate into votes.

A local BJP worker who wished not to be named said, “Chiran Bera is an unknown name and people don’t know anything about him. While TMC’s Majhi is a heavyweight candidate. So, we are little worried about BJP’s performance here.”

Pallab Majhi, a BJP supporter, said, “We could have won this seat but bad candidate selection and poor campaigning messed up our prospects.”

Raju Nayak, a BJP old-timer from Basudebpur gram panchayat opined otherwise and said, “We have a very strong chance to win this seat because people here are angry with the MLA. There was huge corruption during Amphan. So, people have decided to vote for a change.” 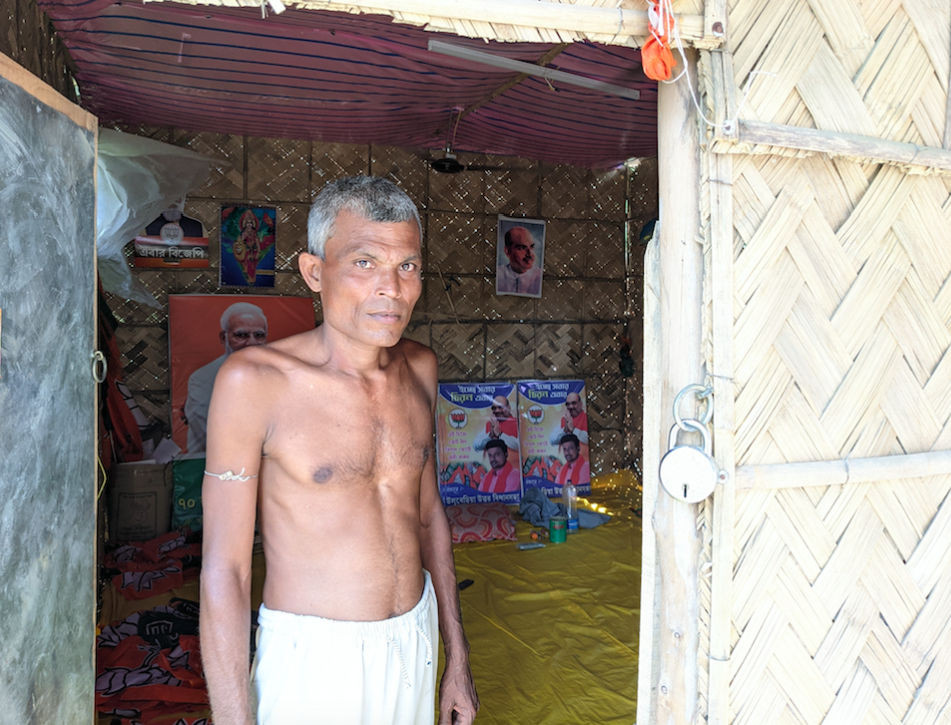 Basudebpur panchayat has been under BJP since 2018 and many locals levelled charges of corruption against the panchayat pradhan and upa-pradhan. One Ranajit Goswami said, “This panchayat is under BJP and so much corruption was seen during Amphan, how can they defend themselves? Why will anyone vote for a corrupt BJP? On the other hand, in the last 10 years, Majhi worked for the constituency, build super-specialty hospitals and resolved the drinking water problem.”

But 35-year-old Laltu Hazra, who owns a watch shop in Sriraj Bati gram panchayat, said, “There is full support for BJP and we are winning this seat. People are looking for change and to get rid of this corrupt government. This government has done nothing for the youth. Today, we don’t have jobs and industries in Bengal. Hence, a change is very much needed and it will happen.”

Dulal Bor, also a resident of Sriraj Bati, complained that he has not received any compensation after Amphan wrecked his house. “All the compensation money was looted by TMC people.” When asked whether other development works benefitted in any way, he said, “My daughter received Rs 25,000 from Rupashree scheme. We are receiving free ration since the lockdown.”

At Panchla assembly constituency, discontent over Amphan compensation echoed. Shek Shudauddin Mallick, a resident of Laskarpur gram panchayat, said, “We were thoroughly deprived during Amphan. The ruling party did not help. People who were not affected received the compensation.” When asked if he will vote against TMC, he said, “This time we cannot take any chance, but support Didi (Mamata Banerjee). This is a crucial election, we by any chance don’t want BJP to come to power in Bengal.” Mollah said that the ISF candidate was with TMC until the morning he was offered a ticket by the new party. “During the 2018 panchayat election, I was beaten up by his men. I was hospitalised for 15 days. Now, CPI(M) wants me to accept this person as my leader. Forward Bloc workers are not accepting this decision.”