BJP workers blocked the Goghat-Arambagh Road for some time in protest against the incident before being dispersed by police. 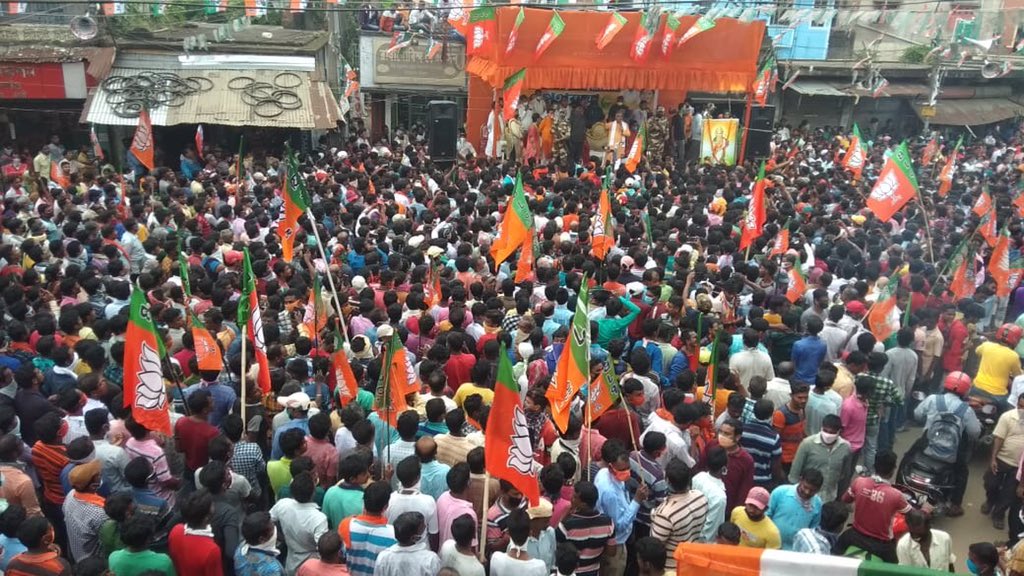 BJP's Dilip Ghosh at a rally at Dhaniakhali in Hooghly. Photo: Twitter/@DilipGhoshBJP

Kolkata: The body of a BJP worker was found hanging from a tree in West Bengal’s Hooghly district on Sunday, police said.

Ganesh Roy, a middle-aged BJP worker, was found hanging from a tree near his village in Khanati in the Goghat area, they said.

The BJP alleged he was murdered by members of the ruling Trinamool Congress, a charged denied by the state’s ruling party.

Roy was missing since Saturday evening, police said, adding that the circumstances behind his death were being investigated.

State BJP president Dilip Ghosh alleged that Roy was murdered by the TMC and then his body was hanged from the tree around midnight to spread panic among his party’s workers in the area.

“It has become a new trend to hang to death BJP workers. But we will launch a strong resistance. TMC is scared of the growing support for the BJP,” he said.

The Trinamool Congress said their party members were not involved in the death of Roy.

Hooghly’s BJP MP Locket Chatterjee said, “This brutality needs to stop. Where are the champions of democracy and why are they silent on these never ending killing of BJP workers in West Bengal?”

BJP workers blocked the Goghat-Arambagh Road for some time in protest against the incident before being dispersed by police.

On July 28, a BJP booth president’s body was found hanging in Haldia in East Midnapore district.

Before that incident, the body of BJP leader and Hemtabad MLA Debendra Nath Ray was also found hanging near his home in North Dinajpur district, amid allegations by his family and the party that it was a “cold-blooded murder by TMC”, a charge again denied by the ruling party which said that he had died by suicide, citing the post mortem report.

Over the last few years, bodies of several BJP workers have been found hanging in different parts of the state.