"Many people are thinking they will get jobs with this card. What we actually wanted to do is a survey to measure the level of unemployment," said state party chief Dilip Ghosh.

Kolkata: The Bharatiya Janata Party has withdrawn a campaign to provide ‘job assurance’ cards to 75 lakh youths in Bengal which contained the promise that they would be provided jobs if the party won the 2021 assembly election.

The campaign was launched on December 13.

Speaking to The Wire, BJP state president and MP Dilip Ghosh said, “There is a problem with the term ‘jobs’. Many people are thinking they will get jobs with this card. What we actually wanted to do is a survey to measure the level of unemployment and then design a policy for employment generation. With ‘jobs’ mentioned in the scheme, they are thinking the government will be responsible for providing jobs. But that is not the case. There can be private jobs, some people might start their businesses.”

While launching the programme, BJP had said that over the next few months, the ‘job assurance’ card will be distributed to youths spread across 294 assembly seats. BJP had said card holders will be given jobs based on their academic merit in the next five years, should BJP come to power in 2021.

Also read: Ahead of Bengal Elections, Why Is BJP Softening Its Stance on CAA?

Present at the event on December 13, BJP national vice-president Mukul Roy had said, “The chief minister [Mamata Banerjee] held several global investment summits over the last nine years, but no investment has come to the state for setting up industries, while those who have units in the state are being compelled to move base owing to the syndicate raj.”

BJP has made unemployment a crucial poll plank in Bengal. Bharatiya Janata Yuva Morcha (BJYM) state president and Bishnupur MP Saumitra Khan had also said the Mamata Banerjee government has failed to provide jobs. “Instead of providing employment to people, the chief minister is asking young men and women to sell street food for a living. We will provide job avenues to the youth,” Khan had added.

Both Roy and Khan had been in the Trinamool Congress until 2019.

When The Wire reached out to Khan to get a reaction on the roll back of the scheme, Khan said, “We have stopped giving the job assurance card. Instead of giving jobs, we will work for employment generation.” Khan disconnected the call when asked a follow up question.

Meanwhile, Khan shared a video clip of the press conference on December 13 on his Facebook page with a Bengali caption that translates to “We will keep our promise.” 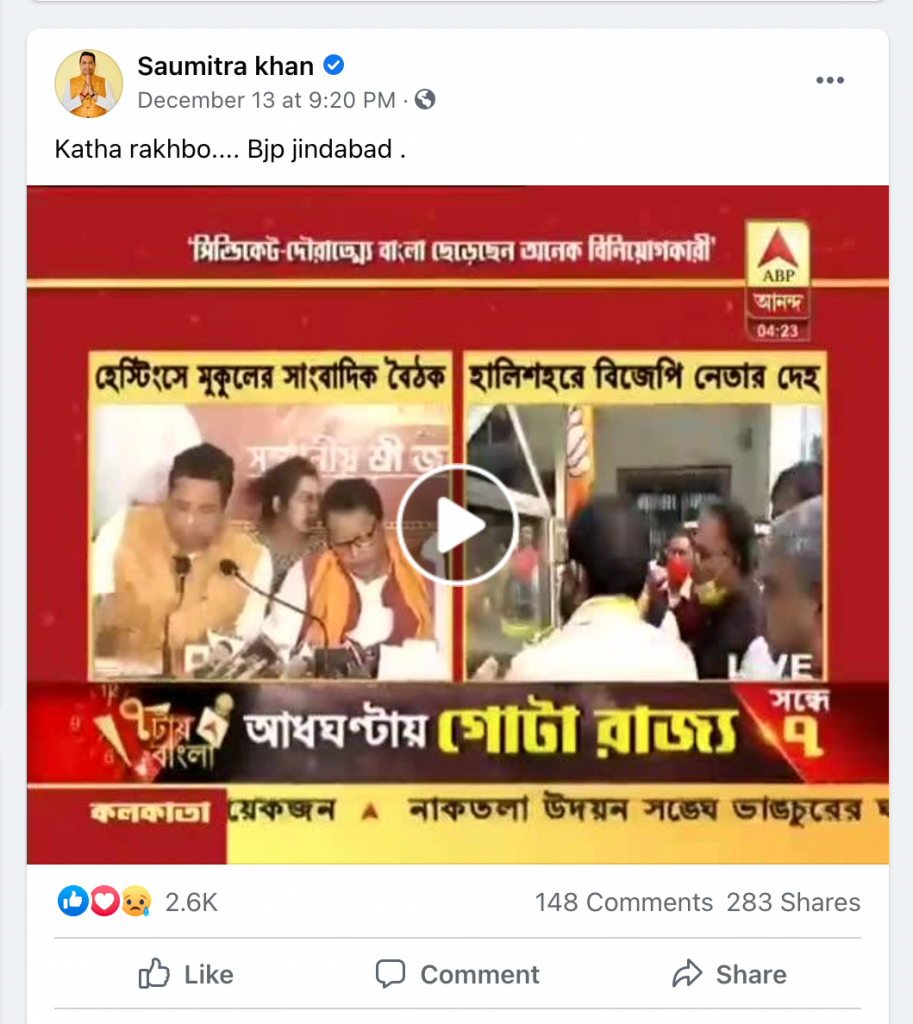 A senior government official from West Bengal, requesting anonymity, told The Wire, “The campaign completely bypasses the official employment exchange procedures. There is no merit in the campaign, and it would have been struck down by any court of law.”

Reacting to the BJP’s U-turn on the employment generation campaign, veteran TMC MP Saugata Roy said, “The U-turn proves BJP is all about gimmicks. Their (BJP) youth president came up with this useless scheme. Most of their leaders opposed it, so they stopped.”