In October 2018, Malik had cancelled the tie-up with Reliance General Insurance Company for providing the group health insurance to employees as there was "some bungling" in it. 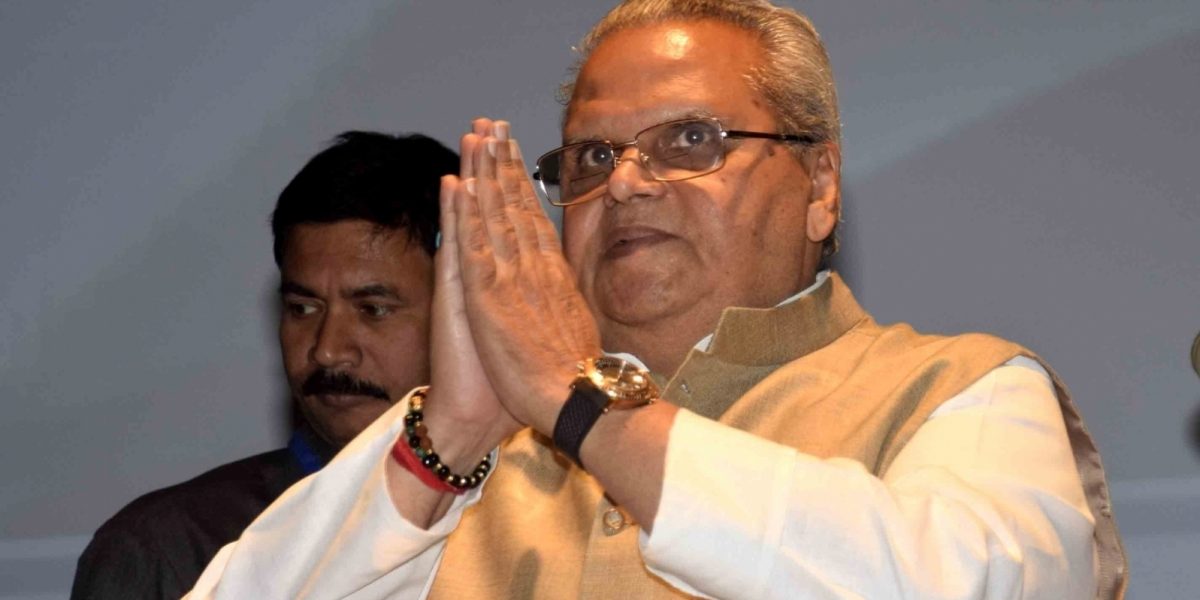 New Delhi: Former Jammu and Kashmir governor Satya Pal Malik has claimed that he was told he would get a Rs 300 crore bribe if he cleared two files belonging to “Ambani” and an “RSS-affiliated man” during his tenure but he cancelled the deals, and praised Prime Minister Narendra Modi for supporting his decision by saying there is no need to compromise on corruption.

Malik, who currently holds the gubernatorial post in Meghalaya, also supported the ongoing farmer agitation against the Union government’s farm laws and said he is ready to leave his post and stand with them if their protest continues.

“After going to Kashmir, two files came to me (for clearance), one belonging to Ambani and another to an RSS-affiliated man who was a minister in the previous Mehbooba Mufti-led (PDP-BJP coalition) government and claimed to be very close to the prime minister.

“I was informed by secretaries in both the departments that there is a scandal involved and I accordingly cancelled both the deals. The secretaries told me that ‘you will get Rs 150 crore each for clearing the files’ but I told them that I have come with five kurta-pajamas and will leave with that only,” Malik told a gathering at an event in Jhunjhunu in Rajasthan.

A video of his speech has gone viral.

Malik did not elaborate on the two files, but he was apparently referring to a file related to the roll-out of a group health insurance policy for government employees, pensioners and accredited journalists, for which the government had tied up with Reliance General Insurance, part of the Anil Ambani-led Reliance Group.

In October 2018, Malik who was then the governor of J&K, had cancelled the tie-up with Reliance General Insurance Company for providing the group health insurance to employees as there was “some bungling” in it.

Two days later, the governor approved foreclosure of the contract with Reliance General Insurance and referred the matter to the Anti-Corruption Bureau for examining the entire process to see whether it was conducted in a transparent and fair manner.

“As a precaution, I took time from the prime minister and briefed him about the two files and the scandal as the people involved were taking his name. I straightaway told him that I am ready to leave the post but if I stay back, I am not going to clear the files,” he claimed and praised Modi for saying that there is no need to compromise on corruption.

Malik also alleged that Kashmir is the most corrupt place in the country. “In the whole country, 4-5% commission is sought, but in Kashmir 15% commission is demanded,” he said without explaining, but added that under his leadership, there was no big case of corruption reported in J&K and that he even declined a favour to his relatives in the valley.

He said after his return from Kashmir, he made a statement in favour of the agitating farmers. He said that he being poor is his strength and he can fight any powerful man in the country.

“If the farmer agitation continues, I will leave my post and stand with them without caring for anyone. It is possible when I have done no wrong and do not have any wrong item in my wardrobe. I am satisfied that I have not done anything wrong,” he said.

Advising newly recruited officers not to budge under pressure and work honestly for the betterment of society, he asked them to remain alert against their wives who “spoil everything” by demanding more and prompting their husbands to indulge in corrupt practices.

“The pressure will come and you will also feel good (by taking bribe)…. In Jaipur, there are officers who did not even have thatched houses in their native places have built palatial houses. But if you remain steadfast and honest, you can fight anyone,” Malik said.

The former J&K governor said he does not have a house to live in after his retirement but “I do not have any worry that I have no house.”

Malik said he had been an MLA, an MP and a Union minister but people from Rajasthan who have a lot of money would come to his place and be surprised at seeing his “small accommodation”.