The run up to polls saw a stiff contest as a resurgent Congress picked holes in the Gujarat model and the BJP, which started on the vikas plank, went back to its Hindu nationalist campaign. 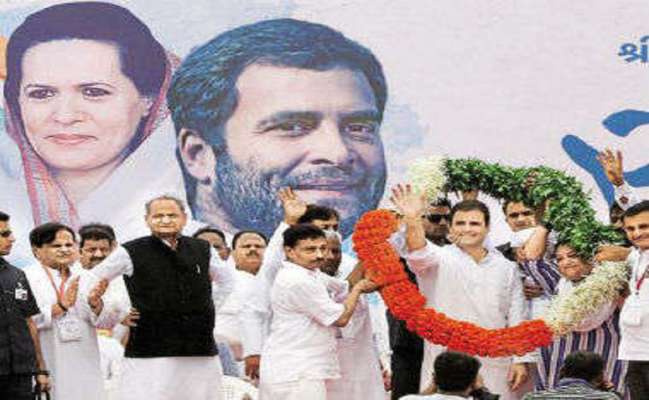 The Congress tried to tap into a perceptible disenchantment among peasant communities. Credit: PTI

New Delhi: The second and final phase of polling in Gujarat ended today amidst high political drama as the Congress trained its guns on the Election Commission (EC) for allegedly failing to act against the Bharatiya Janata Party for violating the model code of conduct repeatedly.

On the morning of December 14, soon after Prime Minister Narendra Modi cast his vote, he walked up to greet people who had gathered outside booth number 115 in Sabarmati. The event turned into a massive roadshow as, on his way back, Modi greeted the people who had formed a beeline to see him. Many of them were carrying the BJP’s saffron flags. As slogans of “Modi, Modi” permeated the air, the prime minister stood on his SUV’s footboard to wave at people.

The Congress alleged that Modi’s road show was a pre-planned event and a gross violation of the Commission’s rule that forbids any party to conduct a public campaign on the day of polling. The BJP, on the other hand, averred that Modi was only spontaneously responding to people who had come to see him and that it reflected how popular the prime minister was.

The Congress went on to say that the EC was behaving like a “PS” to Modi, casting aspersion on the independence of the Chief Election Commissioner (CEC) A.K. Joti, who was the chief secretary of Gujarat when Modi was the state’s chief minister.

The Grand Old Party’s attack came on the heels of the EC’s decision to bar Rahul Gandhi’s television interviews aired on December 13. Citing a violation of rules, the EC ordered FIRs against the TV channels in question and also served a show cause notice to the Congress president.

Alleging that the BJP president Amit Shah too used the Ahmedabad airport to hold a press conference on the morning of December 14, Congress spokesperson Randeep Surjewala came down heavily on the EC for having “different standards” for the ruling BJP and the Congress.

“It is a sad day for the country as the EC has denigrated the constitution…The CEC who was like a PS to Modi earlier is still operating like one. This is shameful for the Election Commission,” said Surjewala, adding that the constitutional office was behaving like a “puppet and a frontal organisation” of the ruling BJP.

End to a pitched battle

Even as the controversy over the EC’s independence refuses to die, the pitched electoral contest between the two parties, which had started almost two months ago, ended with the final phase of polling. The battle in Gujarat was one of the tightest competitions in the history of Gujarat, with both parties mounting their campaigns on two starkly different fronts.

The Congress tried to tap into a perceptible disenchantment among peasant communities – reeling under a severe agrarian crisis – against the BJP by pointing out the limitations of Modi’s pro-corporate model of growth. It addressed pertinent issues among the business communities, who have been affected by a complicated GST, and raised issues like increasing unemployment to attract a significant chunk of restive young voters. 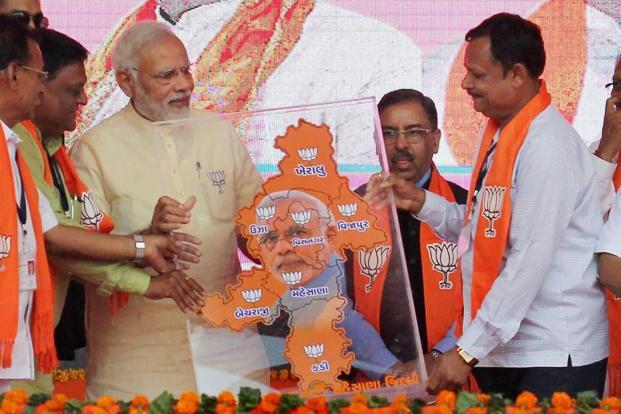 The BJP, which has only been facing a demotivated Congress in other states over the last three years, looks set to meet a much-tougher Congress in future elections if it maintains this momentum. Credit: PTI

On the other hand, the BJP, which started off by beating its own drum about the success of the Gujarat model, lapsed into a strong Hindutva campaign with an intent to consolidate Hindus. While its slogan was that of vikas in the initial rounds of campaign, top BJP leaders like Modi, Adityanath, Vijay Rupani and Anurag Thakur switched to a polarising campaign, whipping up religious insecurities of Hindus and equating Congress’s rule with an Islamic regime. The constant linkages the saffron party made between the Congress, Muslim raj and Pakistan is a case in point.

Along with this, the BJP tried to engage disenchanted caste and community groups, reversed the GST measures that had affected the Gujarat-centric textile and diamond industries, and more significantly, turned this provincial election to a mandate for or against Modi. Modi, as the party’s star campaigner, referred to each criticism against the BJP as a personal insult against him and “Gujarati pride”. As the positive narrative around Gujarat model failed to catch enough attention, the party relied on Gujarati sub-nationalism to draw attention of the crowds.

Whichever party wins this election, political analysts across ideological spectrum, agreed that the electoral campaign saw a resurgent Congress, willing to fight its toughest battle strongly. Despite a much weaker organisation than the BJP, the Rahul Gandhi-led team put up a comprehensive campaign, which unnerved the BJP at many stages and forced it to go back to its age-old Hindu nationalist political narrative.

Further, the team’s timely manoeuvre to rope in popular young leaders Hardik Patel, Jignesh Mevani, and Alpesh Thakor – all representing electorally influential caste groups – to support the party was widely considered as a successful political strategy. It managed to rupture the saffron party’s core voter base, which was unofficially estimated to be around 35% of Gujarat’s population.

Whether this would be enough for the Congress or not cannot be said. But the BJP, which has only been facing a demotivated Congress in other states over the last three years, looks set to meet a much-tougher Congress in future elections if it maintains this momentum.

While exit polls have given a clear mandate to the BJP in Gujarat, one would only know on December 18 which party emerges at the top. The voting turnout for the second phase was 69.99% as opposed to 71.3% in 2012 in the seats that went to polls in the second phase. The first phase also saw a lower turnout than the previous assembly elections. While a lower turnout conventionally does not portend change and is considered to be favourable to the ruling party, election researchers have said that, in Gujarat, it may not mean much.

One accepted reason for this is that the electorate appeared to be fractured on multiple factors. Urban versus rural, young and old, service class versus entrepreneurial sections, and many other such divisions rendered a complicated picture. While many looked at the BJP with enthusiasm, a substantial number of former BJP voters also spoke about an exhaustion – and occasionally anger – with the party’s long rule in the state. Many were tight-lipped about their political preferences and many wanted change. Most analysts have already said the political conditions in this Gujarat election were very different from the previous state elections.

In such a scenario, a lower turnout could mean anything. The BJP thinks that its traditional voter base came out to vote while the angry ones did not. The Congress thinks just the opposite. When results come out, one would know what it actually meant. But whichever party comes to power, the first thing it may have to do is to bridge the acrimonious divisions which were so visible in Gujarat’s society as elections neared.