Sections of the media as well as wings of the ruling BJP have labelled senior JNU professor Nivedita Menon as ‘anti-national’, causing people to speak out once again against the crackdown on dissent. 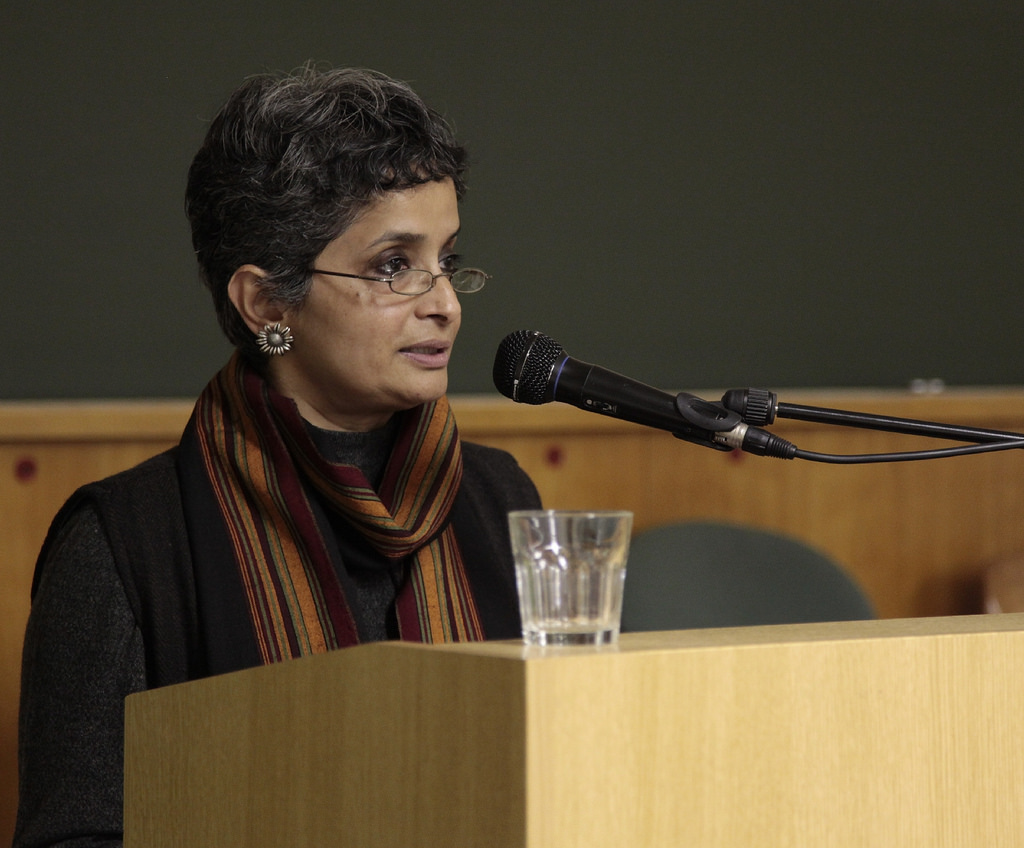 More than a month after the controversy began in JNU over alleged ‘anti-national’ sloganeering in support of Kashmir, the branding of professors and students as ‘anti-national’ by certain media groups and political organisations like the ABVP continues.

One of the latest targets of this campaign has been Nivedita Menon, a well-known political scientist and author of the book Seeing Like a Feminist. Menon is professor at the centre for comparative politics and political theory in JNU, and has been open in her support for JNU students after the February 9 event as well as about the perceived attack on university spaces in recent times. She was also one of the JNU professors roughed up by the lawyers at Patiala House Court for trying to attend JNU students’ union president Kanhaiya Kumar’s hearing on 16 February.

Like many intellectuals and academics including Romila Thapar, Satish Deshpande, Lawrence Liang, Prabhat Patnaik and Satyajit Rath, Nivedita Menon addressed a nationalism teach-in at JNU’s administrative block. In her lecture on February 22, she talked about the efforts to spread the domination of Hindi as a ‘national language’, the importance of raising questions for social transformation, and the ‘nationalist’ attitude people from the rest of India show towards the Northeast.

On the issue of Kashmir, Menon talked about how the accession of Kashmir into India at the time of independence and partition was on the condition that a plebiscite would be held, a plebiscite that has not happened till date. “We know that people the world over think that India is illegally occupying Kashmir”, she said. “…the map of India looks very different in international publications like Time and Newsweek, but these copies are burnt or censored and never reach us here. If people are raising slogans for azadi, shouldn’t this be looked at in the context of India being seen as an imperialist country internationally?”

Moving on to the question of AFSPA, Menon called what happened in areas where AFSPA was imposed a “daily emergency”. “And this is being done in the name of the Indian people, we are all party to this injustice. …the face of Indian nationalism that people see in Kashmir, the northeast and parts of Chhattisgarh is the Indian army”.

“Now everyone who is offering a counter-nationalism or questioning the notions of development that talk only about dams and flyovers but not about people’s lives, is being labelled as anti-national. Taking this into account, the list of ‘anti-nationals’ would include all Muslims, Christians, adivasis fighting land acquisition, those in Tamil Nadu who refuse to speak Hindi, women who wear jeans, drink alcohol and fight patriarchy, and many others. If you go on like this, there would only be 24-25 people who are ‘really patriotic’ including PM Narendra Modi, Amit Shah, Manusmriti (sic) Irani, and the 22 lawyers who tried to beat us up (in Patiala House Court). If this is the face of nationalism in our country, we should be very worried about nationalism.”

Menon’s critical statements about the government and its policies are not the first of their kind; several social movements, activists and intellectuals have brought up issues like that of Kashmir and AFSPA for years now. The targeting of dissenters and the campaign against Menon could suggest that her dystopian view of what remains as ‘truly national’ in this country is where we are headed.

First to bring Menon’s name into the discussion on ‘anti-nationals’ was the Bharatiya Janata Yuva Manch (BJYM), the youth wing of the BJP. They filed a police complaint against the professor, and said in a statement that “JNU professor Nivedita Menon has been spewing hatred against the Indian armed forces in public meetings. She made statements like it is recognized worldwide that India is illegally occupying Kashmir”.

When contacted by PTI after the complaint, Menon said she did not believe that she had said anything anti-national.

Quick to jump on to the bandwagon of labelling Menon was Zee News. This channel has been accused of airing doctored videos of a JNU campus event. On March 8, executive editor of the channel Sudhir Choudhury took selective quotes from Menon’s speech and called her anti-national. They also showed clips from a previous speech of Menon’s in 2014. In her response to Zee News’ reportage, she has said that her previous speech has been “massively decontextualized”, and clarified her stance. The channel has also labelled well-known poet and scientist Gauhar Raza as ‘anti-national’. IBN 7 went the same way, demanding that sedition charges be slapped against Menon.

On March 13, another police complaint was filed against Menon by the ABVP (student wing of the BJP). The complaint is signed by Saurabh Sharma, JNU students’ union joint secretary, and says that the professor made statement like: “Everyone knows that India is illegally occupying Kashmir. It is said the world over. Everybody accepts (this)” and “Manipur and Kashmir have been illegally occupied by the Indian state”.

In response to the campaign against Nivedita Menon, leading activists from the Indian women’s movement have written a statement in her support, saying that they are shocked at the “vilification” of Menon, and that the police complaints have been filed “with the sole intent to harass her”. “We find it reprehensible and condemnable that a person of Dr Menon’s eminence and standing should be subjected to gratuitous slander and be framed as an ‘anti-national’ by a section of people who are driven by narrow agendas”, the statement goes on to say. “We believe that such politically driven, misogynist onslaughts diminish democracy which is about the exchange of ideas in an atmosphere free of fear and intimidation. We call upon all right-thinking individuals to speak out against such totally unwarranted media harassment and demand that the ruling party steps in to rein in their young volunteers from spreading an atmosphere of intimidation and anti-intellectualism in the country.” This statement has been signed by several leading activists and academics including Aruna Roy, Kamla Bhasin, Kalyani Menon-Sen and Zoya Hasan.

Concerned citizens have also written a statement in solidarity with both Menon and Gauhar Raza, requesting “the Press Council of India and the Broadcast Association to take necessary action against these channels for their unacceptable and unlawful reportage”. A Facebook page created in Menon’s support also contains messages from former students and supporters, expressing their solidarity.