Should he be participating in a programme to celebrate Ashok Singhal, who was being prosecuted by an agency of his own erstwhile government for involvement in a serious crime? 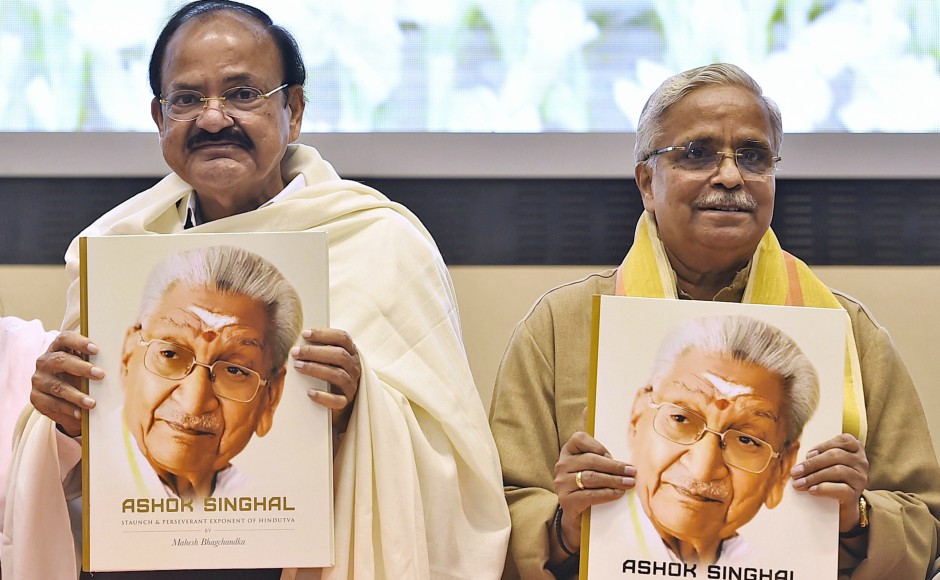 The prestige of the office of the vice president of India was severely undermined when its present occupant, M. Venkaiah Naidu, decided to participate in a programme extolling the virtues of a known Muslim and Christian hater, Ashok Singhal. Singhal was leader of the Vishwa Hindu Parishad and a prominent member of the RSS. But as journalist Neena Vyas wrote after his death in 2015, he “will be remembered as one of the leaders of Independent India who did maximum damage to Hindu-Muslim relations in the country.”

Vyas recalled Singhal’s calm satisfaction at the violence targeting Muslims in Gujarat in 2002 under the watch of the present prime minister:

“On September 3 that year (2002) in Amritsar, Singhal described the Gujarat carnage as a ‘successful experiment’ that he would like to see repeated throughout the country if the ‘jihadi mentality of Muslims’ remained unchecked. He noted that in Gujarat, village after village had been ‘cleansed of Islam’.”

“Barely three months after the Gujarat Carnage, the VHP … plans to turn Uttar Pradesh into a laboratory for carrying out experiments aimed at promoting the feeling of Hindutva among Hindus and starting a campaign against ‘the Muslim mentality of jihad.’ The firebrand VHP leader, Singhal, was quoted as having said that ‘Ab jahan jahan Godhra hoga wahan wahan Gujarat bhi hoga (wherever there is Godhra there will be Gujarat).’ He said that Muslims ‘who nursed the jihadi mentality’ would be taught a lesson. ‘In Gujarat, for the time there has been a Hindu awakening and Muslims have been turned into refugees. This is a welcome sign and Gujarat has shown the way to the country. Politics in India will now be based on the Hindu community – Jo Hindu hit ki baat karega woh Bharat pe raaj karega‘.”

Ashok Singhal remained the face of the VHP in what were the most violent and hate-filled days of independent India, if we do not count the time we are living in. The VHP was created long back to publicly do what the RSS did not want to be seen doing: instilling anti-Muslim hatred in Hindus. In 2009, years after the demolition of the Babri Masjid, Singhal unrepentantly advised Lal Krishna Advani to stop calling December 6, 1992 the “saddest day” of his life. That Advani was saying so save himself from being implicated in the criminal case of conspiracy is a separate point:

Mr. Singhal said the day ought to be celebrated as “Shaurya Divas” — Day of Valour — and it was time Advani stopped calling it a black day or a sad day or saying the demolition was unfortunate.”

If people mistakenly think that poor Singhal was driven by his passion for the Ram Mandir, they need to re-read his statements which target Muslims for being what they are, Muslims. He was not only for the removal of the mosque in Ayodhya, he also wanted the Muslim population evicted from its vicinity. In 2006, when a case related to the mosque was being heard in the Supreme Court, UNI reported that,

“Vishwa Hindu Parishad international president Ashok Singhal today demanded the removal of a Muslim-dominated dwelling near the makeshift temple of Ram lalla in Ayodhya. Reacting to the central government’s plea before the Supreme Court to grant more time to find an amicable solution to the controversy of tightening the security around the makeshift Ram temple in Ayodhya in view of the increased apprehension of terrorist attacks, Mr Singhal said removing the dwelling from near the acquired land was more important.”

Months before his death, while speaking at the release of a book on the life and work of former RSS chief K.S. Sudarshan, Singhal gloated over the victory of the Narendra Modi-led BJP and prophesied that the world would become Hindu by 2030: “I was at the Sai Baba Ashram where Sai Baba told me by 2020 the entire country will be Hindu and 2030 the entire world will be Hindu. I feel that revolution has started.”

Hailing the coming to power of the Narendra Modi government, he said the victory has put an end to the 800 years of “slavery”. “This is not a modest revolution. It will not remain confined to India but present a new ideology before the world,” he said.”

If people think that the present anti-madarasa campaign by the state governments of Madhya Pradesh and Uttar Pradesh were the brain child of these governments, they need to go at least a decade back to what the Organiser, considered the mouth piece of the RSS had to say. It quotes Ashok Singhal as arguing that “without local Muslims’ shelter and support, no outside jihadi can attack”. Hence, the government “should immediately clamp down on madrasas”.

Those who think Singhal was upset with Muslims as they were insisting on their right to mosques which were built by destroying Hindu temples have to understand that he suffered from an anti-Christian pathology as well. When Christians were attacked in the villages of Dangs in Gujarat, Singhal blamed missionaries. The New York Times noted, “While churches in Dangs were burning in the days after Christmas, the national leaders of the World Hindu Council, the same group Mr. Patel heads in Dangs, were meeting in Jaipur. Ashok Singhal, the council’s international executive president, told reporters that the late Mother Teresa had given injections to people who refused to convert to Christianity to make them go insane. He also accused her of supporting Albanian terrorists.”

In an interview to Frontline P.A. Sangma, former speaker of the Lok Sabha said, “Vishwa Hindu Parishad (VHP) leader Ashok Singhal terms Christians anti-national; he even says that Christians are Central Intelligence Agency (CIA) agents. These are serious allegations. However, he is unable to prove these charges.”

We have often been asked to not give attention to “crackpots” like the now departed soul. We have been assured by the ‘well wishers’ of the nation (and the BJP)  that people like Singhal should be treated as part of the “fringe” of the BJP and the RSS.

Should we then allow the office of the vice president to legitimise this fringe, which stands f0r nothing if not hate and violence? Vice President Venkaiah Naidu  hailed Singhal as one of the “finest proponents of Hinduism” who “sacrificed” 75 years of his life for the benefit of future generations. He said that Singhal was “an exemplary individual who selflessly dedicated himself as an (RSS) pracharak and served society”.

We do not know of any scholarly or philosophical addition to Hinduism that Singhal made. On a different note,  Singhal was still an accused person when he died; he was chargesheeted for his role in the demolition of the Babri Masjid. Should the vice president of India be participating in a programme to celebrate a man who has been implicated in a criminal case and who was being prosecuted by an agency of his own erstwhile government?

The vice president has a past as a Swayamsevak. He needs to leave that behind if he is to live up to his oath of office. At the same event, Venkaiah Naidu also sought to force the idea of chanting ‘Vande Mataram’: “Vande Mataram ke baare mein vivaad hota hai … Maa ko salaam nahi karenge toh kisko karenge? Afzal Guru ko karenge kya? (Vande Mataram is an ode to the motherland, what is the problem with it? If you don’t salute your mother, who would you salute, Afzal Guru?).”

Forget Afzal Guru, the vice president should tell us how appropriate it was for him to salute Ashok Singhal, – whose life mission of making India a Hindu Rashtra goes against the very constitution which Naidu took an oath on to reach his present office.