The UP assembly polls have turned out to be a contest between those who are attracted to BJP’s monetised Hindu nationalism, and those who it has left behind.

Varanasi: As the marathon seven-phase run of Uttar Pradesh assembly polls ends on Monday, a small protest by a group of slum-dwellers in Varanasi that went unnoticed sums up the larger political contest in India’s most populous state.

Around 100 families, mostly from the Mallah or boatmen community, were displaced from Khidkiya Ghat between October and December 2020 after the Union government decided to spruce up the stretch between Khidkiya Ghat and Raj Ghat under the Smart Cities Mission. The renovation of the ghats, on the lines of the Sabarmati riverfront in Ahmedabad, was meant to attract tourists. A Meerut-based company, Preeti Buildcon Private Limited, was given the contract to redevelop the ghats, but the project has run into inordinate delays.

In the hype and hoopla surrounding the redevelopment plans, however, those 100 extremely poor families whose houses were run down by the state government’s bulldozers were entirely ignored. These families didn’t own the land but had made the Khidkiya ghat slum-cluster their homes for over 60 years. 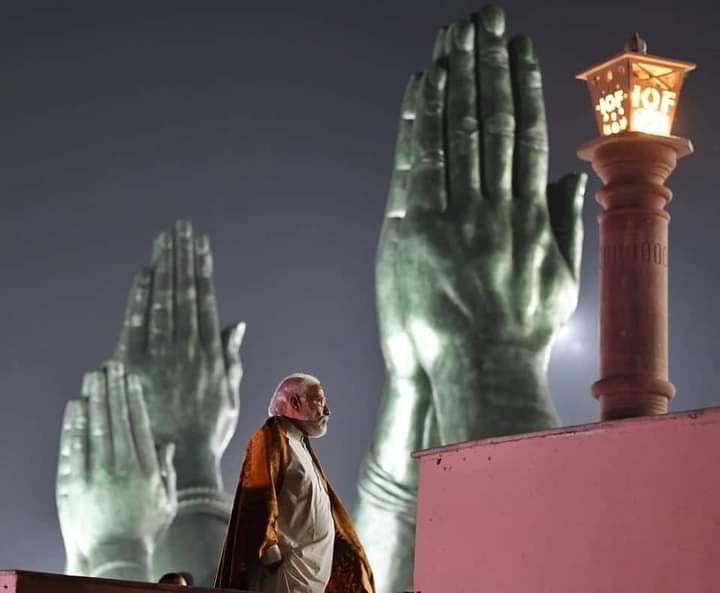 After being forcibly displaced, most families have moved under the railway bridge near the Kashi railway station. A majority of them have built temporary tarpaulin sheet tents and are living in abysmal conditions. A few have rented one-room kuccha houses at a neighbouring slum cluster but say that the rents, ranging between Rs 2,000 and Rs 3,000, have become unaffordable due to the negligible or stagnant incomes over the last few years.

“We have been living at the Khidkiya Ghat for more than 70 years. Our parents first moved here and depended on either fishing or boats to make a living. The government forced us out of the ghat without thinking about how we will survive,” said 50-year-old Sharda Sahni, as she showed us her new tent under the railway bridge.

“When our jhopris (makeshift houses) at Khidkiya Ghat was demolished, we lost most of our belongings. The bulldozers tore through our homes without giving us adequate time to rescue our things,” she added.

Madhu Sahni, another displaced person, chipped in, “Even if we die of hunger, the government won’t be bothered. When we go to government officials, they get irritated and shoo us away. When the government has a scheme to allot houses for the poor, why can’t we get it?”

For over two years, these families have been living near Khidkiya Ghat in makeshift tents, harbouring expectations that the government may see their condition and allot them houses. However, Saurabh Singh of Inner Voice Foundation, a NGO which works among Varanasi’s poor, told The Wire that the officials have shown no interest in the matter.

“The government believes that since they were occupying the land illegally, they are not eligible for any rehabilitation benefits,” he added.

Singh said when the families’ homes were demolished, the officials constructed a night shelter in the Bajardiha locality of the city and moved only 20 out of the 100 families there. “The other 80 families have been left to fend for themselves. Even those 20 families which were supposedly rehabilitated aren’t allowed to live in the night shelter during the day,” he said.

Singh has written to multiple offices of the state government and even to the Prime Minister’s Office about the problems that the displaced families have been facing because of the Khidkiya Ghat redevelopment project. “Most offices, including the PMO, have marked our requests as ‘resolved’, even as nothing has been done to rehabilitate them. Now when we go to meet officials, they mostly throw insults at us and ask us to stay away from them,” said Singh.

The Khidkiya Ghat redevelopment project and its human cost is an instance of how the BJP-led Union and state governments’ emphasis on big, privately-funded infrastructure projects has alienated a large chunk of the poor and ignored their livelihood issues in Uttar Pradesh. While the Adityanath government’s PR campaign is focused exclusively on the creation of multiple six-lane highways and multi-storeyed buildings, the working people, whose economic distress has only amplified, feel slighted by the high-handed approach of their elected representatives.

Prime Minister Narendra Modi’s parliamentary constituency Varanasi reflects the all-round misery of common citizens. Five hundred metres away from the newly-built Kashi Vishwanath corridor, the Brahmin community in Dasashwamedha Ghat talked about how the corridor has stripped them of their livelihood.

Also read: In O.P. Rajbhar’s Zahoorabad, Caste and Religion Allegiances Have Turned on Their Head

“To build the corridor, the government had to demolish at least 300 small temples and many heritage buildings including old libraries, mutts, shops, and residences. A lot of people lost their livelihood in the process. A number of Brahmin priests depended on these small temples; many depended on the shops that got crushed by the bulldozers. The corridor violates the very soul of Kashi,” said the former priest of a Shiva temple which had to make way for the corridor, not wishing to be named.

He added that they were hoping that the government would employ them in the Kashi Vishwanath corridor but it handed over the corridor management to the international consultancy group Ernst and Young, which has made its own rules and regulations.

Inside the Kashi Vishwanath temple, a Dalit sanitary worker complained about irregular payments and heavy workload. “We work for around 10 hours every day but our salaries are a mere Rs 8,000. And even that doesn’t come on time,” said the worker.

In another corner of Varanasi, the Nati Imli-based Bunkars, famous for weaving intricate zari designs to make the globally-known Banarasi sarees, talk about how their business has fallen drastically in the last few years, even as the government remains unconcerned. “Almost 50% of the Banarasi weavers have migrated to Bangalore-based sari factories where they have fixed incomes. Some have even quit their traditional work,” Mohammad Ahmad Ansari, a 60-year-old weaver, told The Wire.

“And why not? We are skilled workers but our daily incomes are currently less than Rs 400 if we work for 12 hours a day on a power loom. The market for Banarasi sarees has taken such a huge hit in recent times. Even the unskilled workers who are engaged in construction work earn more than us,” he said.

Similarly, university students in the Lanka area of Varanasi talked about about how they were looking at a grim future since there are no jobs available for them. Dalits and OBC Rajbhars in Shivpur constituency in the outskirts of the city feel the government’s privatisation drive has killed vacancies for government jobs which, they say, were their only means to live a secured life.

Farmers in the same constituency talk about how stray cattle which graze in their farms have affected crop production so much that their income from farming is almost negligible. “On the one hand the government gives us free ration, and on the other takes much more away by increasing prices of fuel and other essential commodities,” said Preeti Rajbhar, a 25-year-old woman who farms with her father.

Across UP, working communities feel like their aspirations are being crushed under BJP’s “development” dream that is focused singularly on the improvement of corporate infrastructure. The government, they feel, tends to turn a blind eye towards more immediate problems of common citizens, reeling under different degrees of distress.

This resentment has metamorphosed into a bipolar electoral battle between the BJP, which has anchored around a regimented form of commercialised Hindu nationalism, and the Akhilesh Yadav-led Samajwadi Party, which has attempted to create a social coalition not merely along caste and community lines but also around issues of life and livelihood.

In a recent interview to The Wire, the former Mahant of Kashi Vishwanath temple Rajendra Tiwari equated the temple corridor with a “mall” while slamming the BJP’s model of mixing politics, business and faith. Nothing can exemplify this equivalence better than the “Bharat Mata (Mother India)” statue that has been placed right at the entrance of the main temple gate in the newly-built Kashi Vishwanath corridor.

The Bharat Mata statue at the entrance of the Kashi Vishwanath temple. Photo: Special arrangement

Over the last two months, the UP assembly polls have turned out to be a contest between those who are attracted to BJP’s monetised Hindu nationalism, and those who it has left behind.