'Maa Ganga's Blessings in Flow, There Should Be No Corona': Uttarakhand CM on Kumbh Vs Markaz

Tirath Singh Rawat also said, "The devotees attending Kumbh are not from outside but our own people." 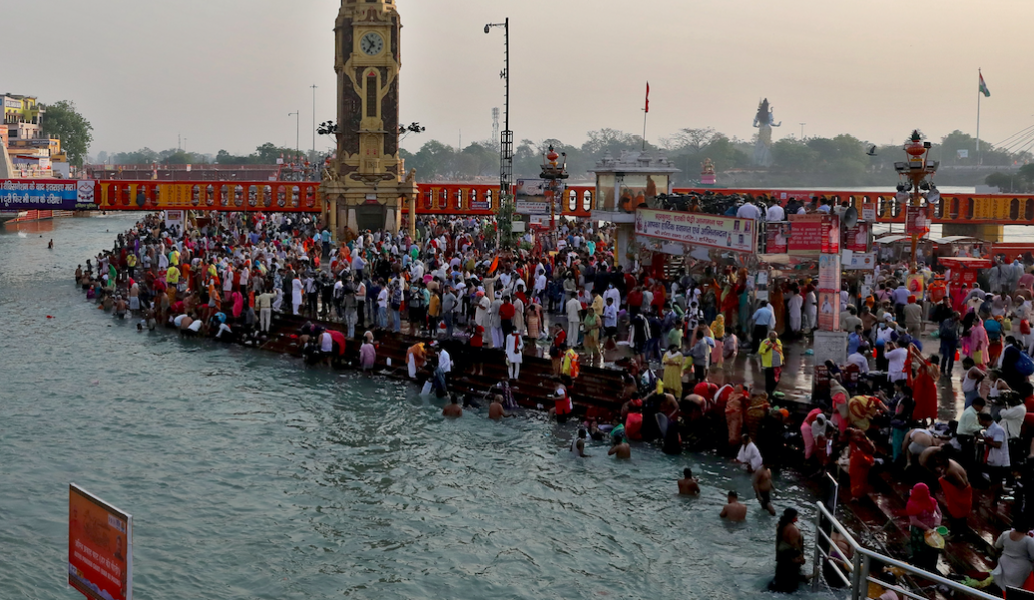 Devotees gather to take a holy dip in the waters of river Ganges during Kumbh Mela, or the Pitcher Festival, amidst the spread of the coronavirus disease (COVID-19), in Haridwar, India, April 12, 2021. Photo: Reuters/Anushree Fadnavis

New Delhi: Amidst global scrutiny of crowds at the Kumbh Mela in Haridwar in the middle of a COVID-19 surge, Uttarakhand Chief Minister Tirath Singh Rawat has said that the event should not be compared with the Nizamuddin Markaz.

The Markaz and Muslims in general came under vicious and communal criticism last year after attendees of the Tablighi Jamaat event tested positive for the coronavirus. On Tuesday, April 13, Rawat answered a reporter’s question on why the two religious events should not be equated by citing a few points.

“The Markaz was held in a closed space, in a kothi like structure whereas the Kumbh is being held in the open on the sprawling ghats of the Ganga,” Rawat said, adding that the akhadas allegedly reach the river banks at various time slots.

While Rawat seemed to indicate that the open air venue of the Kumbh Mela would ensure social distancing norms would be maintained, photographs of the events indicate otherwise and have revealed that enormous crowds congregated at the river banks – as has been seen at Kumbh Melas for years.

However, Rawat then went on to cite another reason that defeated his first line of reasoning.

“Most importantly, Kumbh is at the bank of the River Ganga. Maa Ganga’s blessings are there in the flow. So, there should be no corona,” added the chief minister, according to ANI.

Citing other differences between the Kumbh Mela in Haridwar and Nizamuddin Markaz, Rawat said, “The devotees attending Kumbh are not from outside but our own people.”

While it is true that the Markaz last year had attendees from Bangladesh, Malaysia and Indonesia, among other countries, there is no clarity on why Rawat sought to demarcate between people “from outside” and “our own people” for a disease which is universally contagious.

Rawat then said that when the Markaz was held, there was not much awareness on the coronavirus. “Nor were there any guidelines,” he said, ostensibly agreeing with the fact that in spite of the ritual bashing that mainstream media subject Markaz attendees to, no national emergency had been declared when the gathering was held.

“No one knew for how long the attendees of the Markaz had remained in the confines of the structure. Now there is more awareness both about COVID-19 and the guidelines related to it,” the chief minister added.

Relatedly, on April 12, the Delhi high court had observed that there cannot be a limit on the number of devotees allowed inside the Nizamuddin Markaz if no other religious place has a similar restriction in light of the COVID-19 surge

He also said Kumbh comes once in 12 years and is linked with the “faith and sentiments of millions of people.”

Also read: Maha-Kumbh Mela Vs Tablighi Jamaat: Not Comparable, But Not For The Reasons Rawat Thinks

“Holding it successfully amid the challenge posed by COVID-19 by ensuring that the SOP is strictly followed by all is our goal,” he said.

Rawat said people’s health is a priority but matters of faith cannot be totally ignored.

“Cases have of course risen of late but we are following the health ministry guidelines and the recovery rate is good. Arrangements are also adequate to deal with any situation,” he said.

Large-scale arrangements of masks and sanitisers have been made in the Mela area and the entire machinery is working day and night to ensure that the COVID-19 guidelines are followed by everyone, the chief minister said.

People are being checked at the border points before being allowed to enter Haridwar and attend the Mela. “There are also arrangements for the random testing of people,” he said.

In March, Rawat had said “faith of devotees will overcome the fear of COVID-19,” days before testing positive for the coronavirus disease.

Meanwhile, Haridwar has organised another ‘Shahi Snan’ ritual on Wednesday. Uttarakhand on Tuesday reported the highest single-day spike this year in COVID-19 cases with 1,925 testing positive in the state.

Dehradun district, with 775 cases, Haridwar with 594, Nainital with 217 and Udham Singh Nagar with 172 led the table while 13 infected patients died.