UP: A Spate of Police Cases Against Opposition Leaders Hints at Yogi’s Election Fears

In the space of 17 months, more than a hundred dissenters in the state have been charged with various offences. Is the BJP struggling to control its narrative of progress?

In the 14 days between August 27 and September 9 this year, the Uttar Pradesh police have filed six first information reports (FIRs) that charge more than 20 dissenters and opposition leaders in the state with various offences. The cases include Asaduddin Owaisi, chief of the All India Majlis Ittehadul Muslimeen (AIMIM), charged on September 9 for “attempting to disturb communal harmony”, Aziz Quraishi, former governor of Uttarakhand, charged on September 5 for sedition, 17 Aam Aadmi Party (AAP) leaders, including Manish Sisodia, deputy chief minister of Delhi, charged on August 30 for violating COVID-19 protocols and Amitabh Thakur, a former Indian Police Service officer who intends to challenge chief minister Yogi Adityanath at the polls next year, charged on August 27 for abetment of suicide.

Earlier, roughly a hundred supporters and members of the Samajwadi Party (SP) were named in police documents on July 5 for participating in a protest, while five SP leaders were arrested; Ajay Kumar Lallu, president of the UP unit of the Congress, was booked on July 16 for organising and participating in an unauthorised protest; and an SP leader was booked on June 5 and arrested on June 19 for participating in a Facebook Live event. Three Congress leaders were also named in an FIR for sharing the video of this Facebook Live event.

Even before that, between May 2020 and February 2021, leaders of opposition parties such as Rahul Gandhi and Priyanka Gandhi Vadra of the Congress, Akhilesh Yadav, president of the SP and Jayant Chaudhary, the then Rashtriya Lok Dal (RLD) vice president, were charged by the police for various offences ranging from a tweet to violating epidemic protocols while visiting the family of a murdered victim of rape to participating in the farmers’ protests against orders from the state.

In Bharatiya Janata Party (BJP) led-Uttar Pradesh, it appears that prosecuting the leaders, members and supporters of opposition parties is something of a trend.

Political commentators in Uttar Pradesh believe that this spate of charges against opposition leaders is a sign that the BJP has been trying to weaken democracy in India’s most populous state.

“The government is misusing its power to curtail the right of free speech, which is like oxygen to democracy,” alleged Ram Dutt Tripathi, former bureau chief of the BBC in India.

Legal luminaries believe that by constantly filing cases against opposition leaders, the government demonstrates to the general population what might happen to them should they also choose to dissent.

“The judiciary should take stern action against administrative officials who register frivolous cases. How will people gather the courage to speak against the government when top political leaders are not allowed to speak freely?” said retired Justice Imtiyaz Murtaza.

Many of the cases filed against opposition leaders appear to be petty or vengeful. For example, on October 1, 2020, Rahul Gandhi and Priyanka Gandhi Vadra were booked on charges of violating epidemic guidelines hours after they were detained on their way to Hathras, UP, to meet the family of a Dalit woman whose brutal gangrape by four upper-caste men had sparked severe criticism of the UP government. 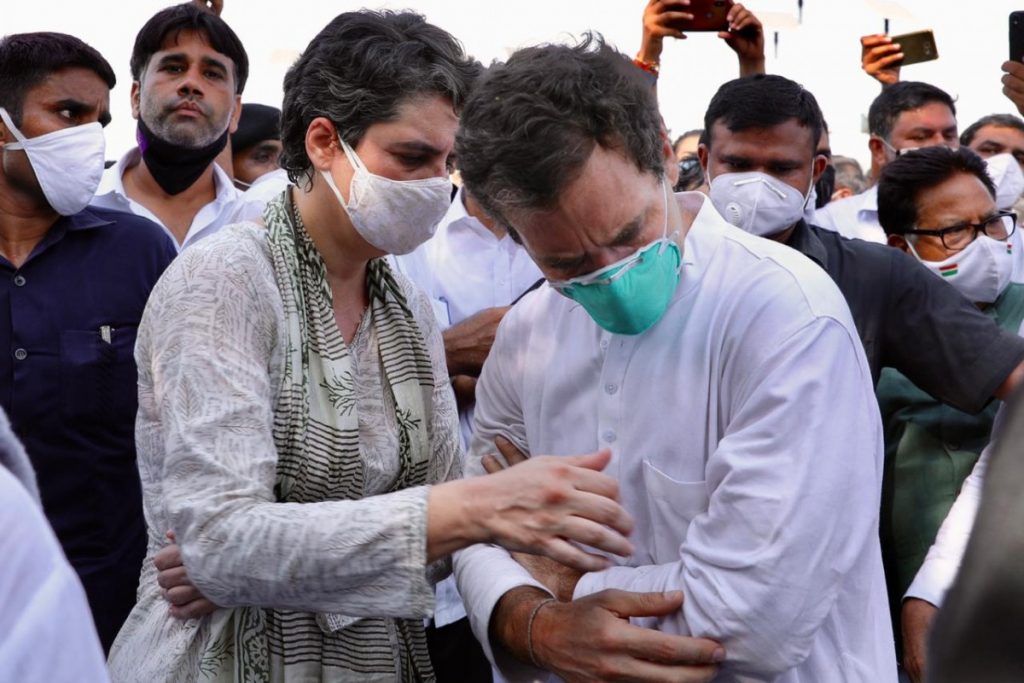 “The police should apply their own mind at the time of registering a case. This is not the British era when the government misused laws to suppress dissent,” said Vikram Singh, the former director general of police of UP, who believes that the police all over the country should avoid pandering to the political leadership.

Vaibhav Maheshwari, leader of the AAP, told The Wire the BJP government in UP “is misusing the pandemic and section 144 [of the Criminal Procedure Code]” to muzzle voices of dissent. “All the programmes of the ruling party were allowed to be held during the pandemic, while leaders of other parties were booked for holding rallies and protests on the pretext of COVID-19 protocols,” Maheshwari alleged.

For Deepak Singh, a member of the legislative council from the Congress, the outbreak of charges against opposition leaders shows not only the BJP’s “autocratic style” of functioning but also the fears of a government that is about to face elections. “The Yogi Adityanath government has failed to fulfil the promises it had made to the people so the government is suppressing voices that rise in support of the people,” Singh claimed.

However, according to BJP leader Harish Chandra Srivastava, cases have been registered against only those opposition leaders who have violated laws.

“The police took action to maintain law and order in the state,” Srivastava told The Wire over the phone. “None of the cases registered against any of the opposition leaders were intended to humiliate them.”

Cases against opposition leaders between May 2020 and September 9, 2021

Asaduddin Owaisi, chief, AIMIM: A case of “attempting to disturb communal harmony” on September 9, 2021, in Barabanki.

According to the police, in his election rally, Owaisi “vitiated communal harmony, incited feelings of a particular community, and made indecent and baseless remarks against Prime Minister Narendra Modi and Chief Minister Yogi Adityanath”.

Aziz Quraishi, former governor of Uttarakhand: A case of sedition filed by the Rampur police on September 5, 2021, acting on the complaint of local BJP leader Akash Kumar Saxena.

According to the FIR registered at Civil Lines police station, the former governor had visited Rampur to meet the family of jailed SP leader Azam Khan and made derogatory statements there against the Yogi Adityanath government, comparing it to “a blood-sucking demon”.

Manish Sisodia, deputy chief minister of Delhi: Sisodia was part of a group of 17 AAP workers, including Sanjay Singh, the AAP Rajya Sabha member of parliament and head of the UP unit of the party, who were booked on August 30 for violating COVID protocols during the party’s Tiranga Yatra (tricolour march).

Amitabh Thakur, former Indian Police Service Officer: Thakur was arrested in Lucknow by the UP police on August 27 a few hours after he announced that he would float his own political party, named Adhikar Sena, and contest directly against Yogi Adityanath in the forthcoming elections.

The police have accused Thakur of abetting the suicide of a victim of rape and her friend who had immolated themselves outside the Supreme Court on August 16.

Leaders and workers of the SP: Five SP workers were arrested from Ballia on July 5 for allegedly indulging in “indecent sloganeering” against UP’s sports minister, Upendra Tiwari. A day earlier, on July 4, the police had registered a case against 10 people, including Anand Chaudhary, the newly-elected Ballia zila panchayat chairperson, his father Ambika Chaudhary and about a hundred unidentified people. According to the police, the five SP workers, Shailendra Yadav, Manish Yadav, Tinkal Singh, Shivpal Singh, and Vikas Kumar Ojha, were arrested from the party office.

On September 8, also in Ballia, the police arrested five more SP workers for allegedly holding an unauthorised meeting at a police post and taking out a procession in the city. The arrested workers have been identified by the police as Sheikh Ahmad Ali, Sanjay, Suabul, Islam and Ravi Yadav.

Ajay Kumar Lallu, UP Congress president: On July 16, the police filed a case against Lallu for participating in a silent protest in front of a statue of Mahatma Gandhi at GPO Park in Lucknow against the violence that had erupted during the UP panchayat polls.

Priyanka Gandhi Vadra, the party’s national general secretary and UP chief, had also been part of the protest. According to the police, a case has been registered against Lallu for damaging public property and sitting in protest without permission and without giving prior information.

Lallu had also been arrested on May 20, 2020, during the first wave of the pandemic, based on allegations that he had provided false documents regarding the buses arranged by the Congress party for migrants labourers to enter the state during the lockdown.

This was the second time that day that the Congress state chief had been arrested. Earlier, he had been arrested in Agra for sitting in a dharna to protest the state government’s decision to disallow buses carrying migrants from entering UP.

In the first case, Lallu was granted bail by an Agra court and released on a personal bond of Rs 20,000. Soon after, he was arrested by a team of Lucknow police for allegedly submitting to the state government a fake list of 1,000 buses for migrant labourers. He was released from jail on bail on June 16, 2020, by the Lucknow bench of the Allahabad high court. 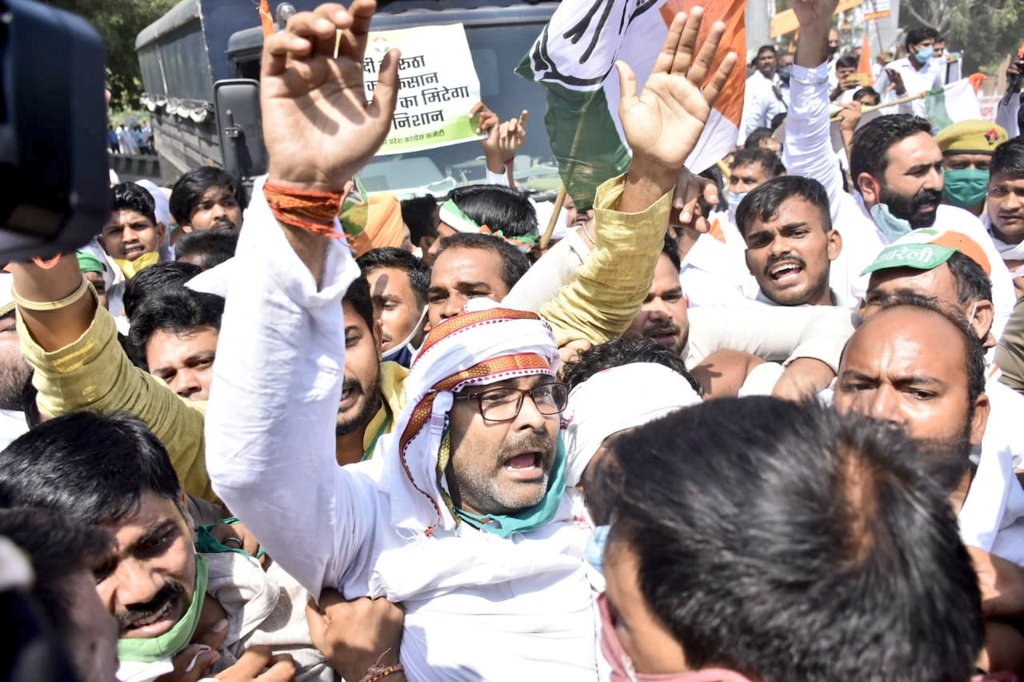 In the widely circulated video, the Muslim man, Abdul Samad Saifi, had alleged that some people had offered him an auto ride, taken him to an isolated spot, thrashed him and forced him to chant Jai Shri Ram.

The police registered an FIR against Idrisi and three Congress leaders with regard to this video, charging them with sections 153A (promoting enmity), 295A (act intended to outrage religious feelings), 504 (intentional insult), 505 (mischief) and 120B (conspiracy) of the Indian Penal Code and section 67 of the IT Act.

Subsequently, a team of UP police arrested Idrisi on June 19. The Congress leaders named in the FIR are Salman Nizami, Shama Mohamed and Dr Maskoor Usmani.

Udit Raj, Congress leader and former member of parliament: Dalit leader Udit Raj was booked by the police on February 19, 2021, for claiming in a tweet that the two girls found dead in the fields of Unnao had been raped and their bodies had been burnt against the will of their family.

The FIR against Chaudhary registered at Gonda police station charged him under sections 147 (rioting), 188 (disobedience to order duly promulgated by a public servant), 269 (unlawfully or negligently spreading infection of any disease dangerous to life) and 270 (malignant act likely to spread infection of disease dangerous to life) of the IPC and appropriate sections of the Epidemic Diseases Act.

Akhilesh Yadav, SP president and former chief minister of UP: Yadav was charged under the Epidemic Diseases Act when he led a protest march from Lucknow to Kannauj as part of a Kisan Yatra (farmers’ march). He was detained by the Uttar Pradesh Police on December 7, 2020, under Section 144 of the Criminal Procedure Code after he defied the administration’s efforts to put him under house arrest.

Priyanka Gandhi Vadra and Rahul Gandhi, Congress top brass: The police registered a case against the Gandhi siblings on October 1, 2020, after they were detained while on their way to Hathras to meet the family of a Dalit woman whose brutal gangrape and murder by four upper-caste men outraged the country.

An FIR was registered against the Congress leaders at the Ecotech One police station of Gautam Budh Nagar under sections 188 (disobedience to orders duly promulgated by public servants) and 270 (persons who malignantly do any act which is likely to spread the infection of any disease dangerous to life.) of the IPC and Section 3 of the Epidemic Diseases Act.