The development came a day after the ruling party suffered a jolt with the resignation of state government minister Swami Prasad Maurya. 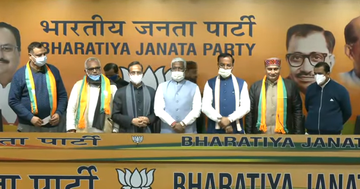 Both Saini and Yadav hail from backward castes, and the BJP’s decision to induct them into its fold appears to be aimed at refuting suggestions that it is confronting challenges in maintaining its strength among the OBCs, a group in which Swami Prasad Maurya is seen as an influential leader in parts of the state.

Top BJP UP leaders, including chief minister Yogi Adityanath, continued to hold meetings with the party’s central leaders on Wednesday as they gave final touches to the list of probable candidates for the initial phases of the seven-phase assembly polls in the state starting from February 10 and deliberate over other aspects of the campaign.

Amid speculation that Adityanath, who is currently a member of the Legislative Council, may also fight the assembly polls, a party leader said it is unlikely that he will contest from Mathura, as suggested by some reports.

Adityanath enjoys popular appeal among BJP supporters across the state, a party leader noted, adding that the central election committee, whose members include Prime Minister Narendra Modi and other top party leaders, will take a final call on whether he should contest or not.