In UP's Mirzapur, Decline in Carpet and Brass Industries Has Intensified Financial Insecurity

Small and medium business owners feel abandoned by the government, especially after the COVID-19 pandemic. 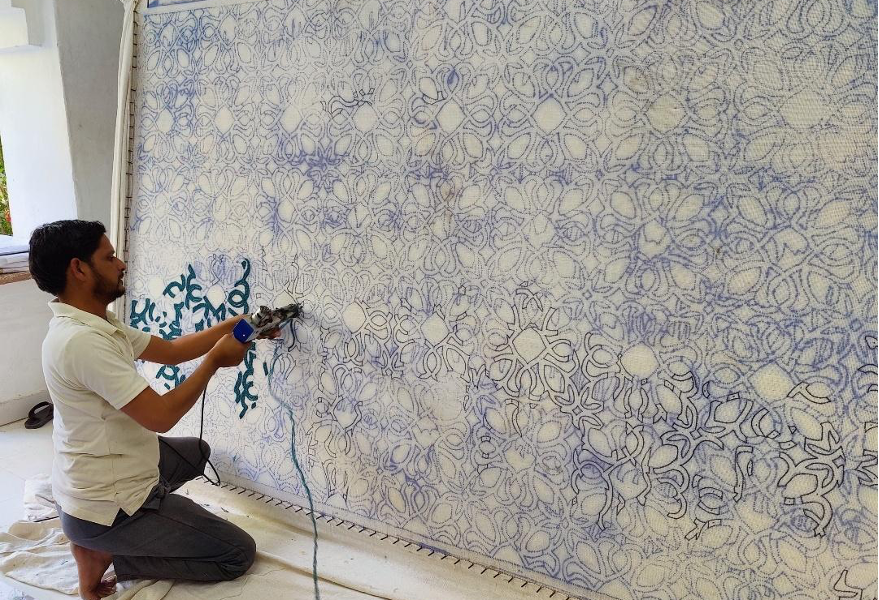 A carpet being dyed in Mirzapur. Photo: Ismat Ara

Mirzapur: Pappu has been working to polish brass plates for the last eight hours, and plans to work for another eight hours in a small space inside a building in Mirzapur’s Tulsi Chowk.

His target is to finish polishing at least 40 kg worth of brass plates, which will earn him about Rs 900 per day.

For such work, labourers earn between Rs 18 and Rs 23 per kg of utensils polished, and this wage is considered to be a luxury. “This kind of work comes around only once or twice in a year. So we try to earn as much money as possible,” he said.

The shop Pappu is working in is owned by Ram Babu, and was earlier owned by his father and grandfather. Ram Babu pointed out that polishing work is required only during festivals and wedding seasons.

While steel and aluminium utensils are easily available in the market for cheaper prices, brass is still in demand as it is considered to be holy when used in pujas.

Right now, the plates being polished are the ones that could not be sold due to COVID-19. For Pappu, even though the past two years with COVID-19 have meant unstable work and income, free ration under the Yogi Adityanath-led Bharatiya Janata Party government in Uttar Pradesh has been a lifesaver. 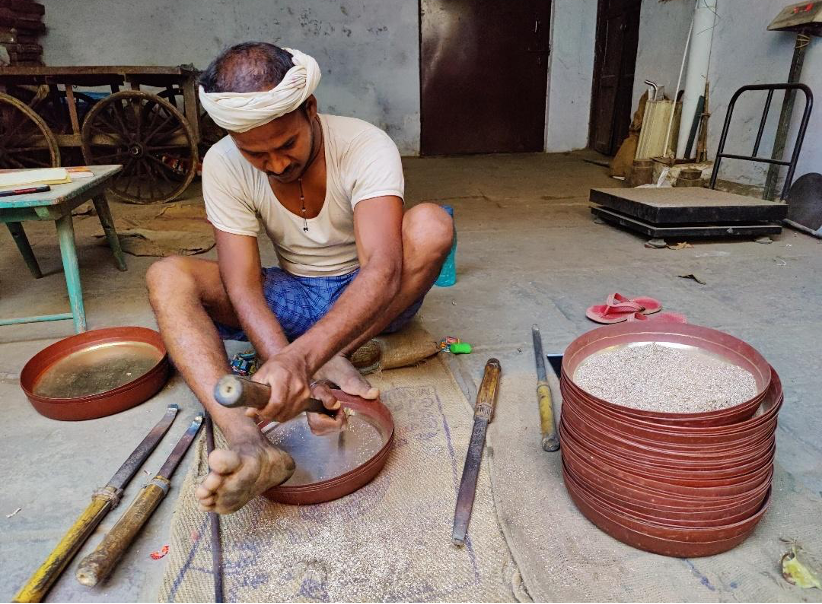 But Ram Babu, a medium-scale factory owner of brass products, said that while the poor are getting free ration to survive and the rich are making more money, medium-sized businesses are suffering the most.

Fluctuations in the rates of raw material too affects the medium and small scale factory owners which dominate the industry, he said.

“Middle class people are still bearing the brunt of COVID-19, with little to no government policies,” he said, adding that the One District, One Product (ODOP) scheme started by the UP government has not yet reached the small players of the brass industry in Mirzapur. The scheme aims to encourage indigenous and specialised products and crafts.

At the age of 60, he is also worried about how he will sustain himself during his old age without a pension.

Meanwhile, Pappu has finished polishing at least five more plates, turning the rusty brown plates into shiny ones. He also does small-scale farming, sells vegetables and works as a daily-wage labourer because opportunities, he said, are “scarce”.

Brass work is the second most important industry in Mirzapur. The first is that of carpet weaving, with 90% of the carpets sold to foreign customers. But in recent times, exports have taken a hit, mainly due to the COVID-19-induced lockdown.

Bhadohi, the adjoining district, is the biggest exporter of carpets and is renowned for its hand-knotted carpets. Mirzapur’s carpet industry, experts say, is now overshadowed by Bhadohi even though the two are often collectively referred to as the Bhadohi-Mirzapur carpet belt.

Weaving, according to local myths, originated in Mirzapur during the rule of Mughal emperor Akbar. Ask any worker, and they will tell you about the group of captured Irani weavers who were rescued by the people of Mirzapur, in exchange for which the workers offered to stay in the region and teach people how to weave. 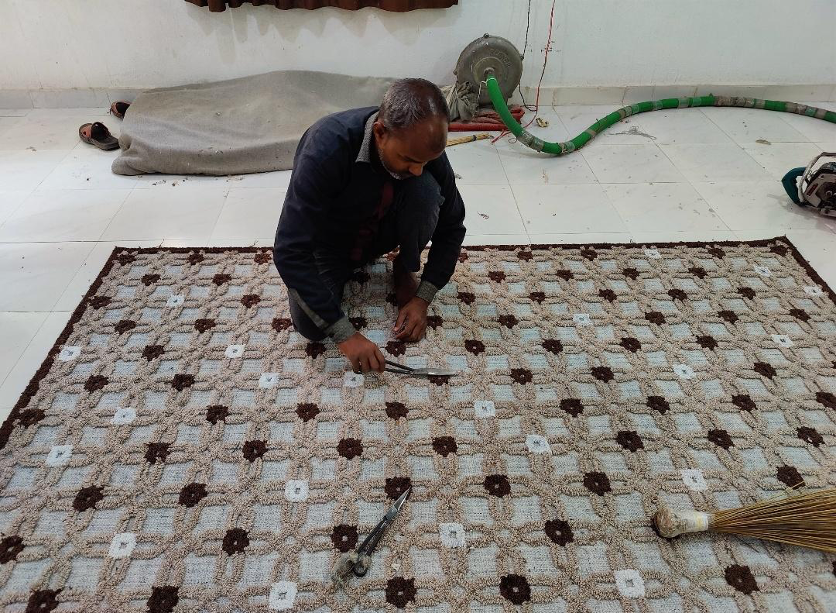 A carpet being produced in Mirzapur. Photo: Ismat Ara

The carpets in Mirzapur are made using an intricate knot-by-knot technique, with fingers. As the number of knots increases, the carpet becomes more intricate, and more expensive. The industry comprises dyeing houses, designers and weavers.

Mohammad Arif Khan, who manages a factory with over 200 unregistered and up to 40 registered workers in Mirzapur, one of the biggest manufacturers, said that Bhadohi’s name comes up when talking about carpets, but Mirzapur is hardly mentioned.

And the past few years, with COVID-19, have made it difficult for traders to survive. “The profit margins have gone down immensely, export has taken a hit…” he said.

He added that at least 20 lakh people in Mirzapur are either directly or indirectly involved in the carpet industry.

Mohammad Parvez Khan, owner of the Neman factory and a member of the Bahujan Samaj Party, said that during an election campaign rally in 2014 in Mirzapur, Prime Minister Narendra Modi had pointed at an old chimney and said, “Ye chimney dhuan nikalegi (Smoke will come out of this chimney).” But the chimney, attached to a cotton mill that has remained unused for decades, has instead turned into a local sightseeing hub. 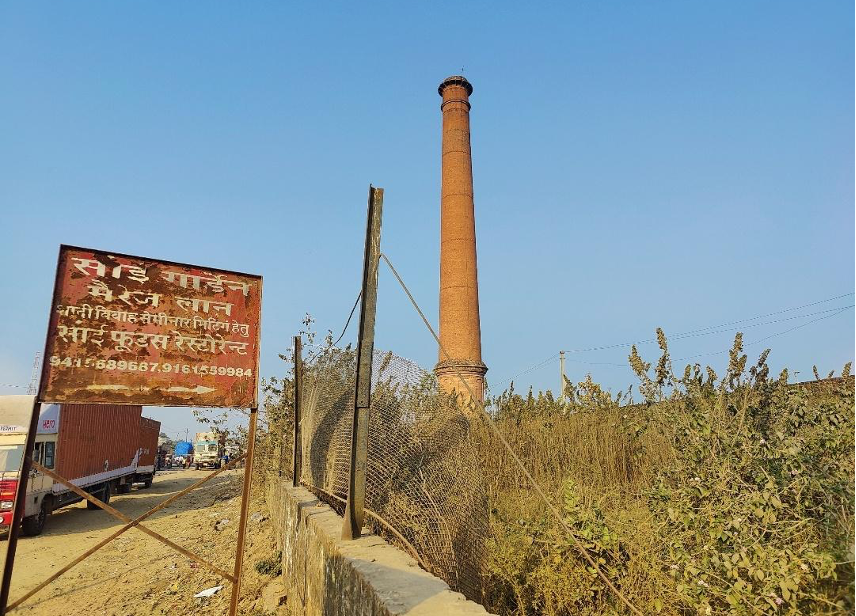 The chimney Modi had referred to. Photo: Ismat Ara

Meanwhile, one of his workers, showing him a flat woven dari, asked him if the finishing looks good. Khan directed the worker to focus on the binding and make it smoother.

“The carpets here are unique because they are made with our supervision and the workers’ intricate finger work,” he said.

There are many weaving techniques used in the industry including knitting, handweaving, Tibetan hand knot, dari (flat weaving), Turkish knot and Persian knot. While Bhadohi stands at number one, Mirzapur, Jaipur and Bikaner are also involved in carpet exports.

More than 90% of the carpet exports go to the US, while some countries in Europe show an interest too.

The RoDTEP (Remission of duties and taxes on exported products) scheme, introduced by the BJP government to promote exports, has made big exporters dejected, as there is a cap on the benefits.

“No matter how much export, the benefits of this scheme will remain stagnant because of the cap,” said Khan. The RoDTEP scheme was introduced after replacing the Service from India Scheme, which allowed exporters to gain benefits as per their export value.

He added that ETP (effluent treatment plant) outlets, connected to a central monitoring system to check the pollution level of the water released, has also caused exploitation of small scale industry owners who are “forced to give bribes” to get clearances. 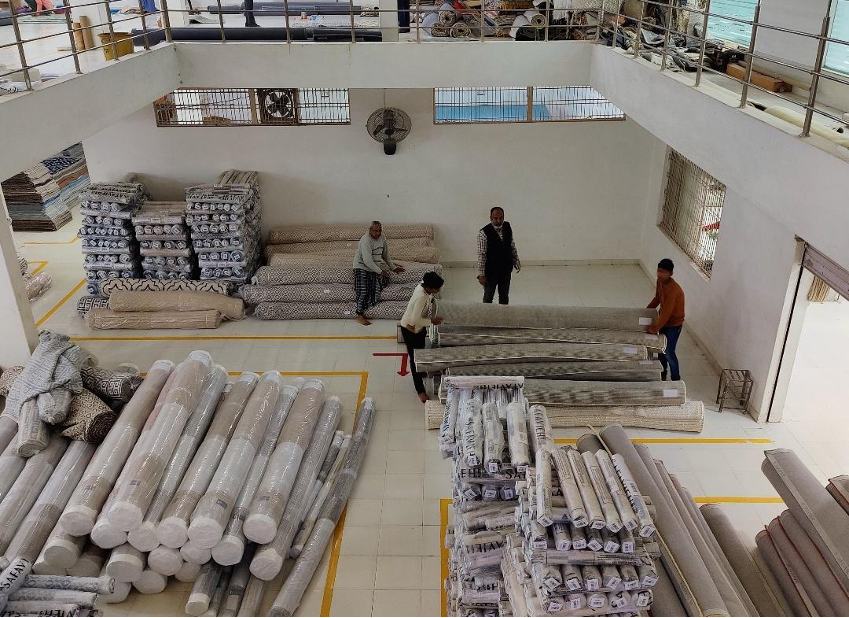 A majority of workers in this industry earn about Rs 150 for a full day’s work and live in dire conditions, worsened during the past two years by the COVID-19 pandemic.

Aman, a worker who is involved in the weaving of carpets, said that he has been working in this industry for over three decades. “The skill takes time to learn, and it took me my entire life but I still don’t call myself an expert. There is difficulty in the work, it requires finger work and affects our eyesight, yet the earnings are too little in the face of inflation,” he said.

Aslam Mahboob, a member of the CEPC (Carpet Export Promotion Council) and vice-president of AICA (All India Carpet Association), said that while Haryana is growing in terms of exports, the Bhadohi-Mirzapur belt is consistently lagging behind.

“This is because at the local level, there is little support from the government. If this continues, Bhadohi will no longer remain the number 1 exporter,” he said.

He added that because of poor infrastructure such as roads and lack of hotels in the city, the buyers do not want to come to the district.

“In the making of just one carpet, more than 25 families are involved. But ultimately, workers who are involved end up with very little. If the government focuses on the branding and marketing of the carpets here, all the people involved will benefit from the boom. Otherwise, the big fish will eat up the small ones to survive,” he said. 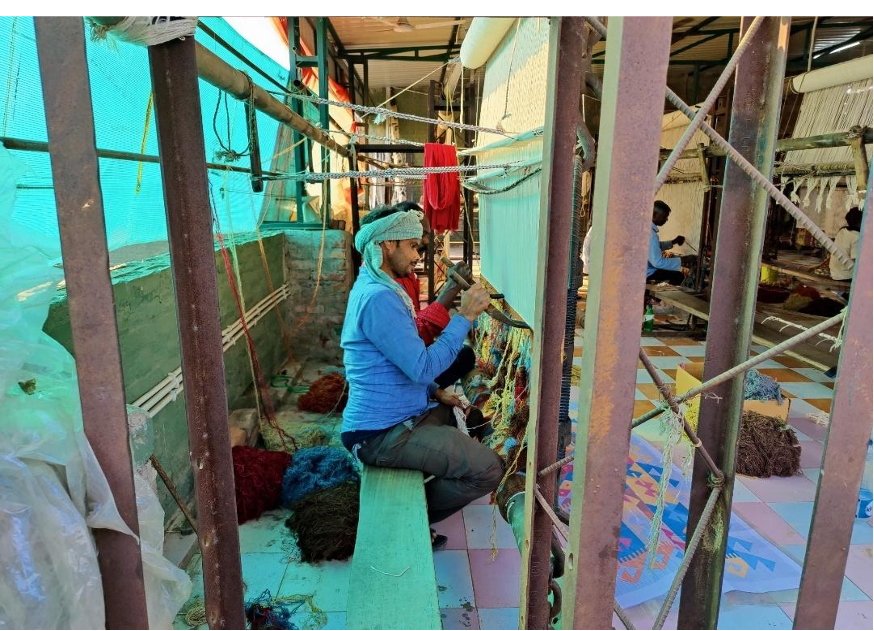 There is also an ever-growing issue of migration because of the lack of work opportunities in Mirzapur, considered to be among India’s 250 most backward districts.

He added that if the problems with the carpet industry persist, the carpet belt may also get affected by Naxalism, an issue in the nearby districts of Sonbhadra and Chandauli.

The district will go to polls in the last phase of the seven-phased elections in Uttar Pradesh, on March 7. All five assembly seats were won by the BJP and Apna Dal (S) alliance in the previous election.

It is considered to be a stronghold of the Apna Dal (S), with the party chief Anupriya Patel twice elected to parliament from the constituency.

This election is being seen as a direct competition between the BJP and the SP, with alliances of both parties with small regional parties.

The SP is hopeful of securing a huge number of votes from the Yadav and Muslim communities to defeat the BJP, but without the support of the non-Yadav OBC votes eastern UP, it may not be enough.

The voting pattern of key voters in this constituency, engaged mostly in these industries – Kurmis, Maurya, Nishad, Binds, Mallahs and Rajbhars (OBCs) – will be a testing ground for both the BJP and the SP.

There are also four lakh Dalits, close to a lakh Brahmins, about a lakh Baniyas, over 90,000 Thakurs and 1.2 lakh Muslims in Mirzapur district.

The distress of carpet and brass industry workers and disillusionment of exporters, worsened by the impact of COVID-19, and a general sentiment of neglect from the BJP government, has emerged as a major polling factor this time.