For Crying Out Loud: Emotional Campaigns Upend Predictions Ahead of Last Phase of UP Polls

From canvassing in ambulances to shedding copious tears over dead relatives, some political leaders have turned the tide in their favour by tugging at voters' heartstrings. 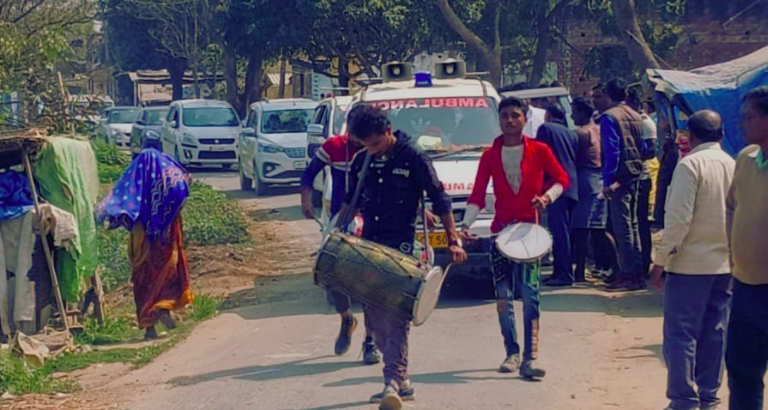 Nirmesh Mangal's supporters beat drums ahead of his ambulance as he campaigns as an independent candidate for the last phase of the Uttar Pradesh election. Photo: Facebook/Nirmesh Mangal

Gorakhpur: As electoral campaign entered the last phase in Uttar Pradesh, many political rallies in Gorakhpur and Basti divisions have turned into a contest of tears.

Candidates have been making emotional appeals to seek votes. In two assembly seats, their tearful rhetoric has stirred voters so much that existing equations have been tousled.

Nirmesh Mangal, who is contesting as an independent from the Maharajganj reserved seat, canvassed on an ambulance. His health deteriorated soon after he filed his nomination and he fell unconscious while leaving the office. He was taken to a hospital where, diagnosed with a heart ailment, he underwent treatment for more than two weeks. In that time, his son and wife took charge of the poll campaign on his behalf.

After being discharged from hospital, Mangal arrived in his constituency in an ambulance and resumed canvassing.

For the past four days, Mangal has been travelling in his constituency in the ambulance itself. As he reclined on a stretcher inside the emergency vehicle, his supporters distributed pamphlets and urged people to vote for him. People gathered around the ambulance to see him. Some expressed sympathy.

Besides physically campaigning for votes, Mangal has also released a video on social media in which he passionately appeals for votes and urges people to grant him a new lease of life. 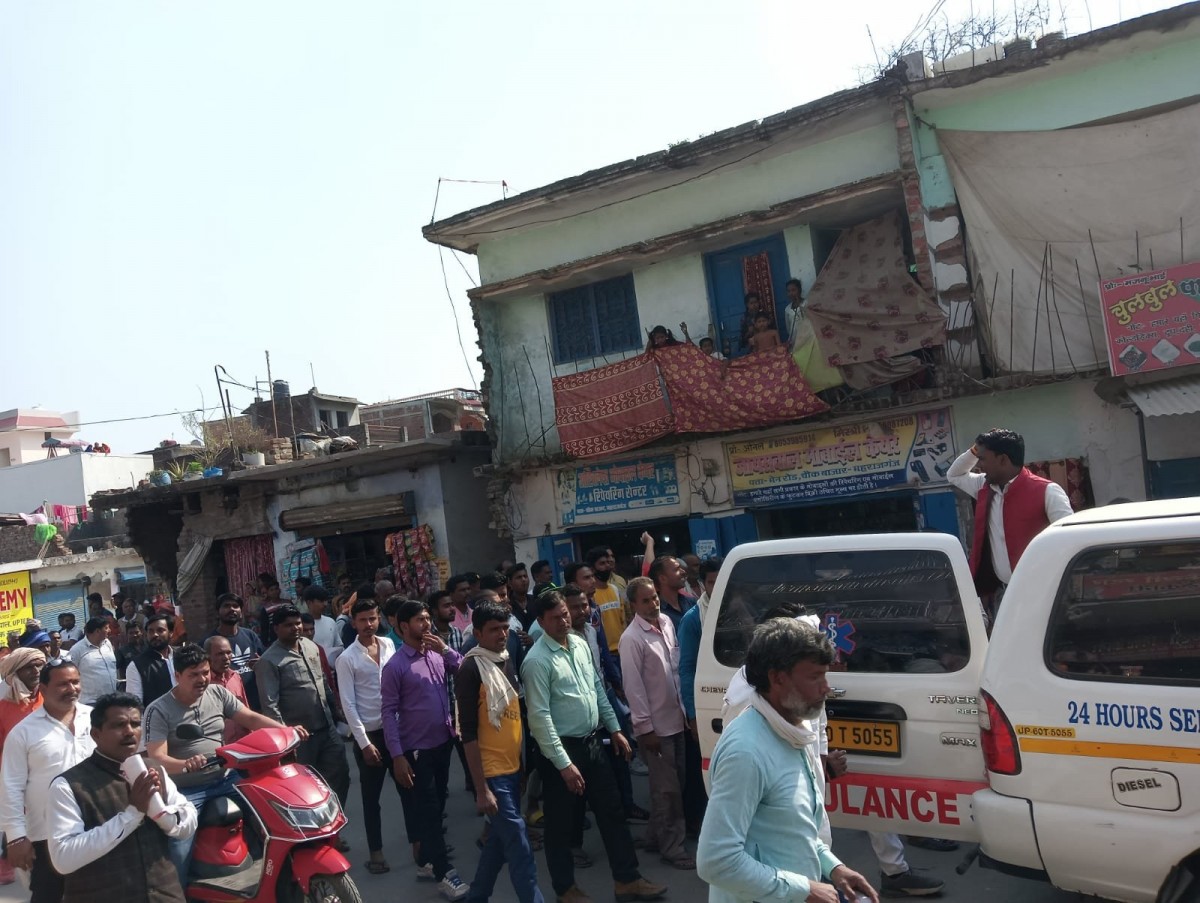 Mangal unsuccessfully contested from Maharajganj thrice and joined the Samajwadi Party after the 2017 assembly polls.

Though he was a strong contender, the SP this time handed the ticket to its ally Suheldev Bharatiya Samaj Party candidate, Geeta Ratnam. Mangal rebelled against the SP and got in the fray as an independent but the situation took an unexpected turn because of his sudden illness.

Mangal has said that he had no ailments except diabetes. However, doctors at the hospital found blockage in his arteries and implanted two stents.

In his campaign, Mangal proclaimed how he had been doing public service for the past 20 years but was not given a chance to contest polls. “Now the public is rooting for me,” he says. “People will give me a new lease of life by voting for me.”

A supporter, Ashok Manav, has even composed a song and released it on social media in which he makes an ardent appeal for Mangal.

The SP won the Maharajganj seat in 2007 and 2012 but in 2017 it went to the Bharatiya Janata Party. Nirmesh Mangal contested all the three elections on a BSP ticket and came second. In 2007, he lost by only a sleek margin of 889 votes.

This year, the BJP has nominated its sitting MLA Jaimangal Kanojia from the seat. In addition to SBSP’s Geeta Ratnam, Om Prakash is in the fray from the BSP and Alok Prasad, from Congress.

These parties were the main contenders in the ongoing polls until Nirmesh Mangal began his ambulance campaign, which has thrown political equations of the seat completely off balance.

Though Yadav was a strong contender from the SP, the party handed the ticket to sitting MLA Jai Choubey, who is a BJP turncoat. On the other hand, the BJP has fielded Ankur Tiwari, a fresher, from the seat. Peace Party President Dr Ayyub is also contesting the polls on this Muslim-majority seat and is supported by the All India Majlis-e-Ittehadul Muslimeen. The BSP has nominated Aftab Alam while the Congress has fielded Amarendra Bhushan here.

After being denied a ticket by the SP, Subodh Yadav defected to AAP. His mother Phula Devi and siblings are running the campaign alongside him. A large number of youth often throng his rallies where he regularly mentions his father, Bhalchandra Yadav, and turns emotional. 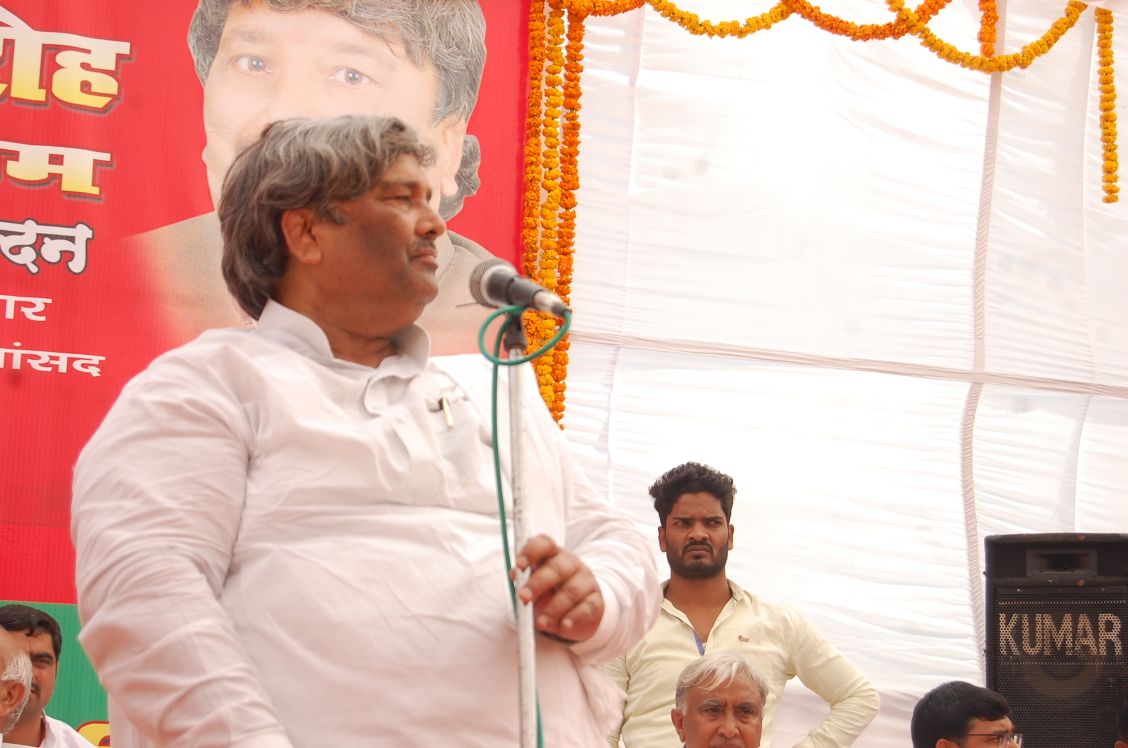 “If my father were alive, my family and I wouldn’t have to enter politics and face all this hardship,” he says. “Father didn’t leave us anything except his guidance as we follow his path of public service. Even on his deathbed, he told me to serve the people.”

Bhalchandra Yadav, a popular local leader of Sant Kabir Nagar and a two-time MP, passed away in October 2019. He was elected MP from SP in 1999 and from BSP in 2004. He contested the 2019 Lok Sabha elections from Congress but lost.

Witnessing a wave of sympathy in favour of Subodh, AAP has been relentlessly promoting him for the seat. While party convenor and Delhi chief minister Arvind Kejriwal paid a visit to the constituency, Rajya Sabha member Sanjay Singh also held several rallies here. Meanwhile, AAP leaders appear quite certain that the seat is a strong avenue for the party to make inroads in UP’s political arena.

SP president Akhilesh Yadav must also have sensed Subodh’s influence in the constituency, which is why, addressing a rally in Khalilabad on Monday, February 28, he said, “Tell me, is there anything wrong? I have a feeling that something is wrong. Is a broom (AAP’s electoral symbol) making a sweep or something? Is anyone getting swept by it? We got muddled in it once, but we were saved, weren’t we? Tell me, will you not save us this time around too?”

The SP candidate in Gorakhpur’s Pipraich, Amarendra Nishad, was also seen shedding tears in many rallies recently. Remembering his father, Jamuna Nishad, while addressing Akhilesh Yadav’s roadshow at Bansthan on Saturday, Amarendra Nishad choked up on stage. His mother, former MLA Rajmati Nishad, went to console her son but burst into tears as well. 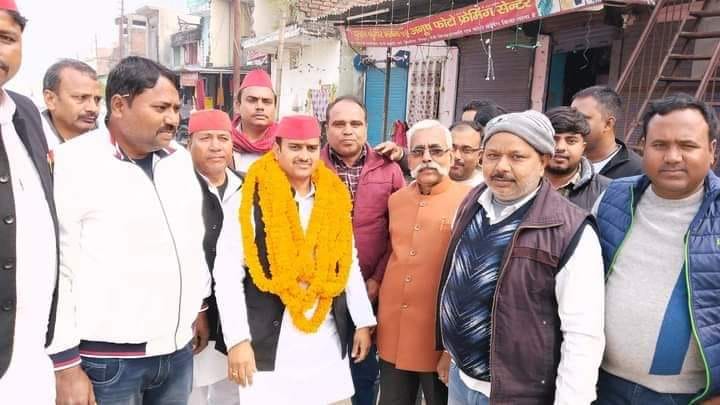 In his address, Amarendra Nishad said, “My father was active in politics for years but amassed nothing for his family. We no longer have our father to support the family. Now, the people of this constituency are our only support.”

Also read | Gorakhpur: A Pilot, an Actress Among SP’s Candidates from Nishad Seats

He also alleged that the treatment meted out to him during the block president elections was part of a conspiracy to murder him, just as his father was allegedly killed. 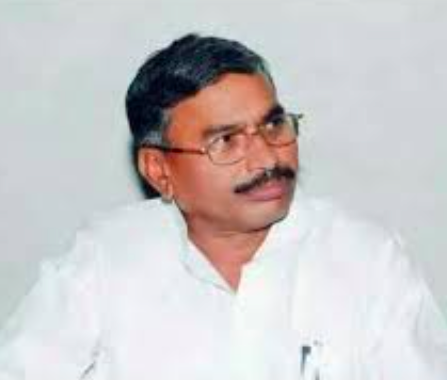 Amarendra Nishad had unsuccessfully contested the previous election on an SP ticket and finished third. The BSP had come in second while the BJP’s Mahendra Pal Singh won from the seat.

Pipraich is a Nishad-dominated constituency. In the 2007 assembly elections, Jamuna Nishad was elected as the MLA from Pipraich on a BSP ticket and was appointed the minister of state for fisheries and military welfare.

A year later, he and his supporters reached the Kotwali police station in Maharajganj to demand action from the police in the case of an alleged rape of a girl from the Nishad community. In the scuffle that ensued, shots were fired and a police constable died. A case was subsequently registered against him and others and he was sacked from his ministerial post.

Jamuna Nishad was killed in a road accident in 2010 and in the by-election held after his death, his wife Rajmati Nishad contested for the SP and was elected an MLA. She won again in 2012.

Jamuna Nishad challenged Adityanath thrice in Gorakhpur. Though he did not win, he did give a tough fight on two occasions.

Nishad was a towering figure in the politics of Gorakhpur and surrounding areas, especially among Nishad leaders across party lines, who still look up to him.

Meanwhile, SP candidate Shubhavati Shukla, who is pitted against Adityanath in Gorakhpur Urban assembly constituency, is often seen in tears, remembering her late husband Upendra Dutt Shukla and how his own party, the BJP, deserted him and neglected his family after his death. 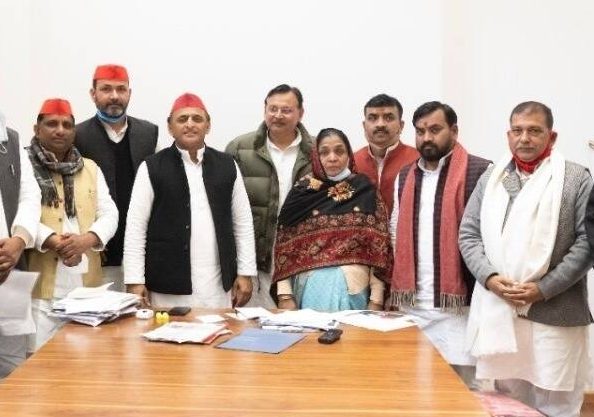 In several interviews, she has reiterated that no party leader paid a condolence visit to the family after her husband passed away.

As tears roll down her face, her sons are often seen consoling her. In a roadshow in Gorakhpur on February 27, Akhilesh Yadav referred to Shubhavati Shukla as “samajwadi mata (socialist mother)” and claimed that a lot of injustice has been done to her.

Shukla, who passed away last year, was the regional president of the BJP. He had contested the 2018 Lok Sabha by-election from Gorakhpur on a BJP ticket, but lost.

Shukla had contested thrice from the Kauriram assembly constituency (Gorakhpur Rural, after delimitation), but was defeated all three times. BJP had denied him a ticket on two occasions.