UP: Is the Film City Project Part of Yogi Aditynath's Plan To Recast His Image?

The BJP chief minister has thrived so far on the politics of religious polarisation, but has come up short on the development front.

Yogi Adityanath meets film personalities during a meeting on setting up a film city in UP. Photo: PTI

Lucknow: Uttar Pradesh chief minister Yogi Adityanath may be going hammer and tongs about building a film city together with a financial city close to the proposed international airport at Jewar, in the vicinity of the national capital, New Delhi.

But that gives rise to a million dollar question – how would proximity to an international airport make any difference to script the success of such an ambitious project? After all, a film city in Uttar Pradesh is not likely to attract filmmakers from anywhere across the globe.

Several groups of film and stage artists have urged the chief minister to recall his decision on setting up the film city around Greater Noida. While they welcome the concept of the film city, their common refrain is, “Why not in the vicinity of Lucknow?” Led by well-known stage and film actor Anil Rastogi, they sought to argue that Lucknow was not only endowed with multiple locations where many films had already been shot, but it was also a repository of culture, art as well the home for many artistes. “The proposed location in the Yamuna Expressway Authority will only benefit the people of Delhi while depriving the sons of UP’s soil,” said one of them.

Yet, the UP government officials were busy justifying the selection of the location by claiming that such a big land parcel was not available anywhere else in the vicinity of the national capital. However, that comes in sharp contradiction to the offer of 500 acres of land in Noida by the local authority’s CEO Ritu Maheswari. Apparently, because the UP chief minister wanted his film city to be larger than any other in the country, he did not find the 500 acres of land sufficient.

And his mandarins found it convenient to assert that a 1,000-acre plot was available only in the Yamuna Expressway Industrial Development Authority area.

By all accounts, Yogi Adityanath’s move to suddenly go full steam for the film city and financial city was prompted by his urge to re-cast his image from that of a rabble-rousing master of religious polarisation to a development-oriented ‘vikas purush’.

The idea is understood to have been planted by his inner coterie of advisers, who felt that a change of image could pay dividends in the next state assembly elections, some 18 months from now. Evidently, the last election in 2017 was won largely in the name of Narendra Modi. Perhaps that was why Yogi seemed all set to try and add his own value to the next poll campaign.

The first signs of his projection as someone inclined to take UP on the path of development became visible last month, when the state jumped ten notches to emerge as number two in the country on the ‘ease of doing business’ rankings. And now the proposal to build a film city and financial city has come in handy to project him as the “development man”.

While the proposed film city was being showcased as a larger version of existing ones in Mumbai or Hyderabad, the idea of a financial city was taken from Gujarat. It was another matter that the Gujarat model – Gujarat International Financial Tech-city (GIFT) – has ironically remained a non-starter. Yet, the UP chief minister was impressed by the concept which would facilitate banks and financial institutions to set up their units to create a financial hub in the vicinity of the film city.

Yogi left no stone unturned to roll-out a red carpet before a group of persons from Bollywood, who were led to believe that UP was going to soon create India’s largest and best-equipped film city.

What was, however, clearly visible was that the meeting was organised in haste, as it could not ensure the participation of very many filmmakers or producers. Other than Satish Kaushik, Vivek Agnihotri and Ashok Pandit, who happens to be the chairperson of a lesser-known film producers’ association, those who flew down to attend the meeting were actors, singers, lyricists, stand-up comedian or screenwriters. These did include some big names like Anupam Kher, Udit Narayan, Anup Jalota, Kailash Kher, Raju Srivastava and Manoj Muntasir, but none of them are in the business of making films. 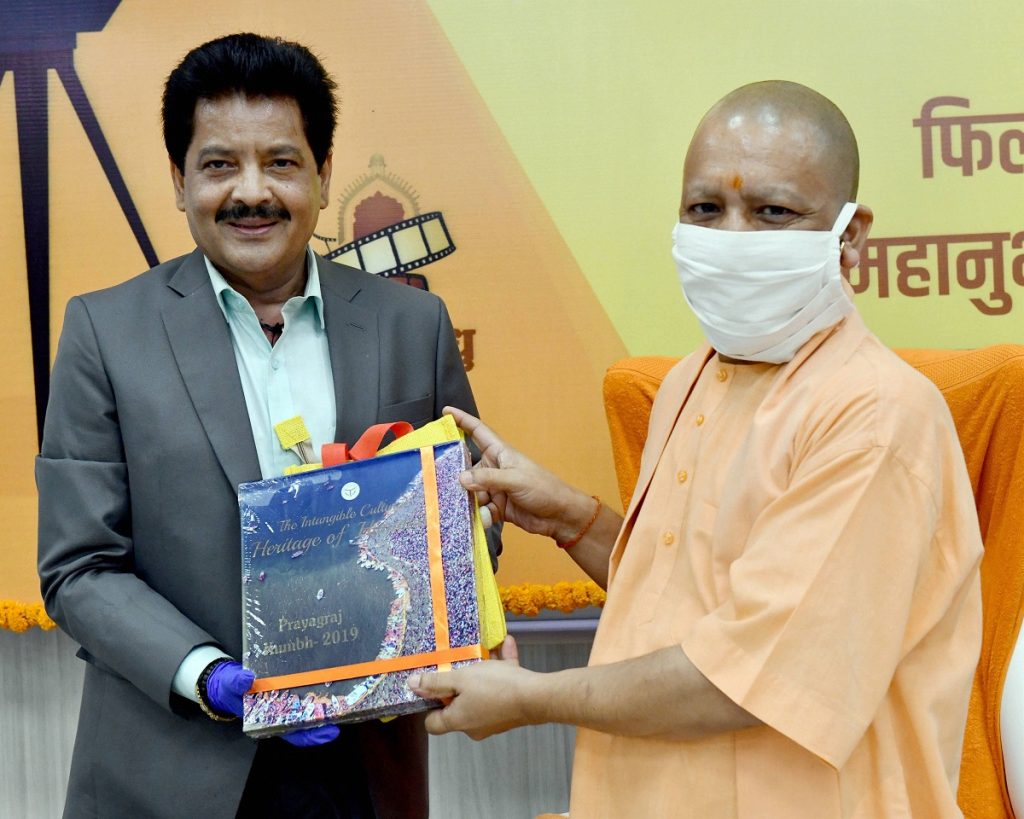 What impetus they will give to the proposed project in the absence of many filmmakers is the million dollar question. Yet, there can be no denying that the chief minister has set the ball rolling for throwing open an avenue which several preceding governments tried to initiate without making much headway.

The first time that a film city was conceived in UP was in Sector 16 of Noida, where a 100-acre area was earmarked for the purpose by the then Congress regime. Over the years, it turned into a media hub and today it has studios of many major TV news channels and the offices of some big corporate houses.

In the recent past, it was the Samajwadi Party chief minister Akhilesh Yadav who mooted the idea of two film cities in the state in 2015. One of these was proposed along the 300-km Lucknow-Agra Expressway and the other in Trans-Ganga Industrial city (in Unnao district), about 55 km from the state capital, Lucknow. An MoU was signed in the presence of famous Bollywood producer Boney Kapoor and Ravi Kishen, the well-known face of Bhojpuri films who is now a BJP MP from Gorakhpur.

The development of the film cities was to be undertaken on a public-private partnership model. While the Agra expressway film city was to be set up in collaboration with the Mumbai based Purple Seas company, the Unnao project was to be undertaken by a consortium led by Ravi Kishen. However, both projects continued to remain in their nascent stage until the fall of the Akhilesh government and were finally abandoned by the current Yogi regime.

Three-and-a-half years down the line, Adityanath has given a re-birth to the long-cherished idea of a film city, with all the ingredients of a mega-project. Of the three options put forth by officials of Noida, Greater Noida and the Yamuna Expressway Authority, the chief minister gave his final nod to the biggest land parcel of 1000 acres in sector 16 of the Yamuna Expressway Authority, in the vicinity of Greater Noida. The site was presented as the most strategic one – “barely 50 km from the national capital and just 5 km from Jewar“, where the construction of the country’s “biggest international airport” together with an aviation hub is already underway.

Interestingly, all the other attractions and incentives showcased by the chief minister appeared like old wine in a new bottle. A film policy drafted during the Akhilesh government was given a few twists and turns to be presented as a new film policy sometime last year.

Sure enough, it has all the incentives for filmmakers who choose UP as their destination. Thus a subsidy up to Rs 2 crore was offered. Now the amount would vary, depending on the length of the shooting in locales of UP, besides other factors. The subsidy level has been maintained exactly how Akhilesh Yadav had proposed in the original draft. Any filmmaker shooting more than 50% of the film in UP would be entitled to a subsidy of Rs 1 crore. This could be raised to Rs 2 crore if 75% of the shooting is in UP. Besides, if four key artistes in the script were to be hired from within the state, the producer would get an additional ex-gratia payment of Rs 25 lakh. This figure would be raised to Rs 50 lakhs if the entire cast is picked up from within the state.

The chief minister made it a point to tell the Bollywood group, “In UP, we have exotic locations; we have cultural diversity; we also have human resource; and now we are going to have a film city with state of the art facilities, which will be way ahead of what any other film city across the country can offer.” 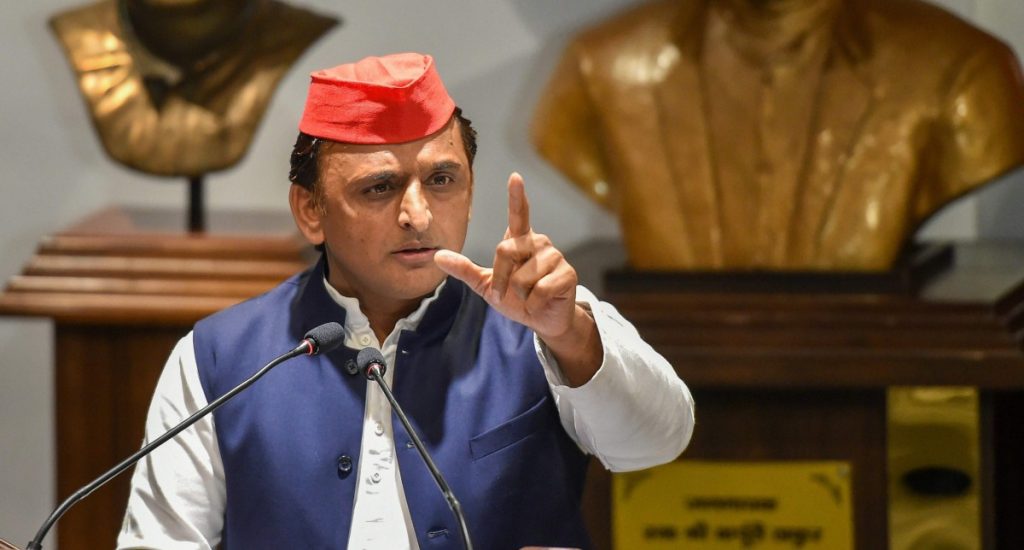 But what evokes scepticism is the bigger question – whether the 18-odd months that Yogi has at hand before the elections are really enough to realise his mega dream project and to propel himself as a ‘vikas purush’.

In the three-and-a-half years that have gone by, Yogi managed to thrive largely on the politics of polarisation. On the development front, he found it convenient to simply give a saffron wrap to projects initiated by his bête noire and predecessor Akhilesh Yadav, proclaiming them as his “achievements”. Be it the Lucknow Metro Rail, the international cricket stadium, the cancer hospital and even the 300-km  world-class Lucknow-Agra Expressway, Yogi Adityanath has never missed an opportunity to take the credit by beating his own trumpet for the success of these projects. Apparently, there is very little of his own to showcase on the development front, at least so far.