UP Polls: In Samajwadi Party’s Quest for Winnability, Will Muslim Representation Take a Hit?

Leaders in the party say they are ring-fenced by the BJP's aggressive religious polarisation, meaning the party may not field as many Muslim candidates as it usually does. 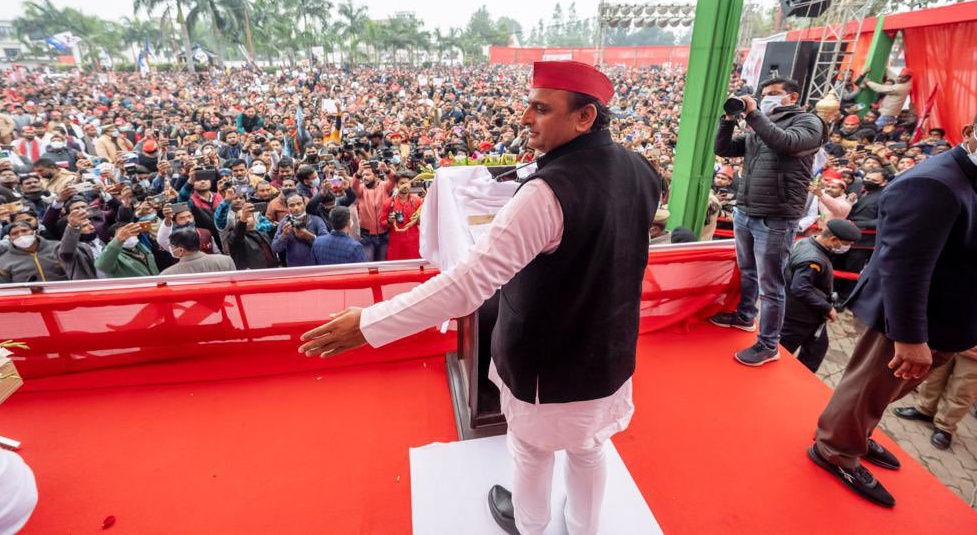 Lucknow: Uttar Pradesh chief minister Yogi Adityanath’s remark on Monday calling the state’s assembly elections as an “80 versus 20 battle”, alluding to the population shares of Hindus and Muslims in the state, was yet another indication that the ruling Bharatiya Janata Party (BJP) will be banking primarily on religious polarisation.

With the BJP government facing palpable anger on a range of issues like delay in agricultural payments, lack of any visible improvement in rural infrastructure, the deepening problem of stray cattle, price rise and unemployment, it appears that the chief minister is willing to entirely dump his “development agenda” in order to fuel the religious divide in the run-up to the polls – which will be held in seven phases between February 10 and March 7.

He had earlier hinted at such a possibility with a dig at the Samajwadi Party (SP) when he identified the Akhilesh Yadav-led party as “people who say abba jaan”. His remark on Monday, summing up how he views the assembly elections, has only cemented such an understanding.

The BJP’s strategy, however, has put its primary challenger, the SP, in a tight spot. Given a likely scenario in which the upcoming polls may see sentiments of Hindu-Muslim polarisation ruling the minds of voters, SP leaders are now contemplating whether it should field an adequate number of Muslim leaders in the electoral fray or not.

A top-level SP leader, who requested anonymity, told The Wire, “The BJP’s campaign to consolidate Hindus by alienating Muslims proved to be effective in three successive elections – two parliamentary and one assembly – since 2014. We have seen how Muslim representation in elections was projected by the BJP as ‘Muslim appeasement’. Our campaign until now has strictly been on a development agenda. We want to prevent any polarisation. So, we may field fewer Muslim candidates in the upcoming polls.”

The SP has until now focussed on the alleged failures of the Adityanath government, attempted to accommodate the hitherto under-represented communities among the Hindus and allied with parties that largely represent the interests of single-caste OBCs to project an inclusive image. But it has also stopped short of adequately addressing the fear among the Muslim community that is quite palpable in UP, which has seen an unprecedented rise in hardline Hindutva politics under Adityanath’s regime.

The general understanding in the SP is that if Akhilesh Yadav brings himself to a position in which he is perceived as the primary challenger to the BJP, a large majority of the state’s Muslims will consolidate behind the party to prevent the saffron party from coming to power again. This may or may not prove to be the case, as past trends have shown that the Muslim community does not vote as a bloc. Their votes have been split between the SP, the Bahujan Samaj Party and the Congress.

However, the SP is working on the assumption that it can consolidate the Muslim community along with a large section of OBCs, including the non-Yadav communities. It believes so because UP, which has historically seen either a three or four-cornered contest, is mostly going to be a bipolar contest between the BJP and the SP in the elections, given the declining influence of the BSP in the current scenario.

Also Read: The UP Assembly Polls Are Almost Here – But Where Is BSP?

Not just an ideological dilemma

In most constituencies of the state, patronage networks of leaders define the electoral outcome. More often than not, caste and community equations are intricately intertwined with these networks. In such a situation, voters rally behind their leaders who come from the dominant castes of those constituencies. Political parties field their candidates keeping these samikaran or caste equations in mind. These decisions are often reached mathematically with the caste and community composition of constituencies in mind – a competitive political game in which one locally-constructed social alliance attempts to defeat another.

However, the BJP’s strong focus on religious polarisation has been able to offset many such caste and community alliances on the ground. For instance, in western UP’s 140-odd seats, communal polarisation by the BJP succeeded in consolidating all Hindu communities against the Muslims. In the last few elections, the saffron party has almost swept all seats with this tactic.

The farmers’ movement turned the dominant Jats, who had become the biggest foot soldiers of Hindutva in the years following the 2013 Muzaffarnagar riots, against the BJP. Therefore, the SP’s alliance with the Jat-dominated Rashtriya Lok Dal in the region is being seen as the harbinger of Jat-Muslim unity once again, raising the hopes of the opposition alliance. However, a majority of Jat leaders in the Muzaffarnagar-Shamli-Baghpat belt are concerned that fielding a Muslim candidate may open up some room for the BJP to polarise the electorate on religious lines again. “The farmers’ movement has definitely brought the Jats and Muslims closer to each other. But relations take a long time to heal. Since both communities harbour political aspirations, an electoral battle between them in a scenario where a Jat candidate is pitched against a Muslim leader can open up wounds again,” an SP district president of the region, who also belongs to the Jat community, told The Wire.

The Wire has learnt that the RLD is likely to get 32 seats in the region, and its leader Jayant Choudhary wants to field Muslims in 20% of these seats. Four of these seats in which the RLD is thinking of fielding Muslim candidates are Thana Bhawan, Meerapur, Baghpat, and Gangoh. “All these seats have seen strong religious polarisation in the past. It is really a hard choice to make,” said the leader, who added that he has been getting multiple calls from community leaders to not field a Muslim candidate in these constituencies.

Similarly, in other constituencies like Katra Bazar in Gonda, Mohammadi in Lakhimpur Kheri, Misrikh in Sitapur, last-minute low-intensity communal conflicts have dictated the outcome in favour of the BJP. These are assembly seats where Muslims form a sizeable number, and ideally should be given representation in the electoral fray – but the BJP’s hardline tactic has pushed most opposition parties into thinking whether winnability or representation and social justice should dictate their choice of candidates.

Against such a backdrop, the SP is also facing criticism from the Asaduddin Owaisi-led All India Majlis-e-Ittehadul Muslimeen (AIMIM) – which is also contesting in Muslim-majority seats – for compromising its social justice agenda. The AIMIM leaders have been lashing out at Akhilesh for “neglecting” Muslims and their political aspirations even as the SP began reaching out to under-represented communities among the Hindus and advocating for bhagidaari politics.

It is clear that the SP is trapped within the perimeters of a majoritarian agenda powered by the BJP’s aggressive Hindutva campaign. But opposition leaders believe that if any opposition party has to come to power, it has to take political decisions within the current political context.

In that regard, UP has already taken a majoritarian turn. In 2012, when Akhilesh Yadav came to power, the assembly had 69 Muslim legislators. The number declined to 25 in 2017 and the BJP did not field even a single Muslim candidate. In the run-up to the 2022 polls, however, Akhilesh has been successful in pushing livelihood concerns to the fore to counter the BJP’s umpteen attempts to polarise society on religious lines. The SP plans to keep invoking those issues. “Our vision is clear. We want to form a government that takes all communities forward together. But we also don’t want to give any room to the BJP to deflect the attention of the electorate from the government’s failures,” said the Lucknow-based SP leader. 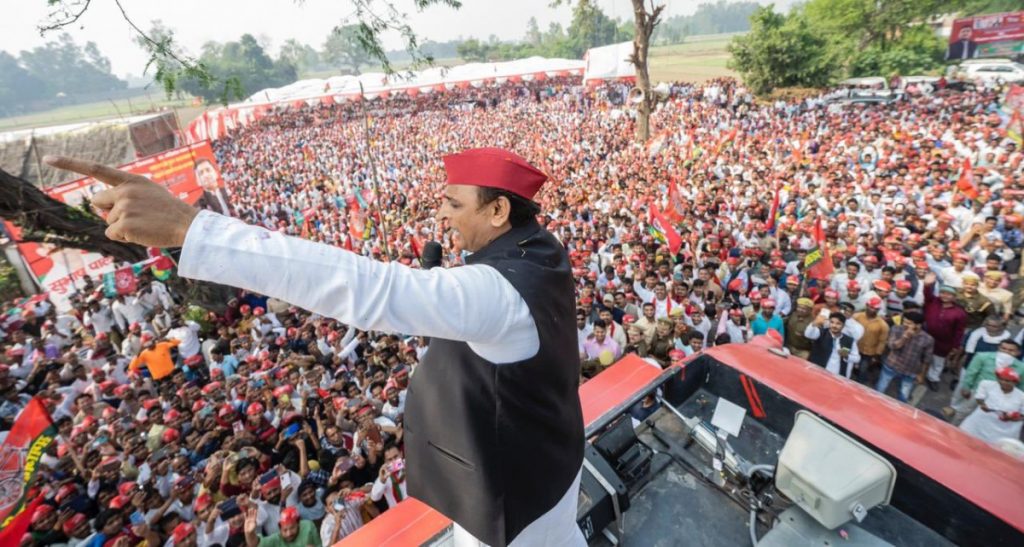 Akhilesh has until now dodged all questions from the media and the BJP that seek to bracket the SP as a “Muslim-Yadav party”. He has focused on developmental issues and made successful attempts to reach out to non-Yadav OBCs, a majority of whom have been voting for the BJP in the past few elections.

The SP’s intent reflects in the way Om Prakash Rajbhar, one of the major allies of Akhilesh Yadav, responded to Adityanath’s “80 versus 20” remark. Rajbhar said that the electoral battle is actually a contest between the 85% and the 15%, in an apparent reference to the state’s backward communities, which constitute 85% of the population.

In trying to consolidate backward Hindu communities, the SP will have to dodge Hindutva-engineered polarisation. In that course, it seems likely that its tradition to justly represent minorities in the electoral fray will take a backseat.