Stage Set for Second Phase in Nine UP Districts, Security Ramped Up in 'Sensitive' Zones 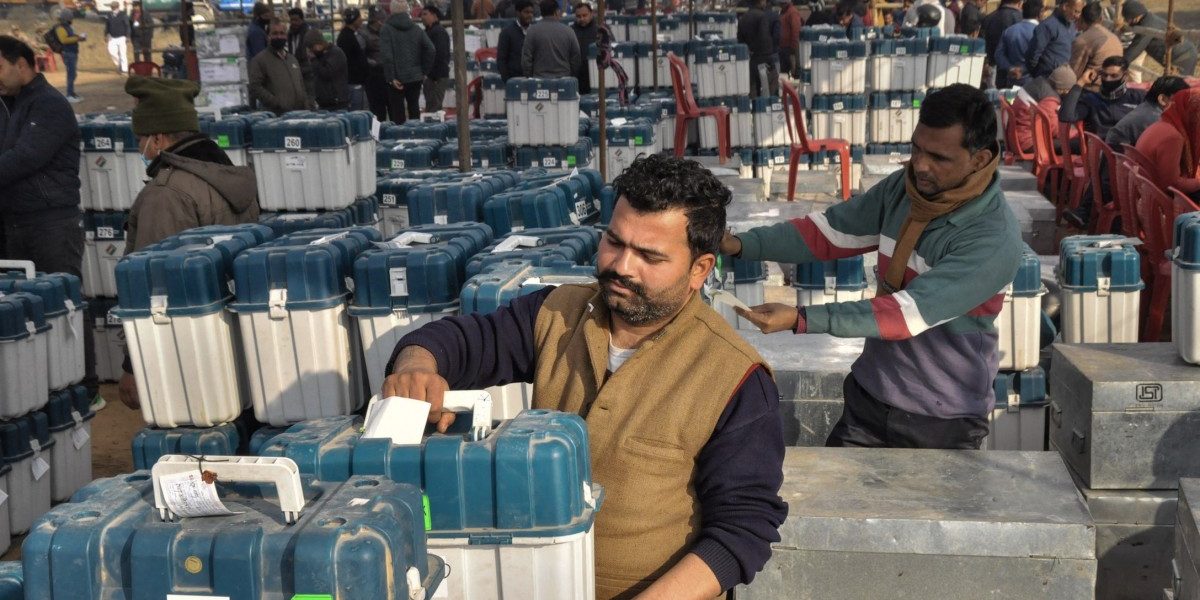 Polling officials in Moradabad on the eve eve of the second phase of the Uttar Pradesh assembly elections, February 13, 2022. Photo: PTI

New Delhi: Uttar Pradesh will go to the second of seven phases of polling today in nine districts. Up for grabs are 55 assembly seats, and voters are set to decide the fates of 586 candidates.

In eight constituencies in districts Bijnor, Sambhal and Saharanpur that have been termed as ‘sensitive’, the UP Police has ramped up security with an extra vigil by central forces and state police. An eye will also be kept on social media at all times, the police said. A constituency with rivalry between political parties, presence of criminals, communal and caste-based tensions is declared ‘sensitive.’

Polling officials collect election materials at a distribution centre on the eve of the second phase of the Uttar Pradesh assembly elections, in Moradabad, February 13, 2022. Photo: PTI

In the 2019 Lok Sabha elections, the BJP went on to win with the highest vote share – 37.36%. – that any party has won in decades. Even then, the BJP had only won three seats out of the nine districts, with the remaining six going to the SP-BSP alliance. This suggests that this is a challenging region for the BJP.

With a sizeable Muslim population, these districts are considered to be the strongholds of the Samajwadi Party. Out of the 15 candidates in the previous assembly election, 10 Muslim candidates had emerged victorious.

In the 2017 UP assembly elections, the BJP had won 38 seats out of the 53 seats, while the Samajwadi Party had won 13, and two each by Bahujan Samaj Party (BSP) and the Congress.

The SP and the Congress had formed an alliance during this election.

The Congress and BSP, which had fought in alliance with the SP during past two elections (assembly polls and Lok Sabha elections), are contesting on their own.

With a change in dynamics, it will be interesting to see the performance of the BSP and Congress, which have previously won seats in this region in an alliance with the SP.

The SP has aligned with smaller regional parties and representatives from several OBC communities such as Jat, Maurya, Saini, Kushwaha and Rajbhar. Senior Samajwadi Party leader Mohammad Azam Khan, who is fighting the elections from behind the bars, is among the prominent faces in this phase.

He is contesting from his stronghold Rampur seat, while his son Abdullah Azam is debuting his political career from Suar where he is up against Haider Ali Khan, the grandson of former MP Begum Noor Bano. Khan is fighting on an Apna Dal Sonelal ticket, a BJP ally.

Dharam Singh Saini is a prominent face in this phase who emerged out of the wave of shifts of BJP ministers and leaders to the SP after the polls were declared. He will be contesting from Nakud on a SP ticket.

From the BJP, UP Finance Minister Suresh Khanna, incumbent Jal Shakti state minister Baldev Singh Aaulakh are two heavyweights who will be contesting from the Shahjahanpur and Bilaspur constituencies.

BJP’s Gulab Devi, the State Minister for Secondary Education in UP, who is contesting from Chandausi has previously been elected four times.

Chhatrapal Gangwar, the current Minister of State for Revenue, is contesting from the Baheri Assembly Constituency on a BJP ticket.

Also read: Adityanath Ramping Up Anti-Minority Rhetoric Is an Act of Desperation Amid High-Profile Exits

Supriya Aron, former Bareilly mayor will be contesting from Bareilly Cantonment on a SP ticket after leaving the Congress party along with her husband and former Congress MP Pravin Singh Aron.

There has been an aggressive campaign from all parties for this phase, including the hurling of many allegations.

While campaigning for the BJP, Prime Minister Narendra Modi attacked the SP and said that it is important to re-elect the BJP, in order to keep the area “riot-free”. He also said that the SP has fielded even anti-nationals in the election. The PM even referred to the legislation against triple talaq.

While BSP leader Mayawati attacked the SP government for ‘ending’ Jatav-Muslim brotherhood, the Congress continued its campaign on women welfare.