Charting the Historial and Developmental Trajectory of Uttar Pradesh

Yogi Adityanath recently compared Uttar Pradesh with states that have very different contexts. But what does the state's political history tell us about development and progress? 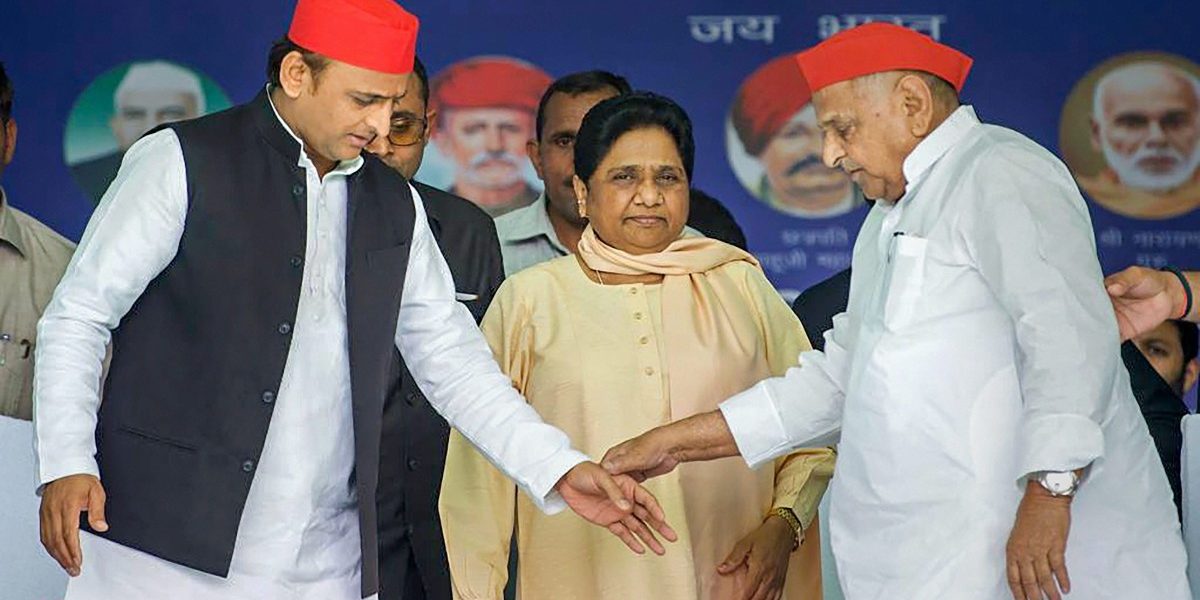 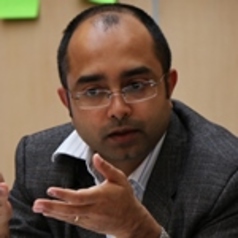 Uttar Pradesh chief minister Yogi Adityanath’s recent barbs against Kerala, West Bengal and Jammu and Kashmir invited justified rebuttal from political and economic commentators. Heading India’s largest state, Adityanath could have avoided embarrassment had he studied the historical and developmental trajectory of his own state instead of making pointless comparisons with other states that have very different contexts from Uttar Pradesh.

In terms of human development, UP has fared well over the last two decades, even if not better than BIMARU states. Therefore, instead of fomenting hate and disgust against other states, the chief minister could have demonstrated pride and enthusiasm in UP’s own record of improving human development indicators over the years.

Uttar Pradesh was established as the United Provinces of Agra and Oudh under the colonial administration in 1902. Sprawled across the Indo-Gangetic plains of northern India, UP emerged as the hotbed of the anti-colonial struggle led by the Congress party. As India inched closer to independence, the state’s Congress leaders saw for themselves a greater role in national politics. With the partition of Bengal, UP emerged as the largest province of post-colonial India, its leaders determined to shape the politics of the country. The result was neglect of development within the state.

Political instability marred UP since India’s independence in 1947. Although the Congress won decisive majorities in legislative assembly elections held in 1952, 1957 and 1962, no chief minister completed a full term in the state. After 1967, political instability became even more acute, as power rotated between the several parties that competed for dominance in the state without, however, managing to complete a full term. It was only as late as 2012 that Mayawati became the first chief minister to complete a full term in office.

The Congress dominated UP politics for the first two decades after Independence, mirroring the national trend. Its leadership was almost entirely in the hands of “upper castes”.

Furthermore, the Congress chief ministers of UP were mostly accountable to the party’s national leadership rather than to their constituents. Therefore, although the party won decisive majorities in the legislative assembly elections held in 1952, 1957 and 1962, no chief minister could complete a full term in the state. The “upper-caste” dominance of the UP Vidhan Sabha coupled with the upward accountability of the state cabinet contributed to the continued neglect of the state’s development.

UP entered an extended period of political instability after 1967. The Congress Party lost power. The Bharatiya Lok Dal, led by the farmers’ leader Charan Singh, formed the state government for a brief period. Charan Singh was the first chief minister who came from outside the elitist “upper-caste” profile of previous chief ministers. However, his government was short-lived and soon, the Congress returned to power.

Over the next two decades, power in the state oscillated between the Congress and rival political parties. Although the social profile of the UP Vidhan Sabha became more representative of the state’s population, political instability made it impossible for any meaningful investment in the state’s development.

Upper-caste dominance of the state’s politics continued virtually unchallenged till 1989. Of the 12 chief ministers between 1947 and 1989, as many as ten were “upper castes”. They all were from the Congress. The two chief ministers outside this elitist social profile were from the opposition parties.

This elitist social basis of UP’s politics was disrupted in 1989. The Congress party collapsed in the Vidhan Sabha elections that year. The Janata Dal emerged as the single largest party in the state and Mulayam Singh Yadav was appointed chief minister. Among Yadav’s boldest, even if politically costly, decisions was to defend the mosque in Ayodhya. In October 1990, mostly “upper caste” Hindu devotees, under the leadership of the newly emergent Bharatiya Janata Party (BJP), defied court orders and descended upon the mosque, threatening to destroy it and build a temple in its stead.

Yadav ordered troops to fire at the illegal assembly of devotees, thus upholding the law. His actions endeared him to the state’s beleaguered Muslim minority as well as his own Yadav community but alienated the “upper caste” communities for decades to come.

Yadav was born into a community disparaged as “lower caste” and officially categorised as an Other Backward Class (OBC) community. Yadav embraced his OBC identity and espoused the politics that explicitly sought to advance OBC interests. He lent his weight to emerging demands for affirmative action in favour of OBCs across India and emerged as a key OBC leader in the country. Yadav’s emergence diversified the social profile of chief ministers to govern UP. 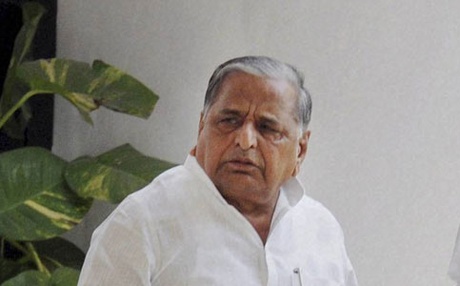 In 1993, he allied with the Bahujan Samaj Party (BSP), a party that emerged from the anti-caste social movement in the state to advance the claims of Dalits and other marginalised castes. Although that alliance was short-lived, it brought the BSP electoral gains and Mayawati took over the reins of power in 1995 to become the first UP chief minister to emerge from the Dalit community.

However, political instability continued to mar the state. Power continued to rotate between the SP, the BJP and the BSP as no government lasted its full term. This cycle was broken only in 2007, when the BSP under Mayawati won a decisive electoral majority and took power in the state.

The BSP’s absolute majority in UP has been attributed to its inclusive social coalition. Unlike its rivals, the BSP sought to build a rainbow coalition that included Dalits, “upper castes”, as well as Muslims. It also sought to include the majority of the “lower castes” except for the Yadavs, who were identified as being duty-bound to Mulayam Singh Yadav. The rainbow coalition forged by the BSP was like the social coalitions that fuelled electoral support for the Congress in the early decades after Independence.

However, two differences were crucial. While state leadership of the Congress held office at the pleasure of the party’s national leadership, Mayawati did not do so – she was also the national president of the BSP. She was only accountable to her electorate. Second, unlike the elite “upper caste” leadership of the Congress, the BSP’s leadership was self-consciously Dalit. As a party committed to improving the well-being of Dalits and other marginalised castes, the BSP also realised the impossibility of doing its work without a modicum of support from other social groups. This inclusive vision was outlined by its campaign slogan ‘sarvajan hitay, sarvajan sukhay’, which in English translates into “may everyone benefit, may everyone be prosperous”.

The BSP took development very seriously. Mayawati introduced and implemented a housing scheme for the urban poor. Of the 100,000 housing units promised, over 90,000 were constructed by the time her tenure as chief minister expired in 2012. She also inaugurated an integrated rural development programme to supply water, electricity and roads in villages with Dalit majorities. Almost 25,000 villages across the state saw improvements within their jurisdictions, and even her worst critics admitted that there had been some development under Mayawati compared to previous regimes. 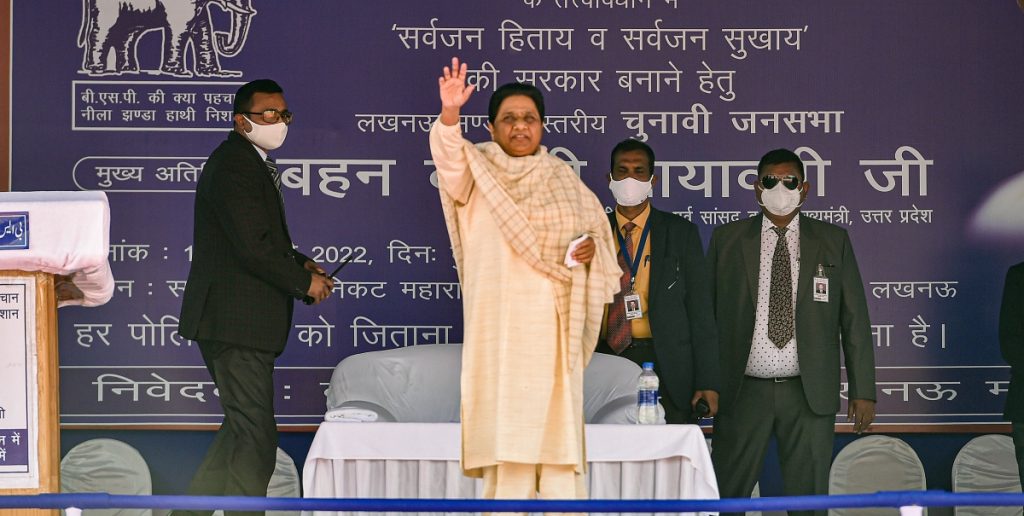 Even as the BSP government remained unable to introduce structural reforms that would transfer more productive assets to Dalits, its development programmes did reach populations that had hitherto been largely marginalised. Learning from the experience of neighbouring Bihar, Mayawati distributed one million bicycles to girls across the state in a bid to improve their access to schooling and general mobility. However, allegations of corruption overshadowed the developmental interventions introduced during her tenure and she was voted out of power in 2012.

The new government was formed by the Samajwadi Party (SP), led by Akhilesh Yadav, son of Mulayam Singh Yadav. The SP borrowed a page from the BSP’s success at forging social coalitions. It cemented the Yadav-Muslim coalition that lay at the foundation of his party’s ideology with support from the “upper castes”. Muslim representation in the UP Vidhan Sabha was at the highest since Independence and more closely reflected the community’s population than ever before. Although Yadav scrapped many schemes introduced by Mayawati, he also introduced several social welfare programmes including housing subsidies, pensions and unemployment allowances.

Furthermore, he distributed 1.5 million laptops to students who completed their secondary and senior secondary education across the state. But perhaps the highlight of Yadav’s chief ministership was the successful eradication of polio from the state. By 2013, the state had not reported a single case of polio, a major milestone in global health improvement. The involvement of Muslims in the SP’s social coalition helped to overcome worries from community members that the polio vaccine was aimed against them.

The social foundations of India’s national government were also considerably more diverse than the elitist Congress governments of the past. In 2004, the Congress-led United Progressive Alliance (UPA) was voted to power. It was no longer the dominant force it once was and relied upon coalition partners to form the UPA government. Between 2004 and 2009, it relied on its communist allies to sustain the government. After the communists withdrew support in 2009, it depended on the support from the SP and the BSP (among other state-level parties such as West Bengal’s Trinamool Congress and Bihar’s Rashtriya Janata Dal) to run the government. The UPA actively responded to the developmental challenges of the state governments run by its constituents and allies.

Also read: ‘Reclaiming Yellow From Saffron’: The Battle at the Heart of UP’s Shivpur

Improved human development indicators in UP since 2007

The human development outcomes of the inclusive social coalitions that governed UP between 2007 and 2017 are clearly discernible. Several of these outcomes pertain directly to the effectiveness of the state in delivering services. In this section, I draw on a comparison of data from the National Family Health Surveys (NFHS) 3 and 4.

NFHS-3 pertains to data collected in 2005-06, just a year before the BSP came to power in UP. NFHS-4 data pertains to the period 2015-16, a year prior to the SP losing power in UP. Both sets of data offer a useful insight into the changes in human development in the state through the inclusive governments of the BSP and SP.

For example, the proportion of children under five years of age, whose births were registered, increased from a mere 7% in 2005-06 to over 60%. Among its neighbours, only Bihar has a similar track record. 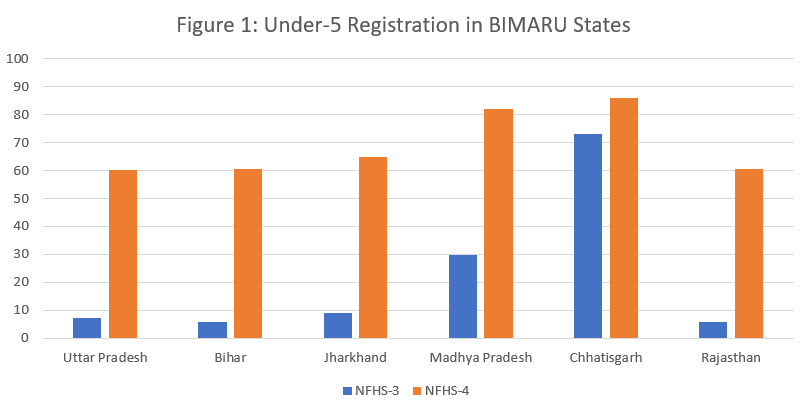 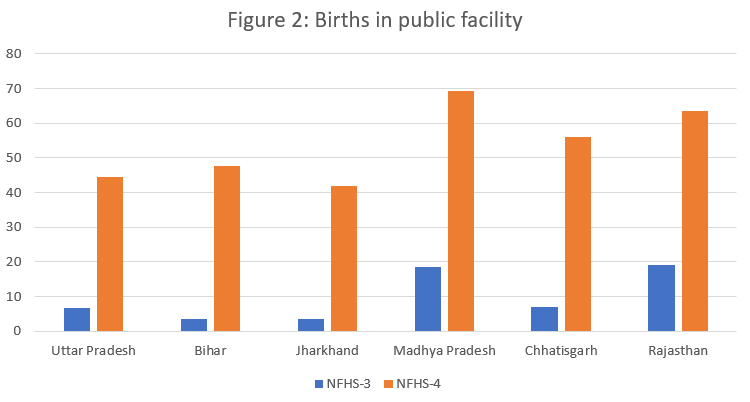 Immunisation rates improved. Mortality rates were reduced. A larger proportion of women reported a follow-up visit from a paramedic after the delivery. 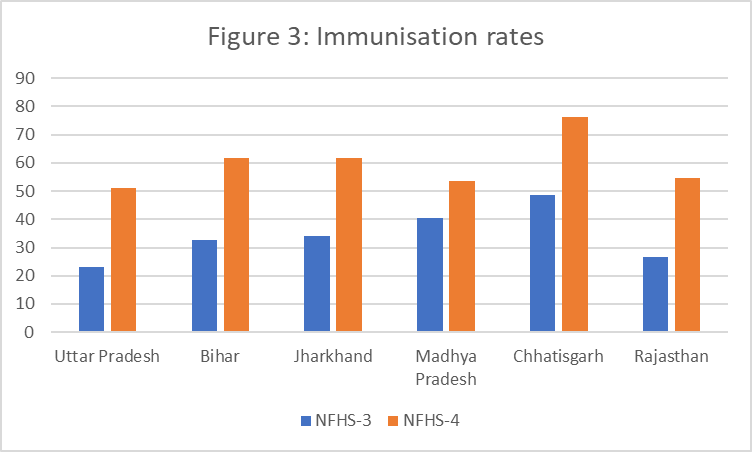 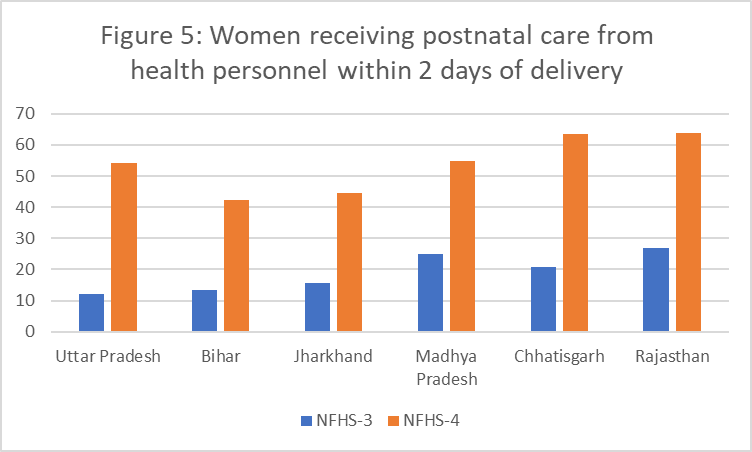 Women’s literacy rates increased to 61%, the highest among the BIMARU states except Chhattisgarh. The proportion of women with at least ten years of education also increased, placing UP ahead of the other BIMARU States.

Between 2005 and 2016, UP reduced the incidence of multidimensional poverty by almost 28 percentage points, from 68.8% to 40.8%. Given the size of the state and its enormous social heterogeneity, this was no mean achievement. 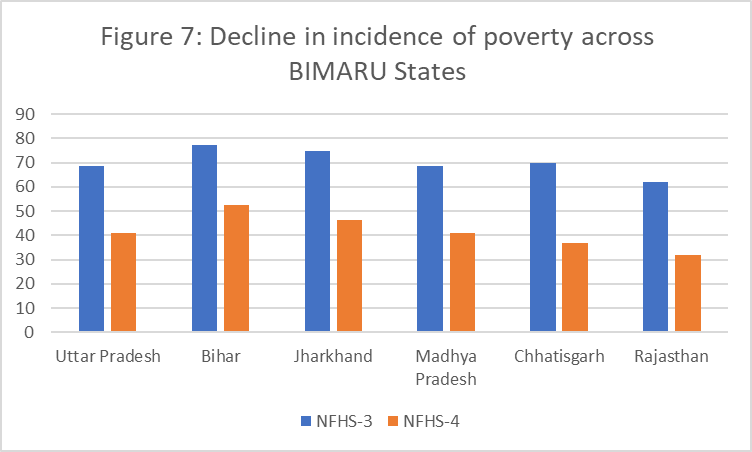 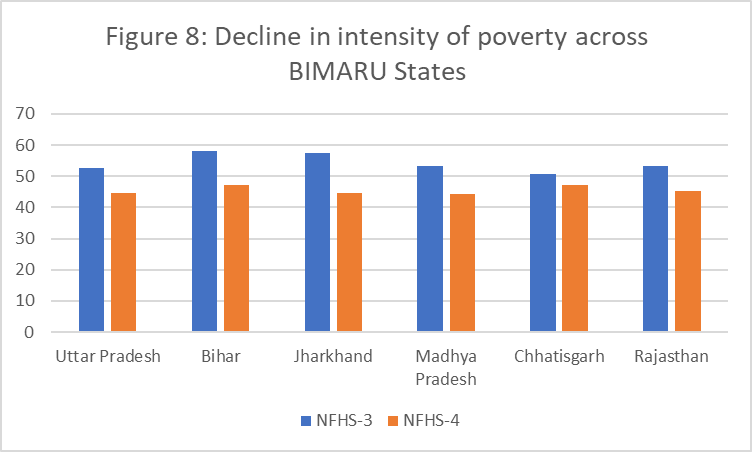 Adityanath would do well if he remembers that he is the chief minister of Uttar Pradesh, not merely the BJP’s representative like the previous Congress chief ministers.

He should take pride in the impressive improvements demonstrated by his state over the last two decades and give credit to his political opponents for having made this happen. The erosion of the elitist social coalition that underpinned Congress rule and the emergence of the inclusive social coalitions fostered first by the BSP and then by the SP helped the state to overcome decades, if not centuries, of human underdevelopment.

To be sure, neither the BSP government nor the SP regime was perfect. But for a sitting chief minister to deny previous governments’ contribution to UP’s human development while making unwarranted comparisons with other states is to make a mockery of the state’s inspiring strides in human development. A lot needs to be done. That does not mean a lot has not been done!