While the SP levelled allegations of conspiracy against the BJP and BSP and has filed complaints with the police and the election commission, the BSP has remained curiously silent on the matter. 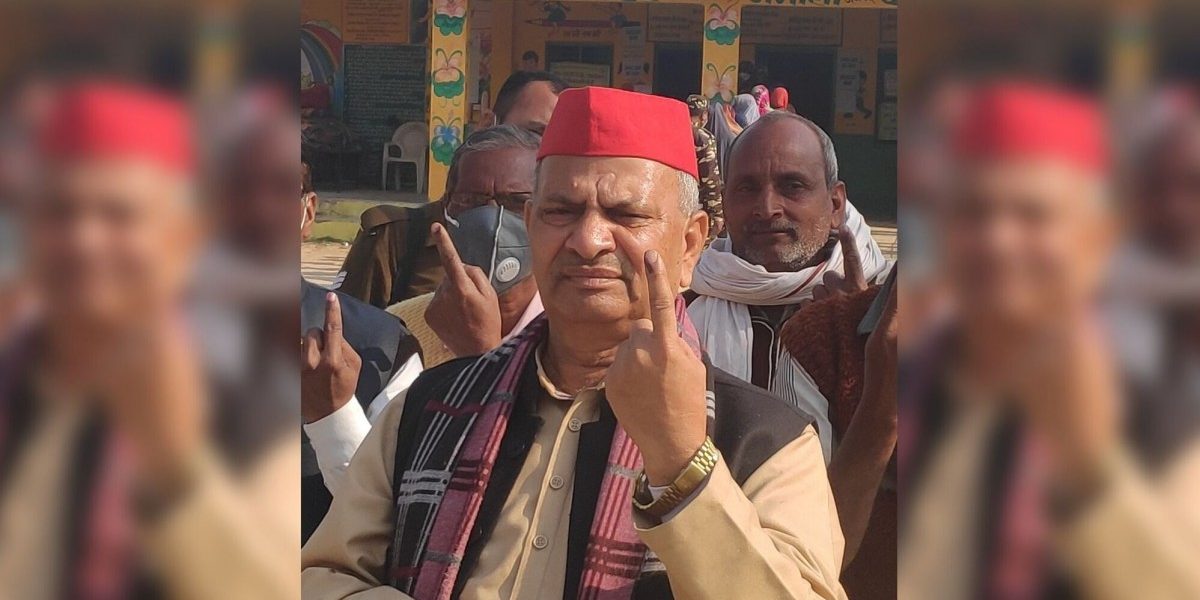 Fake letters in the name of Samajwadi Party UP president Naresh Uttam Patel (pictured) have been circulating, imploring supporters to vote for the BJP instead. Photo: Facebook/ Patel.NareshUttam.SP.

Lucknow: As the high-voltage assembly election in Uttar Pradesh continues, alleged fake letters in the names of opposition parties have started making the rounds on social media.

One such fake letter quotes Samajwadi Party (SP) state president Naresh Uttam Patel as appealing to voters who intend to vote for the SP to vote for Bharatiya Janata Party (BJP) candidates instead.

This fake letter, with reference number 1162/2022 and dated February 27, carries a counterfeit letterhead of the SP and bears the title: ‘Samajwadi Party Press Release’. The letter purports to quote SP state president Patel and asks SP supporters to vote for the BJP in constituencies where SP candidates are weak, in order to defeat the Bahujan Samaj Party (BSP). The letter also carries a fake signature of Patel.

The SP has accused the BJP and the BSP of working together to garner more votes for the ruling party. SP spokesperson Rajendra Chowdhry alleged that the BJP was in connivance with the BSP in circulating the fake letter, calling the issue a “transfer of vote conspiracy”.

Party leaders have brought the letter to the notice of the election commission and the state police and demanded legal action against the social media accounts that posted it.

The letter comes ahead of the sixth and seventh phases of the Uttar Pradesh assembly elections which are scheduled to take place on March 3 and March 7 respectively. 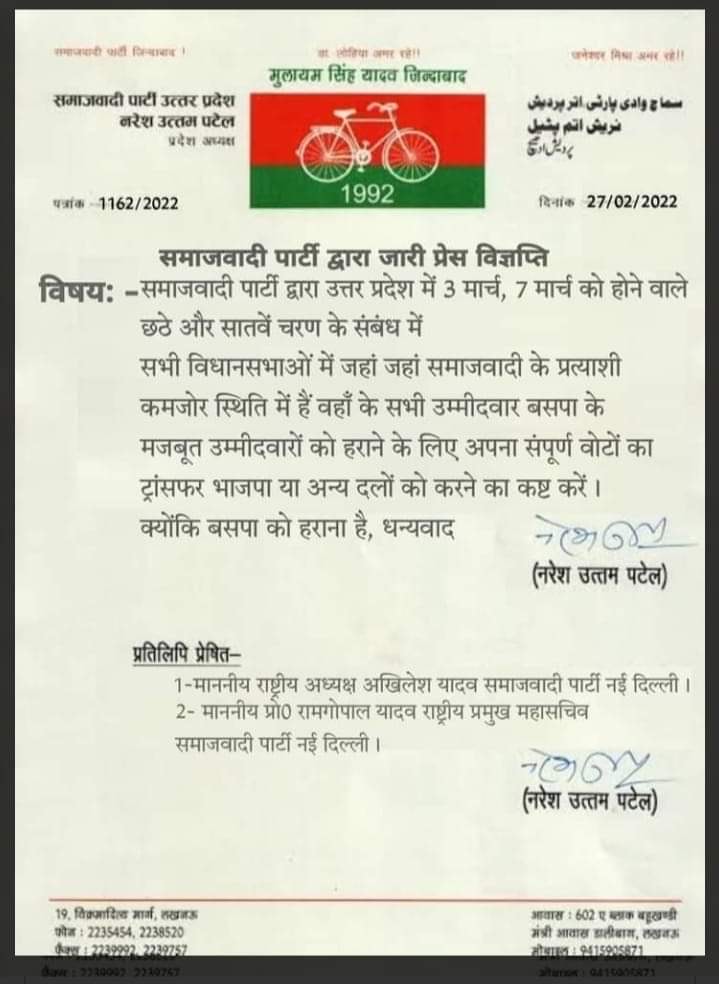 These phases hold particular import for the BJP because Varanasi – Prime Minister Modi’s Lok Sabha constituency – and Gorakhpur Urban – from where incumbent chief minister Yogi Adityanath will contest – will both vote in these phases.

Similar fake letters are reportedly being circulated in the name of the BSP as well. One such letter, carrying a similar title, ‘Bahujan Samaj Party Press Release’, dated February 26, was shared on social media. This letter carried, too, carried a counterfeit seal of the party and the forged signature of BSP national secretary Mewalal Gautam.

This letter quotes Gautam as telling the voters that the BSP is weak in “Vidhan Sabha seat 257, Pratappur in Prayagraj” and that in order to defeat the SP, BSP supporters should transfer their vote to whichever party is strong there “kyunki Samajwadi Party ko harana hai (because the Samajwadi Party needs to be defeated)”

This letter was issued with regards to the fifth phase of the election, which concluded on February 27 but erroneously mentions the date for the same as “January 27, 2022”. 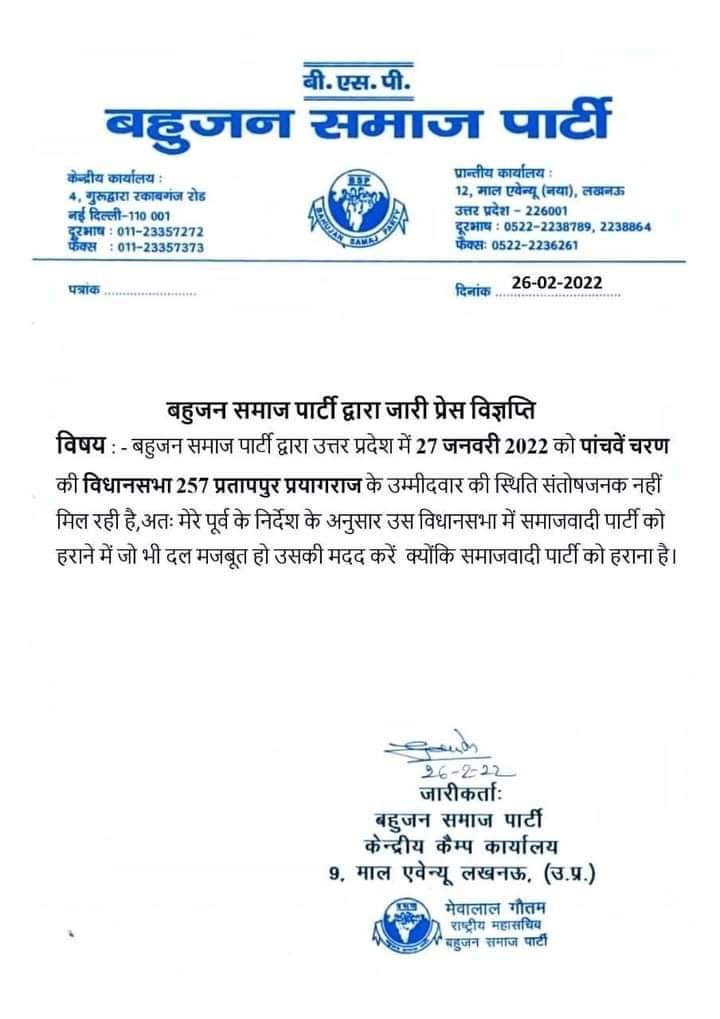 Another similar fake letter was circulated in the name of Santosh Kumar Mishra, the BSP candidate from Vidhan Sabha seat 371, Jafrabad in the Jaunpur district.

This led the BSP to release an official statement saying that no such appeals had been issued by the party. The statement, titled, ‘Be Wary of the Conspiracy of False Appeals Made on a Forged BSP Letterhead’, Gautam categorically refutes claims circulating on social media regarding the Jafrabad constituency and notes that Mishra BSP  is a strong candidate. It further implores supporters not to believe the forged letter. 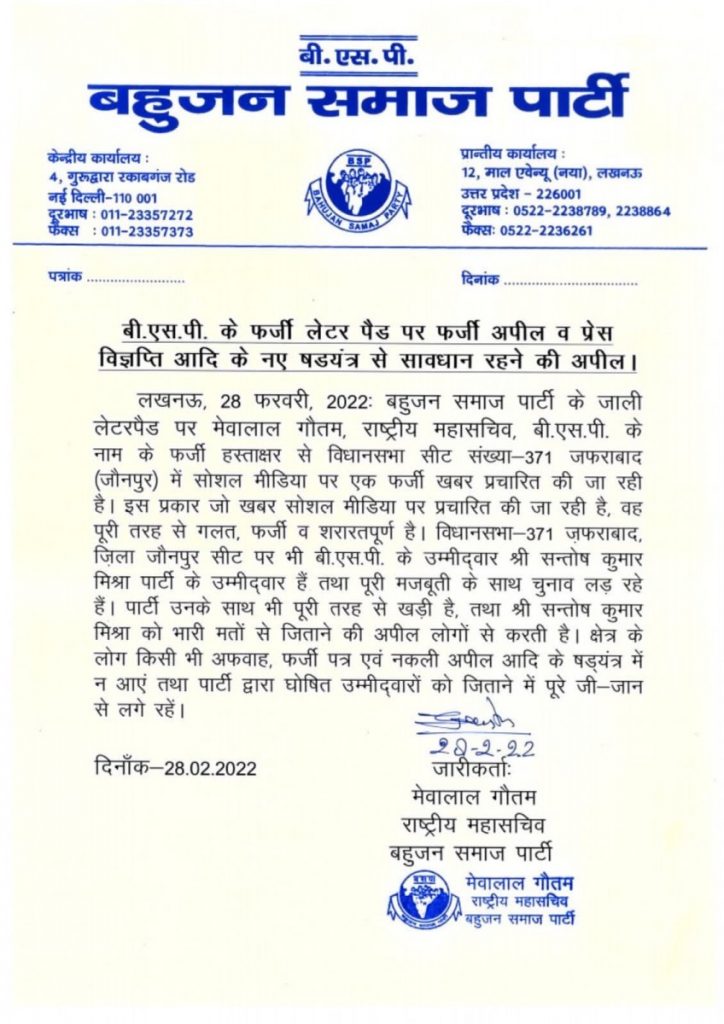 Over the phone, Gautam told The Wire, “Many such fake letters with counterfeit seals and signatures have been circulating on social media. The party is standing firmly in support of its Jafrabad candidate, Mishra,” he added.

However, the BSP did not blame anyone for circulating fake letters. Gautam told The Wire that no complaint has been registered against anyone since the party has no clue about the origin of the letter.

Also read: UP: In Sirathu, Deputy Chief Minister Keshav Prasad Maurya Is on a Sticky Wicket

“If the ECI shows any laxity in taking action, it would dent its credibility,” he added.

Many believe that the saffron party might be behind this letter conspiracy. Senior journalist and political commentator Sharat Pardhan said, “Evidently, the BJP is behind these letters as the gist of both letters is to vote for the BJP.”

“I am surprised that, despite a serious conspiracy, the BSP neither moved the ECI nor to the state administration,” said Pradhan. “It seems that the party is dancing on the tune of the BJP. Party supremo Mayawati is under pressure as probes are pending against her in many cases.”

Singh also added that SP chief Akhilesh Yadav had forged strong alliances in Eastern Uttar Pradesh and that to dent these alliances, the saffron camp is engaging in such “frivolous activities”.

But, according to Singh, voters know everything and moreover, it is the duty of the ECI to swiftly investigate the matter and book the accused who circulated these letters on social media.