While all the parties promised to provide jobs and better education opportunities, their core ideologies were also reflected in the manifestos. Lucknow: The manifesto of the ruling Bharatiya Janata Party (BJP) reflects the communal issues it has been raking up over the last few years. Its primary contender, Samajwadi Party, however, has stated that it would follow a “zero-tolerance” approach towards hate crimes against Dalits, minorities and women.

Both the BJP and SP released their manifestos on Tuesday, February 8, two days ahead of voting in the first phase of elections. On February 10, 58 of the state’s 403 assembly seats, spread across 11 districts, will go to the polls. Uttar Pradesh will vote in seven phases between February 10 and March 7.

Raising the “love jihad” bogey, the BJP promised to impose a 10 year jail term and impose a fine of Rs 1 lakh in ‘love jihad’ cases. The manifesto does not define the crime but the phrase is used by Hindutva groups to describe a marriage between a Muslim boy and Hindu girl  where the latter adopts Islam.

Also read: BJP Is Playing the Communal Card Again in UP by Stoking Fear and Prejudice

On the other hand, the SP manifesto promises that a monitoring unit will be set up to track and crack down on hate crimes against women, Dalits and minorities.

All the manifestos also promise to provide minimum support price (MSP) for crops, apart from free power to famers, reduced power tariffs for residential units and jobs to unemployed youth.

In particular, high power tariff in urban and rural areas has been a recurring theme during electioneering. Towards this effect, the SP has promised 300 units of free electricity to domestic consumers, and free electricity for irrigation purposes. The BJP too has promised free power supply to farmers. However, the Congress has promised to slash electricity bills by half, besides waiving off pending bills for the period of the COVID-19 pandemic.

To woo women voters, the SP has promised 33% reservation for women in all government jobs and free education for girls up to post-graduation level. The BJP, on the other hand, has promised scooters to meritorious female students. However, the party has not spelt out any criteria for how these ‘meritorious students’ will be selected. 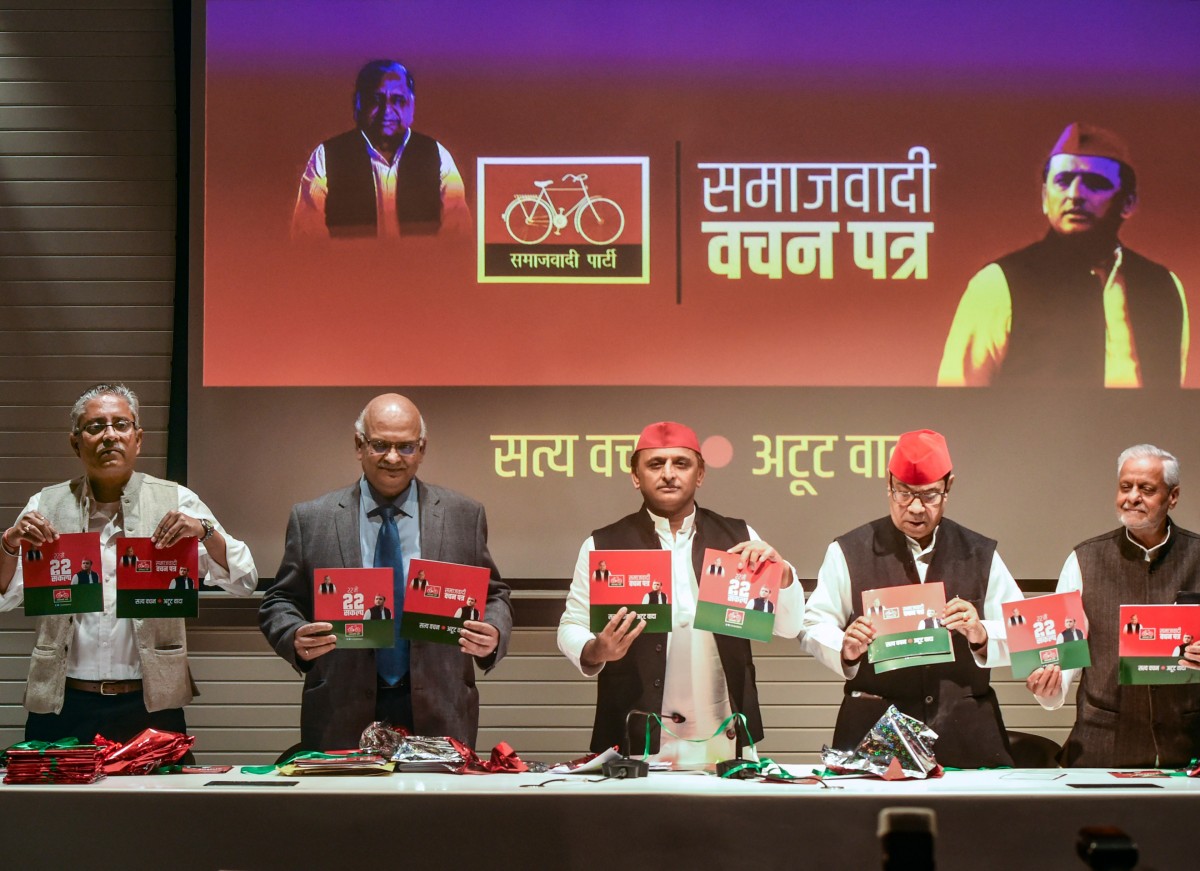 The Congress party, for its part, has promised free education to students of SC and ST communities from primary (KG) to PG level. Additionally, it has also vowed to give scooters and smartphones to girls who finish high school and intermediate education. Similarly, the SP has announced laptops for students who successfully complete their intermediate education.

Given the year-long, successful farmers’ protest, agriculture has also figured prominently in the manifestos. In its ‘Vachan Patra‘, the SP has pledged to make farmers in the state debt-free in the next three years. On the other hand, the BJP, in its ‘Lok Kalyan Sankalp Patra’ has promised to provide interest if payments to sugarcane farmers are delayed by more than 14 days.

The Congress party has announced that it will waive off farmers’ loans within 10 days of forming the government. Called ‘Unnati Vidhan‘, the party’s manifesto has assured a compensation of Rs 3,000 per acre to farmers whose crops are damaged by stray animals.

On the issue of farm produce, the SP has pledged that all produce will be bought at MSP, and small farmers (those who own less than two acres of land) would be given two sacks of diammonium phosphate fertiliser (DPF) and five sacks of urea. The Congress party has announced a rate of Rs 2,500 per quintal to procure wheat and paddy, and Rs 400 per quintal for sugarcane. The BJP, which has been facing public ire over the rise in cooking gas prices, has once again added the Ujjwala Scheme to its manifesto and announced two free LPG cylinders in the festive season – one each on Holi and Diwali.

The SP too has announced two free LPG cylinders every year to the families that fall below the poverty line. The party has also pledged to give three litres of petrol and six kilogrammes of CNG per month to autorickshaw drivers.

In a bid to woo farmers, the SP promises to construct a “farmers’ memorial” in memory of those who lost their lives during the farmers’ protest.

The ruling BJP has also promised one job for each family in the next five years. The SP has vowed to enact the Urban Employment Act to review and revive information technology in the state to create employment opportunities for 22 lakh people in the state. Meanwhile, the Congress has guaranteed 20 lakh jobs.

The saffron party’s manifesto has also promised to set up government medical colleges in every district besides appointing 6,000 new doctors and 10,000 paramedical staff. However, no deadline has been announced for these appointments.

Akhilesh Yadav, for his part, has announced the setting up of a “State Pandemic Relief Agency” to deal with the COVID-19 crisis. He has also said that the SP would enhance the health budget by three times the present budget and fix the charges for medical tests.

The Congress has promised financial assistance up to Rs 10 lakh for the treatment of any ailment.

Meanwhile, it may be recalled that the Aam Aadmi Party (AAP), which released its manifesto on January 27, pledged 10 lakh jobs every year and 300 units of free electricity. Party leader and Rajya Sabha MP Sanjay Singh announced that the party would waive off the loans for farmers and called the party’s manifesto “Guarantee Patra”. If voted to power, AAP has said that it would earmark 25% of the state’s budget for education.