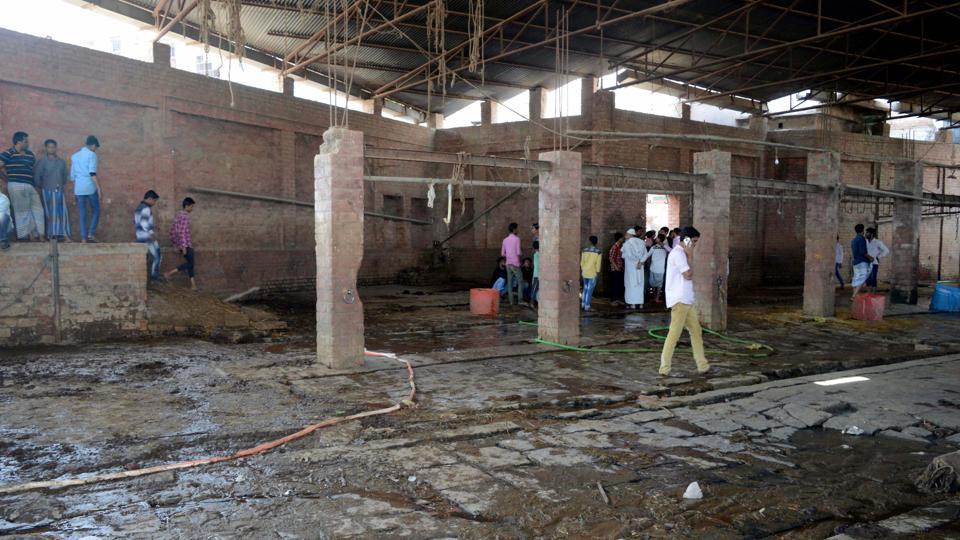 A slaughterhouse in Choka Ghat area of Varanasi that was sealed by the BJP government. Credit: PTI

This is the second in a two-part series. Read the first part here.

We assumed they would confine themselves to cows and their slaughter. However, within 48 hours of the new BJP government assuming power in Uttar Pradesh, they began a crackdown on buffalo beef, executing with immediate effect their election manifesto promise of “shutting down illegal slaughter houses, and all mechanized slaughter houses”. Media reports from March 22, 2017 onwards, the day after the first two ‘illegal’ slaughterhouses were shut down, vary widely in their figures on the total number of slaughterhouses in UP (126-140), the number of ‘illegal slaughter houses’ (40-125), the number of slaughter houses recently shut down (20-40), the number of illegal meat shops shut down (upwards of 50,000) and so on. There has, however, been piecemeal and muddled media reporting regarding the issues of legality of slaughterhouses. We have to locate and understand ‘legality’ within two distinct marketing chains: the marketing chains for domestic beef production and those for international beef export.

As far as the beef export market chains go, animals from livestock markets or from traders are sold to an export-oriented processor that handles slaughter, processing, export marketing and logistics. These processing firms are also responsible for ensuring compliance with central and state government regulations. India’s export-oriented slaughter and processing facilities are relatively modern and large-scale, privately-run enterprises. Along with necessary licenses of municipal corporations, it is only export-oriented slaughterhouse processors which have to be registered with the APEDA (Agricultural and Processed Food Products Export Development Authority), the Government of India Export Inspection Council and under the Food Safety and Standards Authority of India. APEDA and its associated agencies set the export slaughter and processing facilities standards, inspect the process plants and products, renew annual registrations after inspection, enhance packaging and marketing processes, and build capacities of the export units. All export-oriented units must be certified under HACCP and ISO 9000, and be bio-secure.

The UP authorities are citing a National Green Tribunal (NGT) ruling of May 12, 2015, for the closure of slaughterhouses and meat shops. This particular NGT ruling is not available on the NGT or UPPCB’s websites. An NGT ruling of December 2015, (original application No 173/2015) refers to the closure of only four slaughterhouse units in different parts of UP. The UPPCB in 2015, identified 129 industrial units (including 44 slaughterhouses) deemed very hazardous for the environment. However, the BJP government chose to only go after slaughterhouses, leaving the textile and yarn units, aluminium smelter units, metal surface treatment units and pulp and paper units to continue to pollute unchecked.

The UP government’s drive is really about a shutdown of government slaughterhouses, the only beef source for domestic consumption, affecting the entire market chain comprising workers, meat sellers and consumers. In the name of ‘illegality’, their actions are clearly communal, directed to economically cripple the Muslim community, many of whom depend on the sector for their livelihood, as also force a closure of domestic beef consumption, because it does not fit in with the Sangh parivar‘s vision of ‘swacch Bharat’.

Of total Indian buffalo beef exports, 67% originates from UP. Despite this export activity, UP’s buffalo populations increased by 29% between 2007 and 2012, and female buffaloes increased by 40%. In 2015, of the total buffalo beef produced in the country, nearly 47% was domestically consumed and the remaining 53% exported. A clampdown on buffalo beef production in UP, as is currently underway, will severely impact the market chains for buffalo-rearing farmers, who will no longer have an avenue to sell their dry/culled dairy females to traders, workers, meat sellers or domestic consumers, whose cultural rights to food are under grievous threat. In the financial year 2015-16, carabeef was India’s highest earning agri-export commodity (Rs 26685.41 crore). While most export units in UP seem to have been spared closure, the BJP government’s manifesto to shut down “all mechanized slaughterhouses”, if carried through, will directly impact the entire spectrum of export units, leading to a complete collapse of India’s buffalo beef exports, dairy markets and livelihoods of marginal and small farmers.

It’s time for India’s small and marginal farmers to organise and voice their protests against this complete destruction of their agriculture livelihoods happening in the name of saving India’s ‘holy cow’ and Hindu culture. Before long, they will find all cattle becoming the monopoly of gaushalaas, who will be laughing all the way to the banks with their ‘Made in India’ fast-moving consumer goods products of cow urine and cow dung, retailed back to farmers and other gullible citizen consumers.