After counting was disrupted on Saturday due to clashes and allegations of violence, the results were announced on Sunday, with the 'United Left' panel sweeping the elections ahead of ABVP, NSUI and BAPSA. 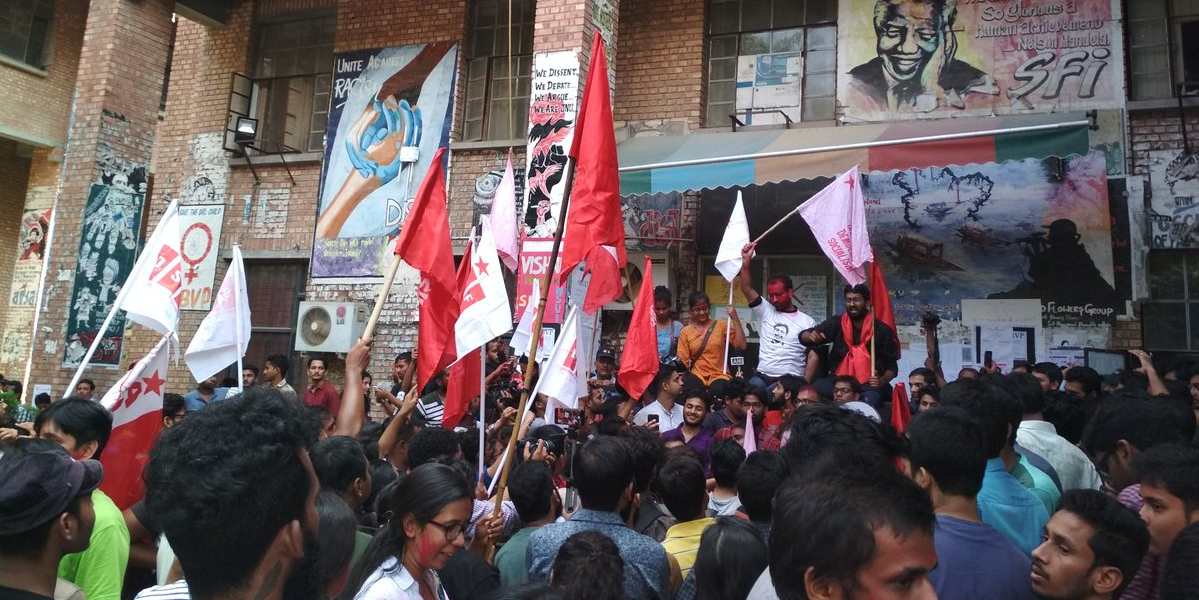 New Delhi: The Left alliance defeated its nearest rival, the Rashtriya Swayamsevak Sangh-backed Akhil Bharatiya Vidyarthi Parishad (ABVP), comprehensively in the Jawaharlal Nehru University Students’ Union (JNUSU) elections, the results of which were declared on Sunday. In an exceptional victory, the alliance – comprising the All India Students Association (AISA), the Students’ Federation of India (SFI), the All India Students Federation (AISF) and the Democratic Students Federation (DSF) – won more than three-fourth of all the seats, including the four top posts of president, vice-president (VP), general secretary (GS), and joint secretary (JS).

While N. Sai Balaji, the Left alliance’s presidential candidate polled 2,161 votes, ABVP’s Lalit Pandey, who finished second, received only 982 votes. In the other top three positions too, the Left defeated the ABVP by big margins. Sarika Choudhary won the VP’s position by a margin of 1,680 votes. Aejaj Ahmed won the GS’s post by 1,300 votes while Amutha won the JS position by 800 votes. Given a total of 5,170 students voted (67.8%), ABVP, which claimed until recently that it would sweep the JNUSU polls this year, struggled to cross the 1000 vote mark. 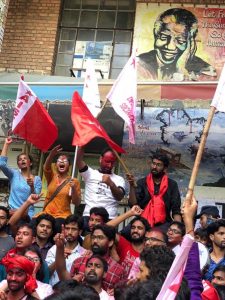 The Left alliance saw the victory as vindication of a series of agitations it led against what it called “high-handed and authoritarian” administrative decisions taken by the vice chancellor Mamidala Jagadesh Kumar over the last one year. The Left parties have been protesting against seat-cuts, irregular implementation of reservation policy, violation of procedures in faculty appointments, compulsory attendance of research students and the VC’s sudden decision to open engineering and management schools in the campus, for which he has also requested the government’s Higher Education Financing Agency (HEFA) a loan of Rs 515 crore. The parties feel that the loan, if granted, will push the university into a cycle of debt and may prompt the administration to increase the tuition fees.

The JNUSU elections, which have a history of being conducted amidst high-pitched political debates and discussions, concluded this year amidst rare acts of violence and disruption. Soon after polling finished on September 14, the vote counting process was violently interrupted by the leaders of ABVP for more than 15 hours. The ABVP cadre broke into the School of International Studies (SIS), where votes were being counted and laid siege to the centre on September 15, thereby stalling the process. They were also accused of damaging property, beating up security guards and injuring one senior election commission (EC) member and several students.

Students claimed that the ABVP resorted to violence when it failed to send a counting agent for its candidates despite several calls by the EC. After having missed the last call by the EC, the ABVP demanded that its counting agent should still be allowed into the counting centre. According to convention, for the sake of transparency, EC invites counting agents from all parties to oversee the counting process for each of their candidates. However, if a party fails to send one after the last call, the ballot is opened in the presence of other agents and counting begins. Once the ballot boxes are opened, the EC does not allow anyone to enter the premises of the counting centre.

Just like ABVP, the AISA also failed to send one of its agents for the post of councillor in one of the schools. But it accepted the EC’s convention and let the counting proceed. However, the ABVP insisted that its agent be allowed to enter, which led to speculation among other parties that it could well be planning a sabotage of the polls.

As tensions soared during counting and rumours of stray violence in and around the campus did the rounds, the one-way violent disruption by ABVP was met with extraordinary restraint by all other parties in the fray. This prevented the already-tense environment from escalating into a riot-like situation. Ultimately, the EC made an exception and let an ABVP counting agent in and conducted the counting in the presence of a observer from the faculty.

JNU’s unique EC is entirely a student’s body which has been successfully conducting peaceful elections since its inception. Every party has always respected its decisions. In instances, where a party disagrees with the EC’s decision, the matter has always been sorted out peacefully in discussions. The ABVP too has always been a part of such dialogues.

That it decided to challenge the EC’s authority violently this time marks a significant exception in the JNUSU polls. The saffron student organisation’s violent tactics also come on the heels of its involvement in multiple such fights in the recently-concluded Delhi University student’s polls. The ABVP won majority of posts in the controversial DUSU elections, in which the opposition demanded fresh polls over alleged instances of EVM malfunctioning.

For the Left alliance, the win in JNUSU polls will come as a boost to carry on their movements against recent decisions taken by the Union government that it thinks is a continuation of “anti-student policies”. It will also gain confidence from the fact that the alliance significantly improved its votes in JNU’s science schools, where ABVP has traditionally been dominant.

A case in point would be its sweep in the school of life sciences. The school was in the middle of a controversy earlier this year when a few women students accused a professor of sexually harassing them. The accused faculty member was said to have close links to the administration and the Sangh parivar. While the Left launched a political attack on the administration on the issue, the ABVP, which had strong support in the school, remained conspicuously silent.

The newly-elected president, N. Sai Balaji, thus, touted the victory as a win for “the collective strength of 8,000 students”.

ABVP, despite its poor showing, will also find its silver lining from the fact that it emerged as the Left’s primary contender in one of the biggest schools of JNU, the School of Social Sciences (SSS). SSS is considered the most formidable bastion for the Left and other progressive thought-driven parties like the Birsa Ambedkar Phule Students Association (BAPSA).

Most schools witnessed almost a direct clash between the Left and the ABVP, in the process, shrinking the space for intersectional social justice discourses further. Many students felt that the poor showing of identity-driven social justice parties like the BAPSA is a reflection of this trend. The Left’s strong resistance to violation of procedures during recent faculty appointments – which it claimed was done to solely accommodate those who were close to the Sangh parivar – has possibly made the two forces the most credible and visible choices, many in the university say.

By setting a violent precedent in the campus, the ABVP is likely to assert itself further through the next academic year. With an inimical administration already posing as a challenge, the Left alliance, despite getting a historic mandate, may have to brace itself for tougher struggles as it assumes leadership in the JNUSU once again.