Unfortunately for Modi and Shah, the Congress Simply Does Not Go Away

But to mount a credible opposition, the Congress Working Committee must resolve to hold internal elections for the party's leadership based on a contest between policy planks. 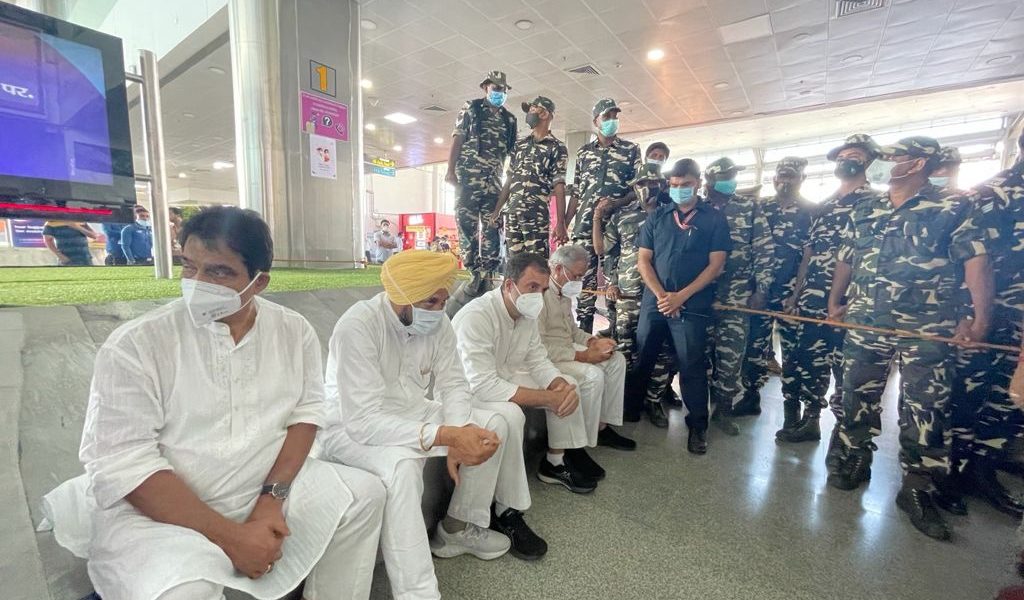 To the annoyance of the bulldozing ruling party, the Indian National Congress does not go away.

Increasingly, commentators never friendly to the Congress but now rather wary of the real possibility of a formal constitutional make-over to authoritarian  rule,  can be heard to say how the republic needs the Congress.

The averment includes the acknowledgement that the   grand old party remains the only challenge to the Bharatiya Janata Party in some 200 parliamentary seats, and thus the only real national alternative to the BJP.

This reality is accepted by other opposition parties as well, including the Trinamool  Congress.

That the Congress did poll 12 crore popular votes to the BJP’s 18 crores in the General Elections of 2019 is noted.

That the BJP has also always known this has been apparent from the ways in which it has, through the last seven years, sought to diminish Rahul Gandhi through a strategy of unrelenting ridicule. BJP leaders project the Congress leader as a figure of no real political consequence.

This now gets harder to do.

For one, poll after poll, Rahul continues to emerge as second to Modi in popular choice, regardless of the  gap between the two.

Recent polls show this gap to be narrowing sharply.

Also apparent from events over the past year or so is the fact that Rahul has succeeded to a great extent in honing the party worker into a fighting unit. Suddenly, the Congress seems everywhere on the street, feistily raising issues relevant to the masses. The party’s spokespersons on media channels show both confidence and substance.

And Priyanka’s stint as general secretary incharge of the East has blossomed into a formidable grass roots contention.

All that regardless of how many seats the party may garner in the coming assembly elections in Uttar Pradesh.

Ups,  downs and sundry articulations over recent months tend to suggest that what has seemed a pointless stasis in the thinking echelons of the party has not been a case merely of  confusion or ineptness.

Contested ideological issues, it now seems, have been at work.

This has not been just a case of the ‘old guard’ vs ‘new guard’ power struggle but one that has been  rooted in the party’s   equation with the social and economic  realities  of the day, and in larger considerations of the party’s identity.

Where Sonia Gandhi had sought to egg the then Manmohan Singh government to  welfarist purposes and policies,  Rahul and Priyanka clearly desire a more pronounced leftward shift in the party’s commitments and affections.

That much of the resistance to their doings has been coming from the usual suspects in the economic power-structure becomes increasingly clear.

Yet, if Rahul has from the first never let up in his clear-headed ideological attack on Hindutva propped by crony capitalists, Priyanka’s articulations and actions have equally been directed at both comprehending and marshalling grass-roots discontent with the policies of the Modi government.

Her grasp of the nitty gritty details of the objective despair these policies have unleashed along many axes of everyday livelihood concerns continues to focus and bolster the  mind of the party worker in a direction she is able to both  foreground  and press to political advantage.

That Priyanka possesses the realpolitik savvy of her grandmother is for all to see; and none of the strategies she has been forging seem merely passing gestures but considered, long-term paths forward.

As the Modi government’s – and the ruling party’s –  pronouncements increasingly fail to move the people, Rahul and Priyanka gain in being seen as earnest and sincere, willing to marry claim to action.

It is not the historic farmer’s movement alone that has debilitated the ruling BJP’s hold in the state of states; people unconnected to the movement can be heard and seen to be equally distraught with the crushing  weight of  economic despair.

Soaring prices, disappearing incomes, stone-walling  administrations, disingenuous political  propaganda—all have combined to tarnish hopes that the innocent once posited in a government headed by a ‘Hindu Hriday Samrat’.

The vast masses of Hindu citizens can see that they have benefited as little as non Hindus. The BJP’s ‘cultural nationalism’ has reached its limit of popular appeal.

Such  realisation  renders  communalism a politics of diminishing returns, nowhere more eloquently seen than in the coalescing of the Jats, Gujjars, and Muslims in western Uttar Pradesh.

That said, what spectrum of vote share the Uttar Pradesh elections may yield must still remain anybody’s guess. What seems certain, however, is that the ruling BJP is in no position to carry the next general election all by itself, or even with the allies it still has.

That will confront opposition parties with a real Hobson’s  choice:  will they look to their own turfs, or will they rise to this watershed moment in history and give primacy to removing the BJP  from power.

Sadly, cupidity may still get the better of enlightened political reason.

That both Akhilesh of the Samajwadi Party and the Congress duo have laid claim to India’s composite culture (as of now, Akhilesh more than the Congress) and people-oriented economics is in any case a departure from the suffocatingly demure pussy-footing of recent years.

It is to be hoped that the coming session of the Congress Working Committee will make bold to announce a schedule for electing a new Congress president.

And, as among the Republicans or Democrats in the United States of America, or the Conservatives or Labour parties in the United  Kingdom, Congress aspirants other than the Gandhis will make bold to contest on policy planks they espouse.

This would both reestablish the democratic convictions and traditions of the grand old party, and lend unquestionable credibility to whoever is elected  leader.

It would also set an example to other parties who may be as  “dynastic” as the Congress, but who nonetheless do not follow inner-party democracy.