Understanding the Caste Politics Behind the Jat Agitation

As the quota violence wears down and the government ponders over the detailing of its proposed new legislation to give Jats reservation, one wonders what steps will be taken, if any, to bridge the ugly caste divide brewing in Haryana. 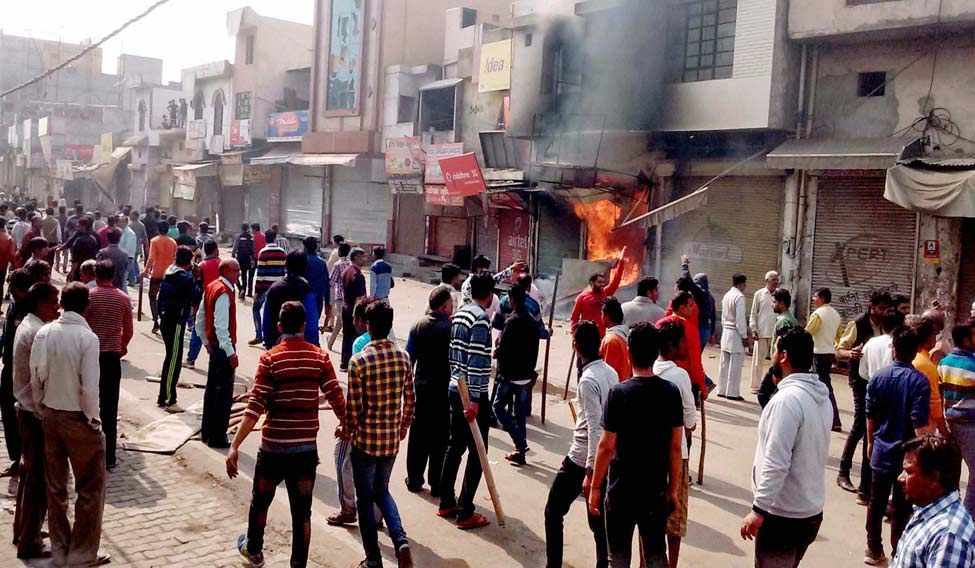 Chandigarh: The political and social might of the Jat community in Haryana is evident in the manner in which they brought the state and adjoining areas to a halt, creating mayhem, blackmailing and defying the government with impunity, in their quest for reservation in government jobs and educational institutions under the other backward class (OBC) category.

Haryana’s political leadership has scurried for cover and even the Jat leaders of the ruling BJP are unable to exert any influence over the khaps who are leading the agitation. The family of state Finance Minister Captain Abhimanyu Singh, Chief Minister Manohar Lal Khattar’s second-in-command, was airlifted to safety from a burning Rohtak town, without any consideration for the property and belongings of hundreds of hapless people left to face anger of marauding mobs on their own.

Indeed, the message from the Jat community is that in Haryana, where they have always called the shots, they will not be trifled with, with the rampage and destruction proof of what they are capable of if made to play second fiddle to other communities.

The seeds for the present confrontation were sown when the BJP government led by Khattar, a Punjabi, took charge in the state. The party’s decision to install a non Jat as the chief minister rankled the community, including those from the party who assumed they had a natural claim to the post. But it also allowed for attempts by Khattar and his supporters within the government and party to to restore the balance in favour of non Jats, who were largely instrumental in bringing the BJP to power for the first time on its own strength in the state.

Recent comments by Raj Kumar Saini, the BJP MP from Kurukshetra, against Jats demanding reservation was an articulation of the fears of his own community and others, such as the Ahirs, Gujjars and Lodhas, who currently enjoy a 27% reservation in government jobs and educational institutions, and are unwilling to share their quota with the numerically and politically powerful Jats. There is therefore more to the quota mayhem in Haryana than merely reservations.

The current agitation is nothing but the attempt of a spoilt child to regain the pampering and cosseting received by the previous Congress and Indian National Lok Dal regimes, to re-assert its waning clout in the new dispensation. Former chief ministers Bhupinder Singh Hooda and Om Prakash Singh Chautala are Jats, and unabashedly protected and indulged the community.

A rattled BJP government has shamefully capitulated before the anger of the Jats, rushing to placate them with OBC status, and will introduce a bill in the coming assembly session. How it proposes to beat the court diktats that have struck down similar attempts to give Haryana’s Jats quota benefit is the real question. In 2013, the Congress government gave the community 10% reservation under the special backward caste category, taking the total reservation pie to 57%. The government then introduced an additional 10% quota for economically backward persons of the general castes, which increased reservation in the state to 67%! Many in the government conceded in private that these decisions were made with the full knowledge that they will be struck down by the courts but political opportunism played its hand. In 2014, just before the Lok Sabha polls, the UPA government had included Jats in the centre’s OBC list after overruling objections from the National Commission for Backward Classes, but this was struck down by the Supreme Court in 2015.

In this sordid game of political one-upmanship that has left 16 people dead and destroyed property worth 20,000 crore rupees in the last few days, two disturbing trends can be discerned. The first is a deep schism between the Jat and non Jat communities, with clashes breaking out between the two at several places. A new suspicion has arisen among the Yadavs, Sainis, Lodhas and Dalits in the state: they resent the prospect of the Jats eating into their quota pie, but also feel that the current agitation is an attempt by the Jats to install their own chief minister. The government should also be concerned by the deliberate inaction at several places by Jat policemen who were sympathetic to arsonists targeting the properties of non Jats.

Although the violence has quelled a bit, there was no check on the caste-fuelled assertion and its violent manifestation over the past few days. Burning railway and police stations, and digging up roads and felling trees to block them are the favourite weapons of the Haryana Jats, who have used these measures in previous reservation stirs too. Only this time around the speed and scale of the operation took the government by surprise and has exposed Khattar’s miserable hold on his government.

The issue has hit Khattar’s cabinet too. On Monday, during a cabinet meeting, state Health and Sports Minister Anil Vij threatened to resign if the state government gave 10 lakh rupees compensation those killed in the violence since many of those killed may have been involved in rioting. If the already tottering Khattar, rushing to placate the angry Jats, ‘goes soft’ on the cases against the arsonists as is being anticipated, where does that leave the bruised and battered non Jats who voted for the BJP and ended up with their shops, homes and establishments destroyed? The inevitable feeling of betrayal and alienation will need handling by a firm and skilful leadership, no evidence of which is available at present.

The BJP’s bold experiment of having a non Jat chief minister has gone horribly wrong by picking the relatively-inexperienced Khattar who failed to grasp the nuances of emerging caste tensions and quell it in the bud. The last non Jat chief minister was the wily Bhajan Lal of the Congress who understood the Jat psyche and humoured them, even as the non Jats flourished in his rule. The two Jat ministers in Khattar’s cabinet, Capt Abhimanyu and Om Prakash Dhankar, do not have a mass base in the Jat belt, where leaders like Hooda hold sway.

As the quota violence wears down and the government ponders over the detailing of its proposed new legislation to give Jats reservation, one wonders what steps will be taken, if any, to bridge the ugly caste divide.

Chander Suta Dogra is a journalist who has covered north India for two decades. She has travelled extensively in the heartlands of Haryana, Punjab, Himachal Pradesh and Jammu & Kashmir for investigative reporting on issues ranging from caste to women.