All that the UGC’s mindless action has done is betray its intellectual bankruptcy in playing up to the fake nationalism that is sought to be generated through repeated invocations of the so-called surgical strikes, which seem to always be brought up when elections approach.

The University Grants Commission has decreed that all universities celebrate September 29 as Surgical Strikes Day through marches by NCC contingents, pledges, lectures by ex-servicemen and so on.

It is no mystery as to why the UGC is suddenly discovering the patriotic virtues of celebrating “Surgical Strikes Day”. The so-called surgical strikes have been used as political fodder from the outset.

It has been pointed out repeatedly that such strikes had been conducted across the Line of Control since the mid-1990s. But the Narendra Modi government decided to broadcast what was essentially a shallow raid and make it out to be some kind of a major military victory.

It soon became evident why. Posters hailing the government’s action became a significant feature of the BJP’s campaign for the Uttar Pradesh assembly poll in November 2016.

Now to cap it comes this action by the UGC, which can only be termed farcical, because in following the government’s approach, the UGC ends up doing a disservice to the Indian Army’s achievements and also parades its ignorance to the world.

In India’s post-Independence history, there is no dearth of genuine military accomplishments that deserve to be celebrated.

The so-called surgical strikes were a coordinated shallow raid on some shacks used as launching pads by Pakistani militants and there is no doubt that they required bravery and professional skill to execute. Fortunately, the special forces teams managed to come back without any casualties.

But by no measure can they be compared with the accomplishment, say, of saving Srinagar from Pakistani raiders in October 1947. Neither can there be a comparison between them and their Parachute Regiment forbears who were besieged in Poonch for a year by Pakistani forces. Nor, for that matter, did they result in an achievement like the cleverly planned operation that led to the capture of Zoji La pass in late 1948.

It would be embarrassing to compare the so-called surgical strikes with the 1965 war’s superlative achievement – the capture of the Haji Pir Pass, in what was a far more complicated and hazardous operation. Surely, if the UGC needs to celebrate a military achievement, it could have considered the Battle of Asal Uttar in which Indian forces decimated three Pakistani armoured regiments.

Of course, in terms of the sheer scale, military skill and success, the liberation of Bangladesh and the capture of 90,0000 Pakistan Army personnel was orders and orders of magnitude beyond the outcome of the so-called surgical strikes.

And we have not even come to the Kargil mini-war, for which the predecessor BJP government must take its share of guilt. Because of its negligence, Pakistani forces occupied Indian territory and our boys had to make frontal attacks on Pakistani positions, sacrificing their lives in significant numbers in tactics reminiscent of World War I.

Yet the UGC has nothing to say for all these achievements. Indeed, the reality is that our actual wars do not even form part of the curriculum of our universities. True, you study the causes of these wars, the diplomatic action surrounding them, but not the actual conduct of operations and their consequences. Military history is lamentably absent from India’s higher education curricula.

A little recap of what has happened since the so-called surgical strikes will serve as a useful antidote to this fake nationalist propaganda.

The strikes were carried out in retaliation for the raid by Jaish-e-Muhammad militants on an Indian Army camp in Uri on September 18 leading to the deaths of 19 soldiers. 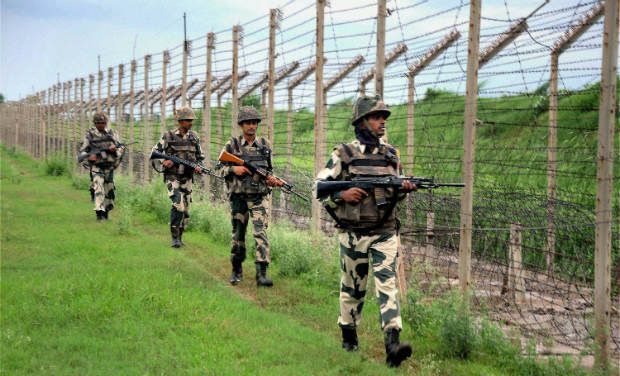 Soldiers patrolling along the Line of Control (LoC). Credit: PTI

The Modi government’s response was the “surgical strikes” of September 29 that struck against launch pads of the militants along the Line of Control. Media reports said that all the Indian personnel had returned safely after killing anywhere up to 50 militants.

Yet, if the so-called surgical strikes were aimed at deterring Pakistan from sending armed militants to attack Indian security forces, they were a failure.

For one thing, Pakistani shelling and attacks along the LoC continued, resulting in a heavy loss of life of civilians and a smaller number of security personnel.

A month after the so-called surgical strikes, on November 29, an Indian army formation was attacked in Nagrota, which is the headquarters of 16 Corps. Seven soldiers including an officer were killed.

This was much more serious than the Uri attack. For one thing, Nagrota is much further inland compared to Uri, which is proximate to the LoC. More important, it is the headquarters of the 16 Corps which looks after the defence of the Jammu, Poonch and Rajouri area. Despite this, and in contrast to the Uri incident, the government did not react.

There was no reaction either, when, on the last day of December 2017, five CRPF jawans were killed in an attack on their camp in South Kashmir by Jaish-e-Muhammad militants.

All that the UGC’s mindless action has done is betray its intellectual bankruptcy in playing up to the fake nationalism that is sought to be generated through repeated invocations of the so-called surgical strikes, which seem to be brought up suspiciously when elections approach.