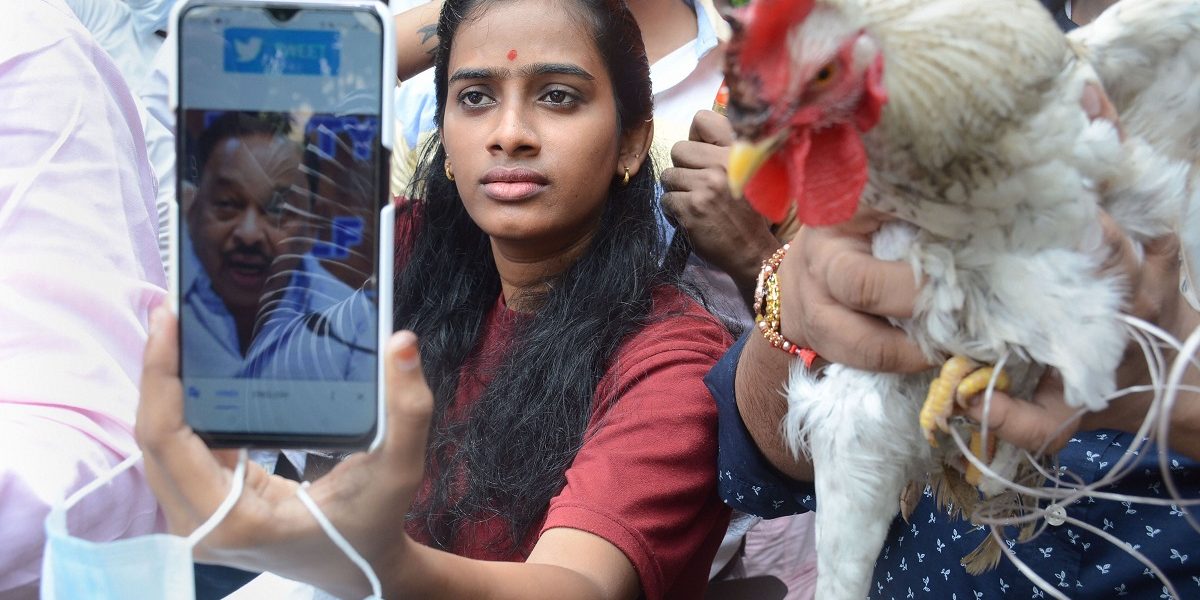 The magistrate’s court denied the police’s request for his custody, but asked Rane to be at the Mahad police station on two days. “Satyamev Jayate (truth always prevails),” Rane tweeted after getting bail and while on his way back to Mumbai.

Rane, who was recently inducted into the Union cabinet, sparked off a controversy after he said he wanted to slap the Maharashtra chief minister for his alleged ignorance of the year of India’s independence.

“It is shameful that the chief minister does not know the year of independence. He leaned back to enquire about the count of years of independence during his speech. Had I been there, I would have given (him) a tight slap,” Rane said during his Jan Ashirwad Yatra in adjoining Raigad district on Monday.

There were reports that the BJP leader complained of high blood pressure and sugar levels and a doctor was called to examine him.

A total of four FIRs have been registered against Rane and the Nashik police commissioner had issued an order for his arrest.

At several places in the state, workers of the Shiv Sena and BJP clashed.

Rane was taken into custody at Golwali, the ancestral village of former RSS chief Sadashivrao Golwalkar ‘Guruji’ in Ratnagiri district. He was then handed over to Raigad police around 2:45 pm in connection with the FIR registered at Mahad.

The case at Mahad was registered under IPC sections 189 (threat of injury to public servant), 504 (intentional insult to provoke breach of public peace), and 505 (statements conducive to public mischief).

At the Mahad court, government pleader Bhushan Salvi sought seven-day police custody for the BJP leader. It was important to investigate if there was a conspiracy to tarnish the reputation of the chief minister, he said.

Opposing the application, Rane’s lawyers Aniket Nikam and Bhau Salunkhe argued that his health condition was serious as he was 69 years old and suffered from sugar and blood pressure issues.

Nikam further argued that the offences under IPC for which Rane was arrested were all punishable with less than seven years and hence his custody was unnecessary.

Nikam also argued that Rane’s arrest was illegal as no summons was issued to him under Section 41A of the Code of Criminal Procedure before his arrest.

The court, after hearing both the sides, denied the police the Union minister’s custody. It instead remanded him in judicial custody and then, on the plea moved by his lawyers, granted Rane bail on a surety of Rs 15,000.

Rane had earlier approached the Bombay high court challenging the FIRs registered against him in different parts of Maharashtra and sought protection from arrest. Rane’s petition, filed through advocate Aniket Nikam, sought the FIRs to be quashed.

The BJP leader also sought an interim order granting him protection from arrest or any coercive action.

The petition was mentioned before a division bench of Justices S.S. Shinde and N.J. Jamadar, seeking an urgent hearing on Tuesday itself. The bench, however, refused to hear it and said mentioning (of the petition) was not allowed and asked the lawyer to follow the procedure.

“File an application before the Registry department seeking urgent hearing and then we will consider,” the court said.

“Everyone has to go through the process. Don’t make us do the job of the registry,” the HC said.

The petition has challenged three FIRs lodged against Rane in Pune, Nashik and Mahad in Raigad.

Nikam said the police had not followed the procedure laid down in law before taking steps to arrest Rane. “Summons under section 41A of the Code of Criminal Procedure has not been issued,” Nikam said.

Under this section, the police, in cases where arrest is not required, can issue summons to the person for questioning.

Earlier in the day, Rane approached a sessions court in Ratnagiri, seeking pre-arrest bail. The court, however, refused to grant any relief noting that the case was registered in Nashik and hence, it did not have the jurisdiction to hear the application. 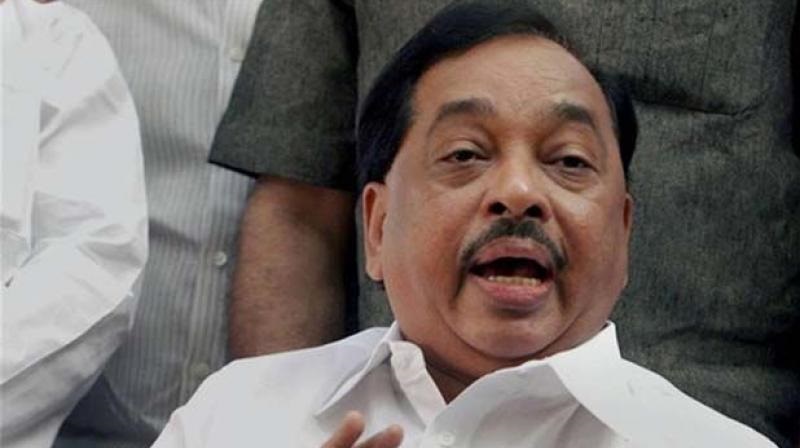 Earlier on Tuesday, Nashik police commissioner Deepak Pandey had issued orders for the immediate arrest of Rane after an FIR was registered against him in the north Maharashtra city over his remarks.

Accordingly, a team of Nashik Police left in the morning for Ratnagiri district, where Rane is currently conducting the ‘Jan Ashirwad Yatra’.

Following his remarks, a complaint was lodged against Rane by Nashik city Shiv Sena unit chief at the cyber police station there.

Based on the complaint, an FIR was registered against Rane in Nashik under IPC sections 500 (defamation), 505(2) (mischief), 153-B (1)(c) (remarks likely to cause disharmony, or feeling of enmity or hatred or ill-will), a police official said.

Considering the law and order situation across the state and in Nashik in the wake of Rane’s remarks, Nashik police commissioner Deepak Pandey ordered an investigation into the matter and the immediate arrest of the Union minister.

The team was asked to arrest Rane and produce him before a court in Nashik, an official said, adding the team was also directed to follow the due procedure for arresting the Union minister.

“We are going by the facts of the case after the registration of an offence against Rane. We are following the rule of law,” Pandey said, adding the arrest was needed to prevent the repetition of such an offence.

The Union minister will be arrested in the case and produced before a court, and further action will be taken according to orders of the court, the police commissioner said.

After Rane’s arrest, vice president M. Venkaiah Naidu would be informed as the Union minister is a member of the Rajya Sabha, the official said.

“While arresting Rane, police will follow all protocols with regard to a Union minister,” he said adding all his privileges as Union minister will be considered.

Whatever he wants to say, he can put forth before the court, the senior police official said, according to news agency PTI.

Stones were pelted from both sides, following which police used cane-charge to disperse the agitators, an official told news agency PTI.

Rane was earlier with the Shiv Sena, during which time he was also the chief minister of Maharashtra for a brief period. He later joined the Congress, before forming his own party in 2017. This party was merged with the BJP in 2019.

On Tuesday, the Shiv Sena workers gathered at the Juhu Tara Road in Santacruz (West) near Rane’s residence. Activists from both parties shouted slogans against each other. Following the clash, the road was blocked.

The clash took place during a protest organised by activists of the Yuva Sena (the Shiv Sena’s youth wing) against Union minister Rane. Meanwhile, saffron party workers gathered outside Rane’s residence in the morning in support of their party leader.

Shiv Sena activists, including women, carried placards and shouted slogans against Rane and had assembled outside an office of the Yuva Sena, located nearby in Juhu.

According to police, Shiv Sena and BJP supporters also clashed at Chiplun in Maharashtra’s Ratnagiri district. Besides, stones were hurled at the BJP’s office in Nashik city, while Shiv Sena workers held agitations in Nagpur.

Meanwhile, in Aurangabad, Shiv Sena’s spokesperson Ambadas Danve lodged a complaint against Rane at Kranti Chowk police station over the latter’s remarks against the CM and party workers thrashed a photo of the Union minister with footwear.

Talking to reporters after lodging the police complaint, Danve said Rane’s remarks were “objectionable”, and demanded action against the BJP leader.

The MLC called Rane a kombdi chor (chicken stealer) – a reference to the poultry shop he ran in Chembur five decades ago during his initial stint with the Sena – and released a couple of hens at the Kranti Chowk square.

The women’s wing of the Shiv Sena will also undertake an agitation in Aurangabad, Danve said.

“Earlier, Shiv Sena supremo Bal Thackeray used to call Narayan Rane as ‘Naru’, which is the name of a disease in Marathi. The Shiv Sena has a remedy for this disease,” he said.

He claimed Rane made the statement to provoke the Shiv Sena.

The Shiv Sena will protest against Rane’s statement through the constitutional process as well as by taking to the streets, the MLC said.

An official at the Kranti Chowk police station in Aurangabad said they have received the Shiv Sena’s complaint and action will be taken as per the instructions of senior officials.