One of the protesters alleged that she paid a bribe to a BJP leader for a job, while another protester alleged that a senior party leader promised her to give a job in the TSR recruitment drive. 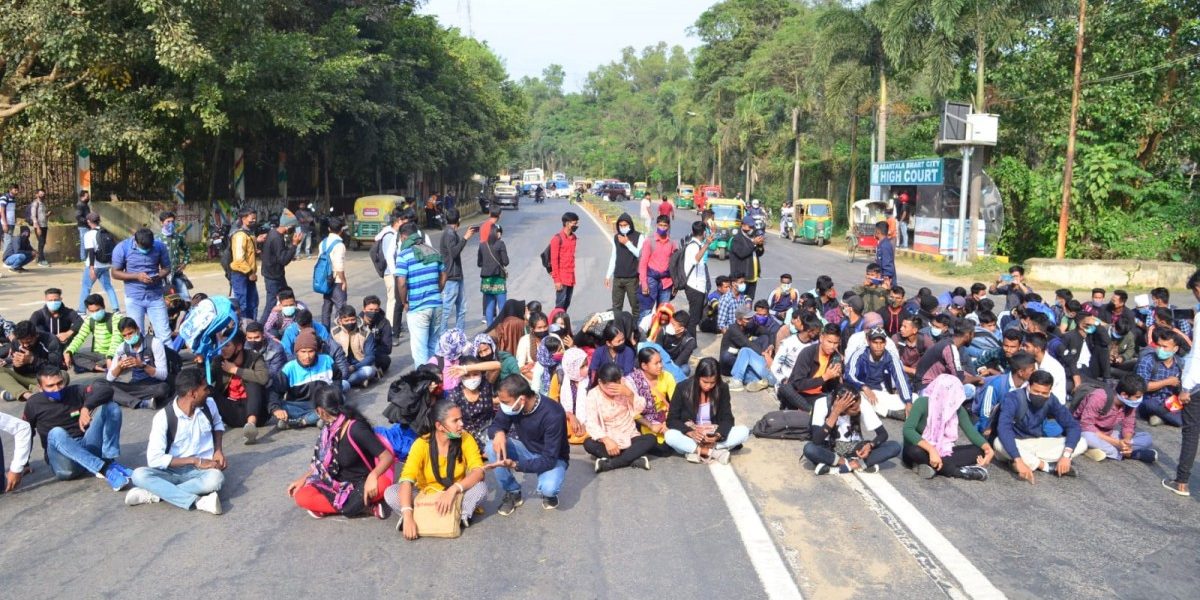 A large number of candidates held widespread protests in Tripura after their names did not appear in the merit list of Tripura State Rifles. Photo: Author provided

Agartala: A large number of candidates whose names did not appear in the merit list for jobs in Tripura State Rifles (TRS), the state-owned paramilitary forces, held widespread protests in various parts of the state, alleging that the local leadership made false promises of recruitment.

The Tripura police department on December 27 published the merit list of 1,443 selected candidates out of a total 2,200. Following the announcement, the protesters attacked Bharatiya Janata Party (BJP) party offices at several places, and in some places, incidents of arson were also reported. Out of the 1,443 selected candidates, 357 belong to other states.

Many protesters claimed to be BJP supporters.

On December 29, the youths who appeared for the job but didn’t get it held a protest in front of the State Secretariat and near the premises of Tripura high court.

They alleged that the local party leadership made false promises of jobs, and the massive protests happened due to an outburst of resentment brewing among the supporters of the saffron party after being deprived of government jobs.

Speaking to reporters on December 30, a senior police official said, “We have detained nearly 75 protesters after they blocked the road in front of the high court. They didn’t have prior permission to protest here. They were later released.” 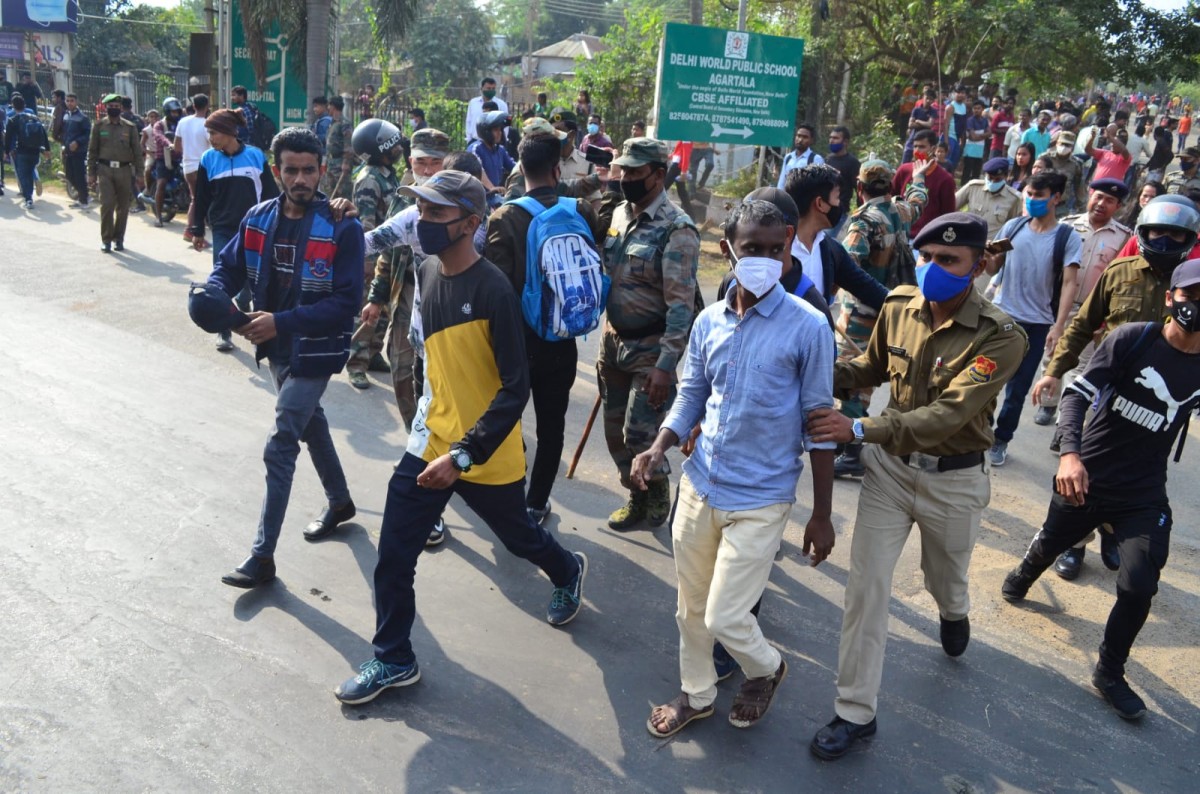 A large number of candidates held widespread protests in Tripura after their names did not appear in the merit list of Tripura State Rifles. Photo: Author provided

Speaking to reporters, one of the protesters alleged that a senior BJP leader promised her to give a job in the TSR recruitment drive.

“My husband died while working for the party. A BJP senior leader, who is now holding a prestigious post, visited my house and promised that I would get a job when TSR posts would be released,” she said, adding that two persons from her village got the offer even though members from their house already have government jobs.

Another job aspirant from the Belonia sub-division under Tripura South district, whose name also did not appear in the list, said, “This is unacceptable. All those who have been selected for the posts in our area come from families that are identified as hardcore Left supporters. Despite having all the necessary qualifications and clearing all the required tests for the TSR recruitment, we did not get the jobs, while people with low scores in the tests got selected.”

He also alleged that the whole recruitment process was manipulated and people got jobs in lieu of a hefty amount of money.

Sumita Debnath, ‘Pristha Pramukh’, or grassroot party worker, from Charilam’s Brajapur area claimed that she had handed over Rs 3 lakh as a bribe to Debnath in the presence of local BJP leader Gopal Debnath as an assurance for the job in TSR.

“Yesterday the list was published and my son’s name was missing. I tried calling them [the BJP leaders] and they reassured me; they told me that they will raise the issue in the state committee meeting. But as it appears, my son is not getting any job. I am asking them either to fulfill their promise or to repay the money they had received,” she said.

Reacting on the matter, state BJP spokesperson Nabendu Bhattacharya said that his party doesn’t believe in providing jobs in the name of the party or in lieu of money.

“Our government believes in quality. We are strictly against such activities. We will look into the [bribery] allegations. Those who are alleging that they have given money to get a job should knock on the door of the police and our party will also conduct an inquiry on the issue. But the BJP doesn’t support such activities,” he said.

The Communist Party of India (Marxist), or CPI(M) state committee secretary Jitendra Choudhury has demanded a judicial inquiry into the incident by a sitting judge of Tripura high court.

“These incidents are a semblance of whatever has happened over the last 45 months. After BJP came to power, nothing is running in order. Whatever is happening is unconstitutional, unduly and illegal. So this is the outburst of that. The youths are identifying themselves as members of the BJP who worked to bring the party in power and they are very much close to the leaders of the party. This government assured the youth of Tripura that they will provide 50,000 government jobs to them; it is in their vision document,” he said.

He further said: “The youths [or the protesters] were exploited by the BJP. They were exploited as they were unemployed and were being engaged in unruly activities across the state. They are all innocent, we are not blaming them. This is all an outburst. An inquiry should be conducted by a sitting judge of the high court on the matter.”

The Trinamool Congress also shared similar views as the CPI(M).