Tripura: A Team of Prashant Kishor’s I-PAC 'Detained' in Hotel Since Sunday Night

Though the team had obtained negative RT-PCR tests before their arrival, the police have restricted them to their hotel room citing COVID-19 protocols. 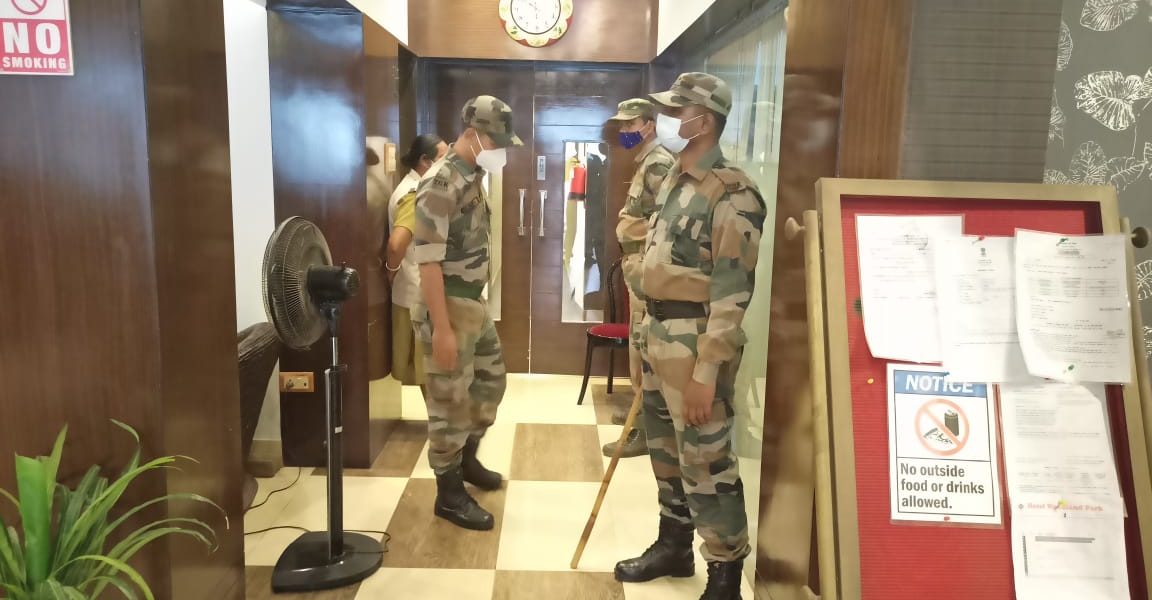 Police officials along with jawans of Tripura State Rifles deployed at the entrance of the hotel where the I-PAC team has been detained. Photo: By arrangement

Agartala: A team of 23 members from Prashant Kishore’s Indian Political Action Committee (I-PAC) who are in Tripura for a survey on assessing the public’s opinion of governance in the state have been detained in their hotel room since late Sunday night, with the police citing COVID-19 protocols to keep them there.

The team arrived in Agartala on July 20 and visited many places across Tripura for the survey, The Wire has learnt. They were staying at a hotel in Agartala.

A team of police officers, along with health officials, visited the hotel on Sunday night and enquired them about the purpose of the visit. They were asked for their COVID-19 RT-PCR reports and told not to elave the hotel until the health authorities give them clearance.

Speaking to reporters, the superintendent of police (West Tripura) Manik Das admitted that the I-PAC team is being “questioned” in an Agartala hotel as part of “routine police check-ups”.

“On Saturday we noticed that in a hotel named Woodland Park, around 22 persons who all came from outside of Tripura, were staying. We verified about the purpose of their visit, amidst the COVID-19 situation. We found that they visited many interior places across the state and interacted with many people,” Das said.

He also said, “According to protocol, they all underwent COVID-19 tests on Monday morning. Until the reports are received, they will be staying indoors. There is no matter of arrest. As they came from outside, we took this step. People from UP, Tamil Nadu, West Bengal, Rajasthan and many other places came. They said they came for research work, which is under verification.”

While a member of I-PAC, who didn’t wish to be named, said, “Before we came to Agartala, we underwent RT-PCR tests and obtained a negative report. Suddenly on Sunday night, the police came and ordered us to stay indoors. On Monday, we had to undergo COVID-19 tests forcefully.”

A senior official from the Chief Minister’s Office (CMO) said that the I-PAC team was asked to stay inside their hotel since they are a large group comprising 23 people and the government wants to avoid any “unwanted” spread of COVID-19.

The Trinamool Congress (TMC) national general secretary Abhishek Banerjee tweeted that the I-PAC employees were kept under house arrest since the BJP is “rattled” by his party’s victory in Bengal. The TMC employed I-PAC’s services during the election.

“The fear in @BJP4Tripura  before even @AITCofficial  stepped into the land, is more than evident! They are so rattled by our victory in #Bengal that they’ve now kept 23 IPAC employees under house arrest. Democracy in this nation dies a thousand deaths under BJP’s misrule!”.

President of the Tripura unit of TMC Ashish Lal Singha condemned the step and said it was an attack on democracy.

“I am shocked after witnessing such an incident in my state. It is an attack on democracy. It was not the culture of Tripura. The BJP is panicked following the overwhelming response and support to the TMC due to the misrule of the BJP-led government in Tripura,” Singh said.