With assembly elections a year away in the state, the resignations of Sudip Roy Barman and Asish Kumar Saha could cost Tripura BJP dear.

With assembly elections a year away in the state, in February 2023, the resignation of both Barman and Saha from the party’s primary membership is likely to cost the BJP dearly given that they had played a key role in the last assembly election paving the way for BJP’s victory.

Once considered a strongman in the BJP, Barman distanced himself from the party leadership over the last few months before finally quitting on Monday. Barman, who is the son of former Tripura chief minister Samir Ranjan Barman, had left Congress in 2016 and joined Trinamool Congress. A year later, he and five other Trinamool Congress MLAs joined the BJP.

Prior to the assembly elections in 2018, Barman along with a few other MLAs joined BJP, saying they were aligned with the ‘common cause’ of ending a 25-year-old Left rule in Tripura.

Speaking to reporters after his resignation, Barman said, “We have heaved a sigh of relief after resigning from BJP because this government has failed miserably to deliver. No MLA, no minister can exercise their authority under this government. Our orders are not being taken seriously at the ground level. Only one man’s voice is being heard and his orders are being carried out.” 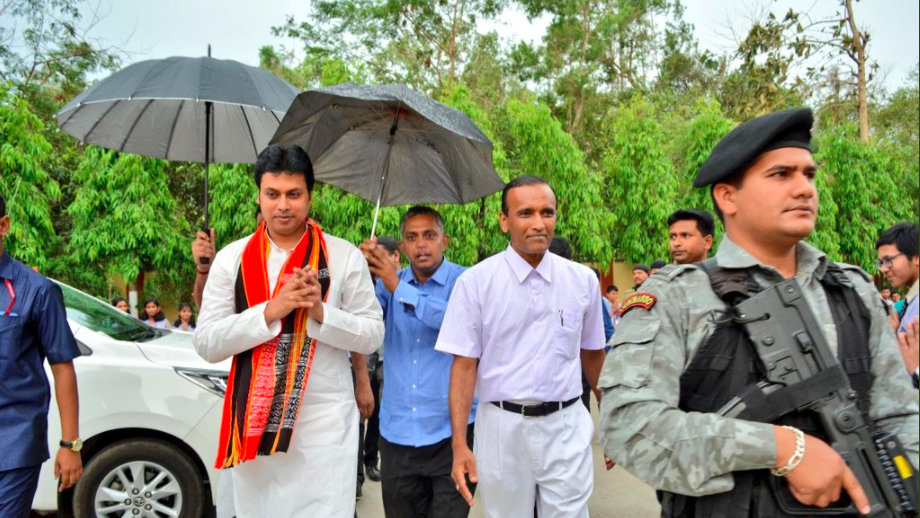 He accused the Biplab Deb government of unleashing a “reign of terror” across the state, throttling democracy as a result.

“The voice of media has been muzzled. Now it’s our duty to revive democracy in our state and ensure that all democratic institutions run in accordance with the constitution. Though this a democratic country, those running it have an autocratic mindset,” he lashed out at the BJP government in the state and at the Union.

When asked about his future course of action, Barman said, “Let’s see. We are leaving for Delhi and we shall explore all possible options. You will come to know about them on the 12th of this month.”

Continuing his tirade against Deb’s government, he said, “This government has utterly failed. All the promises made have turned out to be hollow, and it is crystal clear that the people of the state have been fooled. Their intention is not to deliver goods for people, but to loot.”

Meanwhile, Tripura assembly Speaker Ratan Chakraborty said, “I have received their letters. They did not raise any allegations in the letters, but only expressed their inability to continue as members of the House. Under Section 364 of the Business Conduct, I have instructed my secretary to examine the matter.”

Sources close to Barman hinted that he is likely to join the Congress party at All India Congress Committee headquarters in New Delhi. They are likely to return to Tripura on February 12 and are expected to make formal announcements.

Barman had already made it clear that he will not fight the 2023 assembly elections on a BJP ticket. He had also toured the length and breadth of the state and interacted with his followers and grassroots leaders in the last couple of weeks.

With these exits, the BJP’s strength in the 60-member assembly has come down from 36 to 33. Earlier, BJP legislator Ashish Das resigned after levelling allegations on the party leadership and joined Trinamool Congress last October.

A key player behind BJP’s victory in the 2018 Tripura polls, Barman was appointed as health minister only to be dropped a year later.

Sources in the BJP said that Barman was dropped from the state cabinet because of his “anti-party activities”. He is also known to have had an uneasy relationship with chief minister Deb when he was in the state council of ministers.

The relationship between Deb and Barman further worsened when the latter was dropped from the state cabinet in June 2019 and Deb kept the health portfolio for himself. Subsequently, Roy openly criticised Deb’s government for the “mismanagement” of the COVID-19 pandemic in the state. In another instance, Barman was booked for paying an “unauthorised visit” to a COVID-19 care centre in 2020.

With elections a year away, Barman and Saha will have Deb and Tripura BJP worried. According to sources, more BJP MLAs are expected to quit the party in the coming months.

The sources also added that the BJP leadership had recently offered a ministerial berth to Barman to quell the rebellion within the party, but to no avail.

On August 29, 2021, Barman took part in a meeting convened by disgruntled BJP MLAs. The agenda of the meeting was to bring the attention of central party leadership to the ‘mistakes’ of the Tripura BJP unit and the functioning of the state government under the leadership of Biplab Deb. Along with Barman, the meeting was attended by MLAs Asish Kumar Saha, Dibachandra Hrangkhawl, Asish Das and Burbamohan Tripura.

Following the resignations on Monday, the royal scion and chairman of TIPRA, Pradyot Kishore Manikya Debbarma, took to Twitter and said, “I am not surprised at the resignation of Sudip Barman as he had already made it clear to me a long time ago. That he was frustrated and upset with the government, in fact,  I am surprised that it took so long to take this step. It is his decision to choose what he wants to do next. Tipra is an independent political movement, and this is an internal matter of the BJP so we would not like to comment further on this matter. We will not dilute or compromise on our ideological or principal position. #WeAreTipra.”