The CPI(M) has demanded a re-poll in some polling stations. Congress is likely to follow suit. Women queue up at a polling booth in Tripura to cast their votes in district council polls held on Tuesday, April 6. Photo: Special arrangement.

The polls saw 85.74% turnout, amidst high security across 1,244 polling booths across the council.

The Tripura district council elections, held in 28 out of 30 seats, were mainly contested among CPI(M), which had been in power in the Autonomous District Council for the last four terms straight, the ruling BJP-Indigenous Peoples Front of Tripura (IPFT) alliance, which now rules the state, and the Tipraha Indigenous Progressive Regional Alliance (TIPRA), a new alliance of indigenous parties of Tripura headed by royal scion Pradyot Kishore Manikya Debbarma.

In the 30-seat TTAADC, 28 are elected, while the remaining two are nominated by the governor.

Speaking to reporters on Tuesday, state election commission secretary Prasenjit Bhattacharjee said, “We have not received any information of major incidents…some of the electronic voting machines (EVM) malfunctioned but they were readily replaced without any disturbance to the poll process.”

The assistant inspector general of police (law and order) Subrata Chakraborty said that the situation of the state had been peaceful during the polls. While no major violence was reported, scuffles broke out between political parties sporadically, including the ruling BJP and TIPRA. But the police intervened and resolved the matter.

Accusing the ruling BJP of massive poll rigging and booth capturing, the chief of Tripura Pradesh Congress Pijush Kanti Biswas stated that this poll would be a game-changer for the BJP in state politics as people have started rejecting them.

“Since [Monday] night, bike-borne BJP goons threatened voters and polling agents of our party. In some places they captured the booths; they attacked our polling agent during polling hours. We condemned it. But this time the people also came in protest against these unruly activities. BJP is now losing support. This poll has proved that people have rejected the saffron party,” Biswas said.

He also informed that in some polling stations the Congress may demand a re-poll.

Demanding a re-poll in 65 booths, the main opposition of the state, CPI(M), also echoed the same concerns. The state secretary of the party Gautam Das alleged that the ruling BJP-IPFT allegedly broke the law in non-Autonomous District Council areas.

The chairman of TIPRA, Pradyot Kishore Manikya Debbarma, claimed that voting was peaceful but in some parts, the BJP-IPFT tried to capture booths and attacked TIPRA workers.

“They created a lot of problems during polling hours,” Debbarma said.

However, state BJP spokesperson Subrata Chakraborty alleged that TIPRA and CPI (M) hatched a conspiracy to disrupt the poll.

“They failed to disrupt the poll as the police have taken appropriate measures. They tried to attack our karyakartas. If they want, they could have retaliated but our members didn’t. Many of our workers were injured due to attacks carried out by TIPRA and CPI(M). They prevented our polling agent from entering a polling booth. It has been proved that TIPRA and CPI(M) are never for development. They just want to create anarchy in the state,” Chakraborty said.

Most voters stressed on pure drinking water, road connectivity and education as poll issues. Many are dissatisfied with the role of the Left Front government which has ruled the council for many years.

“There has been no development in tribal areas. I hope that the new party that will form the council will definitely try to fulfil our two major demands of pure drinking water and road connectivity. And education too,” said Samir Debbarma, a voter.

Seventy-year-old Manoranjan Debbarma said that the CPI(M) had ruled the district council for several years but no work had been carried out in the tribal villages.

“We live in hilly areas and the major issues which we are facing are drinking water and road connectivity,” he told The Wire. 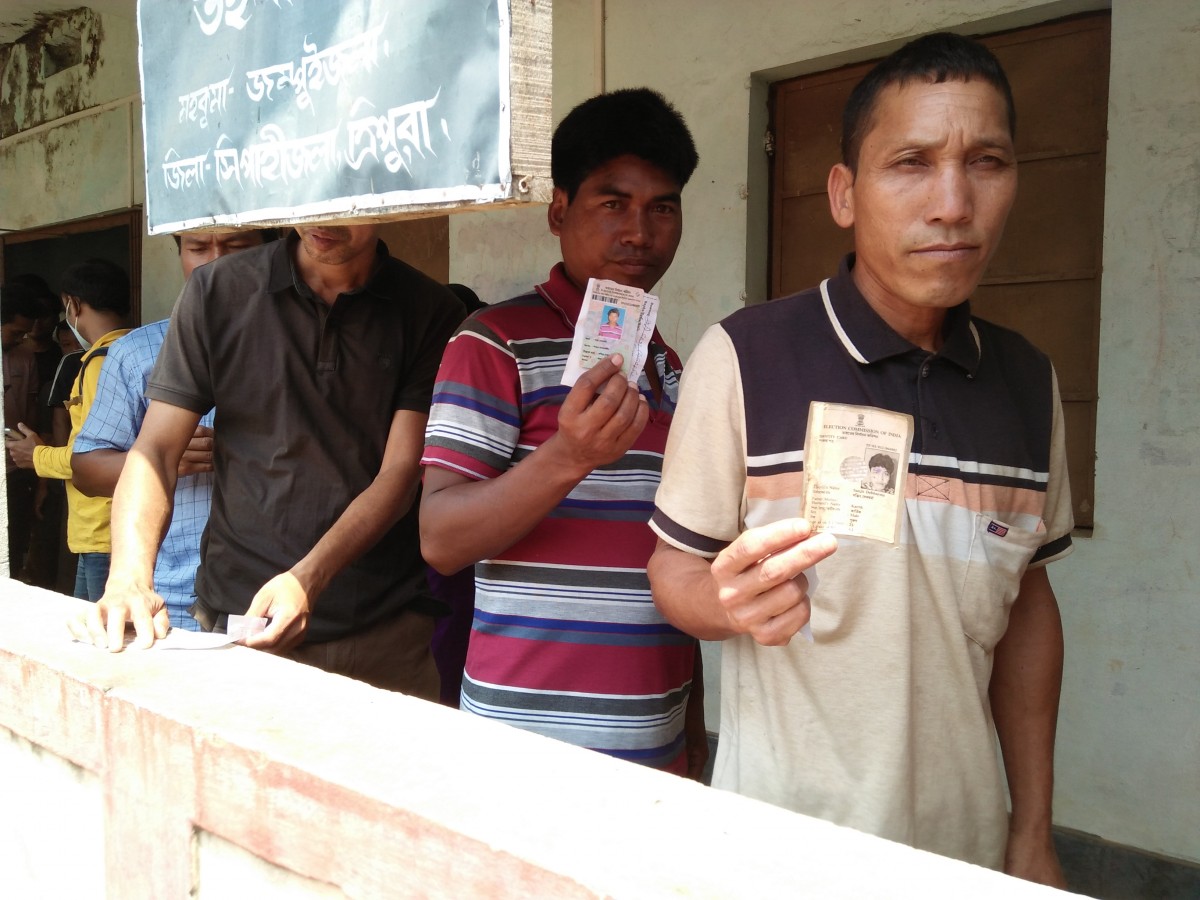 Voters outside a poll booth in Tripura to cast their votes in the district council polls held on Tuesday, April 6. Photo: Special arrangement.

The Young Mizo Association (YMA) had earlier threatened to boycott the polls as the people of Jampui Hills in the North District of Tripura were facing crises of pure drinking water and road connectivity.

Jampui Hills is situated about 200 kilometres from Agartala in Tripura’s North district under Kanchanpur Sub-division and is the highest hill range in the state bordering Mizoram. It is 3,000 feet above sea level.

“Elections come and go but no one looks into our demands. More than 10,000 people are living in Jampui Hill which shares the interstate boundary with the Mizoram. But no one is looking at the problems which we are facing. We are facing an acute crisis of drinking water and road connectivity,” president of Young Mizo Association J. Thangmawia had said.

Chief minister Biplab Kumar Deb, for his part, has assured the people that by 2022 his government would connect all the houses with drinking water facility under Atal Jal Dhara Mission.