The CPI(M) alleged that as many as 39 attacks were carried out on party offices, houses of CPI(M) leaders and supporters in Agartala after election results were declared on March 10. 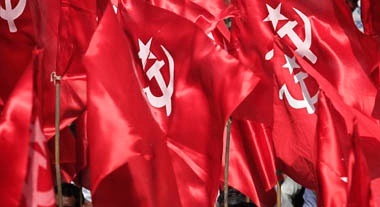 New Delhi: Opposition parties in Tripura – the Communist Party of India (Marxist), or the CPI(M), and the Trinamool Congress (TMC) – have alleged that their activists and offices have been targeted with political violence in the state after election results were declared on March 10, Thursday.

According to PTI, the CPI(M) alleged that as many as 39 attacks were carried out on party offices, houses of CPI(M) leaders and supporters in Agartala after the Bharatiya Janata Party’s (BJP) poll victory in four states.

CPI(M) state secretary Jitendra Chowdhury, in a letter addressed to chief minister Biplab Kumar Deb on March 11, said, “In a parliamentary democracy, elections do take place and one party wins. It is natural that the winning party leaders, workers and supporters will rejoice. But setting opponent’s offices on fire and ransacking their houses amounts to gross violence of democratic rights.”

“I hope you (Deb) will take appropriate steps against those who are involved in the recent violence and arrange compensation for the victims,” he wrote.

Chowdhury also expressed concern over BJP supporters riding bulldozers to celebrate its win in four states, stating that it was a first in the state. “I appeal to all peace-loving people to raise their voice against this fascist style of ruling in Tripura,” he added.

According to the Hindustan Times, he alleged that political violence started prevailing in the state under the regime of the saffron party. “In a democracy, these incidents are unwelcome. Not a single person has been arrested in these cases so far.”

The All India Trinamool Congress’s Tripura unit also alleged violence against opposition workers and demanded police action against the perpetrators.

TMC convener Subal Bhowmik told the newspaper, “The BJP-backed miscreants attacked party offices and houses of our supporters in the name of victory. The administration is not taking any step in this matter.”

He alleged that the party also received reports of a few shops being set ablaze at Bishalgarh in Sepahijala district.

He further said that the party would go for a massive protest, if action is not taken against the perpetrators.

The BJP on Thursday stormed back to power in Uttar Pradesh and also retained Uttarakhand, Manipur and Goa, while Arvind Kejriwal’s Aam Aadmi Party (AAP) scripted a stellar victory in Punjab, winning a three-fourths majority.

The BJP hasn’t reacted to their allegations so far, the daily said.