Due to retire on May 31, Alapan Bandyopadhyay had received a three-month extension from the Centre at the state government's request because of the Covid-19 wave in West Bengal and his experience in cyclone relief. 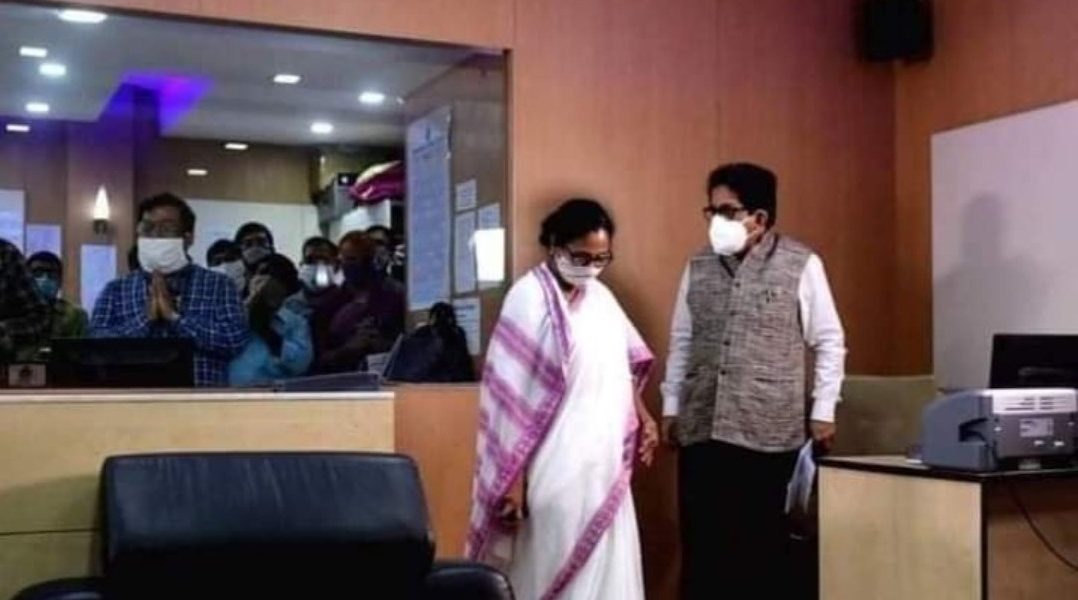 Kolkata: Cyclone Yaas wrecked the country’s eastern coast, hitting West Bengal and Orissa on Wednesday, and inflicting large scale damage to human habitats and farmlands. On Friday, Prime Minister Narendra Modi undertook an aerial survey across parts of the two states to ‘take stock’ of the damage caused by the cyclone.

West Bengal chief minister Mamata Banerjee was slated to be part of the review meeting in West Medinipur’s Kalaikunda but gave it a miss at the last moment. She cited an “important administrative meeting” in the cyclone-struck district of East Medinipur as the reason for her unavailability. Banerjee, however, went to the venue in Kalaikunda and met the prime minister separately, handing over a report of the damage wrought and funds required for relief and reconstruction. She then left the venue before the scheduled administrative meeting began.

“I have met the prime minister and handed over to him demands for a package of Rs 20,000 crore. But I could not stay in the meeting because of the state’s administrative review meeting at Digha,” Banerjee told the media later.

Quoting an unnamed senior official at the state secretariat, Outlook reported that West Bengal had informed the Centre in advance of its reservations about the scheduled presence of  BJP MLA Suvendu Adhikari in the meeting with Modi.

Adhikari, once Banerjee’s close confidante, joined the BJP three months before the state assembly election. He and Banerjee locked horns against each other from East Medinipur’s Nandigram seat, where the former won with a slender margin.

A section of BJP leaders defended Adhikari’s presence in the review meeting as he is the “leader of opposition” in the state assembly. However, the leader of opposition was not present when Modi met Banerjee’s counterpart in Odisha, Naveen Patnaik.

Earlier this month, when the prime minister visited Gujarat to review the damages caused by cyclone Tauktae, the LoP of Gujarat assembly Paresh Dhanani was also not in attendence.

Right after the news broke that Banerjee had skipped the review meeting with the prime minister, a political slugfest between the BJP and Trinamool Congress (TMC) started. Union ministers, chief ministers of BJP-governed states and scores of senior BJP leaders took to Twitter to condemn the West Bengal CM’s decision.

Union home minister Amit Shah tweeted, “Mamata Didi’s conduct today is an unfortunate low. Cyclone Yaas has affected several common citizens and the need of the hour is to assist those affected. Sadly, Didi has put arrogance above public welfare and today’s petty behaviour reflects that.”

In a series of tweets, defence minister Rajnath Singh said, “Today’s development in West Bengal is shocking…. This type of behaviour with the prime minister, who has come with the intention of helping the people of Bengal in the time of calamity, is painful. This is an unfortunate example of placing political differences above the constitutional duty of public service, which is the core of the Indian federal system. It hurts the sentiment too.”

Bengal governor Jagdeep Dhankhar, known for being outspoken on administrative issues in the state, also condemned Banerjee’s decision to skip the meeting. A “confrontational stance ill serves [the] interests of the state or democracy. Non-participation by the CM and officials [is] not in sync with constitutionalism or rule of law,” he said.

Veteran TMC leader and MP Kalyan Banerjee replied to  Dhankhar saying, “Can you tell us under what provision the Nandigram MLA can be present in the review meeting between the Central government headed by Narendra Modi and the state government headed by Mamata Banerjee. Stop doing politics in this situation.”

Another senior TMC MP, Sukhendu Sekhar Ray, said, “Three weeks ago, the people of Bengal showed them their place. Today, central ministers gang up on Twitter (yes!) to give sermons to the Bengal CM. Some people never learn. After murdering federalism, they must know that federalism is not a one-way traffic. Learn from her, don’t lecture her.”

However, a major blow came later on Friday night, when in an unprecedented move, the Centre recalled West Bengal chief secretary Alapan Bandyopadhyay and directed him to report to the Department of Personal Training (DoPT) in North Block on May 31.

The irony is that Bandyopadhyay, a 1987-batch IAS officer, is slated to retire on May 31, but had been granted a three-month extension by DoPT on the state’s request just this week. Bandyopadhyay is known to be close to the chief minister and was leading the state’s Covid control. He was even made  chairman of various task forces formed for cyclone relief and restoration works.

The prime minister would have known the chief secretary was leading the administration’s response to the cyclone damage as he met him at Kalaikunda. Since Modi heads the appointments committee of cabinet (ACC), he ironically decided to get the ACC to take the decision to transfer Bandyopadhyay out soon after having discussed cyclone relief with him. 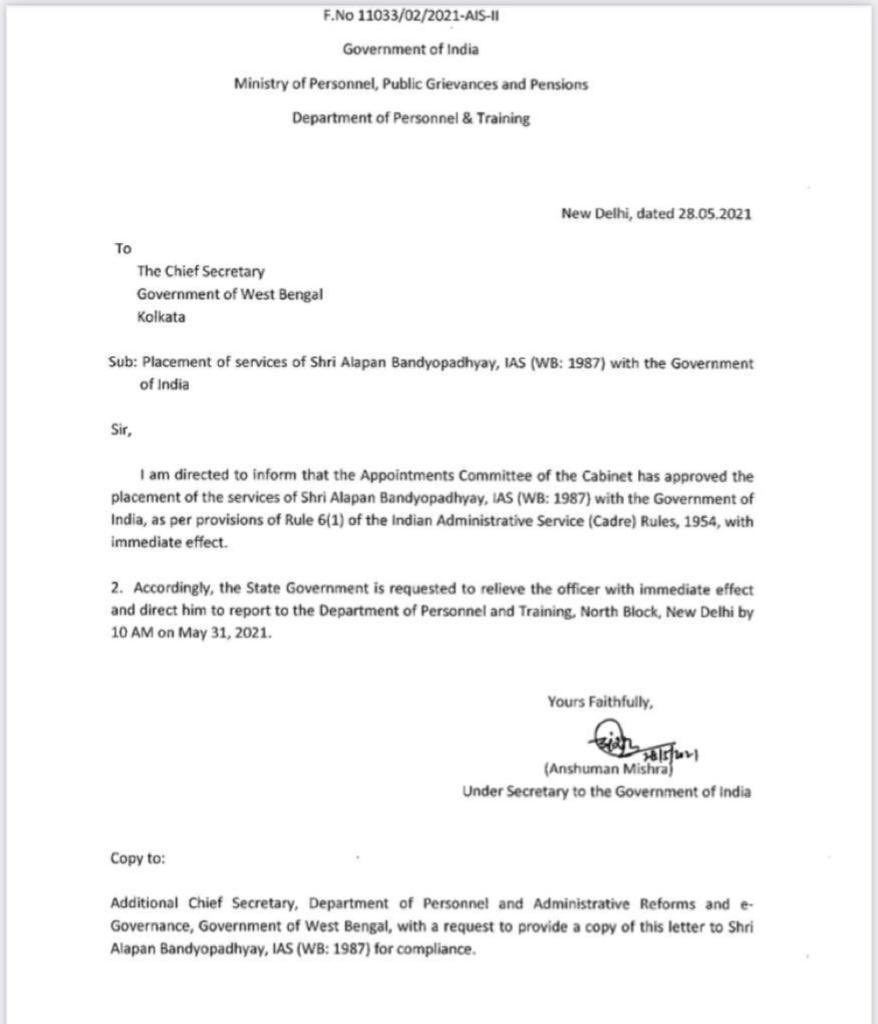 Reacting to Bandyopadhyay’s transfer order, TMC spokesperson Kunal Ghosh told the media, “The BJP is unable to digest the defeat in Bengal. This move by the Centre will set a new benchmark of vindictive politics. While the state is fighting Covid and cyclone, they (Centre) transfer the chief secretary, who just got an extension. This BJP is Bengal’s enemy.”

TMC MP Sukhendu Sekhar Ray tweeted, “Has this ever happened since Independence? Forced central deputation of a chief secretary of a state. How much lower will Modi-Shah’s BJP stoop? All because [the] people of Bengal humiliated the duo and chose Mamata Banerjee with an overwhelming mandate.”

Given the series of steps taken by the Centre following the assembly elections, the Trinamool Congress believes the BJP is now firmly in revenge mode for the defeat.

Right after the election results, political violence broke out in different parts of West Bengal. While all the incidents were political, the saffron party claimed some were communal by spreading fake photographs and videos.

There has also been a coordinated effort by  BJP leaders and pro-BJP individuals to portray the state’s law and order in such a situation that president’s rule must be invoked in Bengal.

All of the four arrested leaders were immediately granted bail by the special CBI court, but the bail order was stayed on the same day by a division bench of Calcutta High Court in a late-night hearing.

On May 19, a two-judge bench, comprising acting Chief Justice Rajesh Bindal and Justice Arijit Banerjee, passed a split verdict in relation to the interim bail application of the four leaders arrested. The matter was sent to a larger bench for further examination due to a difference of opinion. However, both judges agreed that the leaders should be kept under house arrest until further order.

The CBI appealed against the high court order in the Supreme Court and also pleaded to shift the case outside the state. The apex court said it did not want to deprive the high court bench of the opportunity to hear and decide  the case and directed the Central agency to withdraw its petition.

On May 28, a five judge bench of Calcutta high court granted interim bail to the four TMC leaders on condition of them posting bonds of Rs 2 lakh each.

In an unprecedented move, a senior judge of the  high court,  Arindam Sinha, wrote a letter to all judges of the court – including acting chief justice Rajesh Bindal – questioning the manner in which the CBI’s  plea was listed before a division bench in the Narada case and the staying of bail granted by a CBI court to the four politicians.

“Our conduct is unbecoming of the majesty the high court commands. We have been reduced to a mockery. As such, I am requesting all of us to salvage the situation by taking such steps, including convening a full court, if necessary, for the purpose of re-affirming [the] sanctity of our rules and our unwritten code of conduct,” he wrote.

Note: The story has been edited to clarify that the chief secretary met Prime Minister Narendra Modi at Kalaikunda along with chief minister Mamata Banerjee, and not as part of the ‘review’ meeting.