The TMC leadership has claimed that the BJP state government has attempted to scuttle the joining function with the misuse of COVID-19 rules. 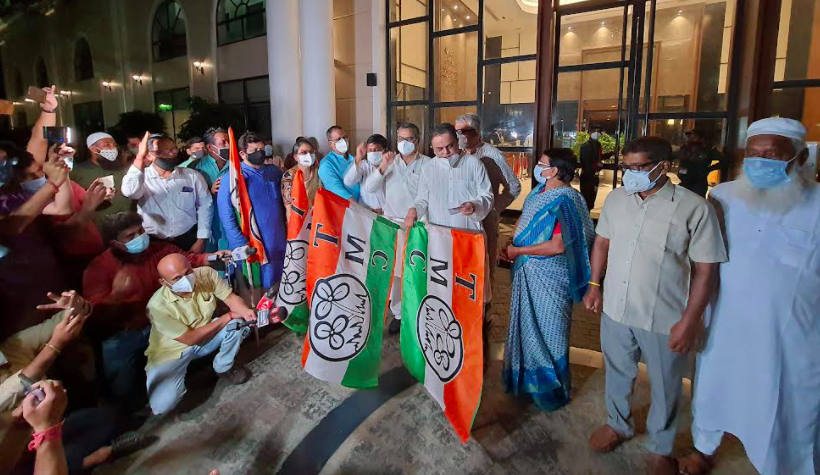 TMC leaders with new entrants in Tripura. Photo: By arrangement

Agartala: The Trinamool Congress, which had almost vanished from Tripura, could be making a comeback now with seven leaders – including a former MLA and a former minister leaving the Congress and joining TMC late on July 29.

Bengal education minister and TMC leader Bratya Basu, announcing the MLAs’ move, said that due to administrative restrictions, political activities of his party were scuttled.

“We sought permission from the district magistrate of West Tripura district for a joining function but he didn’t allow us. We will again request the DM. Whenever we tried to organise any programme they (the ruling BJP government) prevents us, but can they thwart the joining of people?” Basu said.

“There is a total weekend curfew in Tripura. The state government has issued orders that no political activities are allowed. We want to abide by the set rules. So, we called the seven new entrants instead of 40 people from Congress,” he said.

The arrival of TMC leaders

Shortly after a team of 23 members from Prashant Kishore’s Indian Political Action Committee (I-PAC) were detained in their hotel room on Sunday night, five leaders of TMC including two ministers, one Rajya Sabha MP and one Lok Sabha MP arrived in the state to “release” them.

The I-PAC team had been in Tripura for a survey on public opinion on governance. Police had cited COVID-19 protocols to keep them in their hotel. 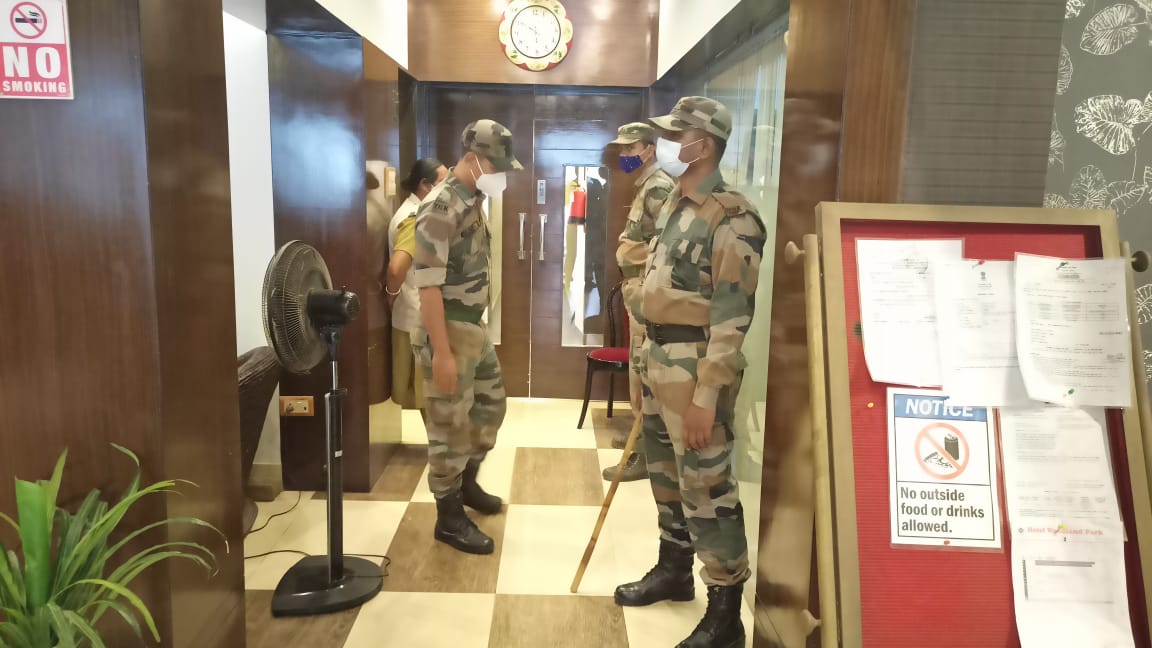 Police officials along with jawans of Tripura State Rifles deployed at the entrance of the hotel where the I-PAC team has been detained. Photo: By arrangement

The Additional Chief Judicial Magistrate S.B. Das granted bail to the I-PAC members who were summoned to appear before police on August 1, following registration of an FIR against them on Tuesday, July 27.

Their counsel, who is also incidentally the Pradesh Congress Committee president, Pijush Kanti Biswas, said that a case against the state government will be filed for “harassing” them.

Additional Public Prosecutor Bidyut Sutradhar said a complaint was filed by the Sub-Divisional Magistrate, Sadar, against the I-PAC team, which was registered at East Agartala police station under Section 188 of IPC (disobedience to order duly promulgated by public servant) and under the National Disaster Management Act.

“The investigating officer served them notice to meet him on August 1. There was no apprehension of arrest. But still, they surrendered before the court, prayed for bail and the court granted them bail,” Sutradhar told reporters.

Police have said that as soon as they tested negative for COVID-19, the team was allowed to go, on Tuesday night itself.

“They were not detained and neither they were arrested. For COVID-19, they were instructed to stay indoors. But when their report came negative we freed them,” a senior police official said.

Meanwhile, TMC’s O’Brien alleged that the team was detained by Tripura Police on directions of the central leadership of BJP.

In 1999, former Tripura chief minister Sudhir Ranjan Majumder started TMC’s first state unit in Agartala. In 2016, it was revived with the joining of six Congress MLAs. Before the 2018 state assembly election, they all joined BJP.

While TMC is spurred by Mamata Banerjee’s victory in West Bengal, its face in Tripura, Subal Bhowmik, has changed political parties seven times till now.

Bhowmil started his political career with Congress. He then joined Grameen Congress, moving to TMC, then BJP (becoming its state vice-president in 2018) and then in 2019 rejoining Congress. He fought the Lok Sabha election and lost to Pratima Bhoumik who is now an MoS in the Modi cabinet. 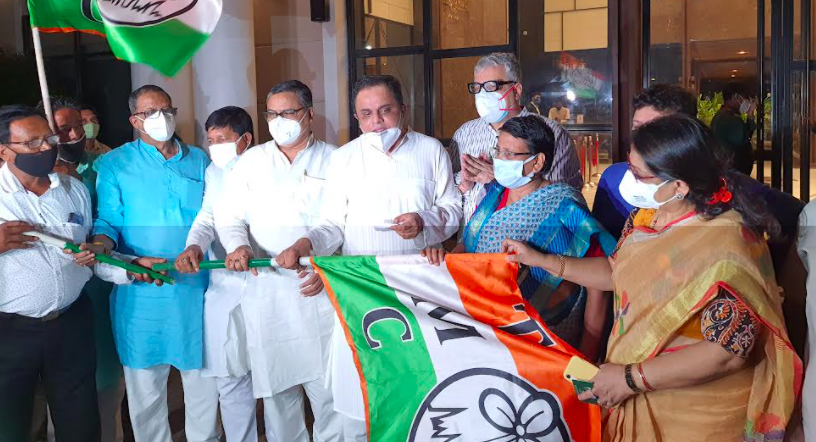 TMC leaders with new entrants in Tripura. Photo: By arrangement

He has now joined TMC, for “interest of people and the sake of time,” he said.

“It is true that we have had to take decisions in the interest of the people of the state, for the sake of time. Our leader Mamata Banerjee has put up such a fight that people across the country accepted she is the only leader who can show direction to this country and take it towards development,” Bhowmik said.

He also criticised the BJP government and alleged that there is a ‘jungle raj’ in Tripura for the last four years.

“There is no freedom of people, freedom of speech or democratic rights. The ruling party can do everything…They want to create an ambience of terror by weakening the federal structure of the government. People don’t have their basic rights,” he alleged.

While claiming that TMC will form the government in Tripura in 2023, Bhowmik has said BJP will not win any seat in the coming assembly polls.

Congress’s Pijush Kanti Biswas said the seven leaders have no political stability and they are well-known for frequently changing political parties.

“In Congress, they were very inactive. For the last one and half years they have had no role in the party and no connections to the party. Now, when we started working, they left. They are rudderless ships and lack political material and sincerity,” he said.

BJP spokesperson Subrata Chakraborty said that these leaders are trying to do ‘shifting cultivation’ between political parties.

“They have personal and political freedom. We have nothing to say about it. They are joining jungle raj, not leaving it. The situation of West Bengal reflects their behaviour,” Chakraborty said.