She argued that all the signs of 'early fascism' could be witnessed in the country today.

New Delhi: When first-time Trinamool Congress MP Mahua Moitra rose up to oppose the Motion of Thanks on June 25, not many thought she would deliver one of the most spirited speeches in recent parliamentary history.

Moitra, legislator from Krishnanagar in West Bengal, defeated BJP’s Kalyan Chaubey by more than 63,000 votes in the recent general election. She took on the government point-by-point in her maiden speech.

Kicking off her speech by categorically saying that she “humbly accepted the mandate” in favour of the BJP-led National Democratic Alliance, she added “dissent is all the more important” today. She said this was because there are no “natural checks and balances in the Lok Sabha” because of the opposition’s shrunken strength and the ruling party’s unprecedented numbers.

She said that since the house belongs to the opposition, she was speaking to “reclaim the inch that has been guaranteed to us”.

“You may say that ache din are here and that the sun will never set on the Indian Empire that it is seeking to build. But then you are missing the signs. Only if you open your eyes, you will see there are signs everywhere,” she added.

She then went on to list seven pointers that she felt were all “signs of early fascism”.

One, she said that the BJP’s version of hyper-nationalism was tearing into the national fabric. “It is superficial, xenophobic, and it is narrow. It is lust to divide, it is not a desire to unite.” As a result, she said that the Constitution is under an unprecedented threat.

She said that the anti-immigration laws like the NRC and Citizenship Bill advocated by the Modi government are being used to target one community in particular – Muslims.

“This country is being torn apart. Citizens are being thrown out of their homes and being called ‘illegal immigrants’. People who have lived in this country for 50 years are having to show a piece of paper to show that they are Indians. In a country where ministers cannot produce degrees to prove that they graduated from college, you expect dispossessed people to show papers, to show that they belong to this country?” she asked in an apparent dig at Narendra Modi and Smriti Irani.

Ruling party MPs incessantly jeered her, often interrupting her speech with loud shouts and ridicule. Yet, she continued, urging the chair to put the house in order. “Slogans and symbols are being shown to test allegiance. (Let me say), there is no one symbol to show patriotism.”

Two, she hit out at the government for its alleged contempt for human rights, saying a “resounding disdain” has permeated every level of government.

“There is a ten-fold increase in the number of hate crime from 2014 to 2019. It is like a valuation of an e-commerce start up. There are forces in this country who are sitting there, just pushing these numbers up.”

From the lynching of Pehlu Khan in Rajasthan in 2017 to Tabrez Ansari in Jharkhand last week, she said “the list is not stopping”.

Three, Moitra said that “there is an unimaginable subjugation and controlling of mass media today.”

She pointed out that five of the largest news media organisations are “indirectly controlled or indirectly indebted to one man in this country” and alleged that news television channels have been reduced to broadcasters of propaganda for the ruling party.

“Let the government come out with facts and figures to show (the amount spent on) advertisements,” she said, demanding that the ruling party reveal how much money was spent on advertisements on each TV channel. She said the Union information and broadcasting ministry “employs over 120 people” just to monitor and control anti-government stories in media.

She said the elections were not fought on important issues like farmers’ distress and unemployment, but on “lies” circulated through WhatsApp. “You repeat and repeat a lie until it becomes the truth,” she said about the ruling party’s campaign, likening it to “Goebbels Doctrine”. (Joseph Goebbels was a German Nazi politician and Reich Minister of Propaganda of Nazi Germany from 1933 to 1945.)

Moitra said while the saffron party has attacked the Congress for encouraging political dynasts, it was not far behind in fielding such candidates. She said the Congress fielded 36 dynasts, while the BJP too gave tickets to 31.

Four, Moitra said that “there is an obsession with national security and identification of enemies” in the current political climate. She added that there is a fear of one mythical “kala bhoot” – an unknown enemy that doesnt’t exist and is only invoked to create fear among children – has pervaded everywhere.

In such times, the TMC MP said, “The achievements of the army is being usurped by one man”, referring to Prime Minister Narendra Modi. “The irony is that terrorist attacks have increased manifold. There is a 106% increase in the death of jawans in Kashmir,” she said.

Five, she said that never in the history of India have religion and government become so intertwined. “Members of the Parliament are concerned mostly with 2.77 acres of Ram Janmabhoomi while (they seem to be unconcerned) by the 80 crore acre that makes India,” she said.

Six, the Krishnanagar MP said that one of the most dangerous signs of this “early fascism” is the complete disdain for “intellectuals and arts”

“There is so much suppression of dissent. Funding is being cut for liberal education. Article 51 of the Constitution demands a scientific temperament. But everything we are doing is pushing India back to dark ages. Secondary school textbooks are being manipulated and distorted in order to indoctrinate. You don’t even tolerate questioning, let alone dissent.”

Also Read: Why Modi Government’s Persecution of Intellectuals Should Worry Us All

In her final point, Moitra said there is an “erosion of independence in electoral system”. She did not question the mandate, but said that the Election Commission of India was being used to transfer key officials. Many top level officials in Bengal were moved by the ECI weeks before the polls, much to the Mamata Banerjee government’s chagrin.

She ended her speech by saying that in 2017, a poster available in the Holocaust Memorial in the US featured all these “early warning signs of fascism“.

“I have the right to disagree,” she said, while finishing her maiden speech. 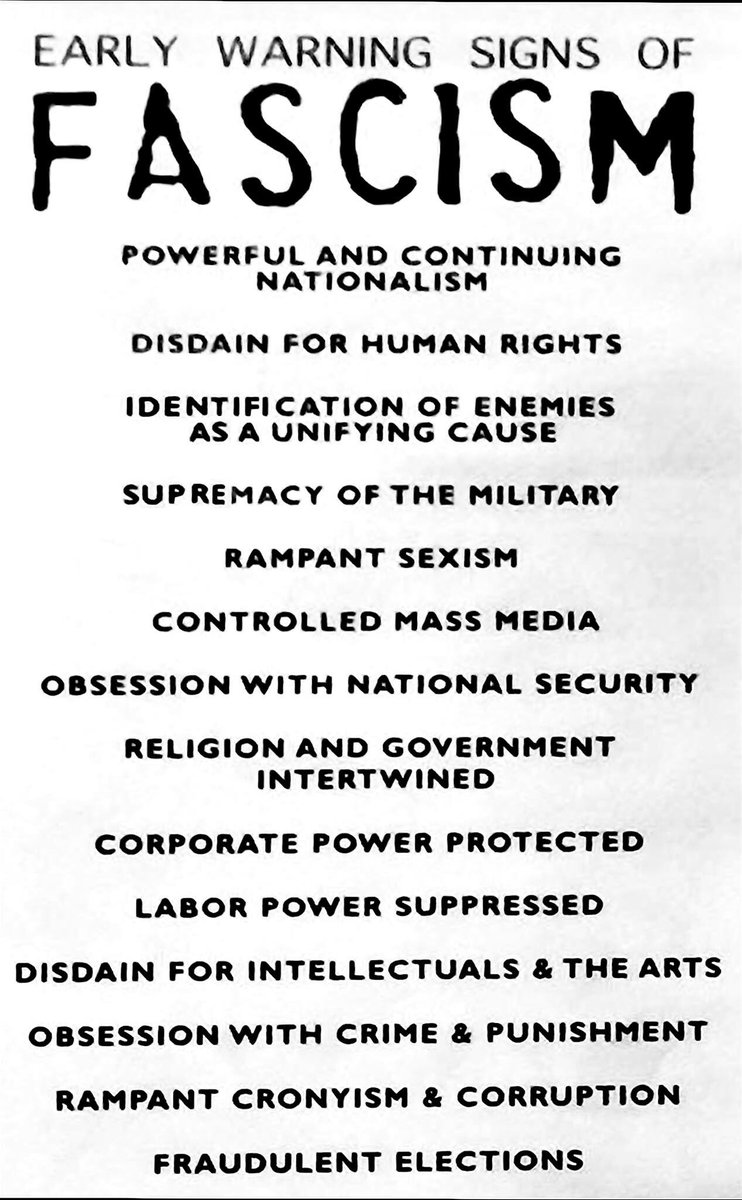 A copy of the poster that Moitra referred to.

Moitra was an investment banker before she became a politician, winning her first election from the Karimpur assembly seat in 2016. During her Lok Sabha campaign from Krishnanagar, she complained to the ECI that BJP’s Nadia district’s president Mahadev Sarkar used offensive and sexist remarks to target her. The poll body had then barred Sarkar from campaigning for 48 hours.

Her first petition was against the UIDAI’s attempts to map social media accounts to monitor popular sentiment through Aadhaar. Her second was against the Union home ministry’s notification that empowered ten government bodies to pre-emptively intercept, monitor or decrypt any computer to prevent any cognisable offence. Her third petition sought an interim stay on the Union government’s efforts to snoop into computers being used in West Bengal.