Inside and outside parliament, the party has been demanding accountability from the Union government on the surveillance allegations. 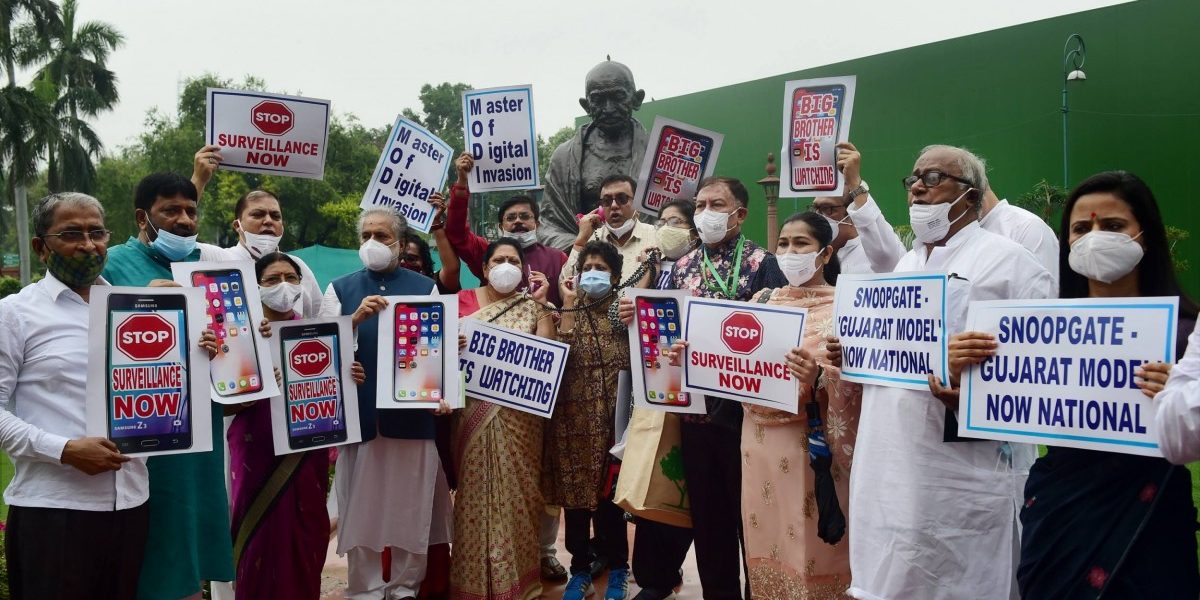 TMC MPs display placards as they stage a protest over the issue of surveillance during the Monsoon Session of Parliament, in New Delhi, Tuesday, July 20, 2021. Photo: PTI/Kamal Kishore

Kolkata: Days after an investigation by The Wire and and its media partners under the Pegasus Project revealed that an unknown government authority may have used Israeli surveillance technology vendor NSO Group to snoop on ministers, opposition leaders, journalists, the legal community, businessmen, government officials, scientists and rights activists, the Trinamool Congress (TMC) has upped the ante against the Narendra Modi government.

Members of opposition parties in the Rajya Sabha had given at least 15 notices under Rule 267, raised slogans and disrupted the proceedings which led to two adjournments on Tuesday morning over various issues, especially the Pegasus snooping allegations.

The Wire revealed on Monday that during the high-stakes West Bengal assembly election, the phone of poll strategist Prashant Kishor was broken into using NSO Group’s Pegasus spyware.

The investigation further found that the mobile number of Mamata Banerjee’s nephew Abhishek Banerjee, who is a two-time MP from Diamond Harbour and the national general secretary of the TMC, was also selected as a potential target for surveillance by a government client of NSO Group.

“Trinamool Congress will not allow the house of parliament to function until the Union government allows discussion on Pegasus snooping. The TMC is not alone in this, many opposition parties are also with us. We have to ask Modi-Shah where the money is coming from for this kind of surveillance,” said TMC’s leader of the Rajya Sabha, Derek O’Brien.

Watch: How Surveillance May Have Played a Role in Toppling of Karnataka Govt in 2019

On the issue of of potential snooping on the Supreme Court staffer who had accused former Chief Justice of India Ranjan Gogoi of sexual harassment, O’Brien said, “We should also press for Ranjan Gogoi’s resignation from the Rajya Sabha for extending undue favours to the government in the form of politically motivated judgements. Pegasus was used as a tool to even influence the judiciary.”

TMC MP Mahua Moitra took a dig at information and technology minister Ashwini Vaishnaw and said, “The newly-appointed IT minister lied on the floor of the Parliament on Monday, when he said in the past, similar allegations were made about the use of Pegasus on WhatsApp but there is no factual basis to these. Just want to remind the minister that in 2019, WhatsApp had sued the NSO Group for exploiting a vulnerability in its app to allow its Pegasus malware to gain access to user devices.”

While addressing the media, Moitra said, “Is the Indian government a client of NSO or not, we want clear answers from the prime minister, Union home minister or Union IT minister. What the Modi government is trying to do here is roll out the ‘Gujarat Model’ nationally. It is absolutely unpardonable how the BJP government has been snooping on all opposing voices across the country.”

During the assembly election in West Bengal, leaders of the BJP released a leaked audio clip of a telephonic conversation. The first one was between the West Bengal chief minister and her party leader Partha Pratim Ray, days after four local residents were killed in firing by security forces in Cooch Behar’s Sitalkuchi.

Days before the second phase of the election, senior BJP leaders Kailash Vijayvargiya and Shishir Bajoria played an audio clip to the media in which the TMC supremo was heard talking to a local BJP leader of Nandigram, Proloy Pal.

While the TMC then accepted the second phone conversation, the party dubbed the first audio clip as “bogus” and said it was “illegally and unlawfully” recorded at the BJP’s command.

Interestingly, while the Modi government denies investigative reports published by a consortium of 17 global organisations including The Wire, the saffron party’s leader and leader of opposition (LoP) in the West Bengal assembly, Suvendu Adhikari, on Monday said that he has call recordings of telephonic conversations of the police superintendent of East Medinipur and from Mamata’s nephew’s office.

“I have each and every call record, phone number of all those who called you from Abhishek Banerjee’s office. If you have the state government with you, we have the Central government with us,” Adhikari said.

Virtually threatening the SP, Adhikari said “A young boy has come here as a SP. I know all that he is up to, I am a veteran player. I want to tell him that you are a central cadre officer, so don’t indulge in anything for which you may get posted in Anantnag or Baramulla in Kashmir.”

When asked for reaction to Adhikari’s statement, O’Brien said, “The leader of opposition in Bengal through his statement just proved what we have been saying on the floor of the houses. That BJP government is snooping. He just proved the investigative reports that are coming out. Our leader Mamata Banerjee said a couple of years back that BJP has unleashed massive surveillance against opposition leaders. Her words are coming true.”