With 'ModiShahSurmardini,' Mamata Banerjee's TMC Shows It's Loathe to Let Go of 'Didi as Devi' Trope

A poster calling the TMC chief 'ModiShahSurmardini', indicating that she has defeated Modi and Shah just as Durga had defeated the Mahishasur demon, has triggered debate on the practice. 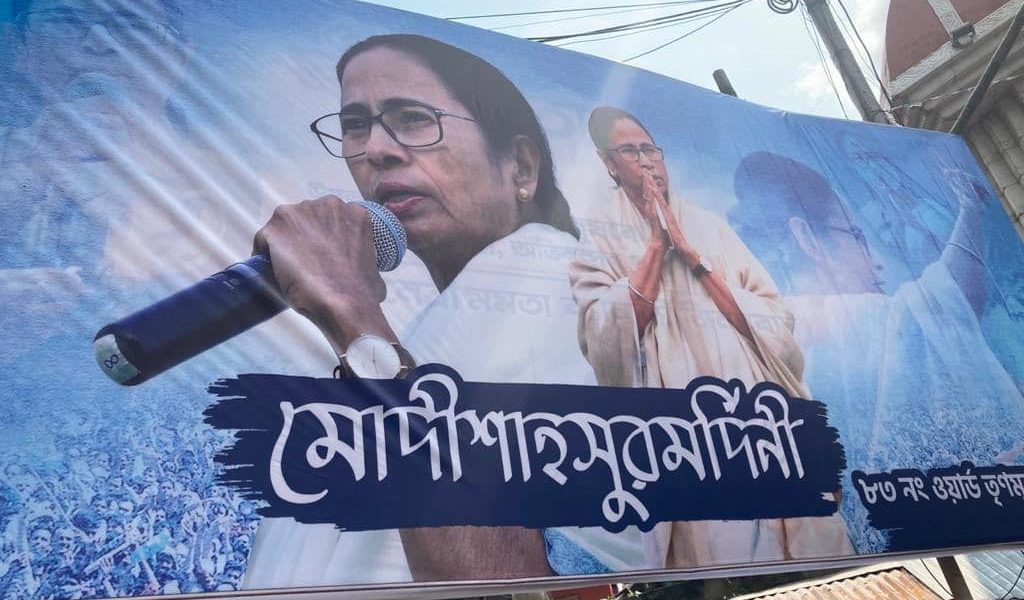 Kolkata: Even before Mamata Banerjee’s victory in the Bhabanipur by-poll was announced on the afternoon of October 3, a huge hoarding came up on Harish Mukherjee Street where the Bengal chief minister lives.

It had an image of Banerjee with folded hands and described her as “ModiShahsurmadini.” The word is an amalgamation of (Prime Minister Narendra) Modi, (Union home minister Amit) Shah and the mahishasurmardini, the epithet for the deity Durga which translates to ‘one who slays the demon Mahishahsur‘.

The meaning implicit in the term is that Banerjee is the “slayer” of Modi and Shah.

The hoarding was put up by the Trinamool Congress (TMC) committee of ward number 83 of the Kolkata Municipal Corporation which is one of the eight wards making up the Bhabanipur assembly seat.

Soon, photos of the hoarding went viral on social media. TMC Lok Sabha MP and national spokesperson Mahua Moitra was among those who shared it.

Mahishasurmardini is one of the most popular names for Durga, arguably Bengal’s most popular deity – a space contested only by Kali. Bengalis consider her the mother goddess and also culturally consider her a daughter. One of the reasons behind the popularity of this name for Durga is the iconic radio programme originally conceived and produced by the legendary trio of Birendra Krishna Bhadra, Pankaj Kumar Mullick and Bani Kumar that has aired on the Akash Vani every morning of Mahalaya for the past nine decades. The festivities around Durga Puja, too, start with the Mahalaya and the day is synonymous with the eponymous programme in which popular Bengali musicians sang.

This use of the word to portray the Bengal chief minister as the biggest challenger to the country’s two most powerful men, and especially their depiction as an asur or demon, did not go down well with supporters of the country’s ruling force, the Bharatiya Janta Party (BJP).

Some of them picked up an argument started by BJP supporter and Hindutva campaigner Sabyasachi Bhattacharya, who argued that the coinage had a linguistic mistake that actually ends up describing Modi and Shah as ‘sur‘, meaning god. Therefore Banerjee, as slayer of gods, becomes a demon herself, argued Bhattacharya.

The popularity of the coinage has escalated nonetheless.

This, however, is neither the first time that TMC supporters have tried to portray Banerjee as Durga, nor is this the only instance this year.

Also read: How Cult Worship Drove Us Into Crisis

At the end of August, a club organising a community Durga Puja at the Baguiati area in eastern Kolkata that has MLA Madan Mitra as one of its patrons announced the decision to create a statue of the chief minister that would share space with the Durga idol in the pandal. When the news broke early in September, the statue was nearing completion.

Responding to the news, the BJP’s national ‘IT cell’ chief and one of the party’s in-charges for Bengal, Amit Malviya, wrote on Twitter, “This deification of Mamata Banerjee, who has blood of innocent Bengalis on her hand, following the gruesome post poll violence in Bengal, is nauseating. This is an insult to goddess Durga. Mamata Banerjee must stop this. She is hurting the sensibilities of Hindus of Bengal.”

This deification of Mamata Banerjee, who has blood of innocent Bengalis on her hand, following the gruesome post poll violence in Bengal, is nauseating. This is an insult to goddess Durga. Mamata Banerjee must stop this. She is hurting the sensibilities of Hindus of Bengal. https://t.co/1px1OqsFWA

The BJP’s national vice president Dilip Ghosh and leader of the opposition, Suvendu Adhikari, also took sharp digs at Banerjee over this. But the ruffle was limited.

On October 3, once Banerjee’s victory – by a large margin – appeared imminent, Madan Mitra went to the place where Banerjee’s statue was being built and performed a ritual, chakshudaan, associated with Durga Puja where idol makers give a ceremonial finishing touch to their work by painting the eyes. Veteran Lok Sabha MP Saugata Roy stood next to Mitra. 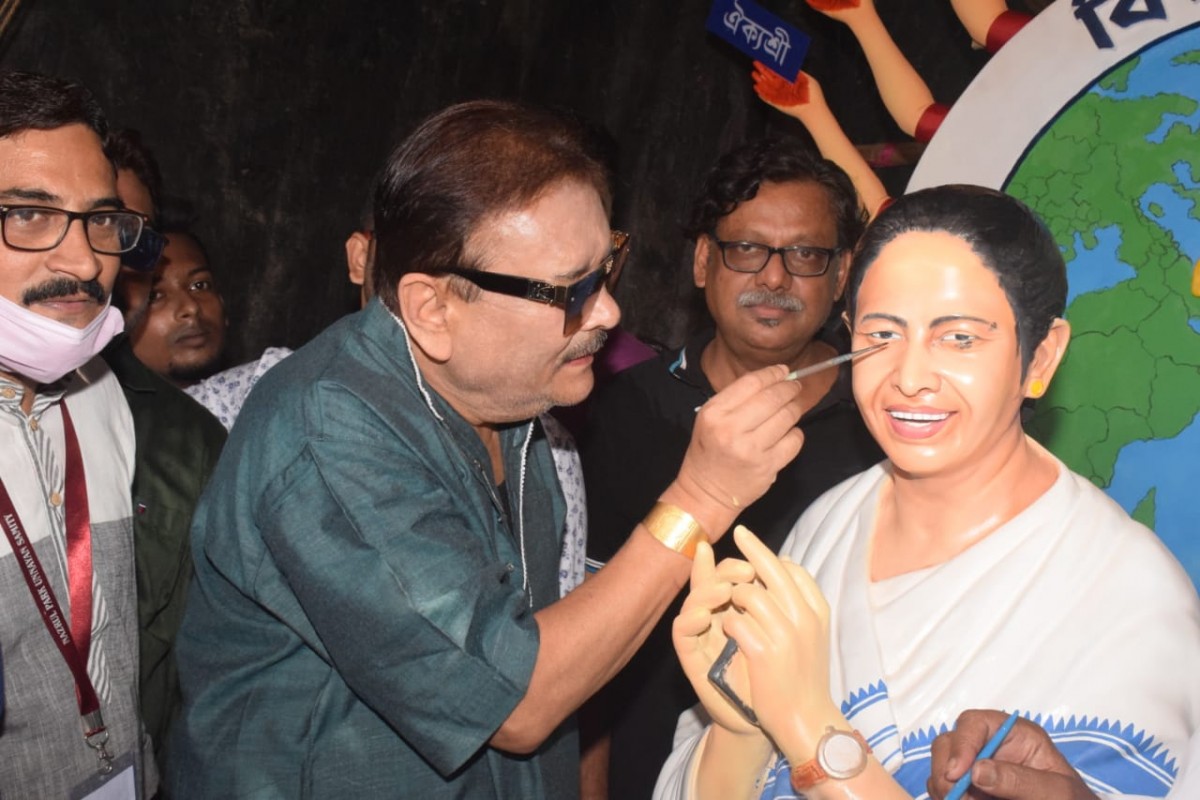 Incidentally, in the past, Banerjee herself has on a couple of occasions ceremoniously performed the chakshudaan of Durga idols in community pujas.

Her portrayal as the Durga was not limited to Kolkata. In the first week of September, the chief organiser of a community Puja in Diamond Harbour area of South 24-Parganas district, who is also the TMC’s block unit president, worshipped an idol of the chief minister on the occasion of Khnuti Pujo, an occasion marking the beginning of the preparations for the Puja. Arumoy Gayen, the organiser, said, “Mamata Banerjee is Durgatinashini and the BJP represent the asurs of the present day.”

In the second week of September, organisers of a Ganesh Puja in Malda district triggered controversy after the Ganesh idol appeared in the arms of a ten-armed depiction of Mamata Banerjee. The 10 arms held placards with names of the chief minister’s 10 pet projects written on them.

Only three weeks ago, Bengal urban development minister and the chairman of the board of administrators of the Kolkata Municipal Corporation, Firhad Hakim, said, “Mamata-rupen sansthita” while chanting the Sanskrit mantra associated with invoking the goddess.

This irked the BJP, whose leaders and supporters accused Hakim of hurting Hindu sentiment. Tarunjyoti Tewari, an advocate and a Bengal BJP spokesperson, lodged a complaint with the police. He wrote on Twitter, “A minister of WB Govt. @FirhadHakim insulted Maa Durga and Hindu Sentiment by chanting “Ya Devi Sarva-bhutesu, #Mamata Rupen Sansthita” – means Maa Durga is present as Mamata Banerjee here. It was done to hurt Hindu sentiment.”

In a leap of irony, Rajya Sabha MP Balbir Punj had described Mamata Banerjee as “sakshaat Durga” (‘Durga in person’) at a Rashtriya Swayamsevak Sangh (RSS) event in New Delhi in 2003.

TMC and BJP were in alliance at the time.

Politics and religion have long walked hand in hand in India, often stoking communal tension and polarisation. In Bengal, Subhas Chandra Bose had strongly criticised All India Hindu Mahasabha for bringing saffron-clad sadhus and sanyasins to the arena of  politics.

Bengal has suffered a Partition on communal lines, but since Independence, religion has remained largely out of Bengal politics.

This continued until 2008-2009 when the TMC on the one hand started addressing Muslims as a community and one the other made a concerted effort to ‘capture’ Durga Puja organising clubs.

Leaders of the Congress and later the TMC have for decades been associated with organising community Kali Puja and Durga Pujas. Meanwhile, Left parties would avoid direct involvement in organising pujas or any religious event, limiting themselves to selling Marxist literature in the streets crowded with revellers.

But the TMC, in a rather planned way, took control of a large number of community Durga pujas in Kolkata and the districts since the party’s 2009 Lok Sabha election success, when it emerged as the state’s single largest party and Banerjee became the railway minister in the UPA-II government. She emerged as the biggest star when it came to the inauguration of community Durga Pujas and, after becoming the chief minister, even designed the idol for a puja in Bhabanipur, in 2012. 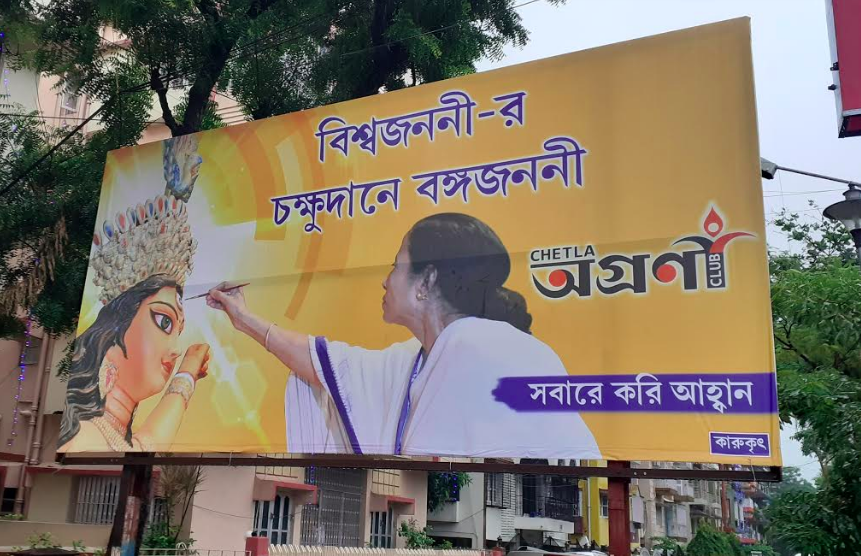 A banner showing CM Mamata Banerjee bringing an idol to ‘life’ by painting its eyes. The idol is part of the Chetla Agrani Club’s festivities, which are organised by Kolkata mayor Firhad Hakim. Photo: Tapati Guha Thakurta

The high demand for her to inaugurate pujas forced organisers to push the inauguration dates well ahead of the actual festival. In 2018-19, the BJP’s state unit president Dilip Ghosh took sharp digs at the practice of inaugurating pujas so many days before the actual festival, arguing that it was an “insult to the act of worship.” TMC and Banerjee paid little heed and even this year, Banerjee has started inaugurating community Pujas from the evening of Mahalaya itself.

The depiction of Banerjee as Durga first happened in 2016, when the Prantik Club in Chakdah area of Nadia district created an idol imitating Banerjee, highlighting her 10 pet social welfare projects in her 10 hands. Stray incidents of TMC leaders comparing her with Durga also made sporadic news. For example, a giant cut-out depicting a 10-armed Banerjee was seen near the venue of the TMC’s January 19, 2019, rally in Kolkata’s Brigade Parade Ground from which Banerjee attempted to launch an United opposition platform challenging the Modi government – an initiative that did not materialise.

Now that the TMC has revived its mission of forging an opposition alliance to take on BJP in time for the 2024 Lok Sabha elections, instances of Banerjee’s portrayal as Durga have been unprecedented.

Speaking to The Wire, TMC MLA Madan Mitra who did the ceremonial chakshudaan mentioned earlier in the article, said, “Who’s Devi? She is the destroyer of the roughest evil. In present times, who but Modi and Shah are the biggest evils and who other than Mamata Banerjee can defeat them?”

Also read: This Year, the Prospect of a Humble Durga Puja Is an Opportunity Lost for Mamata Banerjee

Historian Tanika Sarkar said that even though the tendency of deifying popular personalities who have made major achievements is not a welcome practice as it imposes super-human qualities on an individual, it has been a common phenomenon in Indian politics and culture. “Indira Gandhi was hailed as Durga. If the person is male, he becomes an Avatar of Vishnu and Ram,” she said.

Veteran Bengali journalist and columnist Suvashis Maitra echoed her. “In 1971, Atal Bihari Vajpayee had referred to Indira Gandhi as Durga,” he said.

“On the last day of the Constituent Assembly debate, B.R. Ambedkar had cautioned India against the personality cult but it continues to be a dominant character in our politics and culture,” Maitra said.

Academic Proma Ray Chaudhury, in a research paper published by the Cambridge University Press last September, titled ‘The Political Asceticism of Mamata Banerjee: Female Populist Leadership in Contemporary India,’ took note of the phenomenon that “Banerjee is often more directly revered as an incarnation of the Hindu warrior goddess Durga by her followers and supporters.”

She wrote, “While Banerjee’s status as a single woman and her self-fashioning as an apolitical leader of the people with an austere personal lifestyle characterise her performance of political asceticism, her cultivated persona of a “street fighter” as well as a nurturing Didi and an embodiment of the Mother Goddess mark her negotiations with the demands of hegemonic masculinity and femininity in the performance of her populist leadership.”