Through Bharat Jodo Yatra, the Congress Must Articulate an Alternative Political Vision

The Congress, and more so Rahul Gandhi, has taken on Narendra Modi and the BJP through fierce criticism of the government policies. What we need is a step beyond, of a promising alternative political vision to the BJP. The time for symbolism is over; the time for action is now. The Bharat Jodo Yatra slated to begin on September 7 and led by Rahul Gandhi overflows with significance, evoking memories of writings on the Salt Satyagraha led by Mahatma Gandhi.

Rahul is perhaps the only politician who has dared to take on Modi’s India sharply and perceptively. The problem is that his concentrated attack on the BJP about the proximity of party leaders to the owners of capital, their complete indifference to the many problems that beset the country such as unemployment, the hijacking of institutions, the suspension of civil liberties, and above all, the sheer ugliness of the political discourse has begun to pale through repetition.

I write this even as I appreciate the need for a constant critique of the government. But political practices cannot stop at critiques, they have to present to us an alternative vision of what India should be. The party has to state its stand, clarify where it speaks from, detail who it speaks for, and tell us why it speaks at all. There is a need to tell people not only where the Congress comes from, but what it has in store for a society that has been wracked by mutual suspicion, by vigilantism, by hatred, by violence, and by lack of effective governance. We need a vision statement.

A good place to start is the agitation against Citizenship Amendment Act. Our young people who came together in thousands against a poisonous law taught us that the crying need of the day is azaadi.

Azaadi heralds freedom from malnutrition and unemployment, freedom from insecurity, freedom from irresponsible type-casting if we dare question people in power, and freedom from an amoral and cynical media that uncritically toes the line drawn by the government. Azaadi is a powerful concept, it appeals to all. Tell us, leaders of the Congress, what stand your party will take on freedom, Purna Azaadi, if you come to power.

The other issue that the leaders of the party must address is what kind of a society we want to live in. Do we want a society in which officials spend their time counting Hindus and Muslims, much like the colonial masters did? Or do we want a society where people can live together as fellow citizens? We have to be wary of what communalism does to us.

The central theme of Agyeya’s poetic collection, titled Samanantar Saanp, is the tale of two interlocked serpents (competing communalism) that had caught Indians in their grip and spread their venom far and wide. Hatred oozed out of their eyes and people ran for cover because if they stopped they would die.

“Ham ek lamba saap hain/ jo badh raha ha aiththa khulta, sarakta, rengtha,/mein na sir hoon (aankh toh hoon hi nahi)/ dum bhi nai hoon/ aur na mein hoon daanth zehreele/ mein us saanp ki gunjlak mein uljha hua-sa/ek bekas jeev hoon/bagal se guzre chale tum ja rahe ho/sir jhukaye, peeth par gathri sambhale (I am a long snake, which moving forward flexes, constricts, opens out, slithers, and stings, I am not its head, nor am its eyes, nor its tail, and nor am I it’s poisonous teeth, I am helplessly caught in the coils of the snake. Nearby you pass with bowed heads, laden with bundles on your back).”

Most states were founded on violence, civil wars, wars of independence, and bloody coups. We have to come to terms with the fact that the post-colonial life of the largest democracy in the world was framed in splashes of blood. The Partition should have taught us that break-ups of countries are a tragedy. Violent ruptures between people who should have lived together as fellow citizens are a tragedy of epic proportions.

We seem to have misplaced the art of reaching out to people who might speak a different language and worship different gods, but who are quintessentially human like us. Looming like a shadow over the Indian sub-continent is a saga of loss, loss of workplace solidarity, loss of friendships, and loss of love forged despite taboos, loss of the art of compromise, and the anxiety and sorrow that these losses have bred. And now the Jodo Yatra (a rally for unity) has to ask the question – how many times will communalism partition hearts and minds? For how long? 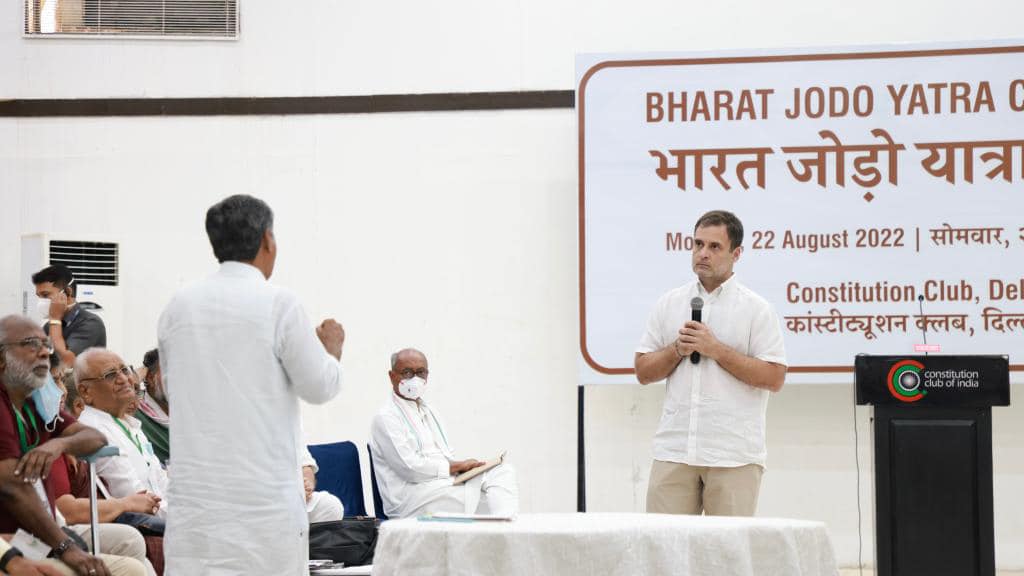 The Congress party should learn from its own history. In the aftermath of the Kanpur riots, the party established an inquiry commission to probe into the reasons for the violence. A small committee of prominent Congressmen – Purshottam Das Tandon, Khwaja Abdul Majid, T.A.K Sherwani, Zaraful Mulk, Pandit Sunderlal and Bhagwan Das – authored a report. It was a well-crafted nationalist statement on the history of Hindu-Muslim relations in India.

“Communal riots are an outcome,” the report argued, “of certain historical and social processes that have been sparked off by colonial rule.” The argument overturned the assumption, widely disseminated by the colonial government, that Hindu Muslim enmity is endemic to India.

Historians tell us that the pejorative term ‘communal’ was practically invented by the colonial government. The Indian National Congress uncritically accepted the term ‘communal’ but held that it was the British policy of divide-and-rule that was responsible for violence, loss of lives, and destruction that was a direct outcome of communal riots.

The official Congress position was that India was home to both Hindus and Muslims and that it was possible to put an end to the conflict. The minorities had to be sure that their rights to religion and culture would be given full protection in an independent India.

In the shadow of the 1931 Kanpur riot, the Congress party drafted the Karachi Resolution on Fundamental Rights. The Declaration emphasised the right to religion and the freedom to profess and practice any religion.

On March 31, 1931, Gandhi while moving the resolution on fundamental rights in the open session of the Congress at Karachi spoke on the issue.

“Though Islamic and Aryan cultures are not mutually exclusive.” he said, “we must recognise that Mussalmans look upon Islamic culture as distinctive from Aryan. Let us, therefore, cultivate tolerance. Religious neutrality is another important provision. Swaraj will favour Hinduism no more than Islam, nor Islam more than Hinduism. Let us from now on adopt the principle of state neutrality in our daily affairs. Can the leaders of the Congress reiterate this commitment during the yatra?”

Above all the leaders of the party have to uphold and prioritise the constitution. In the Constituent Assembly on November 25, 1948, Dr. Ambedkar had warned his colleagues and the country thus:

“[We] can only maintain democracy when we observe the warning that the Liberal philosopher John Stuart Mill had issued to all who are interested in the maintenance of democracy. People should not ‘lay their liberties at the feet of even a great man, or to trust him with powers which enable him to subvert their institutions. There is nothing wrong in being grateful to great men who have rendered life-long service to the country but there are limits to gratefulness. This is even more necessary in India.

For in India, Bhakti, or what may be called the path of devotion or hero-worship, plays a part in its politics unequalled in magnitude by the part it plays in the politics of any other country in the world. Bhakti in religion may be a road to the salvation of the soul. But in politics, Bhakti or hero-worship is a sure road to degradation and to eventual dictatorship. Dr Ambedkar’s warning was prescient, for Indians have revealed a troublesome propensity to hero-worship leaders they see as strong and decisive. The only alternative is fidelity to the Constitution.”

The constitution is usually viewed as a legal document, and therefore, as the monopoly of jurists.  There is, arguably, something more to the Indian constitution than the codification of law and legal entitlements of citizens. It is a deeply political manifesto.

As the product of the history of the freedom movement, the constitution provides a normative frame for thinking about politics and policies, and for reflecting on the state as well as the citizens of India. It constantly reminds us of the philosophical distinction between ‘what is’ and what ‘should be’.

It depends also on the people and on the political parties they elect. “It is, therefore, futile to pass any judgement upon the Constitution without reference to the part which the people and their parties are likely to play.”

Constitutional norms have been ignored, contested, mediated, or dispensed with by the ruling party. Yet the establishment of procedures for the regulation of the power of decision-making is politically prudent. It is more desirable than the prospect of purely arbitrary decisions taken by authoritarian rulers. That is why the constitution provides an evaluative criterion to judge the state of democracy in the country.

We do not get food from the charity of leaders who personalise constitutional obligations. The government is obliged to care for the well-being of its people. If it does not do so, every citizen should be able to say as the Red Queen of Hearts said in Alice in Wonderland “off with their heads”, speaking of course purely metaphorically.

There is a need for Congress to clarify its own vision of what the future can hold for the people organised under the three precepts of Azaadi, communal harmony and constitutionalism. In the space between these three ideals, the scriptwriters of the Congress manifesto can fill in the gaps. In the meanwhile, let us know what the broader vision of the party is. What do you stand for?