To those familiar with the state government's attempts to bury controversies, the term extension of a panel probing the Bhopal encounter is a sign that Shivraj Singh Chouhan does not want a proper investigation. 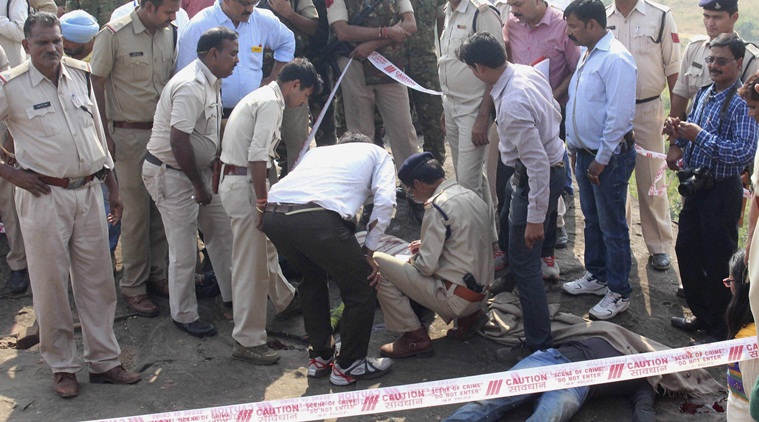 Bhopal: Police investigate the encounter site at the hillocks of Acharpura village after the STF killed 8 Students of Islamic Movement of India (SIMI) activists who escaped Central Jail killing a security guard in Bhopal on Monday. Credit: PTI

Bhopal: “Zinda hai, maaro” (He’s alive, shoot him). Three months after these damning words – shouted out by a policeman on a hilltop near Bhopal, and captured by an amateur videographer – helped fuel a national uproar, Madhya Pradesh chief minister Shivraj Singh Chouhan seems to be “managing” the scandal with chilling cynicism.

On Tuesday, the one-man judicial commission set up in November to probe the gunning down by the police of eight under-trials hours after their escape from the highly-fortified Bhopal central jail on the night of October 31, got its first extension, for six months.

For those who have watched the state government burying controversy after controversy by setting up commissions and extending their terms, this is one of several worrying signs that Chouhan – who extolled the killings in his Republic day address – does not want a proper investigation of the jailbreak and the deaths.

The commission, headed by retired high court judge S.K. Pandey, has been mandated to investigate, and fix responsibility, for the escape from jail by the eight men, allegedly members of the banned Students Islamic Movement of India (SIMI), and probe whether their killing was warranted. Amateur videos and a citizens’ fact-finding report have cast doubt on the official versions, leading to allegations that the deaths were staged by the police.

However, ever since it was announced, the commission has been in the news, not for its investigation of these serious charges, but for two other reasons: Pandey’s alleged connections to the RSS and the government’s over month-long delay in allotting the commission premises and staff. Lately, there has been a third reason: did a discontented Pandey try to quit last week?

Among those who spoke up against Pandey’s appointment was the state’s former advocate general Anand Mohan Mathur, who appealed to the chief minister to reconsider. “I have known Justice SK Pandey from the time he was a civil judge at Jabalpur. He is known to be a RSS sympathiser and, therefore, will not be a suitable person to conduct an impartial probe into such encounter,” he said in a letter to Chouhan shortly after Pandey’s name was announced in November. For his pains, the nonagenarian had cow dung hurled at him by over 200 right wing activists’ who gheraoed him at his home in Indore. They shouted slogans, calling him anti-national, and tried to blacken his face.

The tell-tale delay in giving the commission administrative support resulted in nearly half of its three-month term ending before it could actually begin functioning. Pandey is yet to visit the jail from which the undertrials allegedly escaped after killing a warder and over-powering a sentry. According to sources in the panel, the commission has so far received a 800-page document from the Bhopal police on the jailbreak and the subsequent killings. The jail department has also submitted its records on affidavit. However, autopsy reports are yet to be submitted and the cross examination of witnesses is yet to begin.

Meanwhile, the commission has recently been mired in an almost farcical controversy over whether or not Pandey had threatened to resign over not being provided a car, accommodation and other facilities. The local media reported that he left the Circuit House in Bhopal, where he was staying, to catch a bus for his home in Sagar on February 4, but was persuaded to return by government officers, including the chief minister’s principal secretary, S.K. Mishra and additional advocate general Pushpendra Kaurav. Pandey later said there had been some “confusion” and that he had not resigned. 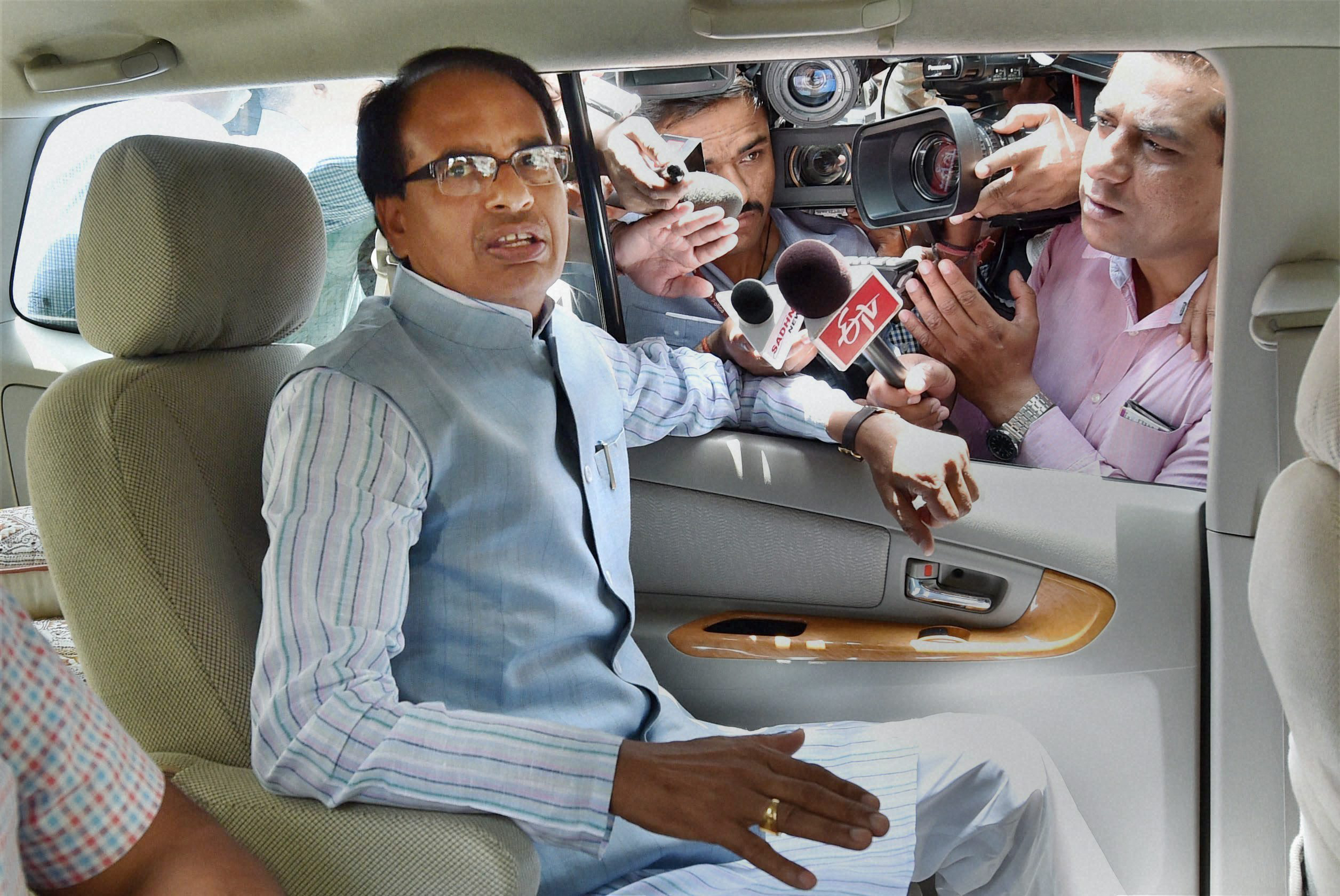 At this rate, the commission may well seek and get more extensions, like other commissions headed by retired judges set up from five to ten years ago that are still to submit their reports. However, even if the Pandey commission does end up submitting a report, there are question marks over whether it will even be made public. The Chouhan government is currently sitting on the reports of about a dozen judicial commissions. Among the reports gathering dust in sarkari cabinets is that of a commission set up in 2000 to investigate a controversial municipal election, another on the death of a tax official, a third on alleged irregularities related to the Sardar Sarovar project and one on a pension scam. There have been repeated demands, unheeded by the government, to make public and declare the actions taken by it on the report of the Justice S.L. Kochar inquiry commission, set up in 2010 to look into aspects of the leak of methyl isocyanate gas from the then Union Carbide factory, which killed thousands in 1984.

Lajja Shankar Hardenia, the convenor of social organisation National Secular Forum, bluntly declares the Pandey commission a sham. “The Commission of Judicial Inquiry Act is itself flawed as it does not enjoin upon the chief minister to make commission reports public,” he points out.

Chouhan announced the judicial probe into the encounter shortly after he publicly commended the killings and sought endorsement by a 10,000-strong crowd of party workers and sympathisers, who obligingly shouted Vande Mataram and Bharat Mata Ki Jai. His hand was apparently forced by amateur videos suggesting these were extra-judicial killings. A video seemed to show the police firing at close range at a man who was not retaliating. Contradictory statements by the state’s home minister, the Bhopal director general of police and the state Anti Terrorist Squad chief over whether the killed men were carrying arms added to the state government’s embarrassment.

Before ordering a judicial probe, the chief minister did try to silence critics by announcing three other probes in quick succession. However, when the families of the slain men and some public-spirited individuals moved the Madhya Pradesh high court to seek an independent probe, he quickly announced the setting up of the inquiry commission headed by Pandey. By then, the Jabalpur bench of the state high court had issued notices to the government seeking a report on the incident, as had the national and state human rights commissions.

Chouhan’s action was widely viewed as a move to pre-empt a possible inquiry into the incident by a sitting high court judge and it did, indeed, prove pre-emptive. The state high court cited the existence of the commission while rejecting a petition for an independent probe filed by Abdul Rashid, the brother of Abdul Majid, one of the eight suspected SIMI men killed in the encounter. With the notifying of the Pandey commission, the earlier probes ordered by Chouhan, by a magistrate, a retired director general of police and a special investigation team, became redundant.

Significantly, even after ordering a judicial probe, Chouhan has not stopped lauding the killings. He cited them as one of the state government’s top achievements and congratulated the police for them during his Republic Day address at Bhopal’s Lal Parade ground. Indeed, even as a fact-finding report by the Quill Foundation and the National Confederation of Human Rights Organisations has highlighted several inconsistencies in the official versions of both the alleged jailbreak and the police encounter, the ruling BJP and other affiliates of the Sangh Parivar have unabashedly celebrated the killings. The policemen involved in the operation have also been felicitated. When he was once asked why he called the slain men “dreaded terrorists” when the jail department had in its report merely described them as undertrials, Chouhan’s cryptic reply was, “It is a matter of perception”.