'They Were Meant to Protect Us. Instead They Killed Us': Thoothukudi Prepares to Vote

A year after police fired on protesters who were challenging Vedanta's Sterlite plant, bereaved and wounded families mull over voting as an alternative to despair. 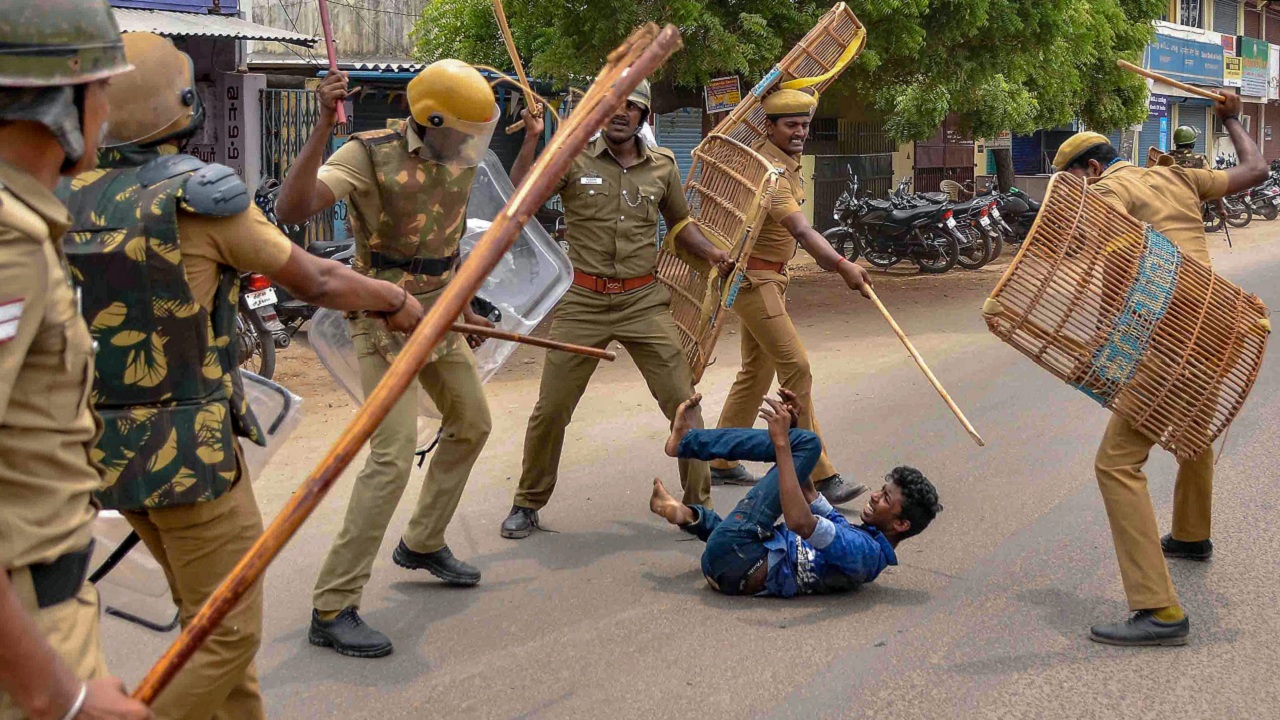 Thoothukudi: J. Snowlin would have cast her first vote this election. She would have turned 19 last October, and probably looked forward to the polls given her deep interest in things happening around her. 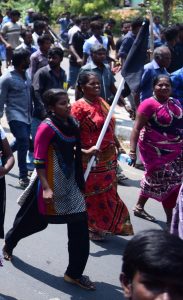 J. Snowlin carrying a black flag during the protest against the Sterlite plant. Credit: Special arrangement

Instead, when India elects its new national government next month, her family will have just observed Snowlin’s first death anniversary.

Snowlin was among the 13 people shot dead in Thoothukudi on May 22, 2018, after police open fired at a protest rally demanding the closure of Vedanta’s Sterlite Copper unit in the town.

Snowlin’s modest house at Mini Sahaya Puram in Thoothukudi is still haunted by her memory. Her eldest brother, J. Godwin – the only relative Snowlin would listen to – has a tattoo of her inked on his back. Her mother, J. Vanitha, is still grieving.

“At times I console myself saying it was perhaps the will of God. Snowlin was born after Sterlite was set up. She was perhaps destined to die protesting it. She has died for a cause,” she says.

“Other times I cannot console myself, and I just wish I could join her.” J. Godwin has a tattoo of Snowlin inked on his back. Credit: Kavitha Muralidharan

The family is not looking forward to the elections – certainly not in the absence of their daughter. “She would have been excited. She dragged us to the protest and made sure we were aware of it. In fact, her friends told me Snowlin was shot right into the mouth only after she told the policemen that she was protesting for them too,” her mother said.

Life has transformed for this small family since the young woman was killed. Snowlin’s 24-year-old brother, J. Magdon, has been employed in the District Collectorate, but he is neither pleased with the work or the salary it pays.

“We were promised jobs based on our educational qualification. I have finished my 12th standard but I have been given a job that requires the qualification of 5th standard. I get a salary of Rs 10,000 a month but if I go to sea, I can earn Rs 2,500-3,000 per day,” he says. “This government job means nothing to me.”

Vanitha does not agree with his speculation. “Going to sea is risky. I hope someday our luck will reverse – that he will land a better job than he has now.”

Also read: ‘In Thoothukudi, the Choice Before People Was to Die of Cancer or Bullets’

Despite their apparent lack of interest in elections, the family is planning to vote. “On the television recently, Modi said there were supporters of Pakistan even in India. We are in India, but why were we treated as enemies, as people living in Pakistan? All that a young girl like Snowlin wanted was to live in a town not polluted by industries. Is it too much to ask?” 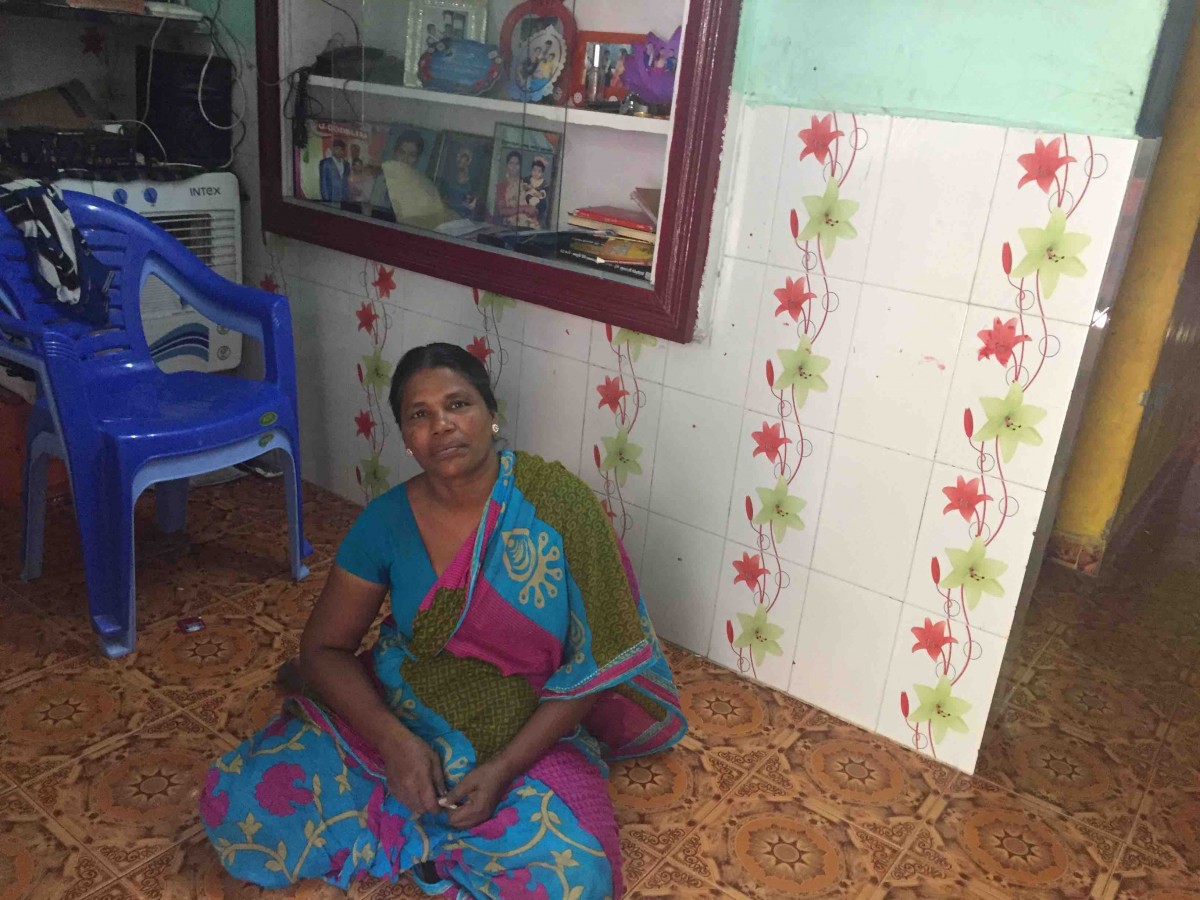 Vanitha minces no words about her anger with the government. “They were supposed to protect us. Instead they killed us. Voting is the only way I can show my anger against them.”

G. Sermaraj, 23, living in the town of Thoothukudi, is equally angry. But owing to the physical trauma he sustained in the police firing last May, he says he “doesn’t have the strength to walk to the polling booth and cast my vote”.

“Also, it is just not worth the effort.”

The bullet that passed through his leg has hit his life hard. “They gave me a compensation of Rs 5 lakhs. Most of it was spent on treating my leg. And I have not worked for the last year,” he says.

Also read: Who Threw That First Stone in Thoothukudi?

Sermaraj has been allotted a government job as a cooking assistant, which will fetch him a monthly income of Rs 13,000 – far less than what he had earned in a private company before the protest. “I have no option but to accept it,” he says. Mention the elections and Sermaraj sounds exhausted. “We have been let down by all political parties, more by some. I don’t think elections are going to bring about any change.”

This sentiment is echoed by 25-year-old M. Vijayakumar, a protestor shot in the thigh. Vijayakumar has undergone eight surgeries in ten months – in three hospitals across districts.

His family has spent well over the Rs 5 lakhs they received as compensation and clings on to feeble hopes. “Someday, I hope I can work like any other normal human being, but I don’t know when that is possible. Only then I can start working”.

Vijayakumar has been given a cooking job with a salary of Rs 11,000, which he too has no choice but to accept. “I don’t know if any company will give me a decent job given my physical disability now.” 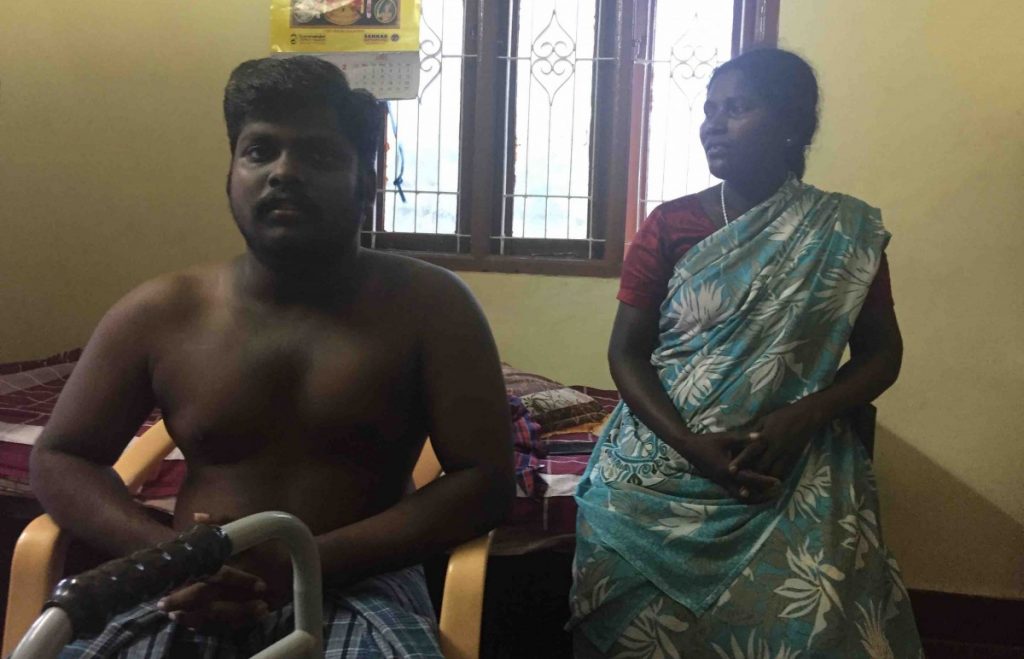 M. Vijayakumar got shot in the thigh and has undergone eight surgeries in ten months. Credit: Kavitha Muralidharan

Vijayakumar becomes outraged at the mention of elections. “All it would take is political will to close Sterlite. But obviously, it has not happened all these years. We don’t know if this closure is permanent. If Sterlite is reopened someday, any day, all my comrades would die another death.”

When asked whether he would rejoin the protest in the event of such reopening, Vijayakumar hesitates. “I will offer my solidarity to the protest if it happened, but I don’t think I will ever participate in one again,” he says, looking at his thigh. “They have rods to keep the bones in place – several of them. I will never be the same again.”