They Shoot Horses, Don't They?

Shaktiman, the mare whose leg was amputated after an assault by political activists, is a symbol of our broken republic – a permanent and searing reminder of the dark forces that now threaten to consume us and our possible futures. 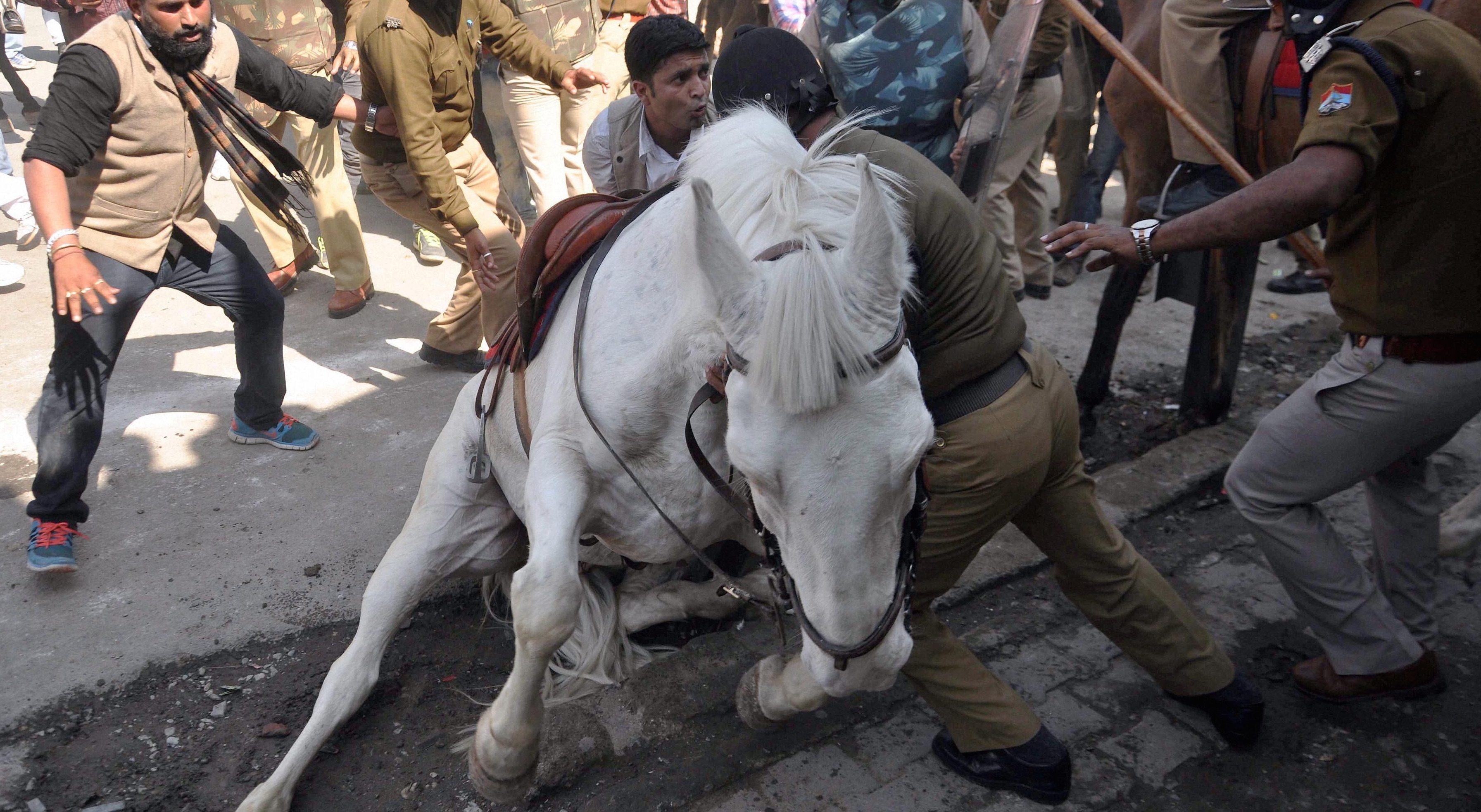 The police horse, Shaktiman, lies injured after BJP activists protesting the Uttarakhand government in Dehradun beat it with bamboo sticks and pulled it to the ground. Credit: PTI

Orwell’s great satire, Animal Farm, was inspired by the sight of a small boy mercilessly beating a great cart-horse. He was struck by the thought that if only the horse were to become conscious of its strength, that puny carter wouldn’t last too long: “…if only animals became aware of their strength we should have no power over them.”

It was a powerful insight, and flowered unforgettably in that hopeful moment in the 1940s when Orwell was moved by the prospect of the anti-fascist struggle becoming a popular democratic movement. The desired revolution would happen, as it were, painlessly – almost by osmosis. It was a magic moment, and Orwell has written memorably about its briefly glimpsed revolutionary possibilities. The fable was completed in somewhat changed circumstances – and the original vision of a people roused to a realisation of their invincible strength was transformed into one that told, again unforgettably, of the betrayal of those hopes and those possibilities, and of the restoration of the old, unjust order, albeit in a new guise. The pigs rule now – and in some versions, they wear black coats, and pretend to be lawyers.

I was reminded of this sequence by the shocking, heartbreaking footage of the BJP MLA, Ganesh Joshi, mercilessly wielding his lathi at a beautiful white horse as his party activists surged around. The great mare which we now know as Shaktiman, infinitely more graceful than the louts who set upon her, looks oddly placid, somewhat baffled by this violence – but still, distant and god-like – until she is, finally, felled by one last vicious assault.

The horse collapses – and the louts move on to their next victims. But before we turn to the meanings of this emblematic moment, let us step back a little to that other moment, when Kanhaiya Kumar was brought to the Patiala House courts in the custody of the police, if not quite under police guard. Because of course, the one thing that the police of B.S. “minor scuffle” Bassi failed to do was to guard their ward from the shocking violence which was meted out to him by so-called lawyers. They even boasted about it later – on tape, apparently – although it is unclear what there is to boast about in beating up a young, defenceless person who might even be naive enough to believe that the police were there to protect him. One of these black-coated blackguards, an activist with the BJP even offered this explanation for his shameful (and oddly, shameless) conduct: upon seeing Kanhaiya Kumar, meri desh-bhakti ubhar aayee (my nationalism burst forth).

So now we know. If there are any out there who are under any illusions as to the kind of people that we are dealing with – the kind of people who are coming out of the woodwork, emboldened by the installation of a regime that provides them with a practical, if not formal, immunity against legal deterrence –  there is now no room for doubt. We are dealing with serious psychopaths here. It makes not a jot of difference that this psychopathology enjoys a kind of collective respectability as being part of the Sangh parivar, or that its foot-soldiers wrap themselves in the national flag as they execute their dangerous designs – whether it is targeting respected professors in Karnataka, or baby-faced students in police custody or a humble blacksmith settling down to dinner in Dadri.

I am not so naive as to believe that these – or such – instances exhaust the range of violence that is on offer as part of our daily diet. There is Malda, and the chopped-up Hindu activists of Kerala, and … and … and of course, the big ones, 1984 and 2002. And don’t leave out the Kashmiri pandits, cruelly exiled from their homeland. But let me add, by the way, that from where I live, these instances of violence do not cancel each other out, as they seem to do in some weird way to the communal-minded. They add up. But even so, there is a crucial difference between violence that is perceived as violence, as something shameful, something that must be hidden, and even disavowed – and violence that is perceived as something sanctified, almost a form of patriotic duty, an affirmation of some perverted “nationalism”.

I suppose it says something about me – and I’m not even sure what it says! – but it is the sight of that broken horse that finally brings home to me the sheer grotesqueness of the cruel and violent ideology that is in the process of taking over our country. Ideology is misleading here – since it suggests some link with ideas – but what we are dealing with is a psychopathic mentality, a collective criminality which doesn’t become less criminal because it is widely shared. So, Shaktiman. Shaktiman recuperates after one of her legs is amputated. Credit: Special Arrangement

In the old days, there was no way of repairing a horse’s broken leg, and it was common practice – and even considered kind – to kill the horse. We seem to have made some small advance in veterinary science, since that beautiful great white horse is going to be allowed to live – but with an amputated leg. I propose that we adopt Shaktiman as a symbol of our broken republic – a permanent and searing reminder of the dark forces that now threaten to consume us and our possible futures.