The Unique Identity of Bengal Violence

Violence is endemic in all states across India. But in Bengal, all acts of violence are essentially political in nature. 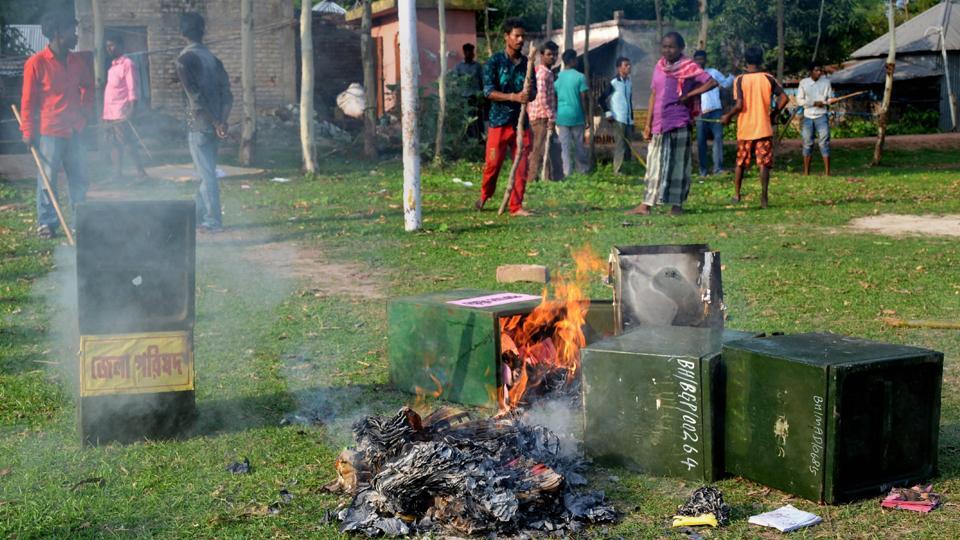 It is true that Bengal has had its fair share of such divine or pure violence. People burn ballot boxes during panchayat elections at Deotala in Malda district on May 14. Credit: PTI

The discourse on political violence as advanced by thinkers, administrators and politicians is indeed baffling. Even as the critics of violence are worried over the continuance and diversification of violence, they are unable to explain why people, states and nations have become so increasingly violent.

Walter Benjamin, who perished while fleeing the Nazis on the border of France and Spain in 1940, reportedly observed that the war of 1939 actually had its origins in earlier times, dating back to 1933. The people, however, were still not aware that all episodes of violence tend to have their genesis in the past. Benjamin cautioned that while we tend to recognise mythical violence without any ambivalence, the real danger lies in the violence generated by the executive. He used the term ‘pernicious’ to describe the violence sponsored by the executive and the administration.

We need to analyse the different faces of violence in Bengal in this larger context of violence. And we need to clarify what we mean when we characterise Bengal as a land ridden with violence. Let’s not forget that all states have their respective genealogies of violence, and their mythic forms exist alongside executive and administrative violence which routinely visit people. But it is violence in its mythic form, such as a war, which captures popular imagination; which makes us aware of its cataclysmic nature.

It is true that Bengal has had its fair share of such divine or pure violence. It is difficult to believe that Shah Shuja, the 17th century Bengal governor, son of Emperor Shah Jahan, had described Bengal as a fertile land of peace-loving, opium-consuming, idle villagers. The villagers, according to the governor, were loath to working hard because they could grow abundant crops with minimum amount of ploughing.

Yet, within a century, Shah Shuja’s portrayal of Bengal as a peaceful state was shattered as famines, deaths, and violence savaged the state in 1770. W.W. Hunter, a colonial officer, immortalised Bengal’s plight in The Annals of Rural Bengal, which he wrote in 1865.

Hunter quoted verses from John Shore, an officer of the East India Company who served as Bengal’s governor general between 1793 and 1797:

Still fresh in memory’s eye the scene I view,

Cries of despair and agonising moans,

Hark to the jackal’s yell and vulture’s cry,

The dog’s fell howl, as midst the glare of the day

They riot unmolested on their prey!

Dire scenes of horror, which no one can trace,

Around the same time, the novelist Bankim Chandra, in his novel Anadamath, wrote about the violence that was triggered by the famine. Understanding how people tend to remember or recall such episodes of violence is important in understanding the history of violence and the multiple layers within that narrative.

During the famine that took place between 1870 and 1880, litterateurs and administrators recalled the earlier famine that ravaged the land a century ago in 1770. But the linkages among famine, violence, and memory did not end here.

Seventy years on, Bengal found itself in the throes of yet another cataclysmic famine – which since has come to be known as the 1943 Bengal Famine. Three years later, unprecedented communal violence erupted across Kolkata. Significantly, intellectuals and administrators in 1943 barely recognised the palpable violence that was gestating underneath the famine-stricken land – the violence that in no small measure contributed to the Great Calcutta Killings of August 1946. The killings, unfortunately, were projected as sudden upheavals — divine retribution, as it were.

Such projections befuddle the idea of ‘violence’ in normal times, or, to put differently, the idea of ‘normal violence’. Normal violence is administrative violence, delivered within the framework of law. We tend to overlook or underplay the everyday violence in our life. It is only when confronted with unprecedented scales of violence – a strike of divine retribution – that we wake up to the presence of violence.

Thus the Bengal Famine of 1943 in which an estimated 3 million people died did not appear as a violent episode, while the Great Calcutta Killings in 1946, were identified as markers of violence.

Bengal was indeed once the peaceful land prince Shuja had believed it to be. But colonisation jolted the foundations of the state. During the long years of colonial rule, Bengal remained a violent land dotted with numerous bloody revolts alongside struggles for land rights, famines, police torture and burning of women on husbands’ pyres.

Kolkata, then known as Calcutta, became as violent a city as Mumbai was known to be in the latter half of the 20th century. Beginning in the 19th century, as a flourishing site of slave trade and transportation of coolies abroad, followed by gang warfare, opium trade, and murders along banks of rivers, urban violence in the course of time overwhelmed rural violence. Street violence and urban warfare, an integral part of post-Partition Bengal’s history between1950 and 1970, were consequences of such economic and social processes. The street fighters came from the ranks of lower classes and dispossessed refugees. And the police were trained by their colonial masters to tackle the restless streets, which were as much a site of gang warfare and communal violence as they were of protests. Street violence was remarkable not so much because of the number of casualties. But because of its pure nature, uncontaminated by conflicts of caste, language or religion. 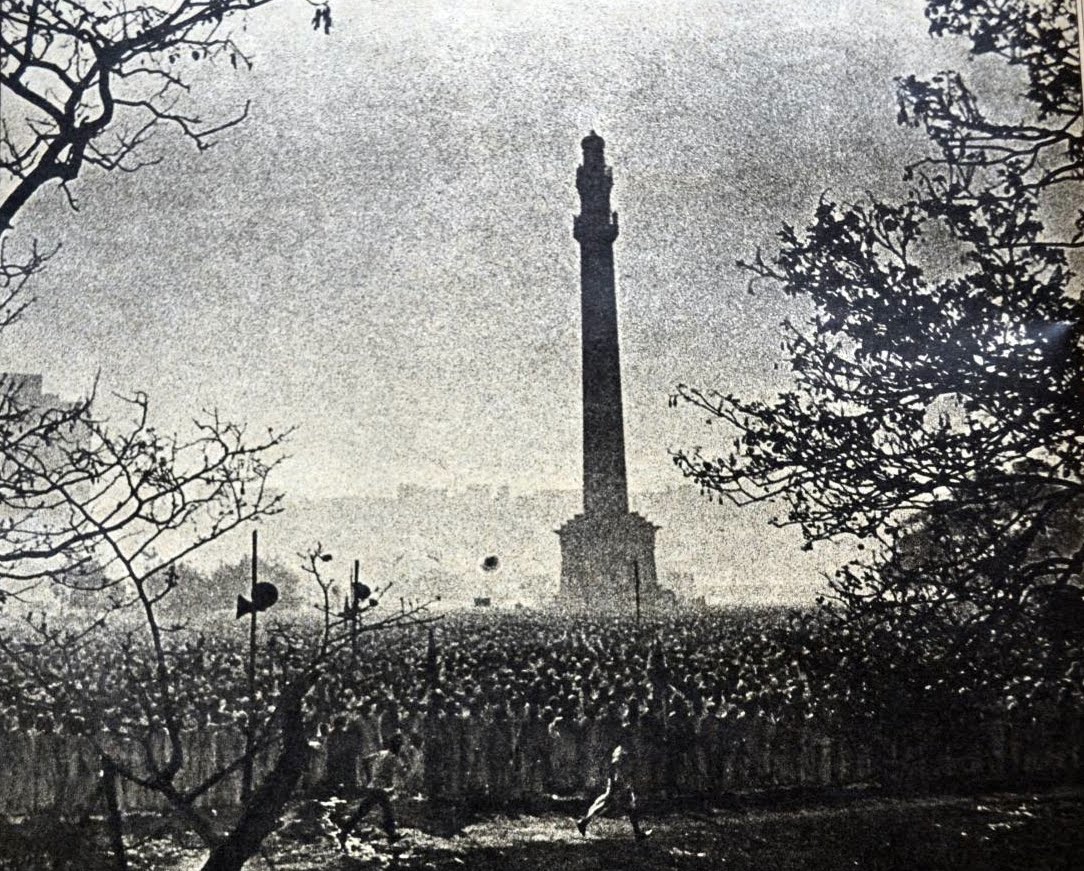 View of a rally in Calcutta in support of the peasant uprising of Naxalbari, 1967.

Analysts and Bengal watchers often wonder at the lack or even absence of caste-based violence in Bengal. It is not that caste discrimination did not or does not exist in Bengal or that it does not generate violence against people from lower castes. What needs to be understood is that in Bengal, all forms of social violence seem to have been subsumed in political violence.

The Naxalite decade (1967-1977), as it is popularly known, while claiming thousands of lives, epitomised Bengal’s changing face of violence. The movement subsumed all other forms of violence generated by caste, gender and religion.

Following the ascendancy of the Left Front government in 1977, the form of violence once again mutated and transformed itself into everyday routine violence.

The changing face of violence

One can therefore argue that, like the face of protest and rebellion changes over time, so too does the face of violence. The violence one encountered in Bengal during the colonial regime changed its form in the post-Independence period. Violence in this period manifested in street warfare and strengthening of mafia economy, with extortions and informal taxes increasing. Another contributing factor to this changed form of violence was a particular kind of development model that started taking shape in this period – the model that saw various rent-seeking groups resort to extreme violence in extracting income from land development and construction industry.

Let’s consider some aspects of street violence Bengal witnessed during this period. The infamous murders of Vinod Mehta – a police officer – and Idris Ali – a gangster – in Kolkata during the 1980s and the 1990s are just some of such incidents. Yet, the scale of violence in this state has been much less compared that of, for instance, Uttar Pradesh, whether it was violence directed by police to eliminate gangsters or the kind of violence that one saw in Bihar’s Bhagalpur blinding case where the state police blinded 31 undertrial convicts by pouring acid into their eyes. Known as the ‘Bhagalpur blindings’, the case made history in criminal jurisprudence by becoming the first in which the Supreme Court ordered compensation for violation of basic human rights.

During the Left Front regime, the cataclysmic violence lessened and political violence became ‘normal’. Or to put it differently, what we can describe as violence became banal. We can recall here the words of the political theorist Hannah Arendt about the ‘banality of evil’ – in this case the banality of violence.

Political killings continued unabated during the Left Front’s 34 year rule. The scale of violence may have reduced now, but the police and para-military personnel are still standing guard over the people in conflict and tension prone regions like Jangalmahal.

There is only one exception where, unfortunately, social violence has not become political. And that is gender violence.

Finally, I argue that no state experiences the same kind of violence throughout its history. No land escapes the problematic linkage between social and political violence. Therefore, to suggest that Bengal is a state more violent than others points towards a lack of rigour in understanding the nature of violence in general. This laxity allows us to condemn violence without being specific, and to not acknowledge that violence can become the organising principle of politics in a society, where social violence can continue unrecognised. Bengal illustrates this point better than any other state in India.