The Political Life of Kodiyeri Balakrishnan, Who Stepped Down as CPI(M) Kerala Secretary

Sixty-seven-year-old Balakrishnan took over as state secretary from Pinarayi Vijayan in 2015, during the Alappuzha party congress, and has now been in charge for nearly two terms. 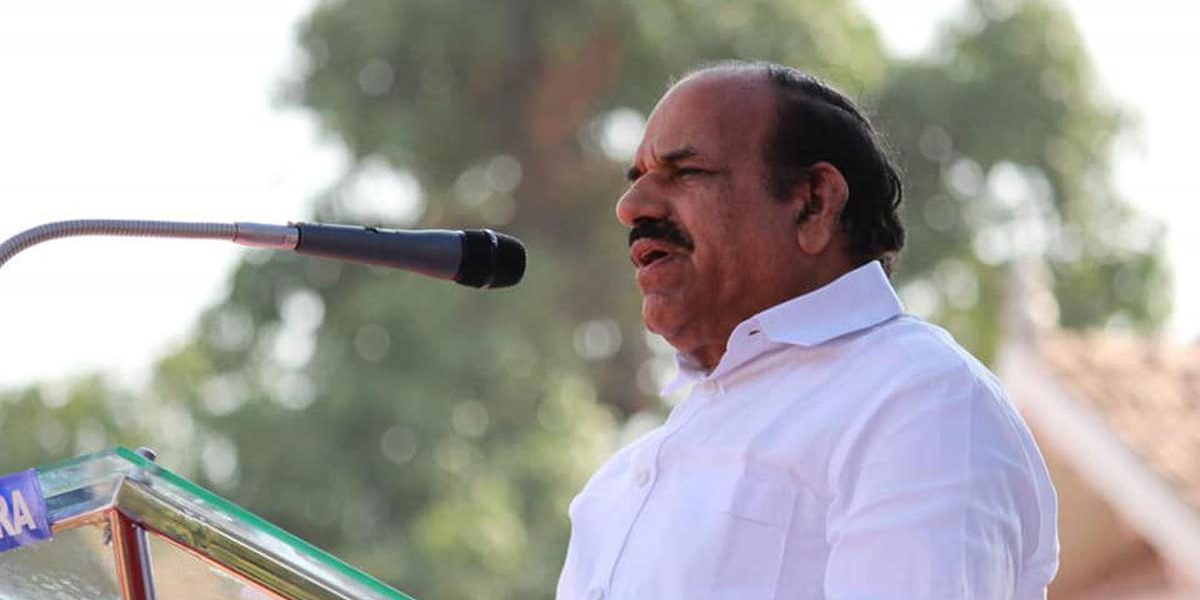 With local body elections in Kerala scheduled for December and assembly elections for May 2021, the Communist Party of India (Marxist) in the state has decided on a change of guard, resulting in Kodiyeri Balakrishnan stepping down as state secretary. The move is being seen as a face-saving exercise, with party cadres continuing to raise the issue of different yardsticks applied for different individuals in branch, local and area committees of the party.

Although the possibility of Balakrishnan stepping down was debated in the CPI(M) State Secretariat earlier, it was ruled out at that stage to not give the impression that the move was directly related to the arrest of Balakrishnan’s son Bineesh Kodiyeri, on serious charges including funding of a drug racket. Instead, the move has been dubbed as necessitated by medical reasons, despite the fact that Balakrishnan never stood down while undergoing cancer treatment in the US and during his recovery phase last year.

In the CPI(M)’s scheme of things, the leaders have a vicarious liability for the actions of family members and the 2009 Central Committee ‘rectification document’ clearly states how leaders should ensure that they don’t use power to amass wealth for themselves or their families. In Balakrishnan’s case, he was living in Bineesh’s house of late, and his public disavowal of his son didn’t cut ice with anyone.

Balakrishnan’s replacement is incumbent Left Democratic Front (LDF) convener A. Vijayaraghavan, who has been given the additional charge as state secretary, giving the impression of being a stop-gap arrangement. It is possible that he will be replaced with Balakrishnan himself ahead of the state party congress scheduled for late 2021, most likely as the fall guy if the LDF loses power in the assembly election. Balakrishnan continues to enjoy the backing of chief minister Pinarayi Vijayan, and it would be inconceivable for the all-powerful Kannur lobby to not have one of their own in the position in the longer term.

In fact, Vijayaraghavan’s appointment over the likes of front-runner M.V. Govindan has been interpreted in many ways, as also his not being a native of Kannur. In the CPI(M), since its formation in 1964, only V.S. Achuthananthan (discounting EMS stepping in briefly in 1970) among the state secretaries has hailed from outside Kannur till date.

Sixty-seven-year-old Balakrishnan took over as state secretary from Vijayan in 2015, during the Alappuzha party congress, and has now been in charge for nearly two terms. If this Kannur precedent were to be the deciding factor, and if Balakrishnan is denied another term, E.P. Jayarajan and Govindan will be frontrunners for the position at the next party congress in 2021. Politburo member M.A. Baby will also be an odds-on-favourite, despite his not-so-good equation with Vijayan, strictly going by party hierarchy.

That same year, Balakrishnan married the daughter of then Thalassery MLA M.V. Rajagopalan, who made way for his son-in-law in the ensuing 1982 assembly elections that paved the way for Balakrishnan’s quick rise. Following the exit of their mentor and Kannur strongman M.V. Raghavan on the issue of alternate document in 1986, and the elevation of then Kannur secretary Chadayan Govindan to the State Secretariat the same year, Balakrishnan worked closely with the new Kannur secretary, Vijayan.

Since power flows from Kannur in the CPI(M), this jumping of queue in 1990 saw Balakrishnan emerging as the deputy leader of CPI(M) in 2001 and becoming the state home minister under V.S. Achuthananthan in 2006, eventually seeing him take over as state secretary in 2015 from Vijayan.

Before Achutahanthan, who took over as state secretary from E.K. Nayanar in 1980, CPI(M) used to have a designated joint secretary to assist the state secretary. In 1964, when C.H. Kanaran was elected the state secretary following the formation of the party, Azhikodan Raghavan was joint secretary, which he passed on to Nayanar in 1967 following his nomination as Left Front convenor. So, when the ailing Kanaran passed away in 1972, soon after the political murder of comrade-in-arms Azhikodan Raghavan by the cadres of Bolshevik Party (formed under the leadership of veteran Marxist K.P.R. Gopalan, who took to Naxalism soon after his stint as CPI(M) Kannur district secretary came to an end in 1968), Nayanar took over by virtue of him being the joint secretary.

Incidentally, Kanaran’s term (1964-1972) had also seen him briefly stepping down in 1968 when a split in the CPI(M) looked imminent in the wake of the exit of large number of party cadres and leaders to the Naxalite movement under K.P.R. Gopalan. A.K. Gopalan (AKG) stepped in to occupy the state secretary’s position back then to try and unify the party and prevent further attrition.

Coming back to A. Vijayaraghavan, his elevation as SFI national president in 1986 came under curious circumstances, so as to prevent the elevation of C.P. John (now with the Congress-led United Democratic Front) as president, who had served as vice-president under M.A. Baby and Sitaram Yechury. Vijayaraghavan was elected to the Lok Sabha in 1989 from Palakkad defeating his namesake, V.S. Vijayaraghavan of Congress, the only election he has won till date. During his two stints in the Rajya Sabha and later as general secretary of the All India Agricultural Workers Union, Vijayaraghavan’s base has been the Vithalbhai Patel House in New Delhi, till he was named LDF convenor in 2018 to replace the ageing Vaikom Vishwan.

It is big shoes to fill for someone who wasn’t even part of the CPI(M) State Secretariat until recently, and someone who is often prone to a slip of the tongue, Freudian or otherwise. Vijayaraghavan doesn’t even have a designated party flat assigned to him till date, having to share his accommodation with M.V. Govindan. The CPI(M)’s elaborate party machinery functions out of the AKG flat complex, bang outside the AKG Centre (party headquarters) in the heart of Thiruvananthapuram, where the party’s State Secretariat members reside with their families, although cabinet ministers and the chief minister occupy ministerial bungalows when the party comes to power.

Vijayaraghavan’s appointment has also come under criticism as someone who hasn’t had a great track record in the past two years as LDF convenor. His double entendre-laden misogynist remark against Remya Haridas, the Congress candidate from Palakkad, a Dalit, is supposed to have been a contributing factor in her massive win in the Marxist bastion of Palakkad in the 2019 general election. Whether he can rise to the occasion with back-to-back elections on the anvil remains to be seen.

Vijayaraghavan is likely to follow in the footsteps of Balakrishnan, who positioned himself as Vijayan’s rubber stamp, unlike many of his illustrious predecessors who had exerted control over the party’s chief minister and ministers from time to time. Vijayaraghavan had long been the voice of Vijayan in the CPI(M) Central Committee, during the long-drawn factional feud between Achuthananthan and Vijayan.

Despite lowering the prestige of the position of state secretary, Kodiyeri Balakrishnan was, however, successful in coordinating the party affairs with the chief minister smoothly, ensuring that the party and the government was on the same page. He was also the yin to Vijayan’s yang, complementing the rough-and-tough Vijayan with his outwardly-democratic approach. In that sense, Balakrishnan’s five-year term can be assessed as successful, despite the loss of image suffered by the party on account of the shenanigans of his adult sons.

In fact, Bineesh Kodiyeri’s name had attained notoriety even before Balakrishnan took over as home minister in 2006, when he flung petrol bombs at the police in 2001 as part of an SFI protest during chief minister A.K. Antony’s tenure, and attacking the Nanthavanam Armed Reserve Camp in 2003 to free four of his fellow SFI comrades. When he was picked up by the police, Balakrishnan had himself come to forcefully free his son from their clutches in full public view. All these cases were conveniently written off when Balakrishnan became the state home minister.

The controversies surrounding his elder son Binoy, who is accused of siring an illegitimate son in Mumbai apart from a string of financial malpractices, had barely died down when Bineesh’s name cropped up in the gold-smuggling scam. It was becoming difficult for the CPI(M) to explain how the state secretary, who couldn’t pass on communist ideals to his sons, would manage to command the respect of his flock.

The CPI(M) might have doused the controversy surrounding Bineesh with Balakrishnan having to step down, but the party is facing an uphill perception battle following the eruption of the gold-smuggling scam and is up against the wall in the ensuing elections.