The Pathology of a Ceremonial Society

The measure of the writer is the terror she inspires in the ceremonial orders of power. 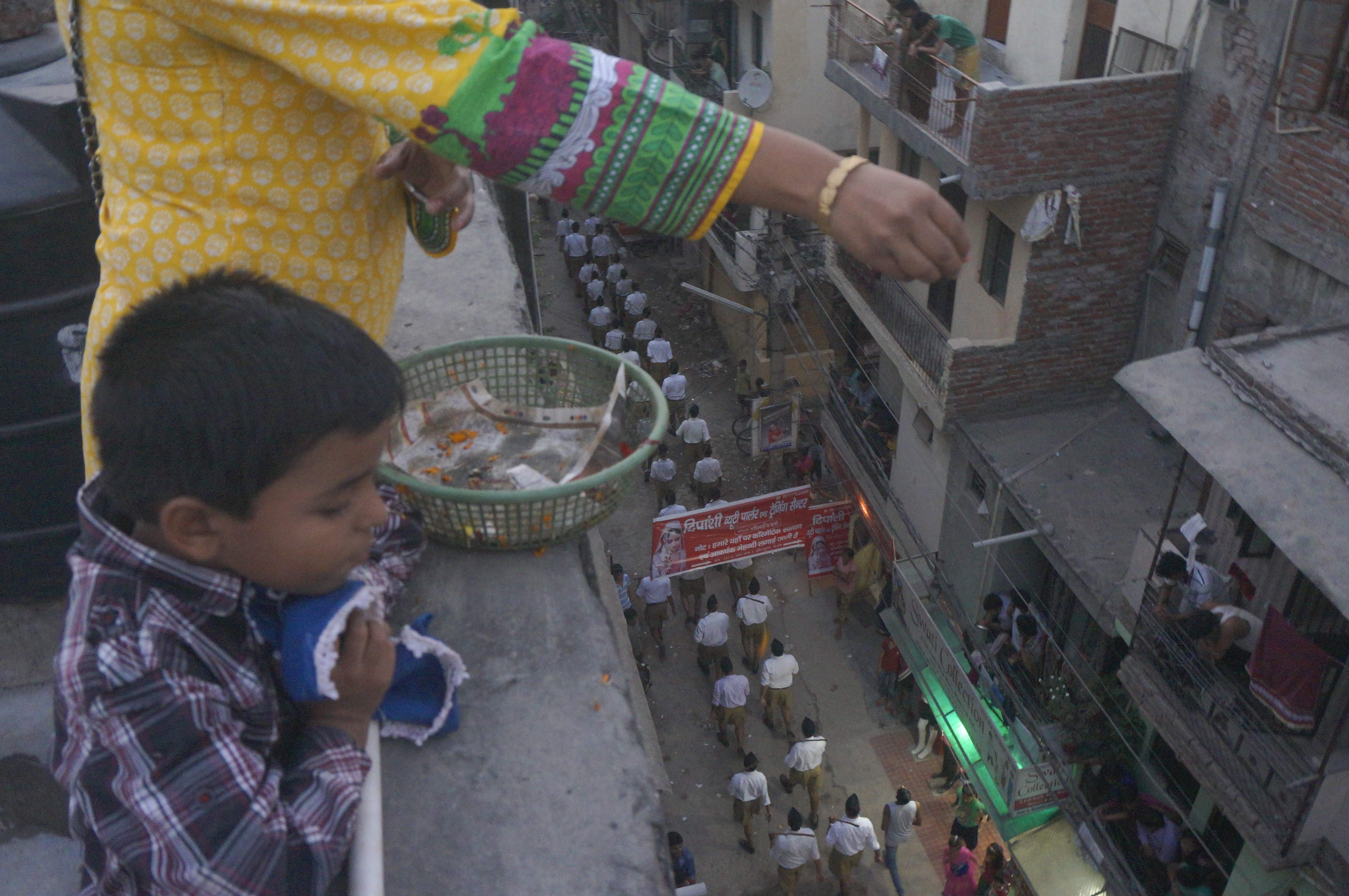 Ceremonies have a certain morbidity – as events that are not open to debate. An annual ceremony this year repeats the ceremony of the previous year, which repeated that of the year before, and so on. Any deviation would be disrespectful to the original event which the ceremony commemorates. Likewise with magical utterances or mantras, deviation would draw supernatural punishments. A purely ceremonial society, where each day is a faithful repetition of the days gone by, is called primitive – a theoretical ideal for ethnology. A primitive society has no need for history books. Gandhi himself preferred a certain form of ceremonial society which he called ‘village swaraj’. He contrasted the permanence of the villages of the subcontinent with the achievements of the ancient Greeks and the Romans—“Such ephemeral civilisations have often come and gone and will continue to do so”.

In being a ceremony in itself, a primitive society does not need quotation marks. We use quotation marks to set off an older statement from a new one. We quote in order to distance ourselves from the statements and traditions of the past – these punctuation marks are an institution which sets off the past from the future.

Modernity conceived itself as a progressive distancing from primitive societies. It created institutions – copyright, the university, refereed journals – to safeguard the ideal of a surge towards the future. This vision is also reflected in the academic norm of limiting the amount of quoted material permitted in a book, and the vigilance against plagiarism. Without the use of quotes there is no recognition of the new statements. Without the new statements there can be no meaning for quotes. Modernity is the game of finding the ideal ratio between the past and the future separated by quotation marks.

We write, therefore we are

For this reason, the writer is the heroic figure of modernity. The act of writing involves a certain aggression that rushes towards the unknown and the unwritten, and creates new statements. The writer’s new statements maintain the ratio between the past and the future such that we live with a sense of history. Without the writer, we will have slipped into a society in which there are only quotes, or a society that merely recalls and repeats. The writer is also a revolutionary in language. Revolution is the modern theatre of politics where a cut with the past is made in a single event. Hence, modernity was also obsessed with scientific, literary and philosophical revolutions.

Quotes are quite complex in their deployment. We quote in many ways, such as by prefacing what we speak with “as said by”, “allegedly”, “in the interest of neutrality”, “it is believed by some that”. The academic uses quotes to mention that statement from which she secedes in the history of that discipline. She deploys quotes to gather thoughts, often separated by centuries, and the differences between these thoughts, into a corpus for the free thinking animal that we are.

No one in religious institutions would preface their ceremonial chants with “allegedly” or “it is debatable”. If, in the ceremonial colony of the Germany of 1939, a man were to say that Czechoslovakia is not a part of Germany it would have been seditious. If he shouted “Czechoslovakia is a part of Germany” while winking or drawing quotation marks in the air with his index fingers, he would have quoted academically and earned a ticket to a camp. The quote marks would make the statement secede from its ceremoniality and ritual power. The pure recitation of the past is ceremonial. This is what is currently being demanded of the great international Sanskrit scholars Wendy Doniger, Michael Witzel, and Sheldon Pollock by the clergy of the subcontinent where the rationalists M. M. Kalburgi, Govind Pansare and Narendra Dabholkar have been killed for this. Obedient recitation rather than academic citation.

Let us imagine a time without writers. All that we write and speak are quotes: restricted to the same set of permissible and unburned books, mandatory slogans, and the drill. Bereft of the aggressive use of language to lure in the future, quotation marks will become redundant. The same number of statements – whether they are in quotes or not will make no difference anymore – will repeat. There will be no new novels written, no breakthroughs in science. This will be the end of our politics, sciences, and the arts. We will no longer refer to a past and project a future. Guns, tanks, and khaki shorts are going to be the only difference we will then have with the primitive societies, from which this coming society will in all other respects be indiscernible.

The right to remain silent

When new statements are suppressed by being declared seditious, the potentiality of language secedes from us. In India, we are now beginning a fight for our right to not speak the words that are against our conscience, such as declaring our allegiance through slogans and songs for a fair skinned upper caste housewife swathed in silk and gold, who loves to straddle wildlife, and lusts for real estate all the way from Iran to Philippines.

In 2008 “the assailants chanted […]” before a nun was raped in Kandhamal. When Kanhaiya Kumar suffered custodial beating it was apparently to force him to speak the words that were not his own “We thrashed him for three hours and we also forced him to say […]”. If the thugs who boasted about this incident spoke the truth, then, the machinery of the state will have been an accomplice to compelled speech. When it was said “an amendment should be made in the law so that everyone says it” we wondered about the rituals to be followed. Are we to chant it before all meals? Are we to chant it when we are not speaking other matters? Are we to chant only it, and utter no other word? Now, they tell us that this slogan needs more lebensraum: “We want the whole world to chant […]”. The unmistakable suggestion of the lust for the ‘whole world’ is alarming. The right to remain silent is necessarily implicit in the right to speak freely. We will say what we want to. We will not say what you want us to.

If we do not fight back and write back we will have achieved the subcontinental version of the ceremonial society of the Nazi Germany. Leni Riefenstahl’s propaganda film Triumph of the Will captured the primitive society that Germany became: all men and women content to repeat the words of the Führer, the drill, the uniforms, the marches – a people celebrating the sacrifice of all their faculties in order to take the modern form of the ceremonial society. The repugnant drill that is carried out in the play grounds by the men in khaki shorts could soon be all of us, our everyday.

Our regression into the ongoing discourse about who chanted which profane slogans and which sacred slogans all must chant is the desiccation of language and the withering of lives in the subcontinent.

It is not late to enquire into the ways in which we are letting the whole of language slip into quotes and become ceremonialised. Centuries of ceremonial mnemonics practiced as knowledge in the subcontinent, and the ritualised social order were repeated in the postcolonial decades too. It is not merely a discriminatory education system that sent the poor and the lower castes to entirely inadequate schools, colleges and universities; it is also the ‘rote learning’ system which enforces conformity into all young minds: the outdated syllabi, the doctrinal history books, absence of philosophy in the schools, question papers that repeated for decades, the answer sheets in circulation since the first questions appeared, the class rooms that demanded obedience and ceremonial repetitions. That is, we systematically inhibited the possibility of free thinking people and aggressive writers.

The aggression of language

It is this pathology that makes us play our politics through quotes today when we demand our freedoms by invoking the long gone greats: we do not have to quote Tagore to say that any kind of nationalism is a mass movement for psychopaths; we do not need Gandhi to speak about the illegitimacy of having a sedition law; we won’t be helped by quoting Bhagat Singh to demand the freedom to be irreligious. There are many things spoken by the great figures of the past that are entirely disagreeable to us. And, as we can see, these authoritative quotes are worth nothing today. We need to write our own revolutionary statements.

Without the aggression of language that breaks free of every holy land, we risk being embargoed into a ceremonial colony, even geographically, in the subcontinent. The writer is someone who breaks through the ceremonial idolatry and the desiccated surfaces of a tired language in order to bring new matter, be she the practitioner of fiction, history or philosophy. The writer, free of the quotation marks, gives something new to contest. She may inaugurate a new polemics as when Hannah Arendt reported on the trial of the Nazi, Adolf Eichmann. He may obtain for us a new region in language, as when Eduardo Galeano brought politics and the tragic into football writing. He may speak of the unspeakable, as when the French philosopher Sartre wrote about the French involvement in the Holocaust. She may draw new lines of demarcation, as when Ada Byron wrote the first computer program.

A writer represents the aggression of language, someone who gives new matter for the inverted commas to swaddle, as new points of departure for the others. The writer is the step leader for lightning to strike. Rohith Vemula’s final message is our step leader, and it contains the following words: “I always wanted to be a writer”. The measure of the writer is the terror she inspires in the ceremonial orders of power. Each writer brings into language a new style of aggression. When Perumal Murugan wrote, “Writer Perumal Murugan is dead”, he practiced the style of proscription – declaring the secession of his language from fascism. He left his statement to us as an augury as dreadful as that of a land where nature withdraws into aridness. There is another style of the transmutation: when our writers condemned the state for its intolerance, the honours and awards bestowed by it became shingles, which they threw back. Today, we are in need of all our writers, the writer in all of us. We are in need of lightning strikes. So that we can write, grinding our teeth: Back off!

Divya Dwivedi and Shaj Mohan are philosophers based in the subcontinent.