Confusing signals seem to be coming out of Delhi about dealing with Naga rebel groups. One even has a bounty on his head 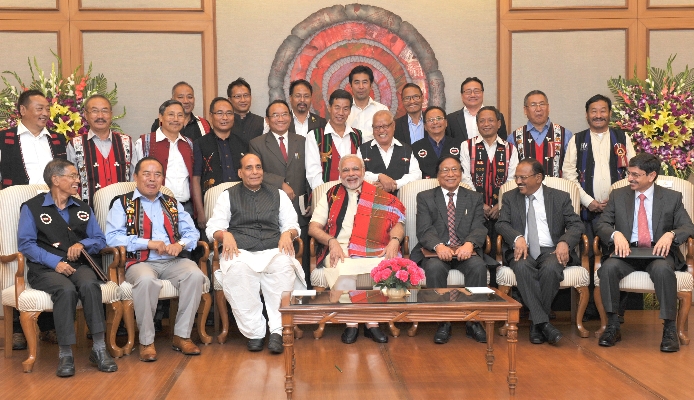 File:Prime Minister Narendra Modi at the signing of a historic peace accord between the Government of India and Nationalist Socialist Council of Nagaland (NSCN). Photo Uploaded by Co9man

A month and a half ago, on August 3, the Narendra Modi Government surprised people by organizing a media event to declare the reaching of an ‘agreement’ with the Isak-Muivah faction of the National Socialist Council of Nagaland (NSCN-IM). That didn’t lead to much euphoria, although the Naga insurrection has been on for almost six decades. That is because till now, very few people, except perhaps the signatories, are aware of the contents of that ‘agreement’.

That, however, is not the story. The story is that different wings or arms of the Union Government appear to be working at cross-purposes following the ‘deal’, raising a question mark on whether it would at all be easy to sign the real Naga peace accord in the coming days.

While the Prime Minister’s Office (PMO), represented by the Naga peace interlocutor R. N. Ravi, is giving an impression that it was keen on restoring permanent peace in the Naga areas, and was, therefore, interested in talking to all other Naga rebel groups, including the NSCN (Khaplang), the National Investigation Agency (NIA), a Union Home Ministry outfit, has announced a bounty on the head of NSCN-K chief S. S. Khaplang, and another of its top leaders, Nikki Sumi. Meanwhile, the Assam Rifles, a paramilitary force, also under the Union Home Ministry, has stepped up its offensive against the NSCN-K, killing seven suspected cadres of the group near Pangsha in Nagaland’s Tuensang district on August 29.

It is important to look at the timeline of events in Nagaland and Manipur in the past six weeks. Following the August 3 ‘agreement’ with the NSCN-IM, an influential section of the Naga civil society voiced the opinion that it would be prudent to try and get the other major Naga rebel group, the NSCN-K, back into the peace process. The NSCN-K had revoked its 14-year-long ceasefire with New Delhi following differences with the Government. The Centre made no efforts to prevent the abrogation of the truce, triggering speculations on whether the Government had actually been trying to sideline the group because it is headed by Khaplang, a Burmese Naga. New Delhi was apparently also not comfortable with the fact that the NSCN-K had entered into a truce with the Myanmar Government.

Despite this, as public opinion grew in favour of lasting peace in the Naga areas, the Centre gave out indications it was prepared to rethink. So, when the Naga Mothers’ Association (NMA), an influential women’s civil society group, volunteered to visit Myanmar to meet with the NSCN-K leaders to try and convince them to rejoin the peace process, interlocutor Ravi, who is the Chairman of the Joint Intelligence Committee, seemed to have no problems. The four-member NMA delegation, headed by Rosemary Dzuvichu, a leading academic, was making preparations for the visit on August 31 when the Assam Rifles stepped up vigil in the Pangsha area in Tuensang district, leading to a shootout where 7 suspected NSCN-K cadres were killed. The atmosphere was vitiated but the NMA delegation, nevertheless, walked across unhindered to Myanmar on August 31. They held talks with senior NSCN-K leaders although Khaplang himself was possibly in Yangon, undergoing treatment.

After their return, the NMA said the NSCN-K was not averse to resuming a ceasefire with New Delhi and said the outfit was neither in favour of nor against the recently signed ‘agreement’ with the NSCN-IM. During the meeting, the NMA leaders had appealed to the NSCN-K to renew the ceasefire saying armed confrontations and counter killings had affected the Nagas in general. The delegation stressed on the need for peaceful dialogue and urged the NSCN-K not to recruit children. The NSCN-K leaders assured the delegation their views would be conveyed to their Chairman Khaplang.

As groups continued to speculate on the content of the August 3 ‘agreement’, interlocutor Ravi arrived in Manipur on September 10 to speak to civil society groups and the State Government. Groups representing the Meiteis, the state’s largest community, told Ravi in one voice that Manipur’s territorial integrity should not be compromised, meaning there should not be any dismemberment of the state as part of the final accord with the Naga rebel groups. Doubts still remain, with some suggesting that the deal eventually could result in the creation of a separate territory-less administrative structure for the Nagas living in the region (Nagaland, Manipur, Assam and Arunachal Pradesh). Of course, the Centre may agree to give the Nagas an ‘emblem’ for official use, unlike a separate flag as in Jammu & Kashmir.

Just as possibilities were being discussed and debated in the region, the NIA sprung a surprise, almost on the day Ravi arrived in Manipur, by announcing a reward of Rs 7 lakh on the head of the 75-year-old NSCN-K chief Khaplang, and another Rs 10 lakh on the head of Niki Sumi, another top leader of the outfit. The NIA declared Khaplang and Niki Sumi, head of the outfit’s armed wing, ‘wanted terrorists’ for being associated with attacks on soldiers in Kohima and later in Manipur’s Chandel district on June 4 where 18 troopers were killed. The NIA notice said: ‘They were closely associated with the decision to attack Assam Rifles personnel.’ The notice added: ‘Any person from the public giving any reliable information about the whereabouts of these hardcore terrorists leading to their arrest will be rewarded with money.’

The situation is certainly hazy and the road to peace in Naga ‘country’ is still full of spikes. It is difficult to figure out how New Delhi proposes to tread on the path of peace in the coming days, with bounties on the heads of some rebel chieftains. Perhaps Delhi has a secret plan which only a few are aware of. It is hoped the Union Home Ministry is not caught napping this time, unlike on August 3, when it had no clue about an ‘agreement’.

(The writer is a political commentator and Executive Director of the Centre for Development & Peace Studies, Guwahati))