Many in the Congress think that if the party scores a close victory in Rajasthan, Ashok Gehlot would be Rahul's first preference as chief ministerial candidate. 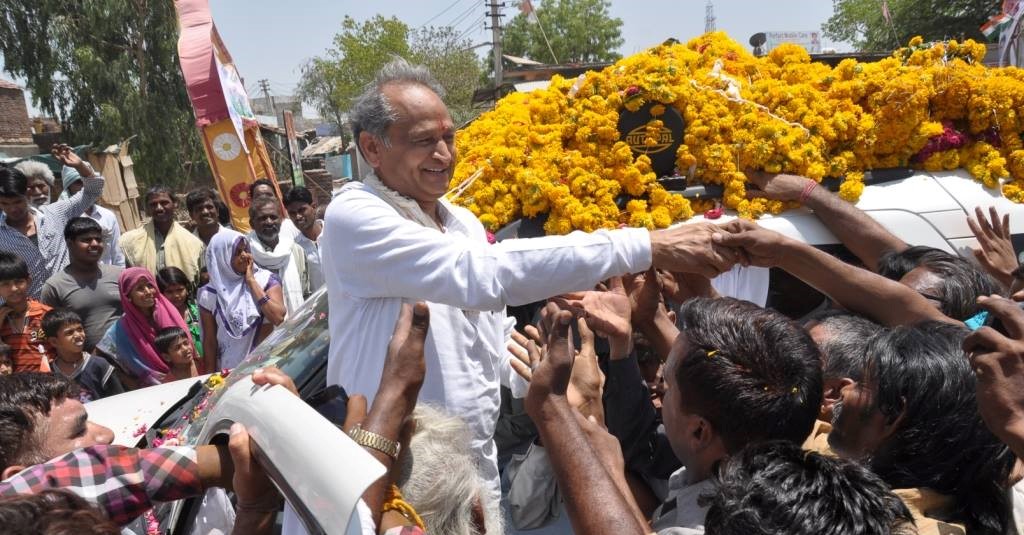 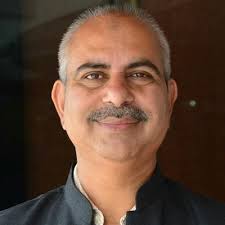 Bliss was in that dawn to be alive
But to be young was very heaven.

Ashok Gehlot got a lucky break in the Congress during early 1970s when Indira Gandhi’s son, Sanjay, was calling the shots. Sanjay was promoting another Gehlot, Janardhan, a wrester who had humbled a mighty Bhairon Singh Shekhawat in 1972 from Gandhi Nagar in Jaipur. As luck would have it, Sanjay lost affection for giant killer Janardhan Gehlot, a Kshatriya, and his cronies quickly replaced him with another Gehlot from the Mali (gardener) community. Ashok was made National Student Union of India (NSUI) head of Rajasthan in a very special way when a biker carried his letter of appointment from Delhi to Jaipur.

Hailing from a magician’s family, Ashok Gehlot was initially called a “gilli billi” in Sanjay Congress circles. He was affable, deeply religious and practised several Gandhian ways of life. A teetotaler, Gehlot believes in eating only satvik meal and avoids eating anything after sunset till dawn.

Not much is known about one of the most powerful men in Rahul Gandhi’s Congress today except that Gehlot’s father, Babu Laxman Singh Daksh, was a famous magician who travelled across the country to perform. In his childhood days, Ashok too travelled with his father as an assistant and performed tricks, leaving spectators rather spellbound. A few years ago, Ashok had told an interviewer, “I would have been a magician if I had never entered politics. I always loved social work and learning magic tricks. In future, too, I might not get a chance to become a magician, but magic is still in my soul.” Though he does not admit it, Ashok is said to have performed magic tricks before a young Rahul and Priyanka Gandhi in the presence of Indira Gandhi.

Some feel the credit of spotting Ashok Gehlot should be given to Indira as she was one of first to have met him in the North Eastern region engulfed by huge refugee problem. Gehlot, then 20, was invited to join politics by none other than the then Prime Minister Indira Gandhi. He attended an AICC session in Indore, where he also met Sanjay Gandhi. Since then, there has been no looking back.

At the Indore session, Priyaranjan Dasmunshi was elected Youth Congress president and would remain the only elected Youth Congress chief. This was an era when Indira and Sanjay wanted the Youth Congress to take on the Right-wing Jan Sangh and its allied organisations. This was also a golden age of grooming young leaders in the Congress. Sanjay, otherwise criticised for his haughtiness and acting as an extra constitutional authority throughout the 21-month long Emergency, set up leadership factory in the party, producing a range of party leaders who called the shots in the grand old party throughout the 1980s, 1990s and 2000s. Some of them, like Ashok, Kamal Nath, Digvijaya, Ambika Soni, Vyalar Ravi, A.K. Antony, Ghulam Nabi Azad, Mukul Wasnik B.K. Hariprasad are still around. 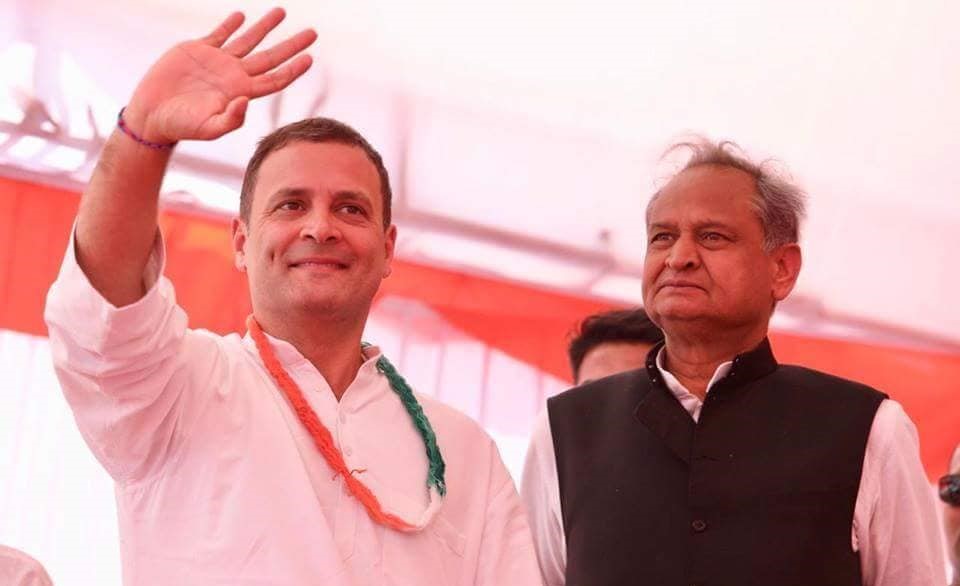 Ashok Gehlot could be Rahul Gandhi’s preference for chief ministerial candidate if Congress to power in Rajasthan. Credit: Facebook/Ashok Gehlot

Under Sanjay, these leaders were given multiple tasks such as slum demolition, family planning, adult literacy drive, each-one-plant-one tree environmental scheme, anti-dowry campaign, to getting physical with government employees. It was Sanjay’s idea of “Hands-on-Governance”, where Youth Congress leaders and workers were directed to publicly beat up errant bureaucrats. There were many instances of overenthusiastic and arrogant Youth Congress leaders taking out shoes on government servants.

Gehlot, however, remained low keyed in Rajasthan and Delhi until Rajiv Gandhi entered the political scene after Sanjay’s death. Rajiv recommended him as a junior minister in Indira’s council of ministers. Pitted against the mighty Haridev Joshi and Shiv Charan Mathur, Ashok became Rajiv’s eyes and ears in Rajasthan. Political grapevine has it that Ashok had played a pivotal role in Joshi’s sacking as chief minister of Rajasthan when Rajiv decided to hold a cabinet meeting inside the Sariska National Park, 170 km from the national capital. As per Rajiv’s instructions, state ministers were not supposed to use official cars to meet Rajiv. Rajiv was himself driving an SUV which was reportedly signalled by a local traffic constable to turn right, instead of going straight. The seemingly innocent error (some claim to be magician Ashok’s handiwork) proved costly for Joshi as the diversion led to a spot where hundreds of official cars belonging to state ministers, officials etc.) were parked. Rajasthan was undergoing severe drought then, and Rajiv, battling on many fronts, had tried to send a signal of austerity.

Rajiv’s public rebuke did not did not go down well with Joshi, who sulked and boycotted a lunch. The absence of host chief minister was noticed by Joshi’s friend, P.V. Narasimha Rao, then HRD minister in Rajiv’s cabinet. Rao’s attempts to act as a peacemaker proved futile; within a month, Joshi was replaced by Mathur.

Around this time, Gehlot was in Delhi, heading the tourism ministry. His earlier stint as a junior minister in civil aviation had given him a profile of sorts as he followed Rajiv’s vision to the hilt. Many laurels followed. Gehlot was credited with setting up the Delhi Haat opposite the INA market that continues to serve as an ethnic bazaar bringing artisans and their handicrafts from all over the country in direct contact with buyers. His tenure as union minister in charge of textiles under P.V. Narasimha Rao was considered memorable for having put many innovative ideas into practice. 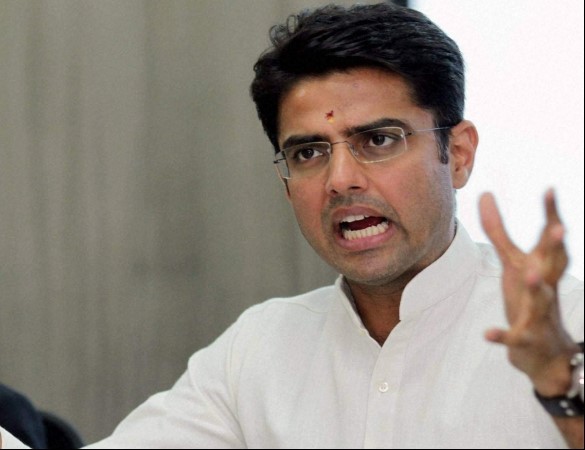 Sachin Pilot (in picture) is expected to accord all importance to his contender and two-time chief minister, Ashok Gehlot. Credit: PTI

His proximity to Rajiv Gandhi perhaps helped Gehlot strike a rapport with Sonia and subsequently with Rahul, who has so far been striking a fine balance between his buddy Sachin Pilot (currently head of Rajasthan Congress) and Gehlot, an uncle-like figure. Rahul’s presence ensures that Ashok does not perform any gilli-billi trick to upstage Sachin; at the same time, Sachin is expected to accord all importance to two-time chief minister. There is no dearth of Congressmen who think that if the Congress scores a narrow-margin victory in Rajasthan, Gehlot would be Rahul’s first preference as chief minister.

Gehlot’s simplicity and easy manners have helped him grow immensely. At one point, Ashok would not occupy a chair before party bigwigs like Ahmad Patel and Ghulam Nabi Azad. Today, he is at par with them and is perhaps as powerful an office-bearer at 24, Akbar Road. For a majority of party leaders and colleagues, Gehlot has remained a man of good intentions who retained common touch with friends despite walking the corridors of power in Delhi and Jaipur.

At his home town, Jodhpur, Gehlot’s idea of relaxation is to sit outside a PCO and do gupshup with all and sundry. The seasoned politician has an ability to laugh at himself. Once he had murmured something to a youth, which sounded something like “tamatar khao” while what he meant was “kama kar khao.” When this joke was narrated to Gehlot, he had a hearty laugh.

Rasheed Kidwai is a visiting Fellow at the Observer Research Foundation. His upcoming book “Neta Abhineta – Star power in Indian Politics (Hachette ) has gone to press.