The Congress-JD(S) Tie up and the Karnataka Governor's Dilemma

With a complicated situation at hand, all eyes are on Vajubhai Vala even as speculation is rife about the Karnataka governor being under pressure from the BJP’s high command.

New Delhi: Karnataka governor Vajubhai Vala must be a troubled man at this point of time. While the Congress-Janata Dal(Secular) leaders met him this evening to stake their claim to form the government, there are also reports that he has assured B.S. Yeddyurappa a week’s time to prove his majority. Although no official confirmation came regarding the latter, speculation is rife about Vala being under pressure from the BJP’s high command.

Vala, an old Rashtriya Swayamsevak Sangh (RSS) hand and an extremely popular Gujarat BJP leader, is also known to have vacated his Rajkot seat when Narendra Modi was parachuted from New Delhi to take over as the state’s chief minister in 2001.

The BJP has objected to the post-poll alliance between the Congress and JD(S). However, its critics on social media pointed out similar instances in Goa, Manipur and Meghalaya where the BJP conjured up post-poll alliances despite not ending up as the single-largest party. 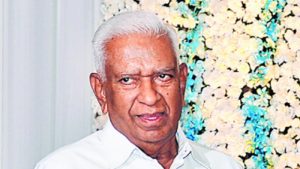 The Congress sprung into action soon after it was clear that BJP would not cross the half-way mark of 113 seats. Unlike in Goa, Manipur and Meghalaya, its leaders were prompt enough to open doors for the JD(S). It had a clear plan as it offered, without hesitation, the chief minister’s chair to H.D. Kumaraswami.

Congress leader Ghulam Nabi Azad told the media that the alliance is sealed and they will present the letters of support to the governor. This should have put the matter to rest but if the governor has actually given Yeddyurappa a week’s time to manoeuvre around, it is most likely to open the political stage for horse-trading, which the governor should have prevented, if propriety of his office is taken into account.

Yeddyurappa has already rejected the legitimacy of the alliance and called it as an attempt by the two parties to enter the corridors of power through the “back door”.

Amit Shah portrayed the mandate as a decisive defeat for the Congress, which was reduced from 122 to 78. He alleged that the Congress indulged in divisive strategies to create a wedge among caste and religious groups.

It appeared that the BJP president was setting the stage for the forthcoming post-electoral battle for power in the state. Even Modi claimed that the results were “an extraordinary victory for the party”. He added that that he wanted to assure the people of Karnataka that the state won’t be left out in BJP’s development agenda and India’s Vikas Yatra. This seems like enough indication that the saffron party is not going to give up easily in this bitter tussle.

On the other hand, Congress spokesperson Randeep Singh Surjewala said that the governor should invite the coalition to form a government as it has the numbers. He also cited the examples of Goa, Manipur and Meghalaya to justify his case.

However, BJP insiders told The Wire that the party leadership was contemplating to press for the S.R Bommai judgement, which required a government to prove its majority on the floor of the house, to be considered. That way, BJP thinks it can work a way around to prove its majority through engineering abstentions or absence of some of the opposition MLAs. “This is important as BJP is not in a position to prove its majority unless it gets the support of the JD (S). There are only two members – one independent and the other from Karnataka Pragnyavantha Janatha Party – who have reportedly extended their support to the coalition,” one mid-level BJP leader in Mangalore told The Wire.

However, many legal experts think that former president K.R. Narayanan’s formula that the government can prove its majority only if they have the letters of support.

Eminent jurist gave mixed responses to this. Senior advocate and former attorney-general of India Soli Sorabjee told the media that the single-largest party should be invited and only if it fails to prove its majority, the governor should call the coalition.

Subhash Kashyap, constitutional expert, told News18 that the governor can invite the any party or coalition which he thinks is most well-placed to form the government, which should then prove its majority on the floor of the house.

But most agreed that if any coalition can show assured support of majority of MLAs, it is the most well-placed to form the government.

Meanwhile, JD(S) spokesperson Danish Ali spoke to the media and confirmed his total support to the Congress’s offer. He said his party’s commitment to secularism makes the Congress their first choice as partner. “I know that the BJP high-command has instructed the governor to call Yeddyurappa first to form the government. But we will stick by our decision. Most of the media portrayed us as the B-team of the BJP during the campaign and we kept rebutting it. Now, we will show that we have always been opposed to BJP and its divisive strategies. Our leader H.D.Deve Gowda has been constantly saying this.”

With a complicated situation at hand, all eyes are on the governor and the decision he takes in the next few days.