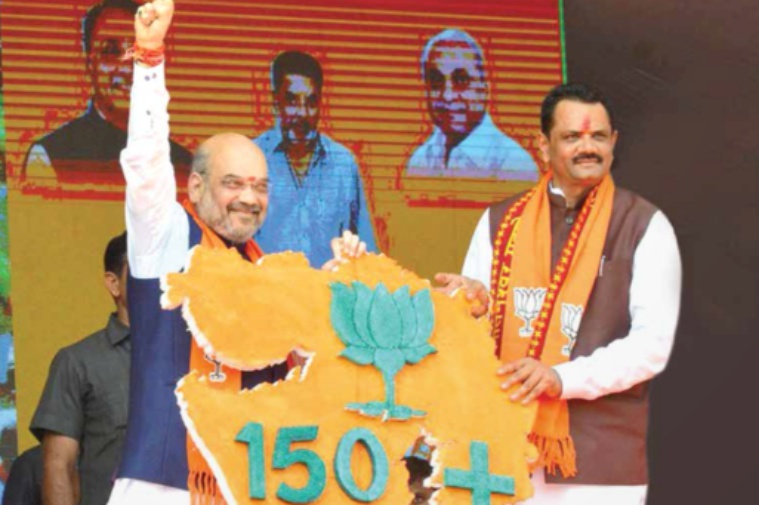 The BJP had boasted of a ‘Mission 150-plus’ for the Gujarat 2017 elections. Credit: Kamal Sandesh

A win is a win and a defeat is a defeat; but, sometimes, a win is less than a victory and a defeat is not exactly an ignominious loss. The Bharatiya Janata Party (BJP) has notched up a technical majority in the Gujarat assembly, but it is difficult to see the final tally as a political knockout. The complete and total supremacy that the BJP leadership claimed for itself has all too obviously been denied to it by the Gujarati voter; if anything, some kind of equilibrium stands introduced in the national polity.

Sure enough, there will be celebrations in the saffron camp all over the country; the union cabinet ministers and the chief ministers have already been trotted out to sing hosannas to the prime minister’s charisma and to the magic of the party leadership’s managerial skills. The “cadres” and the karyakartas will not suffer any loss of morale and may even feel reconfirmed in their current ahankari (arrogant) mood.

The Indian polity stands changed and redefined the day after the Gujarat count. To begin with, the PM had chosen to convert the Gujarat vote into a referendum on himself, on his leadership at the national level and on his ownership over Gujarat. It had already been noted, with considerable sadness, by seasoned analysts that the tone and tenor of the PM’s prolonged acerbic and demagogic campaign did not exactly add lustre to his institutional reputation. When Mani Shankar Aiyar allowed himself to use that unfortunate word – neech – about the PM, it was immediately seized upon and declared as an insult to the 6.2 crore Gujaratis. The Gujarat voters were exhorted to give a befitting, thundering reply to this insult. Has that smear been wiped out sufficiently? Does the final tally reinforce the rumours of the PM’s undiminished charisma? Why could the voters not even add one more seat to the 2012 tally, just to keep up the illusion of allure?

The BJP had set a benchmark for itself and the voters. It had demanded total annihilation of the opposition. It had cockily boasted of a ‘Mission 150-plus’. What is an analyst to make of the final figure?

It needs to be noted that the Gujarati electorate did not reward its very own son of the soil with the same kind of abundantly rich mandate that the voters in Uttar Pradesh were only too happy to part with, just six months ago. In Uttar Pradesh, the BJP was battling two entrenched political parties – billeted in very, very powerful social formations – the Bahujan Samaj Party and the Samajwadi Party; both had strong regional/local faces as potential chief ministers and campaigners: the formidable Behen Mayawati and the young, clean-face Akhilesh Yadav were no pushovers; and, on top of that, the BJP had been out of power in Uttar Pradesh for more than a decade, and did not have at its command ground-level resourcefulness in ample measure. Yet, the voters heard the PM’s siren call to arms and rewarded the BJP with a two-thirds majority. The Hindutva juggernaut seemed unstoppable. What the Modi salesmanship had lost in Bihar in December, 2015, was more than recouped in Uttar Pradesh in 2017.

It was now Gujarat’s turn to put the icing on the cake that had been baked in Uttar Pradesh’s Hindu-backyard. But, lo and behold, our very own Gujarat voter has turned out to be a rather cussed customer, even flirting with treachery. The final tally is a poor return on all the attention and affection the PM had lavished on his state.

It definitely shows the BJP political management in unflattering light. After two decades of uninterrupted rule, the BJP controls almost every single lever of power and patronage and the officialdom habitually errs in its favour; and, in the end, it had to depend upon its financial clout to make the people vote for it. On the other hand, the Congress had no Gujarat-level leader, so to speak. Instead, the Congress had only Rahul Gandhi to rely on for working the crowds and for providing fodder to news television channels’ nightly inquisition.

And then, this time, Narendra Modi was seeking a vote from the Gujarat voter as a prime minister; he needed a shot in the arm from his fellow Gujaratis to burnish his national and international image; he had even voiced a suspicion that, perhaps, Pakistan was trying to interfere in the Gujarat vote. Still, the Gujarati voter remained remarkably unmoved and returned a rather paltry majority. A thundering reaffirmation has so conspicuously been withheld.

It is only natural that the Gujarat vote would be dissected beyond Gandhinagar, at home and abroad. The opposition forces and groups have good reason to take comfort from the fact that the BJP has not been able to inflict a crushing defeat on its rivals in the PM’s own home state. The Congress, in particular, should recover its voice and demand and insist on the rolling-back of institutional infirmities that have come to pockmark our republic.

Those who man our democratic institutions – the judiciary and all other constitutional bodies and – need not always trim their sails according to the ruling party’s whims and fancies. In particular, the Election Commission of India would need to do some introspection and rediscover its institutional karma.

There will be a new government in Gandhinagar, which will need to recognise and appreciate the nature of unrest and turmoil in the Gujarati samaj. The frayed fabric has to be repaired. To the extent the poll result cannot be taken as a ringing endorsement of the much-touted “Gujarat model of development”, it is imperative to ensure that the social insurgency of last two years does not get further aggravated. A new generation of young leaders has made its presence felt and it will be up to the BJP leadership to show intellectual imagination and political generosity to accommodate the new rebels as stakeholders.

The Congress seems to have recovered its mojo. Most of its state-level leaders have fallen by the wayside, but it has shown an unusual self-assurance to remain unintimidated; at no stage, did it appear willing to give a free pass to the Modi forces. More than that, its leadership seems to have brushed up its rusted skills of managing contradictions among conflicting social constituencies.

Above all, the sense of invincibility that the BJP had aimed to manufacture for itself about its 2019 claims stands punctured. Practitioners of the politics of hubris have handed a yellow card. The electoral democracy’s curative power to correct political arrogance stands confirmed. Not a bad day in the life of the republic.