The CPI-M is Caught in a False Debate

Instead of debating an alliance with the Congress, Left parties should come to terms with the limits of governmental politics. 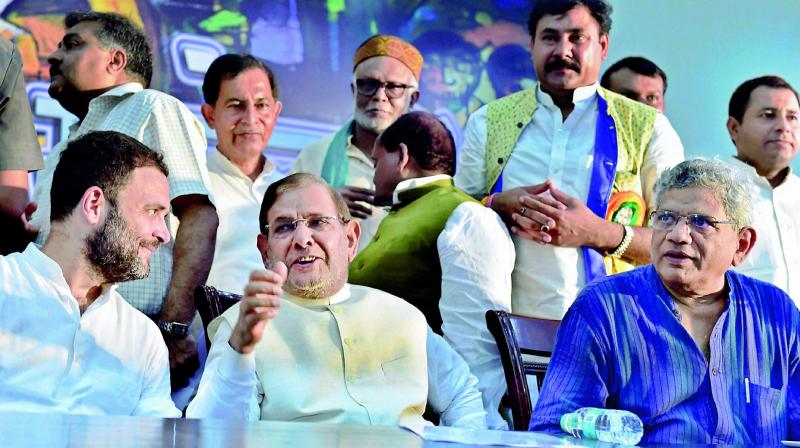 This is a debate that has been eternally going on within the Left, particularly within the Communist Party of India-Marxist (CP-M). The central issue is whether or not the Left should join hands with the Congress  – and even electorally align with the party.

The Left has also debated the possibility of a so-called ‘third front’ – who should be its partners, who should lead it and whether it will be just an electoral or an all-weather front. The timing of the front’s launching has also been a bone of contention. Of late, this debate has greatly discomfited the CPI(M). So much so that the party has begun to interpret every national phenomenon within the binary of “going it alone” or “aligning with the Congress.”

No doubt, this is a simplified presentation of the two streams of thought underlining the complex debate. But it is better to first delineate the political question within a less complex framework. This helps us understand the debate’s essential points. Only then are we in a position to draw appropriate conclusions.

To begin with, one of the pertinent issues has to do with identifying friends and enemies. The Left’s first task, in this context, is to consider the question in terms of class – in other words – to decide which classes to align with, which to neutralise and which to fight against. Parties do not always define their possible electoral alliances in class terms, which makes political transactions complex. Yet, a broad understanding of class dimension remains important in political strategy and tact.

Second, removed from strategic considerations, alliances can still be tactical. Even tactical alliances, it can be argued, must have some long-term significance. The Left otherwise will keep surviving on the engine of its day-to-day politics.

Back in the 1960s, two successive splits in the then United Communist Party of India catalysed a debate, boiling down to two fundamental points: deciding the path of social transformation and strategy of alliances or fronts.

A section of communists decimated themselves by pursuing a one-sided understanding of what the “path” of social transformation should be. Another section of communists, in search of a “progressive bourgeoisie,” aligned with the Congress when India was passing through dark times, permanently crippling itself by surrendering its political autonomy.

Yet another section, the major section within the Left bloc, took to capturing parliamentary power in select states, perceiving it to be the path to nationwide transformation. The successful strategy endured for almost 30 years. Yet, even as the Left got unprecedented national attention in formal politics, the limits of such state-centred governmental politics began to surface in this period. 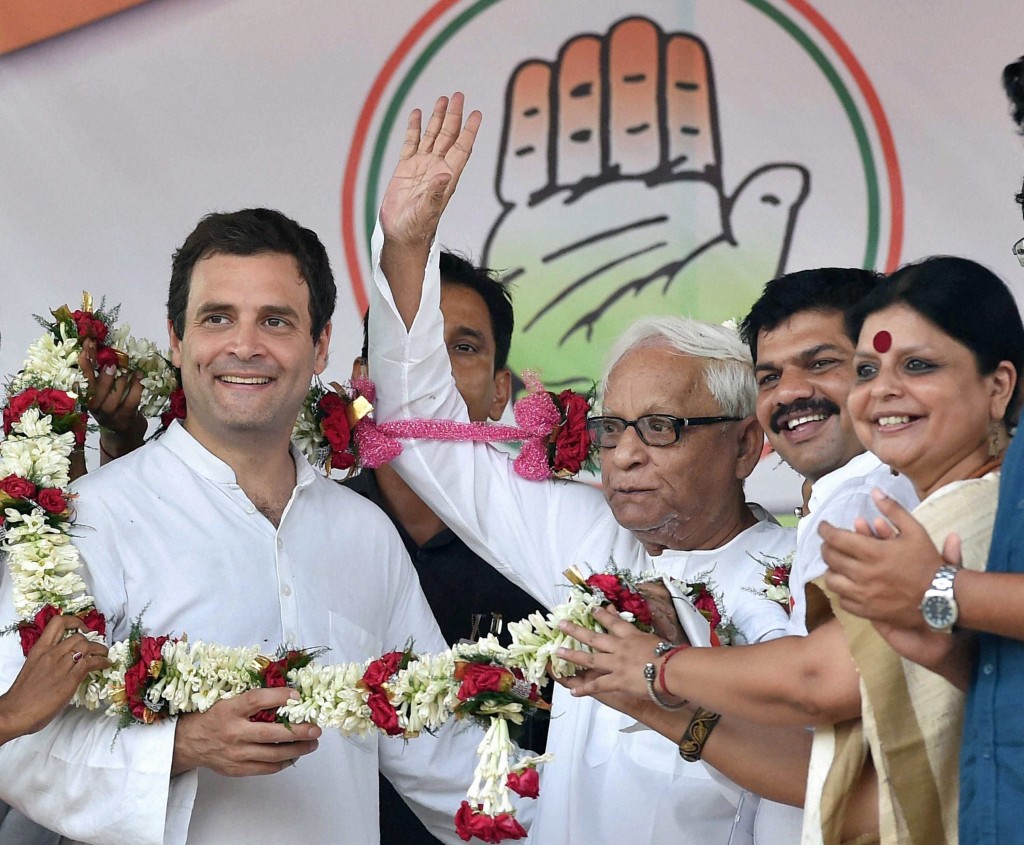 A spent force, the Congress is in no position to mount an ideological challenge to the BJP. File photo of Congress leader Rahul Gandhi and former West Bengal Chief Minister Buddhadeb Bhattacharjee. Credit: PTI

The CPI(M)’s success in one state, let’s say West Bengal, did not inspire any similar transformative politics in Bihar or Odisha. Governments regularly changed in Kerala. In Tripura, the Left remained in power first by suppressing militancy and then failing to meet the grievances of the indigenous people. The CPI(M)’s strength crystalised around the Bengali population, presiding over a largely de facto partitioned society. At the same time, the poison fruits of the monopoly of governmental power for an uninterrupted period corroded the soul of the Left.

Meanwhile, changes in the economy transformed society. The middle classes changed. As did the bourgeoisie and the compositions of the working class and the peasantry. Finally, it was during this period that new forms of nationwide agitations, struggles emerged. The new local sites of resistance spawned fresh political formations which were tagged as “national” formations. It became clear that the Left’s old orientation had lost much of its relevance, to the logic of new age.

Keeping this background in mind, the first thing that strikes one is the pettiness of the question animating the present Left leadership. Daily governmental and parliamentary politics have distorted the Left’s vision. Instead of coming up with new slogans, formations, class alliances and fresh repertoires of struggles, the debate has collapsed into one of Left’s electoral strategy vis-à-vis the Congress. The argument that the absence of an alliance with the Congress hurt the Left in Tripura, is facile. A spent force, the Congress is in no position to mount an ideological challenge to the BJP.

One can say that wages of daily governmentality have cost the Left dear in Tripura. In the absence of a new vision and agenda, the Left can now only conclude that non-payment of dearness allowance to government employees and failure to revise salaries, have contributed to its defeat. Within this framework, women, indigenous peasantry and farm workers, mostly non-salaried, are not the constituencies that are occupying the Left’s attention. The interest of middle-class employees is deciding the Left’s agenda.

This also means that the Left turned a blind eye to the economic processes by which the Bengali middle-class settlers appropriated land and property of indigenous people, how they enriched themselves by making use of legal and benami means. The indigenous tribal peasantry continued to be destitute. Such experiences showed that once the Left comes to power, it loses sight of its ideology and commitment to the very classes it is meant to serve and strengthen on every front – economic, educational and social.

The Left could have taken a leaf or two out of Mamata Banerjee’s book. I know the mention of Mamata’s name will anger a section of readers. But this is not about analysing her persona. This is about assessing her in light of the relevance of populism in Left politics. The limits of populism on the economic front are evident. But its political possibilities are enormous. A populist imagination can save politics at a time when Left parties are confronting the limits of governmental power and the ever-present danger of stagnation. One can say that wages of daily governmentality has cost the Left dear in Tripura. In the absence of a new vision and agenda, the Left can now only conclude that non-payment of dearness allowance and failure to revise salaries contributed to its defeat. Credit: PTI

Left politics of governmentality is bound to fail unless people continue to be with the government, sympathise with its limits, and become stakeholders in policies. Tripura elections bear out this premise. Ultimately, it means the Left has to have a healthy disrespect as well as scepticism for government, to leave it free to innovate without being constrained by its governmental existence.

The question is, will the Left with its inherent prejudice against populism, ever come to terms with the historical limits of its strategy of seizing governmental power and winning elections endlessly? And in this context, isn’t the debate – whether or not to align with Congress – a false one?

The Northeast is already in the process of transforming from an insurgency-driven to a monetary region. It’s interesting to note here that in the 2013 assembly elections, the BJP lost its deposit in 49 out of 50 seats it contested. Five years ahead of that, in 2008, the party had lost its deposit in all of the 49 seats it had contested. In 2018, it has formed government in the very same state. The Left, however, is showing no signs of waking up. The CPI(M) has put the onus of defeat on the BJP’s “massive deployment of money and other resources to influence the elections”, and thus being able to “consolidate all the anti-Left votes virtually appropriating the erstwhile main opposition party, the Congress.”

And even though the CPI (M) politbureau in the same statement has assured “the people of Tripura that it will continue to champion the cause of all sections of the working people and uphold tribal-non tribal unity”, that unity has long since been over following the massive para-military repression of the late 1990s.

The evolution of a monetarist economy has been facilitated by the Look East and Act East Policy of Indian state and capitalist development. Many suggested that Tripura was an exception to the neoliberal game underway in the region. Some suggested that Tripura was secure within its boundaries, protected from the usual travails of the region and hence was suitable for liberal Left-style politics. Others averred that by opening up to Bangladesh and having its own version of Look East, Tripura had avoided neoliberal aggrandisement. Both explanations have proved futile. On the other side, while connecting to other regions, states, and areas, Tripura has to look inside itself, devise new strategies of logistical development such as building roads, more social infrastructure, more transport networks, cooperatives, etc. that would strengthen the indigenous people’s economy.

One may be sad to see the end of the long Left rule, may regret that a model chief minister has been thrown out. That once a symbol of tribal struggles for emancipation, Manik Sarkar now stands humiliated, like the statue of Lenin in Belonia was desecrated by hoodlums. Yet, there is need to introspect deeply and not be swayed by emotions. That was not the way of Lenin, who was a master of recognising mistakes and changing course even midstream of a political and economic project.