The Antinomies of George Fernandes

Cynics thought it was the love of power that kept Fernandes in the National Democratic Alliance; yet his undying hostility to the Congress of Indira Gandhi may have been as important. Unlike a certain New York Times columnist, I do not normally write about (or draw large conclusions from) conversations with taxi drivers. But for this column I must make an exception.

The cabbie was an Iranian, who had come to India as a student in the 1970s. However, he was more interested in politics than scholarship, and was an active member of a group called Fedayee Guerilla, which sought to replace the monarchical regime then in place in Iran with a socialist alternative.

In the late 1970s, George Fernandes was a Union minister in New Delhi. His Lutyens bungalow was a refuge for radicals of all kinds. Tibetan students opposed to Chinese imperialism hung out there. So did Shan and Karen rebels in exile from the military dictatorship in Burma. The Iranian fidayeen now driving me in Toronto had also found his way to Fernandes’ house, where he ate free meals and dreamt of proletarian revolution.

In February 1979, a revolution took place in Iran. However, this was a revolution of the Right, and this Iranian socialist in exile detested Ayatollah Khomeini even more than he detested Shah Reza Pahlavi. Later in 1979, a delegation from the new government in Teheran came on a visit to New Delhi. The Left-wing Iranian students met them at Palam Airport with slogans and placards. Accused of violating their visa status, they were arrested and taken off to prison.

The jail the Iranian fidayeen were in was dark and dingy. The food was awful; the sanitation, worse. To their great good luck, however, their friend and fellow socialist, the minister in the Union government, got to know of their plight. One morning George Fernandes arrived in jail, supplied a personal guarantee and had the students shifted to the outhouse of his Lutyens bungalow.

As 1979 gave way to 1980, a new government came to power in New Delhi, and Fernandes lost whatever influence with the officials he had previously commanded. He now told his proteges to find a way out of India, where they could no longer be protected.

Thereafter, by means he was understandably reluctant to reveal, this former fidayeen from Iran made his way to Canada, where he now drove a taxi. But wherever he was and whatever he did, George Fernandes would forever be his father. For Fernandes had provided this Iranian student food and company in New Delhi, and later done him a favour infinitely more substantial; namely, saved him from an indefinite term as an undertrial in an Indian prison. 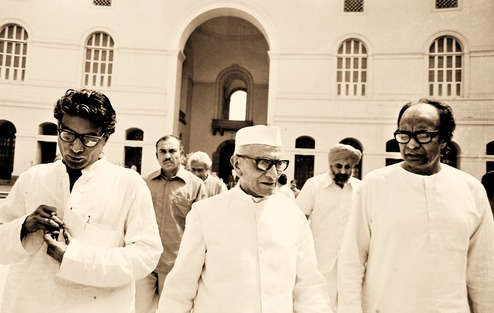 A stand-in father to students of many nationalities, Fernandes had once intended to become a Father of the Catholic Church, a priest curing souls. Born in Mangalore in 1930, the eldest of six brothers, his devout parents had him enrolled in a seminary in Bangalore.

After a year learning Latin, the boy ran away and returned to his home town, where he began organising hotel workers. However, he soon shifted base once more, to Bombay. His early years in the city are cloaked in legend and mystery; he may (or may not) have slept on pavements, and may (or may not) have cadged free food from Udupi cafes, by speaking to their owners in Konkani.

Also read: George Fernandes: The Descent from Idealism to Vanity

Shortly after moving to the city, Fernandes attached himself to Placid D’Mello, a prominent trade union leader in Mumbai. D’Mello and Fernandes were both socialists, engaged in a lively rivalry with the Communists who had previously dominated the trade union movement. Having grown up in Mangalore speaking Konkani, Tulu and Kannada, Fernandes had a natural flair for languages. He was soon speaking Marathi and Hindi with fluency as well, solidifying his base among the working class.

The first general election I myself remember took place in 1967, when I was eight. It was this election that brought George Fernandes to national attention.

The news of his defeating S.K. Patil reached me in distant Dehradun, as it would have reached little boys and girls in Dhanbad and Dhenkanal as well. For Patil had been the fundraiser for the Congress in the time of Jawaharlal Nehru, Lal Bahadur Shastri and now Indira Gandhi. He was their line, or lifeline, to the richest industrialists of the richest city in India.

The later landmarks of Fernandes’s colourful career are well known: his leadership of the railway strike of 1974; his courage during the Emergency; his election from Muzaffarpur in Bihar in 1977 (while still in prison); his expulsion of IBM and Coca Cola as industries minister in the Janata government (the former inadvertently paving the way for the development of an indigenous computer hardware industry, as documented in Dinesh C. Sharma’s book The Long Revolution); his praising his Prime Minister Morarji Desai one day and throwing him under the bus the next; his short stint as railway minister in the V.P. Singh government (when he promoted the Konkan Railway); his splitting of the Janata Parivar and taking one wing into the embrace of the communal BJP; his years as defence minister in the Atal Bihari Vajpayee government (where he endeared himself to the troops on the frontline by his unselfconsciously simple lifestyle); the shameful apologias issued by him and his colleague Jaya Jaitly on behalf of the Gujarat government after the pogroms of 2002; his long last illness, when a man who always had so much to say was tragically stricken by silence.

The high point of Fernandes’s career was his struggle against the Emergency; the low point, his embrace of the sectarian politics of L.K. Advani and Narendra Modi, and, even worse, of the Vishwa Hindu Parishad and the Bajrang Dal. These high and low points may be connected.

Cynics thought it was the love of power that kept Fernandes in the National Democratic Alliance; yet his undying hostility to the Congress of Indira Gandhi may have been as important.

Shortly after the Emergency was imposed, his brother Michael, a trade union leader in Bangalore, was arrested. However, George evaded capture; so successfully that on one visit to Bangalore he met his youngest brother, the physicist Richard Fernandes, disguised as a Sikh, fooling the police and (until he opened his mouth) fooling Richard too.

Indira was enraged by the failure to arrest Fernandes. On her instructions, the Karnataka government picked up his brother Lawrence, an apolitical printer, and tortured him so brutally that he was broken for life. Other friends of George, such as the actor Snehalata Reddy, were also put in prison; Snehalata died of an illness picked up in jail.

Fernandes had, early in his career, picked up the anti-Congressism of his political guru Ram Manohar Lohia. The victimisation of his family and friends during the Emergency consolidated his hatred of Indira and her party. To keep Indira’s family out of power at all costs became his mantra; even if it meant supporting those who would butcher Muslims and Christians in the name of their Hindu rashtra.

Fernandes was sui generis, one of a kind, the sort of neta who may never appear on these shores again. In this age of identity politics, it is hard to imagine a Konkani-speaking Catholic from Mangalore winning Lok Sabha elections in Mumbai or in Bihar. Or of an Indian politician so without arrogance and affectation that bus drivers and railway signalmen dealt with him on equal terms, as a brother, and whom Tibetan and Iranian students venerated as a father.

It is these characteristics, so egalitarian and so non-sectarian, that make it so hard to forgive Fernandes for the unfortunate moral compromises he made in his last years in active politics.